How Young Europeans Show Their Brand Love (with Logos) Last week we told you about the top brands young consumers in Western Europe say they feel a sense of community around (and why). Over a third of young Europeans say they’re a fan of a brand and part of their community, and the majority that are part of a brand community have purchased something because of that community, presenting a massive opportunity for brands to leverage the growing power of brand fandoms.

But how are young consumers showing their brand love? It turns out branded apparel is one of the top ways: 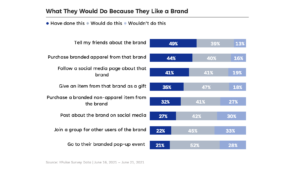 Brands have so many opportunities to connect with their young fans. Young European consumers are at least interested in everything from following a social media page about a brand they like to posting about a brand on social media.  The interaction they’ve done the least—go to a branded pop-up event—is the one they’re most interested in, with over half of young consumers in Western Europe saying they are interested in attending a pop-up hosted by a brand they like. In our recent Shopping and Retail report, we also found that pop-ups are one of the top shopping experiences they’re interested in, and it’s something we’re seeing more of in Western Europe. Earlier this summer, for example, KFC opened a pop-up hotel in London, complete with a “chick-flicks” movie room, a KFC arcade machine and a chicken concierge service. McDonald’s, meanwhile, opened a limited-time “walk-thru” billboard in London, which served McFlurrys out of a window to commuters, German alcohol brand Jägermeister opened a pop-up coffee house to promote its new Jager-infused cold brew coffee, and  “buy now, pay later” platform Klarna launched an experiential #ad awareness pop-up on a doubledecker bus, featuring a sequined swing set, a giant talking clamshell, complimentary manicures, “picturesque floral bouquets,” and influencer cameos.

But one of the biggest ways young Europeans are showing their brand love is by purchasing branded items—nearly a third of 13-39-year-olds Europeans have purchased a non-apparel branded item from a brand they like and 41% say they would. Branded clothes are even bigger: nearly half have purchased branded apparel from a brand they like and another two in five say they are interested. In fact, logomania has been back for a while now, and young consumers are more than happy to rep their favorite brand’s logo:

Nearly half of young Europeans say they’ve purchased something prominently displaying their favorite brand’s logo, and another 28% say they would. And while the logos of Gen Z and Millennial fan-favorites like Supreme and Nike likely come to mind, logo love has gone far beyond the usual players. Food and bev brands have been launching clothing lines for a while now, for example, with some recent popular additions being German candy company Haribo’s branded Pumas, and German grocery store chain Aldi’s clothing line, “Aldimania,” which sold out in days. Spite, Oreo, and McDonald’s have also released merch lines that young consumers have snapped up, and not just because it’s ironic: 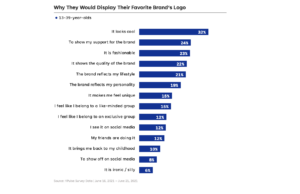 When we ask young Europeans who say they would display their favorite brand’s logo why they would, irony is at the bottom of the list, and the top reason is a simple one: because it looks cool. Looks are definitely a top priority, with “it’s fashionable” being the third top reason they’d display a logo. But nearly a quarter of young Europeans also say they would wear a logo to show a brand their support. Some 13-39-year-olds also say they’d display a brand’s logo because they like the feeling of belonging to a like-minded group, highlighting again that creating a sense of community is a key way for brands to make their customers fans.