In the lead up to the launch of Disney+ over a quarter of 13-37-year-olds told YPulse they planned to subscribe. On November 13th, the platform launched and 10 million people signed up for on the first day—outperforming expectations. If the internet is any indication, the majority were nostalgic Millennials who are binging the heck out of their ’90s favorites. Throwback ‘90s shows like Boy Meets World, Darkwing Duck, and Gargoyles all trended on social media as fans found them on the new platform.

Since the launch of the platform, Disney+ has continued to stay in the viral spotlight, with viewers signing up in droves and characters from their original shows becoming instantly-beloved. (The internet demanded Baby Yoda merch after falling in love with the little guy in The Mandalorian.) Though there have been mini-controversies and complaints, overall the love for the platform has been clear—and it’s also giving giving Disney a significant boost in affinity.

Every week, YPulse’s continuous youth brand tracker asks young consumers to assess their feelings on over 400 brands—so we’re continuously monitoring the ups and downs of their affinity for the biggest companies in CPG, QSR, fashion, media, entertainment, tech, and more who are targeting Gen Z and Millennials. Questions about whether a brand has a bright future, is cool, or is recommended to others, are examples of the diagnostics we use to determine a brands’ success among young consumers—and a brand’s Yscore aggregates all of these measures. We looked into Disney’s numbers to see what kind of impact their new SVOD was having on young consumers’ feelings.

In the weeks before the Disney+ launch, Disney’s Yscore was sitting in fairly consistently close to 42. In two weeks post-launch, that score increased 20%: 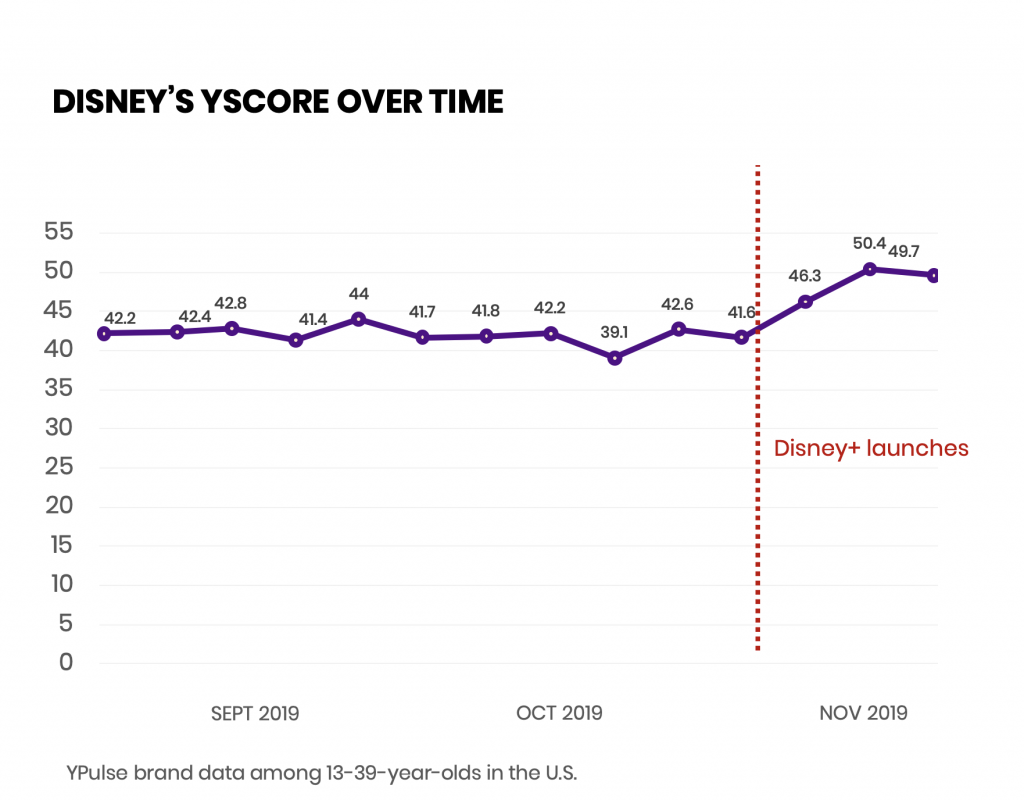 In the two weeks after the launch, Disney’s Yscore increased nearly 10 points, up to 50.4 the week of November 18th. It has barely dipped in the last week, indicating that the affinity boost could be long-lasting. Looking more closely at the diagnostics, the brand is performing especially well on the metrics for having a “bright future” and being “talked about.”

Meanwhile, the Yscore for Disney+ currently sits at 42.3, well about their industry average, and already on the course to beat out some major players in the space.

Of course, Disney has always had a strong brand relationship with Gen Z and Millennials, but the launch of Disney+ was still a risk for the brand. Now, it’s clear that it’s not only a success in its own right, but also having a nice halo effect for young consumers’ feelings about Disney as a whole.