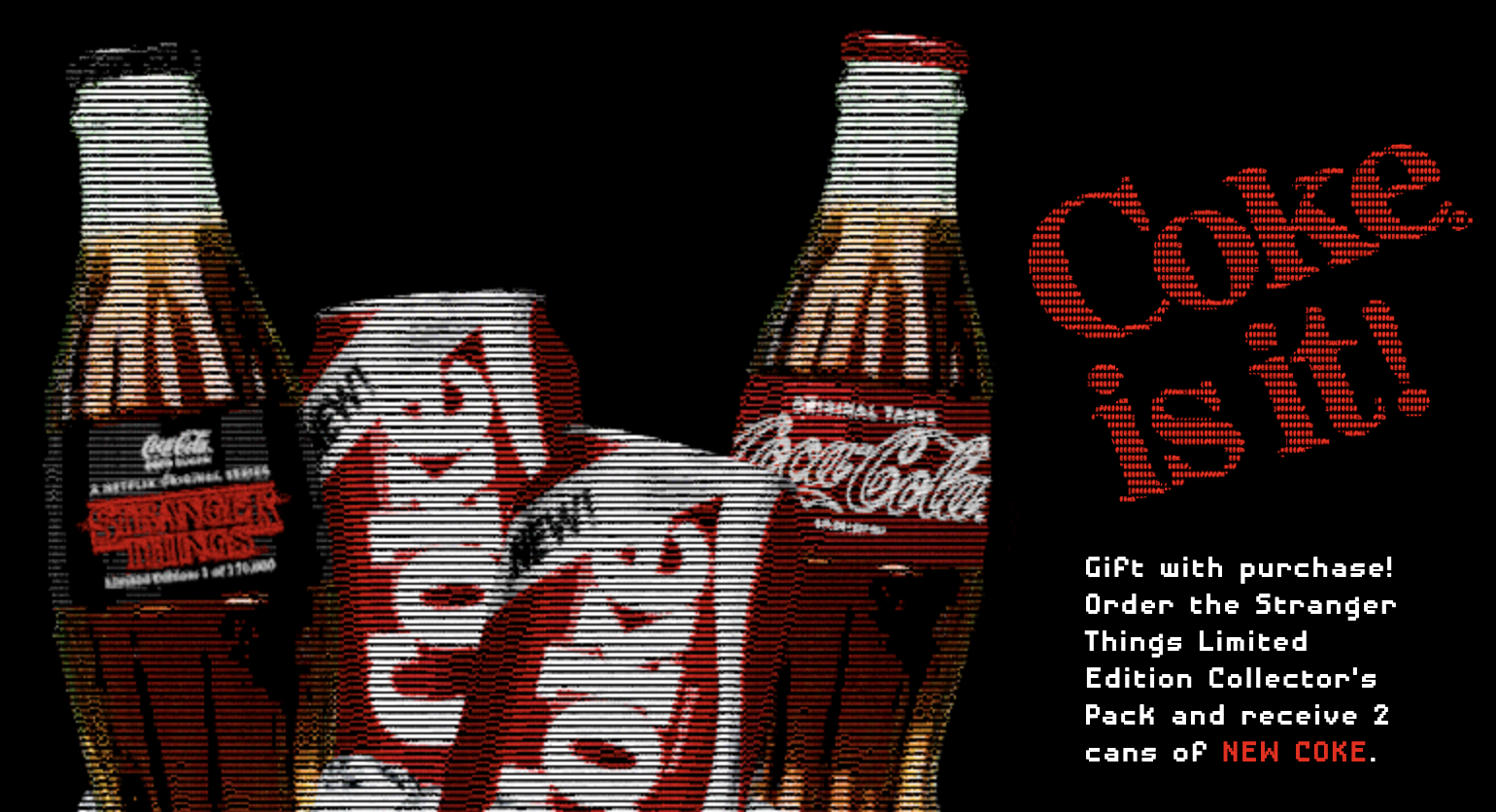 Will Netflix & Stranger Things give Coca-Cola an Eggo-like boost? We dug into our exclusive brand tracker data to compare both brands’ DNA…

Coca-Cola is getting a Stranger Things makeover—and they’re bringing back New Coke, one of their most infamous products, as a part of the partnership. The appropriately time-warped and pixelated New Coke site tells visitors that the brand is “taking you back to the summer of 1985, the heyday of hair bands, scrunchies, neon prints, and of course, New Coke” to celebrate the third season of the show. The return of the recipe is only available with the purchase of the New Coke and Stranger Things 1985 Limited Edition Collector’s Pack. But they didn’t stop with the return of New Coke and the limited-edition, show-themed bottles. New Coke and Stranger Things x Coke apparel is also for sale on the site. It’s a unique brand partnership—but how will it play out among young consumers, many of whom weren’t around for the original New Coke launch?

To evaluate what the Netflix and Coca-Cola partnership might yield for each brand, we tapped into our brand tracker to see what their unique brand DNA can tell us. Our exclusive, continuous youth brand tracker asks Gen Z and Millennials to score over 400 brands, assessing 16 core diagnostics we developed to determine a brands’ success among young consumers. Questions about whether a brand is cool, reflects diversity, supports causes, is recommended to others, and has a bright future are specific examples—and visualizing a brand’s strengths and weaknesses over our 16 diagnostic measures creates a unique map of their brand DNA. We can compare the brands that correlate strongest to each other in order to see which share a similar DNA, and which don’t. Here are the top brands that share a similar DNA to Netflix:

WHOSE BRAND DNA IS MOST SIMILAR TO NETFLIX?

Here we can see that Netflix shares a similar brand DNA with a range of brands, including (not surprisingly) Hulu, Amazon Prime Video, and HBO. Interestingly, they also share a similar map with top CPG brands like Oreo, Doritos, and Reese’s. These are all recurring favorites among young consumers. In fact, Netflix, Oreo, Doritos, and Reese’s all made the top 20 youth brand ranking in our recent YPulse Brand Report. Notably, we see that Coca-Cola doesn’t make the top ten list of similar brands to Netflix—and when we look at the brands that have similar DNA to Coca-Cola, the top 10 are all fellow CPG brands, with Pepsi, M&Ms, and Lay’s leading the list, a hint that they’re missing some cultural significance. Looking further into the data, Netflix is in the 90th percentile of its industry for “cool,” second only to Apple in Tech, Media, and Entertainment. On the other hand, Coca-Cola is in the 80th percentile among CPG brands, indicating that the partnership could give Coke a needed boost. Stranger Things is one of Gen Z and Millennials’ favorite TV shows, and young consumers have massive affinity for Netflix. Looking at brand DNA and diagnostic scores, it’s clear that teaming up with Netflix is a win for Coca-Cola, who currently isn’t on the same mind share level as the entertainment brand, even though other CPG brands are managing to score similarly.

Unexpected brand partnerships can work for multiple reasons, but often work best when one brand is putting a fun, new spin on another for a rarely-reached audience. For Coca-Cola, young consumers aren’t an easily-won group. We don’t need to get into the history of their struggles with Millennials and Gen Z, but they’ve been making investments in new brands that capitalize on trends like CBD-infused beverages and mocktails to try to appeal to generations that aren’t drinking soda. For them, a limited-time-only drink that leans on the caché of one of young consumers’ favorite TV shows is a rare opportunity to build demand around their most well-known product (or a version of it at least). The partnership is already proving a success: When it launched online on the 23rd, the site crashed from demand.

This isn’t the first time that Netflix (and Stranger Things in particular) has loaned their cool cred to another brand. The first season of the show featured Eggo prominently, and according to CNN, sales for the frozen waffles jumped 14% in the fourth quarter of 2017 and 9.4% in the first four months of 2018, only dropping between seasons. One Eggo executive explains that they “quickly leveraged the [resulting] consumer engagement” from the show, and it paid off.

We even saw the Stranger Things effect at work for the brand: Eggo made our top 10 list of Gen Z and Millennials’ favorite food brands last year. But notably, Coca-Cola didn’t make the top ranking for any age group—another indication that they could use the Netflix boost and that the Stranger Things tie-in is a smart marketing move. For Netflix, the New Coke story provides an authentic time-period touchpoint for Stranger Things. But if they’re interested in more partnerships in the future, some of the brands that share a similar DNA could make for a wise pairing.