These Are 10 of Gen Z & Millennials’ Favorite Food Brands 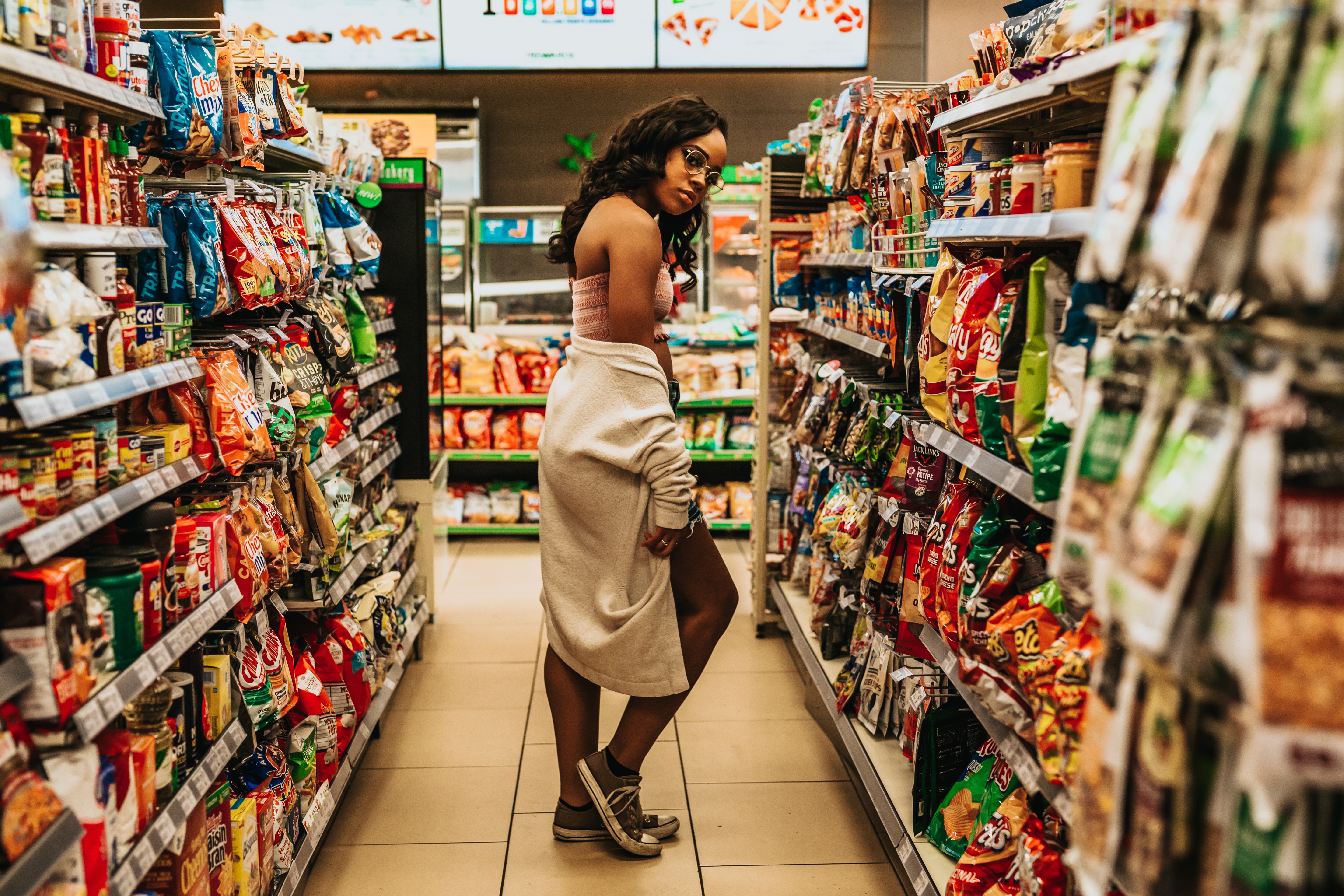 According to YPulse’s research, the majority of 18-35-year-olds are responsible for the grocery shopping in their households—and 88% of 13-17-year-olds say they have at least some say in the groceries that are purchased, even though they aren’t doing the shopping themselves. In other words, Gen Z and Millennials are the driving forces behind what ends up in grocery carts these days. So what are their favorite food brands? We checked in on our youth brand tracker to find out some of the top names.

YPulse’s youth brand tracker, which launched in January of this year, has collected over 43,000 interviews that tell us how young consumers feel about more than 300 brands, including which are their favorites. We’ve previously looked at the food brands that Gen Z and Millennials disagree on, but now we’re looking at the data to see which are their actual favorites. Here’s what we found: 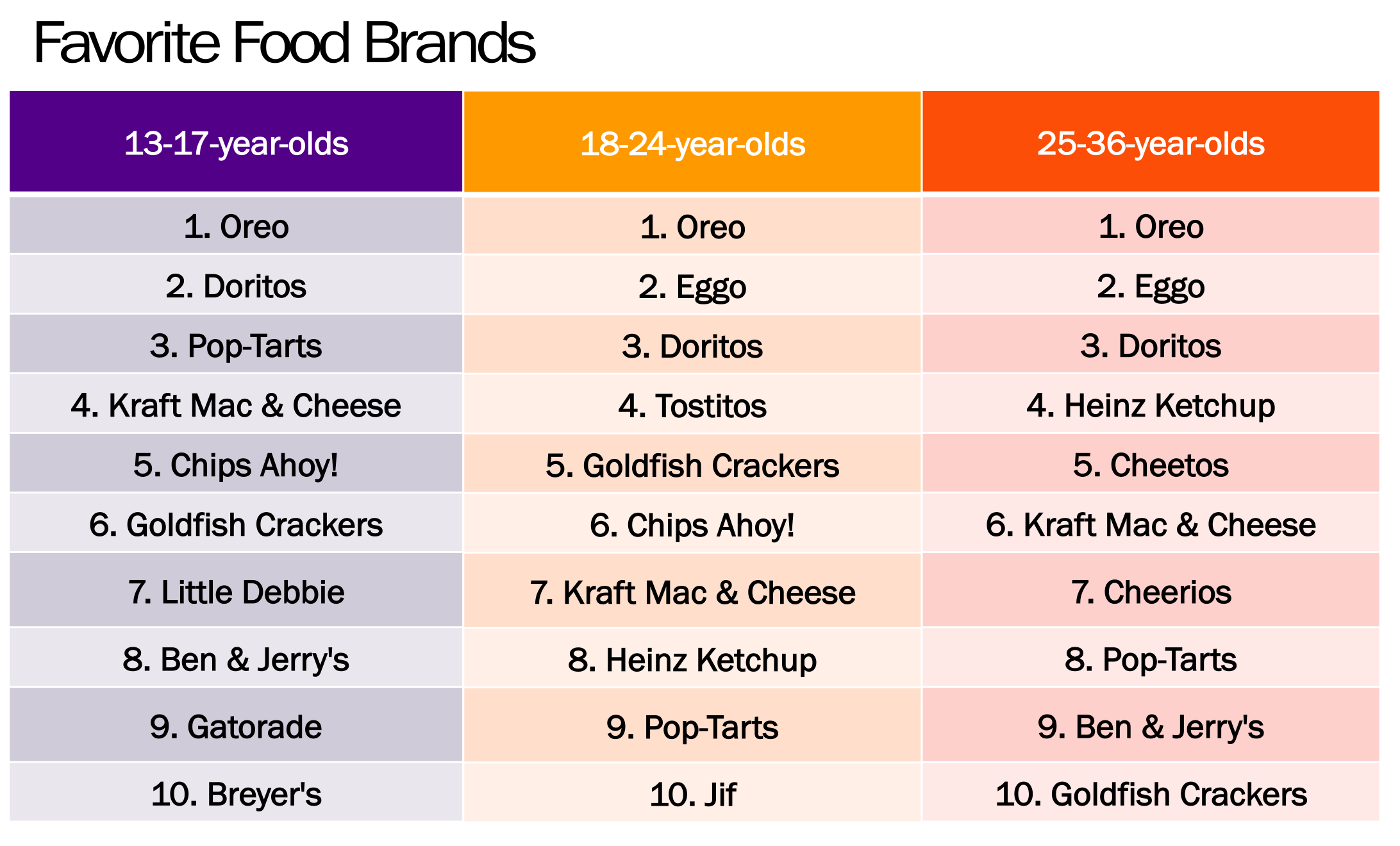 The YPulse youth brand tracker measures young consumers’ relationship with a brand based on a weighted six-point scale, ranging from “Never heard of this brand” to “This brand is one of my favorites.” These are the top food brands that received the response, “This brand is one of my favorites,” among those who are aware of the brand. The brands on these lists are among the 200+ brands included in the brand tracker as of publishing. Rankings are subject to change as more brands are added and removed.

Clearly, these generations consider indulgences among their favorites—not too surprising considering our data showing they only eat healthy-ish. Oreo tops the list among all three age groups, and Doritos lands in the top three for all groups as well. But among 18-24-year-olds and 25-36-year-olds, Eggo ranked second—and we’ll admit we think the brand is still benefiting from their Stranger Things boost.

The brand made sure to capitalize on their unexpected Stranger Things fame, seizing the marketing opportunity by tying themselves into Netflix’s Super Bowl ad, creating a special toaster for select fans, and swarming New York Comic Con with people dressed up like Eleven armed with “watch party kits” (aka “waffles and a microwavable syrup server”). To prep for the premiere of season two of the show, Eggo even sent out a fully-loaded food truck for the red-carpet premiere, going all out on social media to connect with fans. The efforts paid off: according to CNN Money, sales jumped 14% in the fourth quarter of 2017 and 9.4% for the first four months of 2018. Though Eggo sales are down in between seasons of Stranger Things, the positive feelings about the brand have remained.

Eggo did not rank among teens’ top favorite food brands here, indicating that the Stranger Things halo might not have worked on the youngest consumers (who might not have been watching the show as much). Teens were also more likely to say that Kraft Mac & Cheese, Little Debbie, Gatorade, and Breyer’s are favorites, compared to the older groups. Meanwhile, Cheetos, Cheerios, and Ben & Jerry’s are more popular among older Millennials than younger groups.

An important note: though these favorite brands do show that Millennials and Gen Z do still consider indulgent treats among their favorite food brands, that doesn’t mean that they’re eating them all the time. When we ask young consumers what aisle in the grocery store they usually buy products from, produce is the top response, with 66% saying they shop that aisle, versus just 36% who say the snack foods aisle.