How much has young consumers’ music listening changed? We compared their daily listening habits now to how they listened daily in 2016—and these 4 charts tell the story…

Almost seven in ten 13-36-year-olds tell us they listen to music all day long. That’s a serious opportunity to reach them directly, and we’ve said before that an all-out war for their ears has played out over the last few years. But who’s winning? Streaming platforms have not only taken on traditional sources like radio, but have battled (and continue to battle) one another as well. Spotify versus Pandora, the trials and tribulations of Tidal, all of the attempts at music streaming over at Apple—music streaming shakeups have been a news fixture. In September of 2018, radio company Sirius XM bought Pandora for $3 billion, in what the Wall Street Journal calls a “bet on streaming.”

In 2016, we let you know how young consumers were listening to music every day. Back then, 64% of 13-33-year-olds told us they listened to music all day long—today it’s increased (as mentioned above) to 69%, a shift that indicates the way they listen to music has likely changed as well. At the time, regular radio was still the top source for Millennials and teens’ daily music listening—but streaming was already catching up. Today, streaming services have been credited for some of the biggest shifts in the industry, from influencing the rise of hit songs to allowing young artists without representation to become Grammy award-winning superstars. Their success has been fueled by young consumers, who want the freedom to access the entire history of music whenever and wherever they want—but have they finally eclipsed radio in terms of their daily music listening? We’ve continued to ask young consumers how they’re listening to music, most recently in our September 2018 music survey. Here’s what we found out when we compared how young consumers listened to music daily in 2016, to how they’re listening daily today: 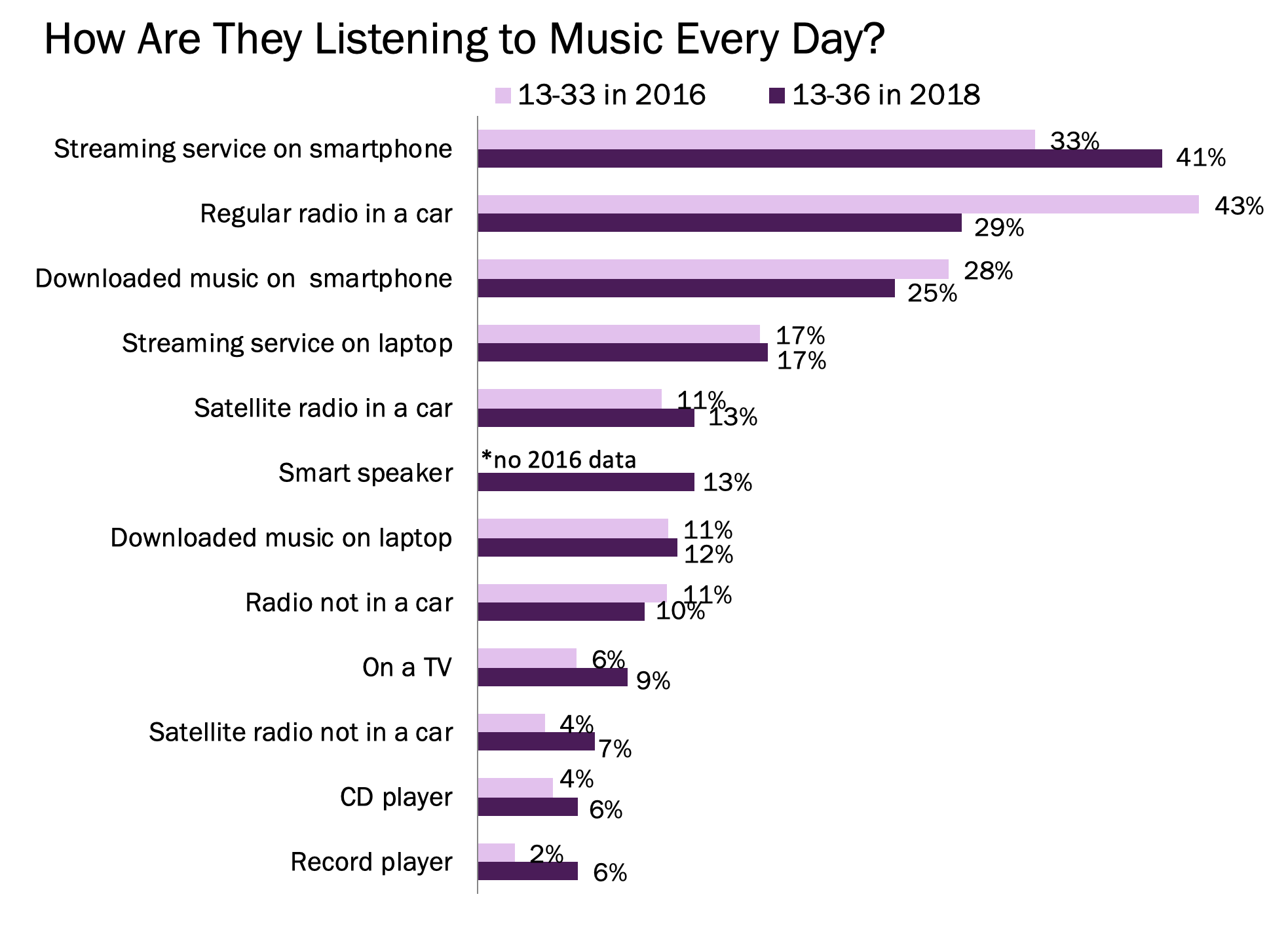 In the battle of radio versus streaming, the winner is clear. Today, streaming has overtaken radio as the dominant way that young consumers are listening to music every day. Radio in the car, once their top way of listening to music every day, has fallen from 43% in 2016 to 29% today among Gen Z and Millennial listeners, while streaming on their smartphone has increased from 33% in 2016 to 41% today.

As we wrote in our article What Spotify Knows About The Streaming Gen, their phones are being used as a main music source, with 71% listening to music on their phones daily in some capacity. Their music library is always with them, making music not just a pastime, but an important and ongoing part of their daily lives.

When we look at Gen Z teens’ listening in 2016 and today, we see how the youngest consumers have drastically shifted the landscape: 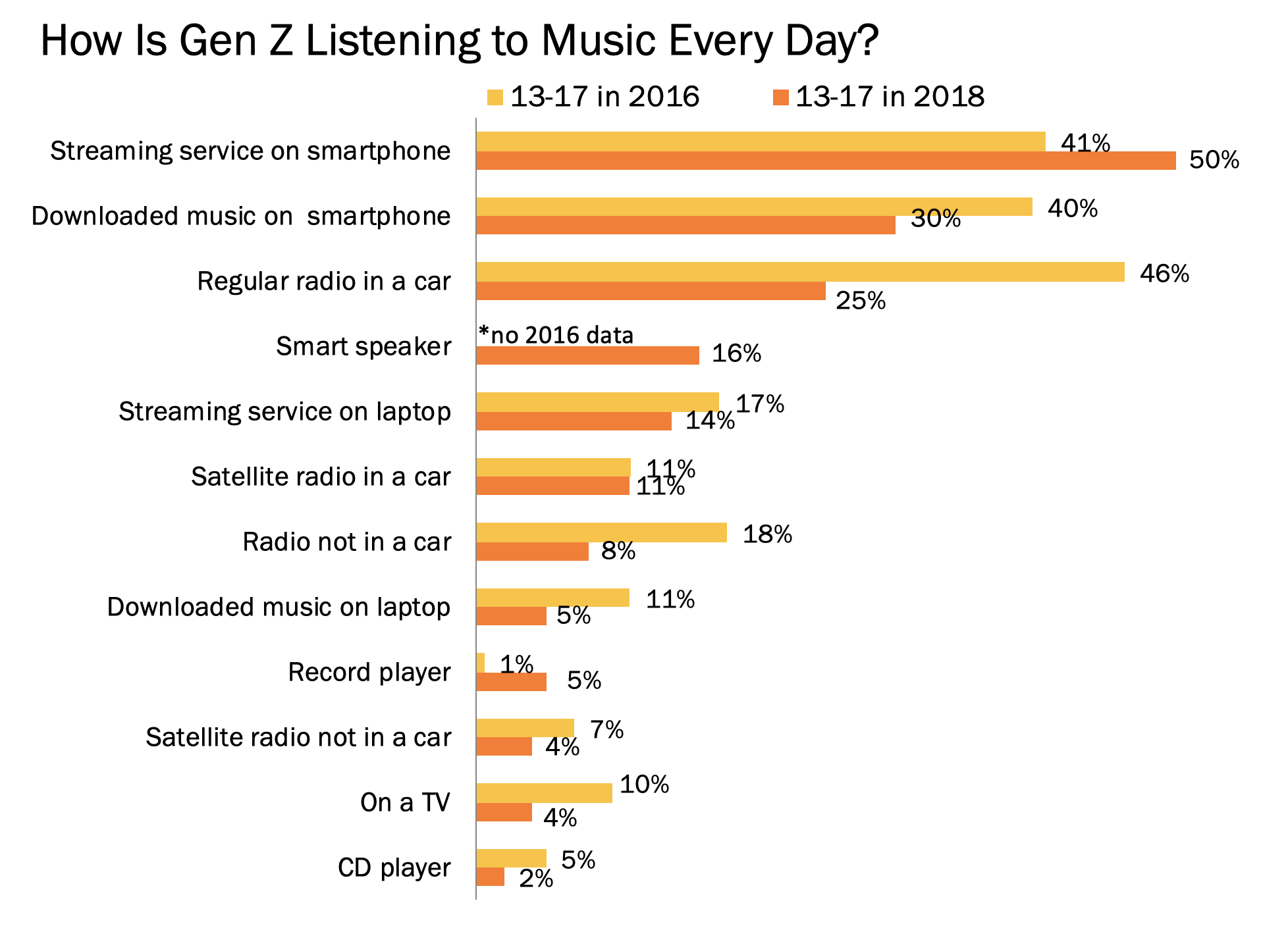 While almost half of teens in 2016 were listening to music on the car radio every day, that figure has dropped to just 25% today. Meanwhile, half of teens today are listening to streaming services on their smartphones daily. Among teens, daily radio listening out of the car has also decreased significantly, from 18% in 2016 to just 8% today. And, as is no surprise to the struggling music industry, their tendency to listen to downloaded music has also decreased, both on their phones and on their laptops. This is truly the generation that feels they don’t need to own any albums or even tracks, because streaming services are providing all the access they need.

Among Millennials, the shift to streaming has been clear as well: 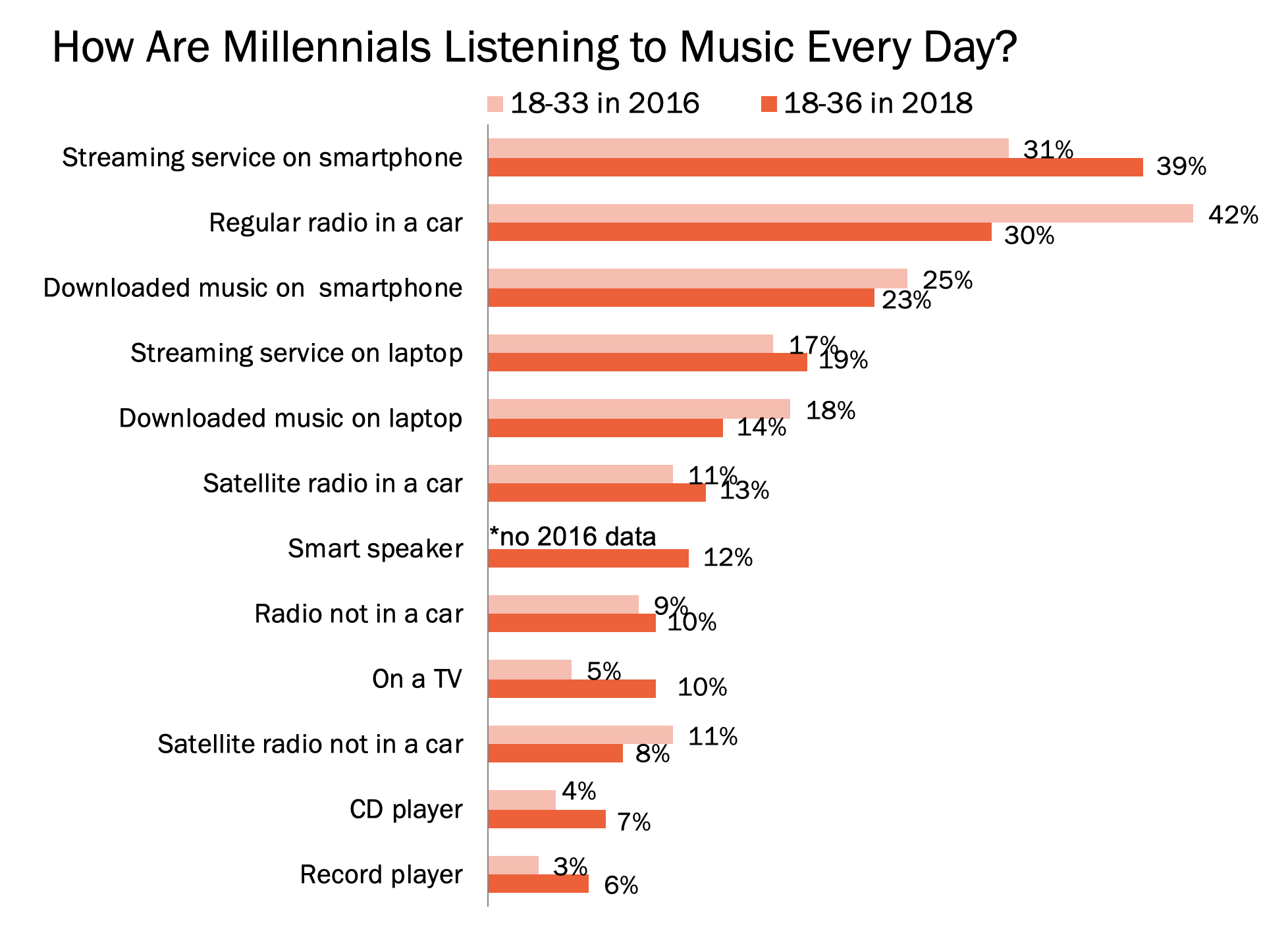 While compared to Gen Z, not as many Millennials are listening to music on streaming services daily (39% of Millennials versus 50% of Gen Z), we still see that they’ve moved their daily listening away from radio, with daily radio listening in the car dropping from 42% in 2016 to 30% today. A call-out here is that these are the consumers that are actually driving the most. While Gen Z might have their earbuds in listening to streaming services on their phones while mom or dad drive them around, Millennials are behind the wheel, and they’re still not turning on the radio as much as they once were. Instead, their Bluetooths are likely synced up to bring their streaming service preferences to them over their car speakers.

When we focus on how young consumers are listening to music now, some interesting differences between the generations are clear: 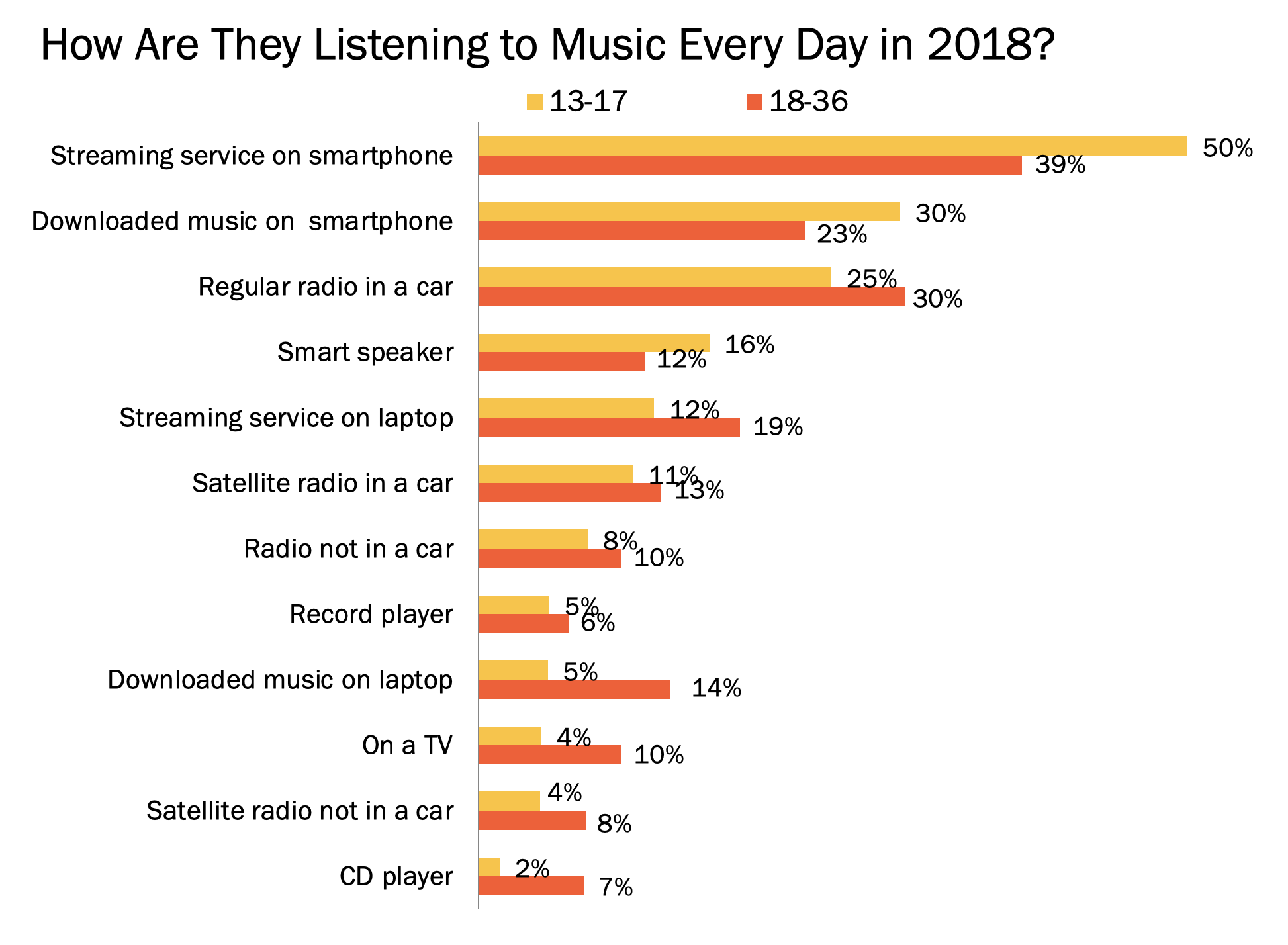 As indicated earlier, Gen Z is driving the use of streaming services on smartphones, and listening on smartphones in general. Millennials are more likely than the younger generation to listen to music daily on their laptops via streaming platform, and via downloaded collections.

Another interesting change from 2016 and difference between the generations is the addition of smart speakers: 13% of 18-36-year-olds and 16% of 13-17-year-olds report listening to music on a smart speaker every day, an indication that the shifts in their music listening aren’t over yet.