Millennials Are Smoking More Weed Than Ever 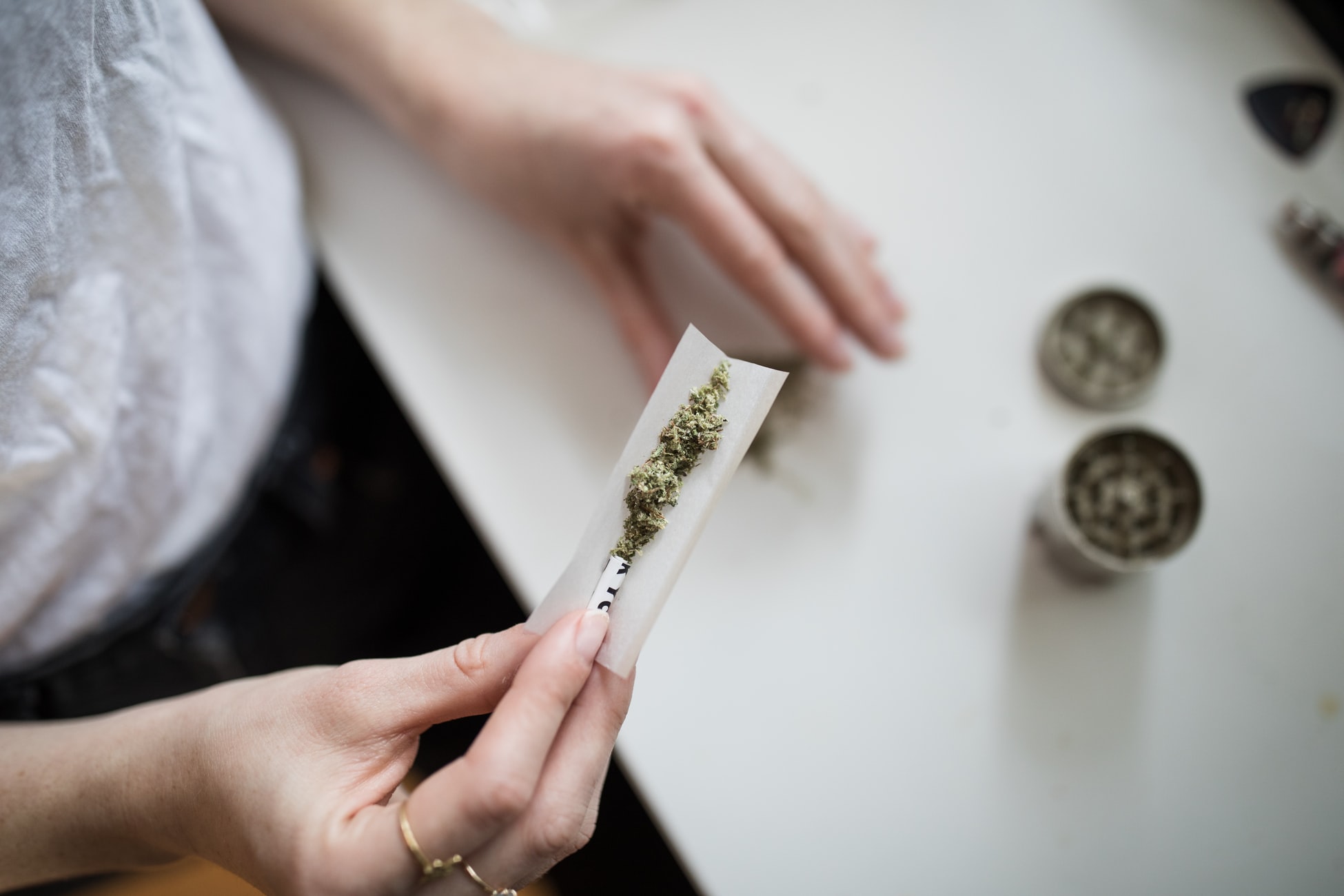 How much has Millennials’ marijuana use increased in the last few years? We take a deeper look…


Last month, the news of runner Sha’Carri Richardson’s ban from the Tokyo Olympics for using marijuana was met with swift backlash from her fans, opening up more discussion about the policies around weed and how it affects not only young athletes, but all young people in general. But Millennials certainly don’t agree with the WADA.

YPulse has told you for many years that Millennials’ interest in marijuana has been fueling the mainstreaming of weed, and they’ve been fueling the cannabis economy for years now. Our Cannabis Infusion trend report found that 48% of 18-36-year-olds think marijuana should be legalized for medicinal and recreational use, and certainly things have changed since then. More states have legalized the drug for recreational use, while weed has gotten a glam makeover for the newer generations.

But just how many Millennials actually use weed regularly? And what about the ever-buzzy CBD? YPulse’s recent survey on drugs and risky behaviors asked them all about it, and found that the number of Millennials who have tried marijuana has increased steadily in the last three years: 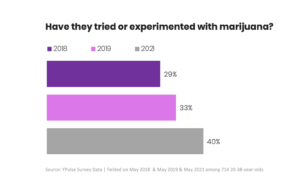 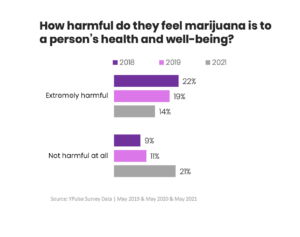 YPulse’s research shows that there is a clear, steady increase in marijuana consumption among 20-38-year-olds between 2018 and 2021. (The question was not asked in 2020—though other measures of marijuana use were taken, stay tuned.) Marijuana use has become more mainstream, and clearly more common among this generation. In this same time frame, the number of Millennials who believe that marijuana is extremely harmful to a person’s health and well-being has decreased from 22% to 14% and the number who feel it is not harmful at all has increased from 9% to 21%. The perception that marijuana is a harmful drug is going up in smoke (sorry, but we had to) and experimentation with it is increasing in tandem.

It’s not just experimentation, but regular use that has increased significantly in the last two years. During the pandemic, YPulse found that the number of Millennials who reported using marijuana daily increased significantly, from 3% in 2019 to 14% in 2020. The stress of COVID, and desire for escape is an obvious trigger. Now, we see that their daily use has not decreased: 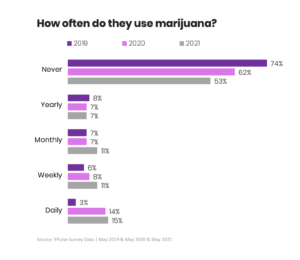 Daily use of marijuana has stayed steady between 2020 and 2021, and the number of who say they never use marijuana has decreased, from 62% to 53%. Marijuana/cannabis ranked as one of the things they couldn’t live without during quarantines, and also listed it as one of the things that is “like therapy” for them during this time. Smoking marijuana/weed also made the top 20 list of things young people say they’re doing for fun on an average night right now. Monthly and weekly use of marijuana has also increased over the last year.

And use of weed-related products, a.k.a. CBD, is also becoming more common among this group: 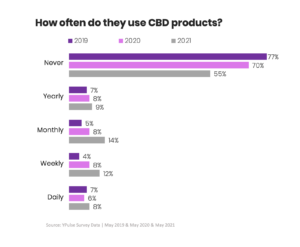 Millennials who say they never use CBD decreased drastically between 2020 and 2021. This generation’s increased use of marijuana and marijuana-infused products is creating a boom. During lockdowns, CBD sales were up, with brands like Recess reporting that their ecommerce sales increased 4x since the start of the pandemic. Adweek reports 2021 could be the “golden age” of cannabis marketing for brands. According to research from Leafly, Americans spent nearly $18 billion on legal weed in 2020—a 67% jump from the year before, while sales “more than doubled” year-over-year in nine states. The cannabis industry’s success during the pandemic has leaders and experts predicting that a “golden age” of weed marketing will take over this year.