From short-form videos to playing games together, these new dating apps are implementing features to keep young singles entertained…

COVID has certainly changed the way Gen Z and Millennials date. With fewer in-person interactions, many prospective daters used apps to pivot to video chatting and virtual dates. Match Group, which owns Tinder, OKCupid, Match.com, Hinge, and Plenty of Fish, reported that messages were up 30-40% across most of their apps in 2020 compared to the year before. YPulse’s Finding Love Post-COVID trend report found that 39% of single young people have been using dating apps more since COVID started, but we also found out one of the truths about pandemic dating: a lot of that dating app use was about staying connected and entertained, not necessarily finding a partner. It’s possible that digital dating needs an upgrade to reach the next gen.

And after a year of lockdowns, political upheaval and now impending FODA (a.k.a “fear of dating again”), what people are looking for in potential partners is also shifting. Young people are now looking for partners with similar interests, and potentially looking for information beyond the profile pic. Now, newer dating services are looking beyond just the typical swipe “right” or “left” function, finding ways for users to meet potential matches and partners by honing in on their niche interests or incorporating social-media-esque elements to allow them to really get to know a person—or at least stay entertained in the process of looking. Here are some of the newly launched dating apps who are trying to reach young people with new features: 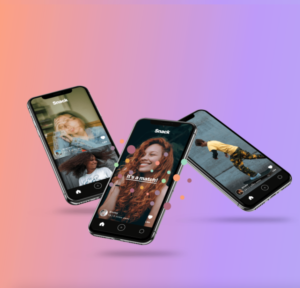 New dating app Snack is similarly positioning themselves as “TikTok for dating.” Founder Kimberly Kaplan, who previously was on the executive team for Plenty of Fish, noticed a “specific user behavior” when it came to Gen Z: when those younger users matched on dating services like Bumble or Tinder, they’d immediately continue that connection on other social apps like Snapchat or Instagram to “watch each others’ stories and more casually flirt” as opposed to sending “high-pressure” DMs back and forth to each other on the initial dating apps. During that time, TikTok surged in popularity, proving the shift into short-form videos as the social media darling du jour. That’s where the inspiration for Snack comes from: Users can make a video and post it to a feed. Other users can scroll through a feed Instagram-style and instead of swiping right or left on individual profiles, when another user “likes” a video, it opens up the ability to comment. Once both users have liked each others’ videos, their DMs open up. While Snack is still in its infancy, it has received $3.5 million in funding as of last month. There isn’t the option to location filter just yet, but Kaplan says that’s something they’re working on along with adding video editing features similar to TikTok to allow users to get creative with their profiles. 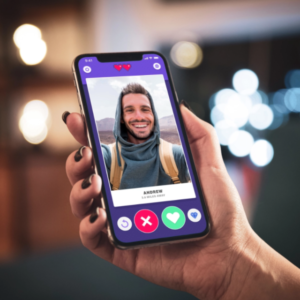 YPulse’s Gaming report found that 94% of 13-39-year-olds play video games in some capacity, and a new app wants to merge their gaming ways with their dating lives. Founded by siblings Stephanie and Lincoln Smith, 2up is helping gamers connect both on and offscreen. While it isn’t exclusively a dating app, users can specify whether they want to look for friends, new teammates, or a “romantic connection.” They can also filter down potential matches by sharing their preferred gaming consoles or platforms, favorite games, and whether they want to plan competitively or casually. Additionally, 2up is tapping into nostalgia with its “old school 8-bit aesthetic” design. Unlike other dating apps, they are generating revenue through premium subscriptions. A premium subscription provides users with unlimited swiping as well as “Charms,” which is the equivalent of a “Super Like” on Tinder, to help them gain attention from other users that they’re interested in potentially matching with. The app also has “quests” which reward users who use the app daily and complete “monthly engagement goals.” Those who complete the quests will be entered into raffles to win prizes like a gaming headset, gaming chair, or a new console. Stephanie Smith told TechCrunch: “We wanted to unify everything and put everyone in one place. We knew that there was a need for something that was more intimate. We wanted to deliver a way for that same community to connect one-on-one, on screen and off screen, to bring people together.” 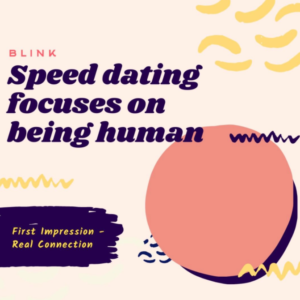 Thanks to audio-only emerging social platform Clubhouse which launched last spring, many other apps have since adopted similar premises. Blink is an audio-only blind dating app that focuses on personalities as opposed to what users look like. According to the site’s mission, they want to “enable members to create real connections without the influence of biases and assumptions based on physical traits.” It works by implementing a two-part matching process that relies on “chemistry through conversation and physical attraction.” When a user joins, they’ll be asked to create a simple profile where they can choose their preferences and upload only one image. From there, they’ll be asked to put in their availability for a “virtual, audio-only blind speed date” (a.k.a “Blink Date”). Based on the user’s availability, the platform will schedule 10-minute dates with potential matches. But because physical attraction is still important, they also have the choice to use the “Glance” feature to see the individual photo that users were asked to upload in their profile. Users will only be officially matched if they give each other mutual positive feedback from the Blink Date and “Glances” feature. Founder Taly Matiteyahu told Thrive Global earlier this month that while the idea was in the making for years, it wasn’t until 2020 that she felt like it was the perfect time to launch: “I finally began turning the vision into a reality and hope to change online dating’s looks-first paradigm, and one day, move the concept beyond the dating world.” 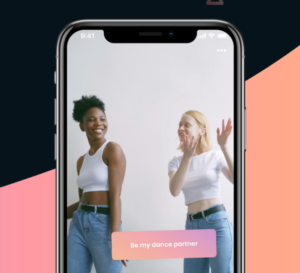 Meanwhile, Snack isn’t the only one using the “video-first approach.” Before launching Lolly, co-founders Marc Baghadjian and Sacha Schermerhorn were frustrated with the pictures, swiping, and height thresholds that seemed to define most dating apps. They felt strongly that “the current processes of swiping left or swiping right based on a few photos or really short bio isn’t enough to get to know someone, and isn’t enough to start meaningful relationships.” They wanted to create something to use video as a way to help users show, and get matched, because of their personalities, not just their looks. Cue Lolly, a dating app that is “a cross between TikTok and Tinder.” Lolly lets users upload short-form videos to their profiles for potential matches to scroll through in a vertical feed “that feels strongly reminiscent of TikTok.” The content allows users “to show off their humor and creativity more than regular dating profiles.” Because the platform lets users see videos based on their interests, there’s a higher chance to make connections with others “based on more than looks.” Unlike other dating apps, Lolly doesn’t have a “swipe left function,” and instead users can scroll past videos they don’t like, or they can “clap” for a video up to 50 times.  The entire interaction between two users is also kept private and not to make users go viral, which allows for more meaningful engagement not based on judging a person based on how many “likes” or “claps” they have, but because they appreciate them. Last month, Baghadjian told YPulse: “Swiping culture is exclusive, it’s dehumanizing, and it’s the past. We want to focus on multi-faceted attractiveness and, really for the first time in this industry, introduce personality into the equation.”

New TikTok Food Trends Are Dividing the Internet on The Viral List
A new “honeycomb pasta” is causing chaos on the internet and Totino's has a tasty twist...
The New Wave of Audio-Focused Social Apps
Thanks to Clubhouse, audio-focused apps are quickly growing in popularity. Here are fou...
4 Apps Rethinking Media, From Photo Taking to Beauty Streaming
From new ways to share photos to livestreamed beauty, here are 4 new media platforms to...