Millennial Parents Say Their Kids Use These Social Platforms

YPulse is constantly monitoring Gen Z and Millennials’ social media use—asking throughout the year what platforms they’re using, and using and engaging with daily. And their platform preference is, as we’ve said before, not always the same. These generations have, after all, grown up with different social platforms available to them, at very different ages. Many Millennials were teens when Facebook came around (or Friendster before it), while Gen Z is far more likely to have been born into a world with social platforms in it already. In fact, just 31% of Gen Z says that they remember a time before social media, compared to 50% of Millennials. That number will be non-existent for the next generation, who not only is being born into a social media world, but might even have social profiles created for them while they’re still in the womb.

Using these social platforms will shape these young (young) consumers’ tastes, entertainment expectations, and their worldviews—and these are the top platforms that they’re using (according to their parents): 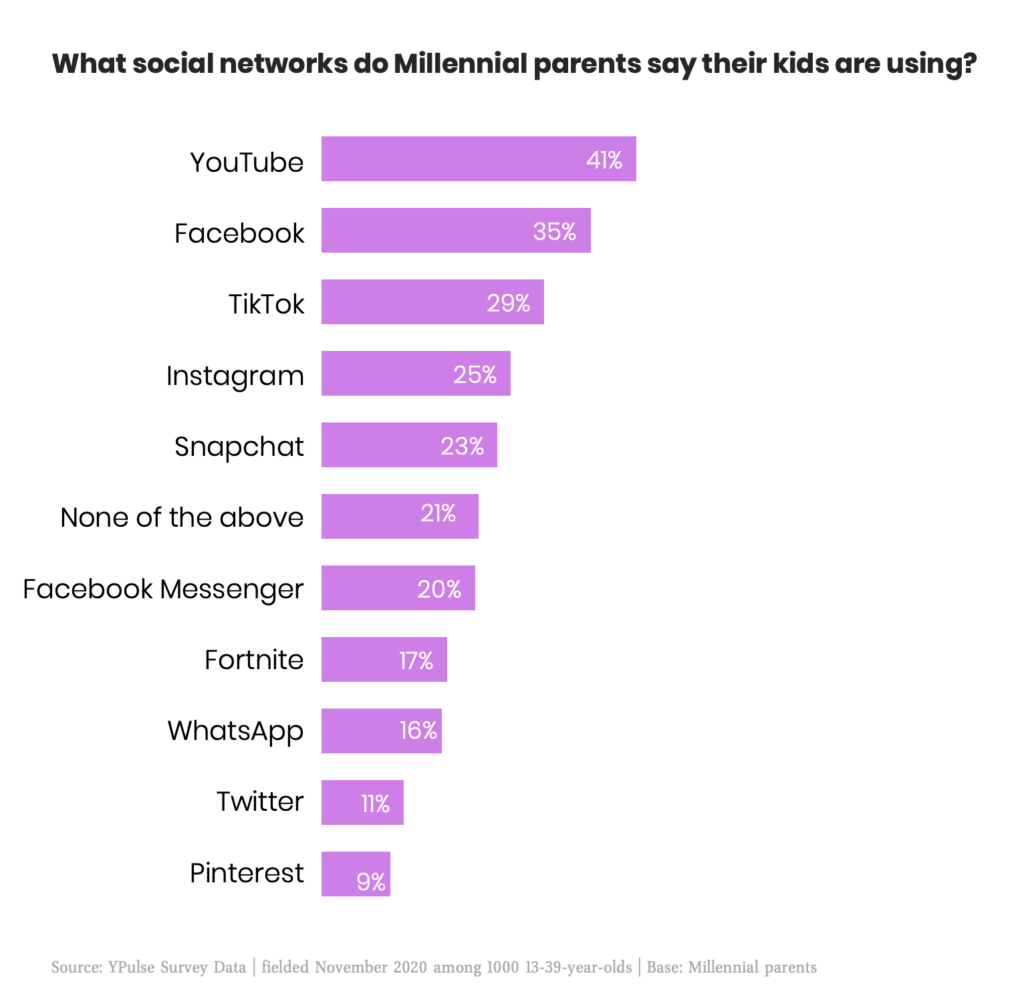 Like Gen Z, the next generation is growing up on YouTube. It’s the top platform that Millennial parents say that their kids are using, with 41% saying so—and of course even more young kids are watching content on it. (While we include YouTube in our social media monitor because of the many communities that thrive there, many, if not most, are using it passively.) Facebook is the second top platform that Millennial parents say their kids are on—which might surprise some, who have seen headlines (and YPulse’s own reports) that younger users have left the site behind. But remember, Millennials have been on Facebook since their own youth, and the majority still are—especially parents. In fact, 83% of Millennial parents say they use Facebook, compared to 56% of their non-parent peers. So it’s not too much of a surprise that Millennial parents are perhaps most comfortable having their kids use Facebook as well. They understand it, and don’t have to learn anything new to monitor their use.

But what should really get brands’ attention is that 29% of Millennial parents report that their children use TikTok—making it the top “new” social media that kids are engaging with. In fact, it has already surpassed more long-standing platforms like Instagram and Snapchat. TikTok’s growth has been enormous this year among Gen Z teens, and clearly the platform is also succeeding with even younger users. It’s also already become a major force in influencing their preferences—and product desires. According to CNBC, TikTok is driving “massive toy sales” during the pandemic. Families are hosting fewer playdates these days, resulting in less word-of-mouth chatter about new toys. Instead, kids have been learning about new products on platforms like TikTok, and it’s led to a surge in toy sales at various companies.

Brands should understand not only that young kids are spending time on social platforms, but also that the platforms they’re spending the most time on (like TikTok) will be influencing them from incredibly young ages. They are learning to discover products there already, and these spaces are certainly informing the kind of marketing and entertainment that they respond to.