Forever 21 and Macy’s both went viral for diet-shaming their customers this week, K-pop fans are calling out the VMAs for xenophobia, VSCO girls are the anti-Instagram baddies, and more recent news that brands should slow their scrolls for… 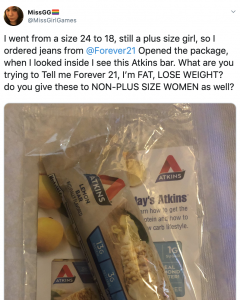 1. No One Wanted Atkins Diet Bars with Their Forever 21 Order

Forever 21 recently found out that even bargain-hunting young consumers don’t want every freebie—especially if it makes them feel body-shamed. Shoppers that ordered from the fast fashion retailer this week received an unexpected and unwelcome surprise at the bottom of their boxes: Atkins diet bars. The first customer to share her discovery (@Gigicurious) on Twitter tweeted at Forever 21, “I have received my order of 5 items from the plus section…..oh and this #atkins bar that slipped in there. I don’t take kindly to people telling me how to live my life.” BuzzFeed News reports that the brand controversy has only escalated from there, as other customers shared their similarly unwanted freebies on social media. CNN reports that Forever 21 has apologized, calling the mistake “an oversight.” 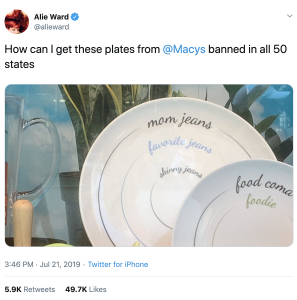 In a diet-shaming double-whammy this week, Macy’s portion control plates went viral for all the wrong reasons. The dishware in question drew concentric circles to dictate portions; for instance, one contained “Mom Jeans,” “favorite jeans,” and “skinny jeans” circles. The Body Positive generation did not appreciate the Pourtions line, and were quick to call out that they “casually promot[e] eating disorders and body shaming.” Jameela Jamil, a frequent champion for body positivity on social media, tweeted her outrage to the tune of over 123,000 likes. The Huffington Post reports that the retailer was quick to apologize and remove the plates from their stores, while the President of the brand behind the plates, Pourtions explained that they meant the plates “to be a lighthearted take on the important issue of portion control.” 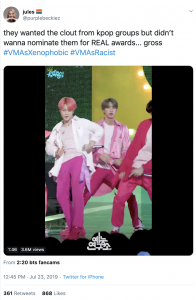 3. K-Pop Fans Are Not Happy About the VMA’s New K-Pop Category

MTV has a new category to award K-pop stars, and K-pop fans are not pleased. K-pop has taken over the U.S. charts this year, as Gen Z and Millennials’ Borderless Culture tastes have impacted the industry. According to our research, 29% of 13-17-year-olds & 36% of 13-17-year-old females follow K-pop, and those young fans want to see their favorite stars awarded in the same categories as major American pop musicians. Korean bands like BTS and BlackPink are global phenomena who have, according to Vox, outsold most other VMA nominees. Unhappiness over the decision to segregate K-pop artists into their own category prompted the hashtag #VMAsracist, and a lot of vocal criticism from young consumers on social media. Teen Vogue sums up fans’ reactions with the headline: “MTV VMAs’ New K-Pop Category Is Another Way to Marginalize Successful Non-White Artists Like BTS and BLACKPINK.” 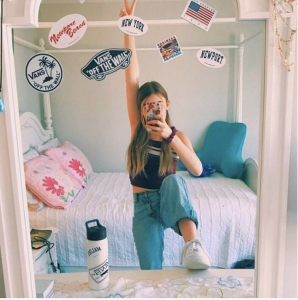 4. VSCO Girls Are the Anti-Instagram Baddies

BuzzFeed reports that there’s a new kind of girl taking over social media: The VSCO Girl. Defined by Urban Dictionary as “Tumblr girls of 2019,” their look is the antithesis of the “Instagram baddie,” who are known for their highly-styled, heavy makeup and thick brows. Instead, the VSCO girl is about athletic clothing, barely-there makeup, beachy-pursuits, and of course, taking pictures using the app they’re named for. But brand names are a big part of their uniform. According to the many, many posts devoted to “VSCO girl starter packs,” (over 1.4K under the hashtag on Instagram) the style includes lots of scrunchies, lip balm (Carmex preferred), puka shell necklaces, friendship bracelets, barrettes, Crocs, Vans, Birkenstocks, a Hydro flask,  Brandy Melville, Fjallraven backpacks, and Mario Badescu facial spray. #VSCOgirl has almost 1 million posts on Instagram, and VSCO girl transformation videos are trending on TikTok—a favorite platform for these young, “effortless,” girls. One catch to the whole trend: BuzzFeed reports the aesthetic is dominated by images of white, thin girls, excluding many. 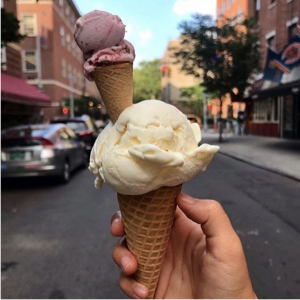 The mystery of perfect In-N-Out burger found on the streets of NYC captivates the internet, the next wave of #MeToo is calling out famous photographers, a creative PrettyLittleThing customer turned a wine spill into a fashionable outfit, an Internet Explorer parody account is cracking up the internet with its “breaking news,” a social media rant against “childless-Millennials” at Disney World goes viral, and the coolest new topping for your ice cream cone is…another cone?