But overall, as parents, they’re spending a lot of time on social and relying on it to guide their decisions, with one in five following a hashtag or individual on social media to get parenting tips or advice. These days, public displays of parenting seem to happen on social feeds first, with posts of sonograms and staged pregnancy announcements feeling commonplace. From then on, kids’ photos are posted with regularity, and Instagrammable family shots and birthday rituals (cake smash photos, anyone?) seem to be shared by young parents at an increasing frequency. In our last Millennial parenting survey, we asked Millennial parents if they had participated in these or any social media-fueled parenting trends, and learned that a third have done one thing in particular because of social media: 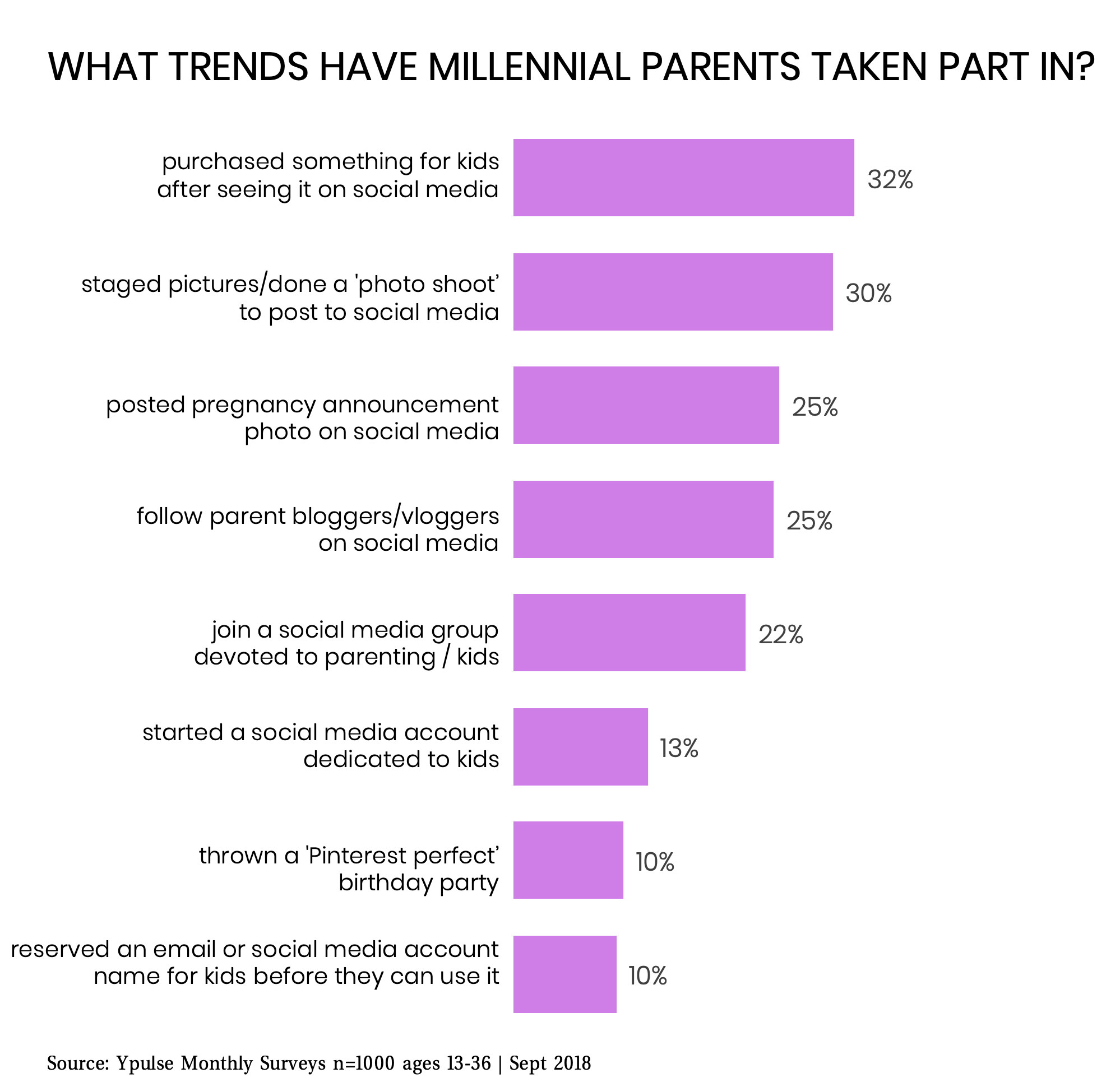 One of the top roles social media seems to be playing in Millennial parents’ lives is its influence over what they buy their families: a third tell us that they have bought something for their kids after seeing it on social media. When we looked at the top influences on their children’s product purchases, 33% say social media ads and 30% say social media posts—the same number that say they’re influenced by reviews/recommendations from online celebs. We’ve explored the rising influence that Instagram has over young consumers’ purchases overall, and brands should take note that parents are far from exempt here. Instead, thanks to the larger amount of time they’re spending on social platforms, they might be even more influenced than most.

Beyond finding products on social, many Millennial parents are also participating in at least one trend driven by social media. Three in ten have staged pictures or done a photo shoot specifically to post to social media. In fact, our social media behavior survey found that 49% of Millennial parents agree with the statement, “I’ve done something just to get a photo of it to post to social media,” versus 38% of non-parents.  A quarter of Millennial parents report posting a pregnancy announcement photo on social media, and that number increases to 40% when we look at just moms. Moms were also more likely than dads to say that they have joined a social media group devoted to parenting or their kids, with 27% reporting this compared to 17% of dads. But interestingly, it’s dads who are more likely to say they have started a social media account dedicated to their kids—so don’t believe that it’s just Millennial moms who are joining in on social trends.

Western Europe
4 Brands Tapping TikTok to Reach Young Europeans
Having a TikTok marketing strategy is a must for brands trying to reach young Europ...
North America
You Got #Krissed is One of the Top Trending Hashtags This Month
According to Gen Z, trends start on TikTok first before spreading to other platform...
North America
Just How Big Has TikTok Use Gotten Among Gen Z?
No other platform has won Gen Z over as completely as TikTok–and these are the late...