What Millennials Actually Spend Their Money On 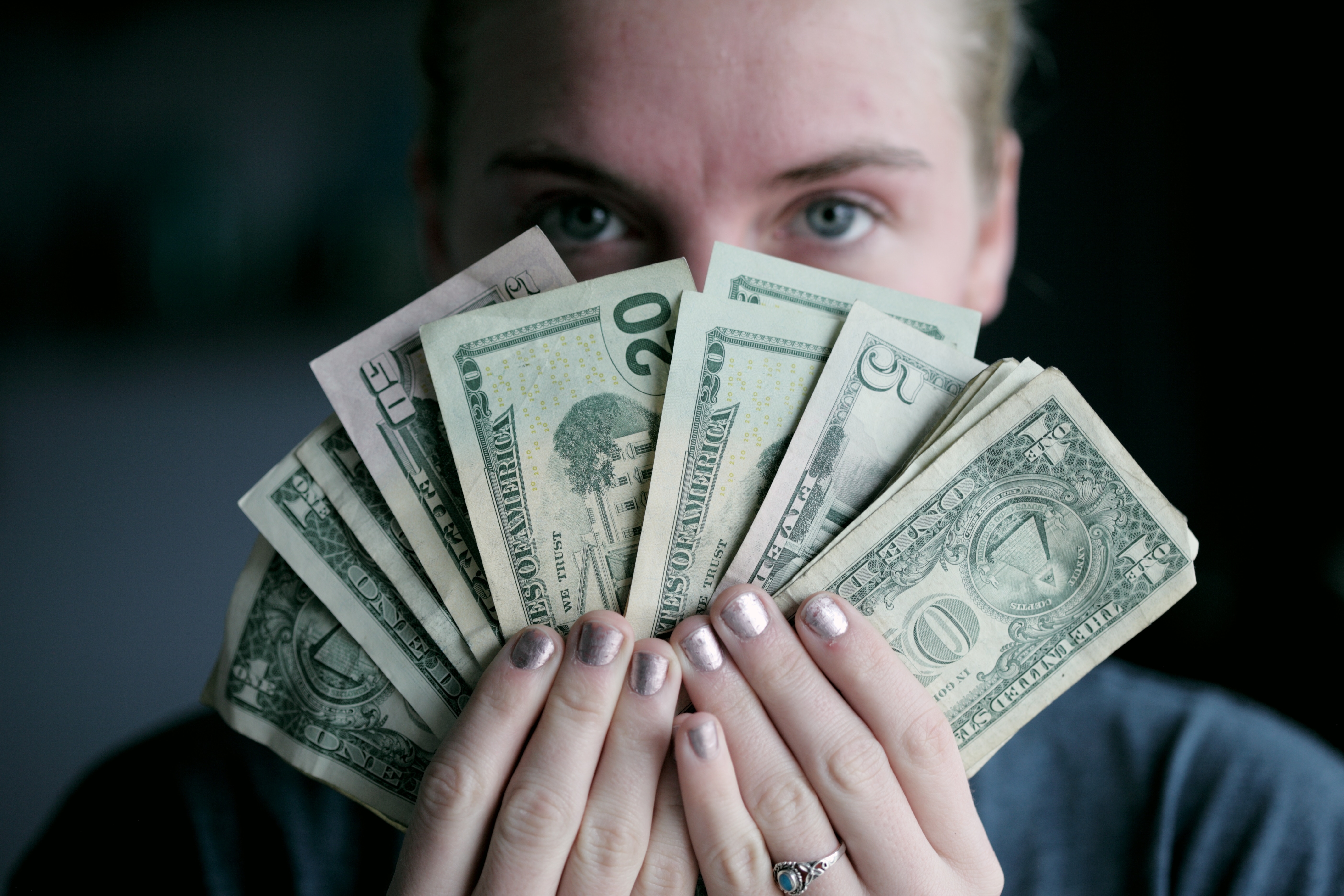 We asked 18-35-year-olds where their money goes in an average month. Hint: it’s not all spent on avocado toast and video games…

When it comes to handling their money, Millennials aren’t cast in the most favorable light. Thought of as irresponsible spenders, young consumers  are criticized for frittering away their cash on frivolous purchases (avocado toast, anyone?) meant to up their ‘gram game instead of saving it for the big-ticket items that signal adulthood–cars, homes, luxury items, etc. At the same time they’re being bashed for their inane investments, however, Millennials are also villainized for not spending as much as older consumers, leading to widespread panic about the industries, institutions, and traditions the generation is killing off. In fact, a recent study from the Bureau of Labor Statistics shows that Millennials have the fewest number of vehicles, rent more, and spend the least on apparel than any other generation, but spend more on eating out. Over the years, viral headlines have claimed that Millennials have done away with everything from juice and fabric softener to napkins, cereal, magazines, chain restaurants, malls, casinos, and more, all for lack of cracking open their wallets.

But this isn’t the full story. According to a survey from Bankrate.com, Millennials are outspending older generations by about $2,300 a year. And while some of that money is, in fact, spent at restaurants and on other “frivolous” goods and services, much of their budgets are devoted to paying for groceries, gas, and cell phone service. And when we asked Millennials their top financial goals, paying off debt and student loans, buying a house, and bills were among their top five answers, not buying rainbow bagels or getting unicorn hair. On top of that, 56% of Millennials say that past or current student loans have delayed a major life event or purchase, according to another Bankrate.com survey. In other words, their financial responsibilities are controlling their spending habits, not the other way around.

Clearly, there’s a bit of a discrepancy between how Millennials are actually spending their money and how older generations perceive their spending habits. And with the generation set to have the most spending power of any generation, with $200 billion in 2018, it’s important to know just where that Millennial dollar is going. Luckily, we’re always tracking just that, and in our most recent Topline on finances and spending, we asked 18-35-year-olds to tell us what they spend money on in a normal month. Here’s what they had to say: 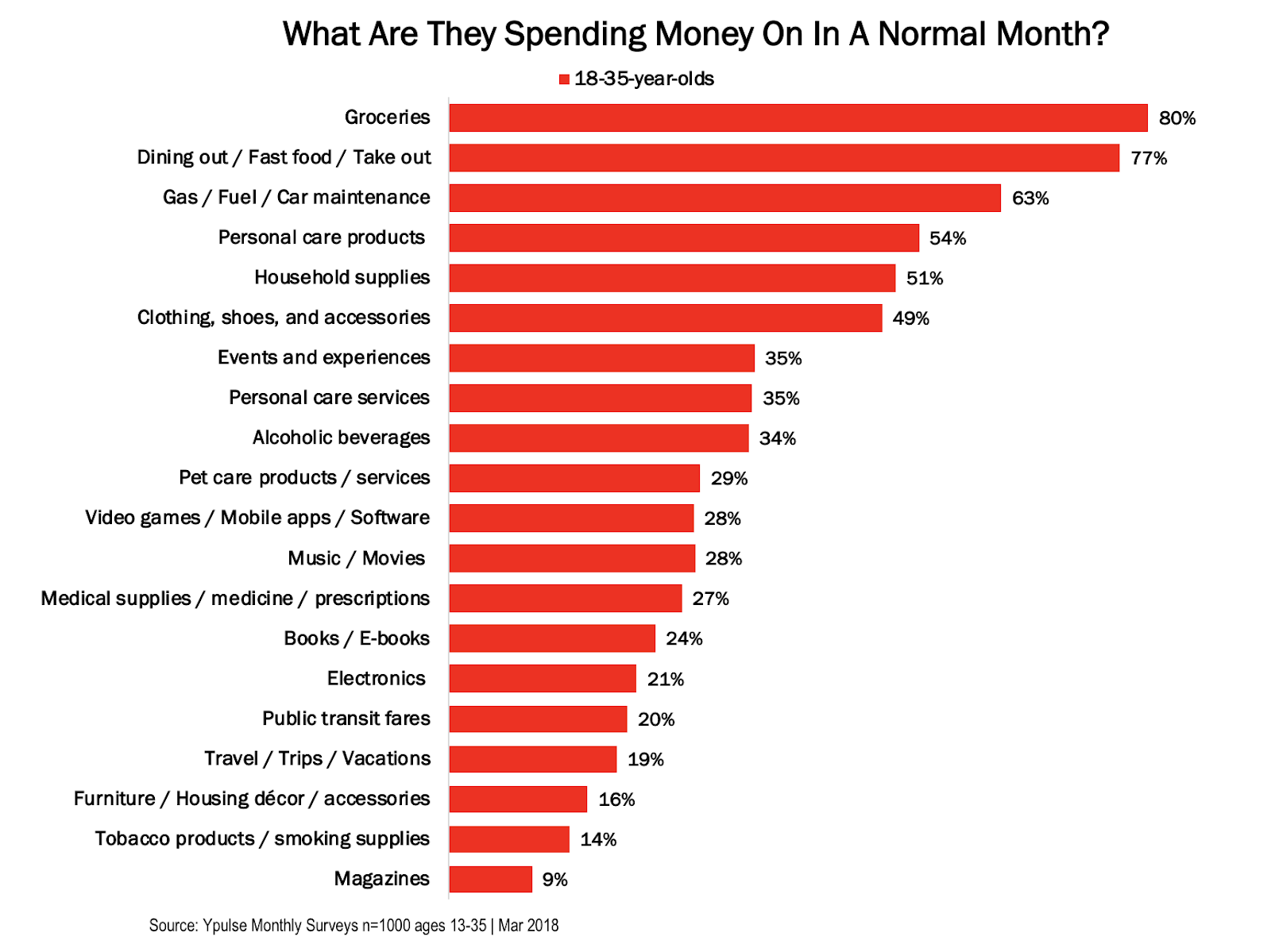 Despite claims that Millennials are too lazy to even make themselves a bowl of cereal, the vast majority of 18-35-year-olds are spending their money on groceries. That shouldn’t come as a surprise. According to last year’s survey on cooking and food trends, half of Millennials consider themselves foodies. And while that translates into restaurants going viral and new food trends becoming social media stars, it also means that they’re cooking more. According to Ypulse’s research, almost four in five 18-34-year-olds say they like to cook, nine in ten say they want to learn to cook better, and almost three in five say that cooking is one of their favorite things to do. When we asked them about their biggest hobbies, cooking made the top ten list. On top of that, they’re shelling out more at higher-end grocery stores. Ibotta’s Millennial Shopping Report analyzed over 65 million purchases to find that, despite putting less in their baskets, the young demo is spending more at stores like Whole Foods.

Millennials are also going out to eat a lot more than other generations. According to research from Bank of America Merrill Lynch, though all adult generations are spending about the same percentage of their money on food, Millennials are more likely to eat at restaurants while older generations are more likely to go grocery shopping. Stats from the Food Institute and MMGY Global also show that Millennials are spending $89 more a year on dining out than the average American, and $305 more than 55-64-year-olds. While they may not be going to the same restaurants their Boomer parents did (sorry Applebee’s), their willingness to spend on dining out has created enormous opportunity in the restaurant industry, fueling the fast-casual trend and more.

Other areas of spending are also getting a boost from 18-35-year-olds. Millennials spend twice as much on self-care as Boomers, and in 2015, 94% of Millennials were reportedly making personal improvement commitments, compared to 84% of Boomers and 81% of Xers. They also anticipated spending an average $300 a month on self-improvement, twice as much as Boomers. As they’re growing up and settling down, Millennials are also shifting their spending from clothing to home goods–one economist expects that while clothing retailers will continue to struggle in the coming years, home goods stores like Williams Sonoma will surge. And let’s not forget about wine and craft beer: 34% of Millennials 21-and-over are buying alcoholic beverages.

But this isn’t where all their cash is going. Millennials self-report having an average of $300 in spending money each month. The rest goes to bills: 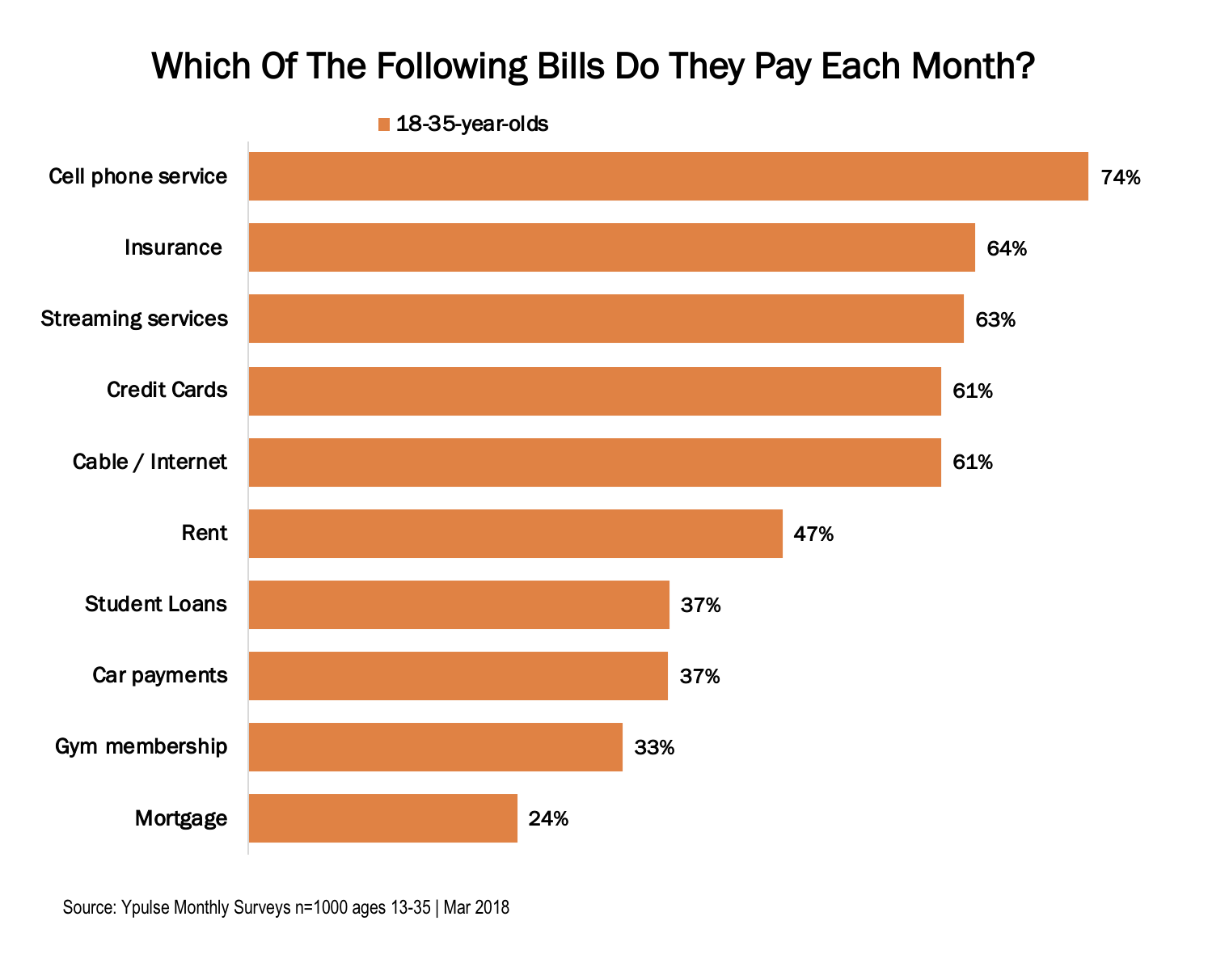 It’s true that Millennials have been slower to hit the markers of adulthood than previous generations, but there are continuous signs that they are reaching them in their own time–including the increasing percentage of 18-35-year-olds who are taking on their own bills. Last year, just 16% of Millennials reported paying a mortgage, which has jumped to 24% this time around, a figure that is expected to climb as the generation gets more financially stable. In fact, last year Millennials bought more houses than any other generation for the fourth year in a row. NAR’s 2017 Home Buyer and Seller Generational Trends study reported that Millennials made up 34% of homebuyers in 2017, compared to 30% of Boomers. LendingTree also said that on average 36.1% of all their mortgage requests came from Millennials, a slight increase from the year before.