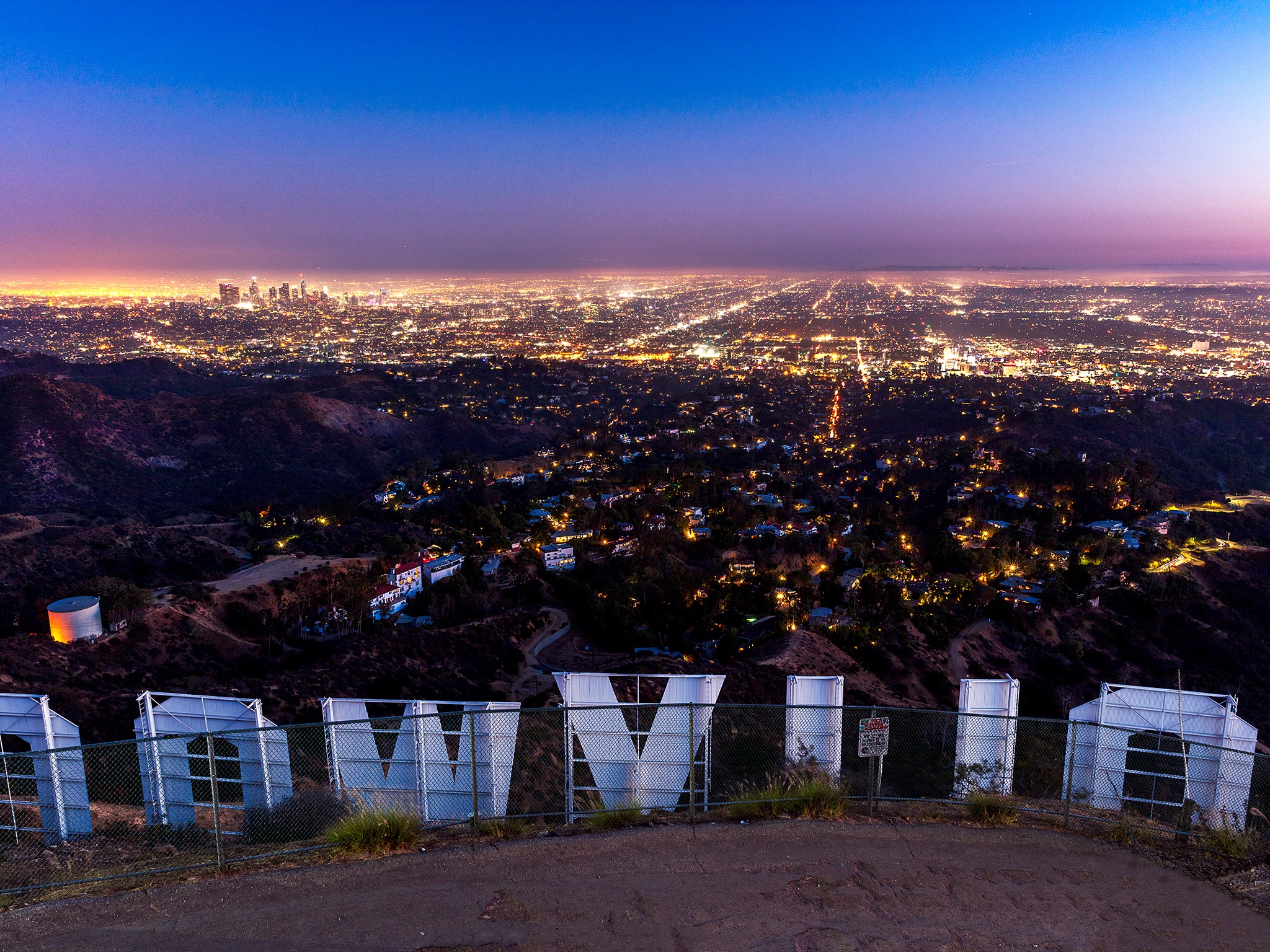 When the definition of fame is increasingly blurry, who are the celebrities that still get the attention of Millennials and Gen Z? We asked their favorites to find out…

Fame is more fragmented than ever, in a time when online influencers collect millions of fans, reality TV stars can become top hit musicians, and entertainment overload has multiplied the number of faces in the public sphere. As one 30-year-old male told Ypulse, “[Celebrity] can mean anything nowadays and it’s a rather diluted term; from YouTube star, to someone on Instagram with millions of followers, to reality TV dopes, etc.”

We’ve written plenty about the redefinition of fame, as the definition blurs, thanks in large part to young consumers’ preference for online content, and their desire to connect to celebrities via mediums that are more intimate than anything that has existed before. The public figures Gen Z and Millennials are most interested in watching, where they are interested in watching them, and who is influencing them continues to shift. This year, Time Inc. rang in a “new era of celebrity” with their “New Fame List,” naming the top movers and shakers in digital today. Logan Paul, Lilly Singh, Issa Rae, Rudy Manusco, and Jeffree Starr are just a few of the “entertainers, visionaries, real deals, trend setters,” and “lookers” to make the list. Clearly, there is more competition than ever to become a well-known celebrity—and a celebrity that Gen Z and Millennials actually care about. To continue tracking the kinds of celebrities that manage to achieve higher levels of fame, in our recent entertainment survey we once again asked 13-35-year-olds, “Who is your favorite celebrity?”*

About 300 celebrities received mentions—and roughly two thirds of those mentions were from one or two respondents only. Lin-Manuel Miranda, Pewdiepie, JK Rowling, and Trey Songz are a tiny sampling of the names we saw mentioned by just a couple of young consumers. It’s clear evidence of the celebrity overload that we’re seeing today—there are more ways to get famous, and more venues to be in the public eye, which means racking up devoted fans is a bigger feat than ever. So, who managed to receive the most mentions? Here’s the top 15:

*This was an open-end response question to allow us to capture the full range of celebrities that Gen Z and Millennial consumers say are their favourites—without our preconceived ideas shaping their responses. As with any qualitative question, the responses include those that are top of mind and those that are most popular. The lists are ordered according to number of responses received, and alphabetically when ties occurred.

Who Is Their Favorite Celebrity?

Before we talk about the star at the top of the list, we should note that musicians dominated the top 15 favorite celebrity ranking. This follows a larger pattern Ypulse has seen in celebrity admiration: Musicians are the top type of celebrity young consumers follow on social media, as well as the kind of celebrity they say they admire the most, and that they think have the most talent—when compared to online stars, Hollywood stars, and athletes. We’ve also seen that Gen Z and Millennials are slightly more likely to say that they would pay attention to paid posts from musicians on social media than paid posts from online influencers/creators or Hollywood actors/actresses.

But back to the musician in the number one slot on the ranking. Rihanna received the most mentions as favorite celebrity this year, knocking Taylor Swift from her 2016 perch. What changed—especially when we saw Swift rank above Rihanna in the recent favorite musician survey? Well, timing might be everything. The favorite celebrity question was fielded September 8th-September 12th, almost exactly the time that Rihanna announced her new, inclusive beauty line Fenty, and drew the attention and admiration of young consumers. The announcement could have given RiRi a boost—and one 16-year-old female fan told us she named Rihanna because, “She’s a good person and a great artist. She also appreciates her fans and family. Also she has an amazing sense of style and I think it’s really cool how she has a clothing line, makeup line, and can be in the top 100.” 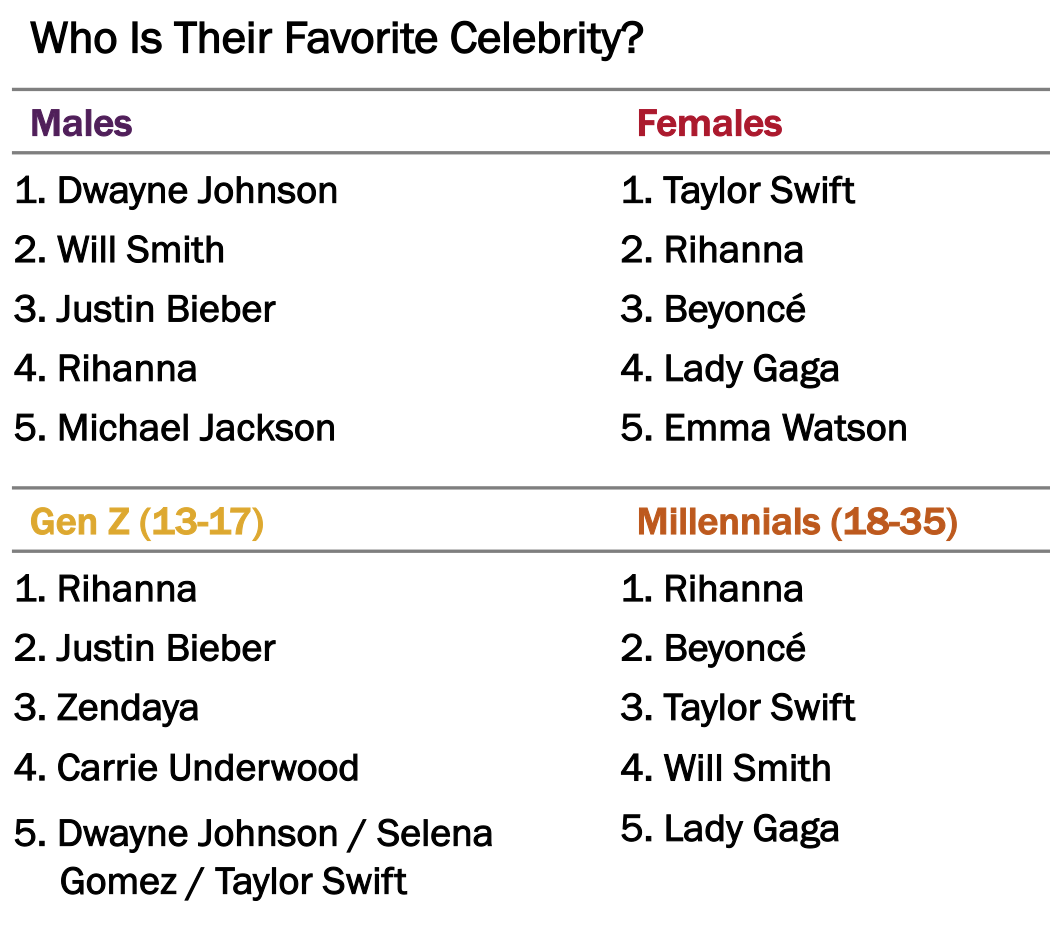 That’s right, Taylor Swift still reigns as the top favorite celebrity of females 13-35-years-old overall, with Rihanna in a close second place. But Rihanna topped the list of both Millennials and Gen Z.

However, the fragmentation of responses among 13-17-year-olds was even more extreme than we saw among Millennials, with the large majority of celebrities named receiving only one or two mentions. The pattern hints that fame is even more fragmented among this young group—which makes sense considering they’re the ones migrating to online content and fueling the online influencer trend. This also may be why humor works better than celebrity endorsements when advertising to teens—according to Millward Brown Digital. The firm recently looked at 16-19-year-olds’ attitudes towards advertising, and found about 72% say humor boosts their receptivity, 58% say good music, and 56% say a good story—while celebrities in ads ended up “far less important.”