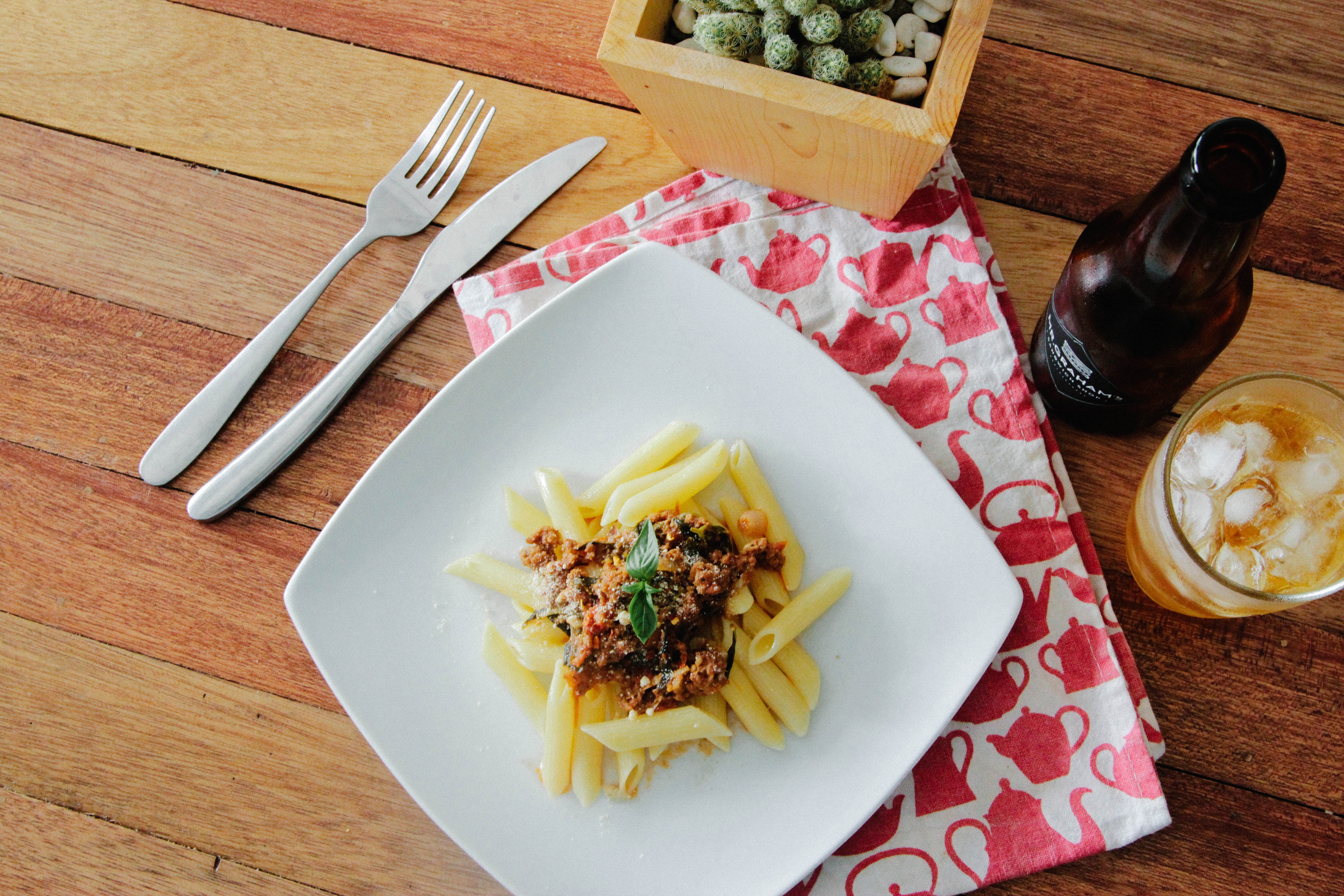 Has cooking become a lost art? Not according to Millennials, who tell us they prefer to be in the kitchen and are hungry to learn more about cooking. We’ve got six stats that outline their culinary behavior…

This week, a headline declaring that cooking is a lost art cited Millennials’ tendency to cook simple meals, eat leftovers, snack, and dine out more than older generations as reasons that cooking is on the decline—but what would Millennials have to say about that? According to Ypulse’s research, cooking is a passion for the generation: almost four in five 18-34-year-olds say they like to cook, nine in ten say they want to learn to cook better, and almost three in five say that cooking is one of their favorite things to do. When we asked them about their biggest hobbies, cooking made the top ten list. Cooking/baking was also on both lists of what Millennial males and females are passionate about right now. One 29-year-old male from North Carolina told us, “There’s been a resurgence in the home cook, and that’s been my biggest interest. There’s increasing amounts of high-quality, interesting produce and recipes to use.” Though they might be cooking different foods, in different ways, to this generation cooking is far from a lost art—it’s an art they’re excited to find out more about.

So how many are actually cooking, and what are they up to in the kitchen? Our recent Ypulse monthly survey explored their culinary behavior and preferences, and we’ve boiled it all down (sorry) into six stats: 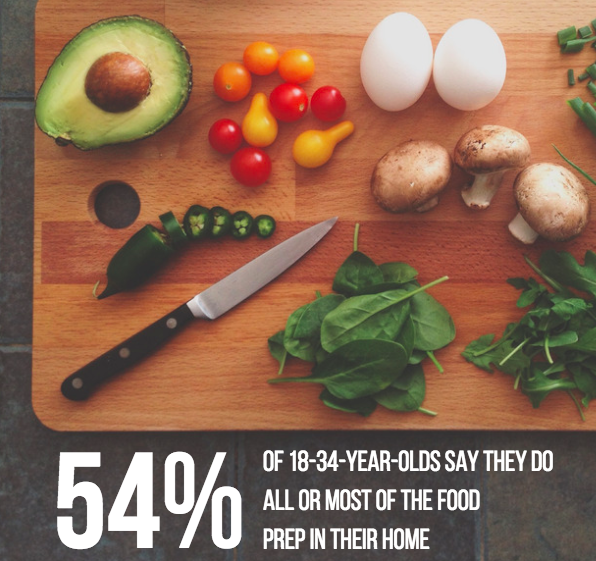 The majority of Millennials are cooking at home, with over half (54%) of 18-34-year-olds reporting that they typically do all or most of the food preparation in their homes. Males and females were almost equally likely to say that they are responsible for food prep. Only 5% of Millennials say that they aren’t responsible for ANY of the food prep, and a quarter say that it’s a shared responsibility. Considering that 18-24-year-olds are still likely to live with their parents, it’s not too surprising that the number of young consumers who say they are either responsible for the meal prep or that it’s a shared task increases as they age up, with almost 60% of 25-34-year-olds saying they do most or all of it. 2. Millennials are cooking an average of 5.6 meals a week at home.

According to their own estimates, 18-34-year-olds are making almost six meals a week at home on average. While that number may be lower than previous generations, it hardly counts them out as home cooks. Eighty percent are cooking 1-7 meals at home a week, and 12% report cooking 8-14 meals at home a week. And though they’ve certainly earned their reputation as delivery dinner aficionados, cooking time is also outnumbering dining out time: they estimate that they’re going out to eat or ordering delivery/take out about three times a week on average. 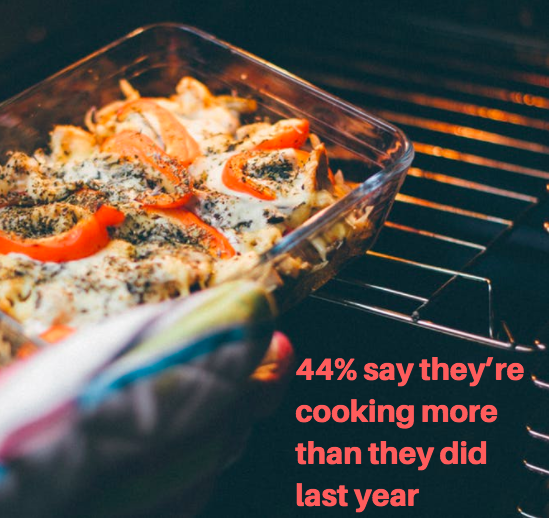 3. Two in five say they’re cooking more now than they did last year.

Many Millennials also feel they’re increasing their time in the kitchen. When we asked them to compare their cooking activity to last year, 44% said that they’re cooking more—compared to 21% who feel they’re cooking less. Males 25-34-years-old were the most likely to say they’re cooking more, at 48%. Others have uncovered similar findings: according to a survey by Peapod and ORC International, Millennials are twice as likely as older generations to say that they wanted to cook dinner at home more in 2017. 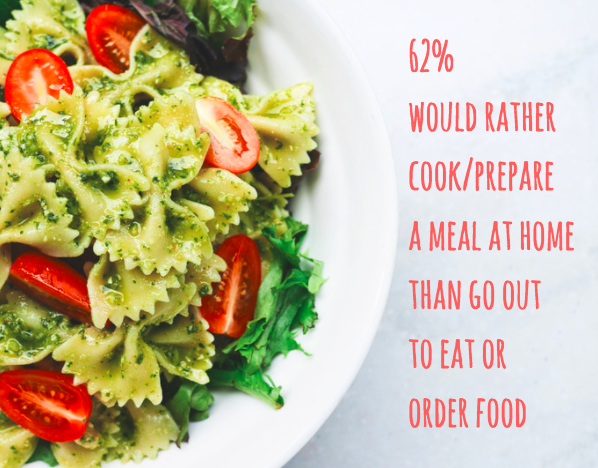 4. Three in five would rather cook/prepare a meal at home than go out to eat or order food.

Not only are they cooking more often a week than they’re dining out, they tell us this is actually their preference. If choosing between the two, 62% of 18-34-year-olds say they would rather cook or prepare a meal at home than go out to eat or order delivery/takeout. In addition to an enjoyment of cooking, finances might have something to do with this preference. Many Millennials feel guilty about splurges, and know that they should be trying to cut back on extravagances like dining out—after all, they’re told that every avocado toast they buy is keeping them from buying a house. 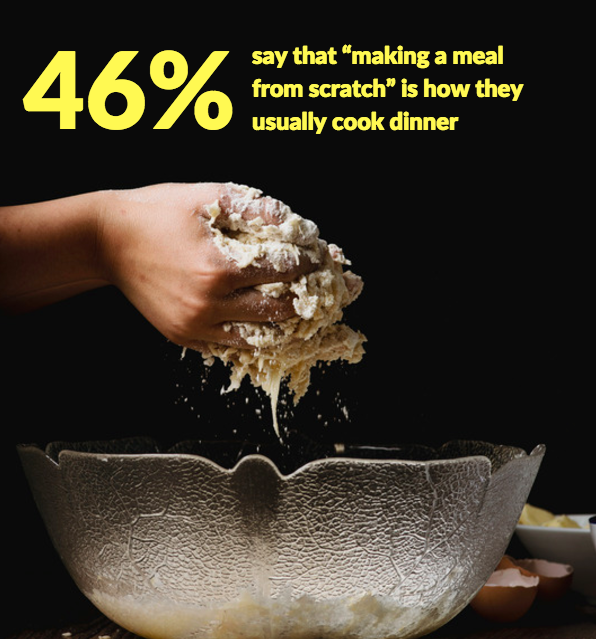 5. Almost half say that “making a meal from scratch” is how they usually cook dinner.

There has been a good amount of debate around exactly how Millennials define “cooking.” Is it pouring a bowl of cereal? Making a boxed meal? Heating up a can of soup? Well, it turns out that almost half say that making a meal from scratch is how they usually cook dinner. That’s compared to almost 30% who say they usually use a mix of packaged ingredients and ingredients they have to cook. Only 8% tell us that they usually heat up a frozen meal/can of soup, and 8% usually use packaged ‘meals in a box’ (e.g. mac & cheese, salad mixes, Hamburger Helper, etc.). 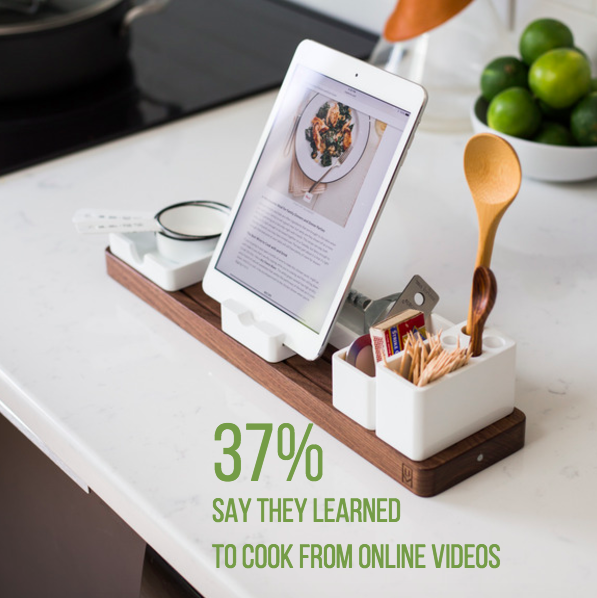 6. Almost two in five say they learned to cook from online videos.

The sources that they have learned to cook from are diverse. While family is the number one source, at 71%, 37% of 18-34-year-olds say they learned to cook from online videos, and 33% say they learned from social media (e.g. Pinterest, Instagram, etc.) The popularity of online cooking videos has created an entire industry and new marketing content. Studies from BuzzFeed Tasty found that about half of its video viewers were re-creating the recipes they watched, so BuzzFeed worked with GE to create the Tasty One Top. The smart appliance connects to Tasty’s recipe app via Bluetooth, tracks internal food temperatures and surface temperature, and gives notifications when food is ready to flip and done.