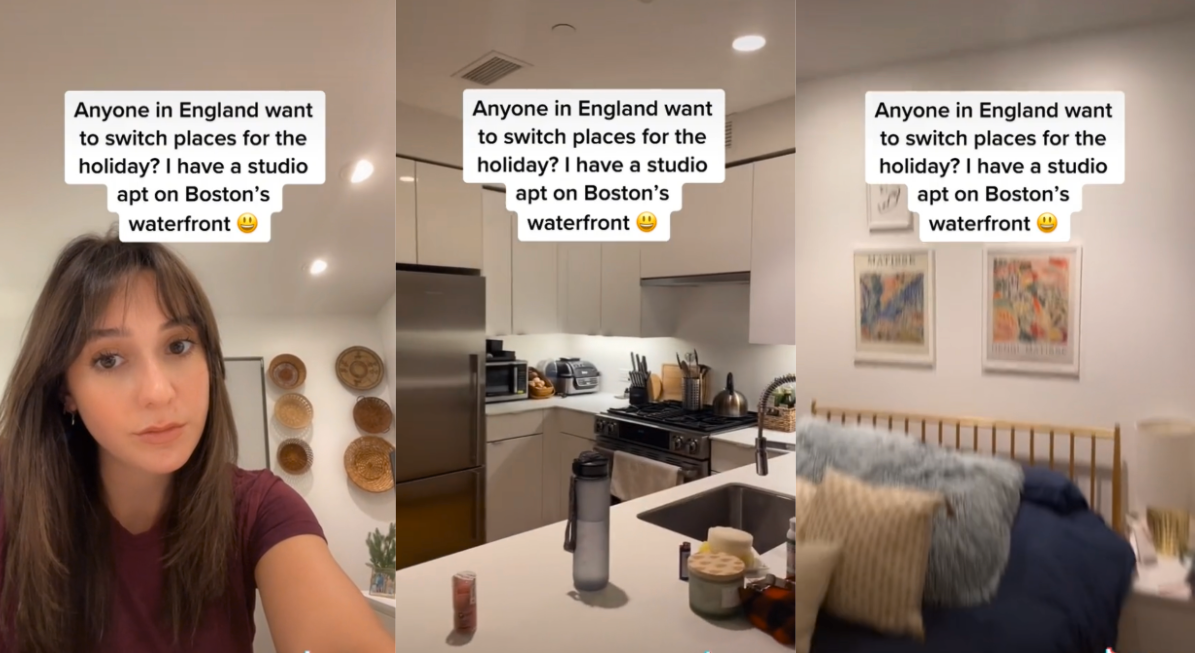 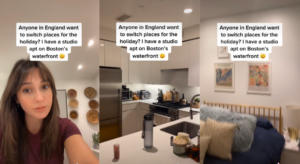 A TikToker is swapping apartments with someone for NYE (just like in The Holiday), Olivia Rodrigo fans are sharing their frustrations about not being able to get tickets to the artist’s tour, GriefTok is a TikTok subculture helping users share their stories of loss, Peloton crafted a response to their And Just Like That debacle in 48 hours—plus more internet buzz on this week’s Viral List! 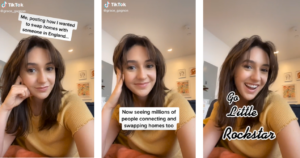 This TikToker Is Swapping Her Home With Someone For The Season (Yes, Like In The Holiday)—And It’s Nancy Meyers Approved

Let’s be real, we’ve all felt inspired at one point or another to swap our living spaces with someone from another city (or country) after watching Nancy Meyers’ iconic Christmas movie, The Holiday. But would we actually do it? Probably not. Twenty-five-year-old Grace Gagnon thinks otherwise, and after uploading a video to TikTok showing off her apartment set to The Holiday theme music where she jokingly inquired: “Anyone in England want to switch places for the holiday? I have a studio apt on Boston’s waterfront. Serious inquiries only. Bonus points if you have a hot, single brother,” Gagnon has received multiple offers from TikTokers interested in swapping living spaces for the holiday. Gagnon’s TikTok has garnered 3M views with several comments begging Gagnon to keep them updated. Since then, she’s been updating the TikTok community, saying she has been talking to people in England who may be interested in her offer while explaining her must haves for her to go through with the deal (i.e. preferably going somewhere for New Year’s Eve and swapping with someone in the U.K. unless COVID-19 derails international travel). In a video posted earlier this week, Gagnon confirmed that she officially chose where she was traveling / staying, but was waiting for approval from the other person before she revealed her whereabouts (as of writing this, Gagnon hasn’t revealed to the TikTok community where she is traveling). While everyone waits in anticipation, Nancy Meyers posted her well wishes for Gagnon in an Instagram post reading, “Good luck @grace_gagnon! Remember, it was a movie and I knew Jude was on the other side. Have a great holiday!” Gagnon was shocked to find out Meyers had commented on her plans to travel across the pond. But what was even more shocking to her was the fact that her original TikTok, which started as a joke, has kicked off a trend of other creators posting about swapping their homes for the holiday. Gagnon notes, “I love seeing everyone connecting in the comments. It’s been a really tough couple of years, thanks to the pandemic, so if this trend can bring people together across the globe, I’m here for it.” So, if you’re like us, we’ll be keeping up with Gagnon’s holiday adventure the next two weeks as we soak up the rest of what 2021 has to offer.

Shortly after announcing Olivia Rodrigo’s “SOUR” tour last week, sales for the event went live on Ticketmaster. Much to fans’ dismay, however, many were met with “technical difficulties” on the Ticketmaster website. And while some were able to make it past the hold up, several were left with nothing due to multiple factors—the biggest being the fact that most of the venues for the tour are smaller-scale ballrooms and theaters, making it more competitive for fans to score tickets due to limited capacity inside the locations. Many who signed up for “Verified Fan” registration were also left empty handed due to “technical difficulties” on the site, despite the fact that the feature was made available to “level the playing field so that more tickets go to fans who intend to go to the show—and not ticket bots,” according to Ticketmaster’s website (although, the feature still doesn’t guarantee ticket access). Naturally, fans took to Twitter to share their frustrations, sharing memes from Olivia’s “Good 4 U” music video where she’s standing outside a burning house with the caption, “Olivia Rodrigo watching a queue of 40,000 try and get tickets for a 3,500 apollo; she needs arenas.” Other Twitter users are saying the “Verified Fan” feature “failed” by letting scalpers snatch up the tickets first to resell them at much higher prices. Screenshots were shared to Twitter, detailing the high markup on general admission seats (some were going for $1-3K even for the most far away seats). According to Business Insider, Ticketmaster has not responded to the “technical difficulties.” Clearly the “SOUR” fans have spoken. Maybe next time Rodrigo will get a whole stadium (as she deserves) so fans can have a less “Brutal” go around. 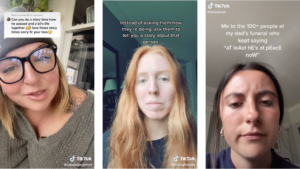 YPulse told you how TikTok subcultures are helping boost sales, but there’s more to these in-app communities than discovering new products or hobbies. Known as “a space for discussing the universal experience of loss,” GriefTok has created a setting for TikTokers to share stories of death, loss, and grief through photographs, video, and narration. #Grief counts 1.5B views and #GriefTok has garnered 44M views as users share their unique stories with grief, things they’ve learned in therapy, how to help people who are experiencing loss—all while emphasizing the fact that grief isn’t linear, but is an ongoing cycle. Mashable spoke to one TikToker about her experience with the GriefTok community: “Grief can be an incredibly heavy emotion to navigate alone,” says Lauren Bulloch. “I personally love to share on TikTok because, when I found myself in a really dark place, a saving grace was hearing stories of others that had walked a similar path.” The subculture has permeated other hashtags, like #GriefJourney (354.3M views), and the comments provide a lens into how users are showing up for others by sharing things they’ve learned throughout their grief journeys. The pandemic has opened up multiple conversations about life and loss that weren’t as common before, while inspiring young people to open up about their mental health experiences across the board. Whether it’s finding community by talking about their work experiences or simply how they’ve been struggling throughout the pandemic, social media groups have been helping young people build community in unlikely ways. YPulse’s Clicking on Community trend research explores how Gen Z and Millennials are building community through online groups, and our research shows 40% of Gen Z and 38% of Millennials say social media acts as a source of meaning, guidance, and / or support for them. 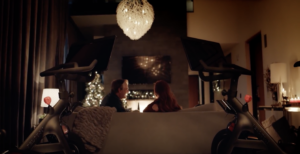 And Just Like That, Peloton Reclaimed Its “Big” Moment in the Sex and the City Reboot

By now you probably know about Peloton’s viral moment in HBO Max’s And Just Like That (beware, spoilers ahead). It all begins in the first episode where Big and Carrie joke about their Peloton, with Big insisting he can’t make Charlotte’s daughter’s piano recital because he “is spending the night at home with Allegra”—his Peloton instructor. Long story short, Peloton is mentioned explicitly throughout the show, making viewers wonder if the brand was in on all of the Peloton talk, or if it was intended to be an organic part of the plot. (Peloton told BuzzfeedNews, “Due to confidentiality reasons, HBO did not disclose the larger context surrounding the scene to Peloton in advance,” signaling the brand was not aware of exactly how they would fit into the show.) By the end of the episode, Carrie comes back to her and Big’s apartment where she finds him collapsed on the bathroom floor after suffering a heart attack, which occurred just moments after finishing his Peloton session. Not only were fans horrified to discover that the love interest (one that takes six seasons to finally end up with the main character) in one of their favorite shows was immediately killed off in the first episode of what was supposed to be a nostalgic reboot; fans (and Peloton) were shocked that it A) happened so randomly and B) that the show played it off so casually (Carrie doesn’t call 9-1-1, rather accepts it as her fate). Peloton’s feature in the show struck a strong chord, with Peloton’s shares falling after the premiere of And Just Like That last Thursday. *Enter Ryan Reynolds’ Maximum Effort agency.* In just 48 hours, Maximum Effort crafted a response to Peloton’s viral moment, getting Peloton instructor Jess King (Allegra in the show) and Chris Noth (Big) involved, while releasing a statement from a preventive cardiologist and advisor explaining Big’s lifestyle choices did put him at serious risk for a heart attack, and “riding his Peloton Bike may have even helped delay his cardiac event.” Peloton dropped the ad Sunday evening, featuring Noth and King enjoying a cozy night in, complete with a voiceover from Reynolds, “And Just Like That the world was reminded that regular cycling stimulates and improves your heart, lungs, and circulation, reducing your risk of cardiovascular disease … he’s alive” (the And Just Like That x Peloton roller coaster ride continued later this week, forcing Peloton to pull the ad due to sexual assault allegations facing Chris Noth). Not only is Peloton’s ad response an example of how brands can respond to viral moments—YPulse’s Pop Culture Redefined trend research shows 62% of young people say brands should comment on viral pop culture events to stay relevant with their generation—it signals how far the brand has come since their infamous 2019 Christmas spot that social media couldn’t help but flame.

Significant portions of Spider-Man: No Way Home were leaked online this week, and Sony worked quickly to remove them in an effort to keep the mystery alive ahead of the highly anticipated film.

Megan Rapinoe is partnering with Nike, granting the soccer star her own Nike logo that will add a “psychedelic” V (as in Victory Redefined) to the swoosh symbol.

Emma Chamberlain opened up about deleting TikTok, explaining she didn’t want it to control her life anymore.

This TikToker (known as the “Folding Queen”) is going viral for her videos sharing how to gift wrap everything from an iPhone to wine bottles.

YouTube is celebrating Minecraft’s milestone of reaching 1 trillion views on the platform via themed takeovers and sharing their favorite memories to #MinecraftMuseum.

Beyoncé launched a new TikTok account and is racking up followers as fans speculate what her first post will be.