This Is the Most In-Demand Gaming Console This Holiday Season 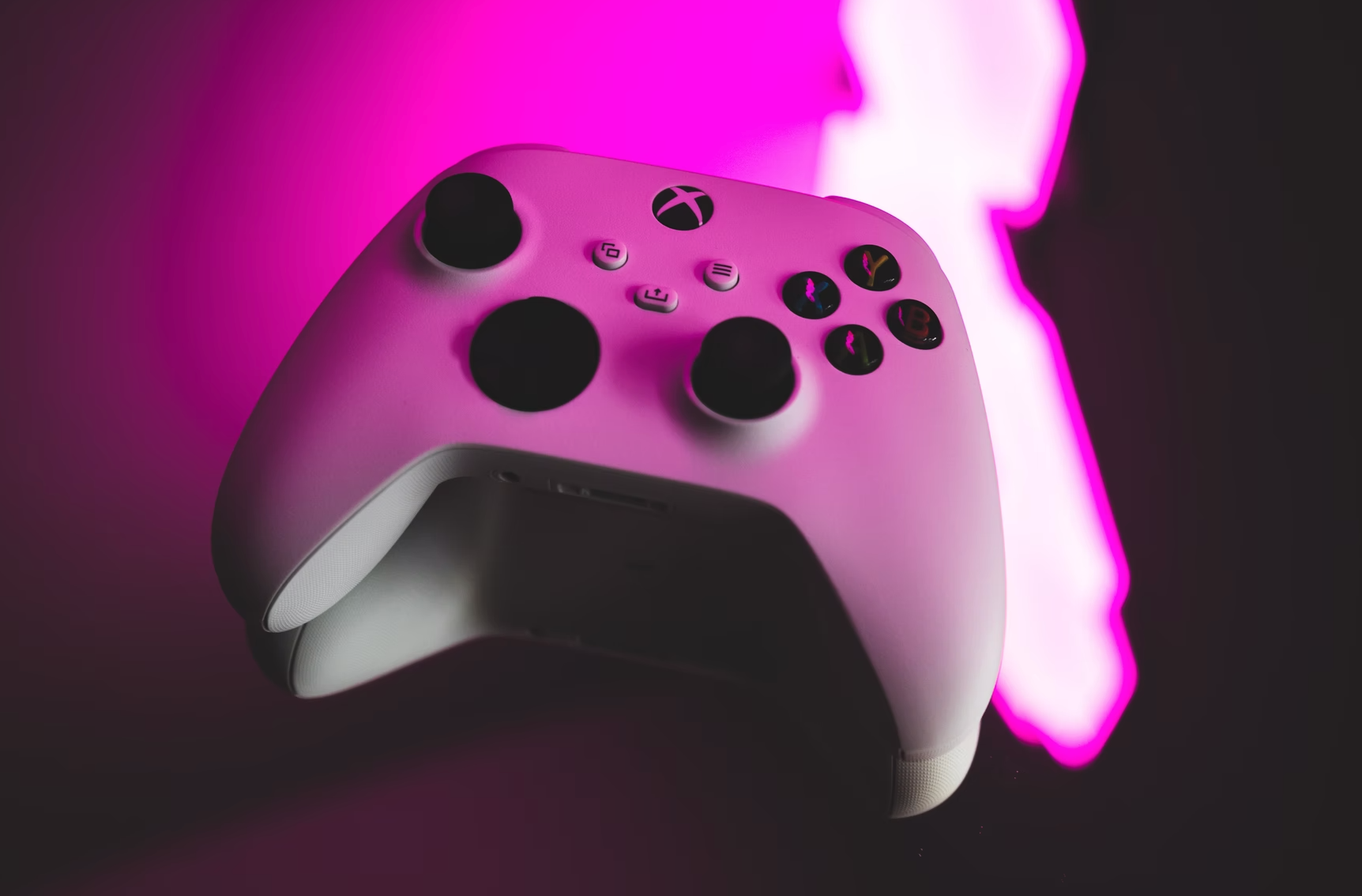 Gaming consoles are always some of the hottest gifts of the holiday season—but just how many Gen Z and Millennials are planning to get one this year?

The tradition of the great gaming console wars continued last year as Microsoft launched their new Xbox Series X and Sony released their PlayStation 5, and we tracked how many young consumers bought the new gaming consoles in 2020. But while there are no new consoles being released this year, they are of course still in demand this holiday. Consoles are always on Gen Z and Millennials holiday wishlists, and headlines report that the PS5, Xbox Series X, and Nintendo Switch consoles “remain hard to find this holiday season,” while some Costco locations in the country have reported that shoppers have been waiting in long lines to snag one. In fact, consoles might be even harder to get than usual: Reports of supply chain issues and COVID-related shipping delays have been dominating news cycles, and one industry expert told Yahoo! News that consoles are harder to get this year because system makers are selling fewer units and have a reduction in shipments as a result of the ongoing chip shortage.

And while there are no new console releases this year, gaming brands have certainly done a lot to keep fans interested, including PlayStation 5’s new video game releases and VR system to Nintendo’s constant updates for Animal Crossing: New Horizons (which, if you remember, was THE game of lockdowns). Perhaps the most notable is Xbox’s 20th anniversary, a major milestone Microsoft celebrated earlier this week. PlayStation even momentarily put aside their differences to congratulate their competitor via Twitter to recognize the huge achievement. During the Xbox Anniversary Celebration livestream on Monday, the company looked back at their history, the impact the console has made on the gaming community, and made several exciting announcements including the release of the new multiplayer mode for Halo Infinite, more backward compatible and FPS boost games, and revealed that they have an upcoming docuseries and TV show based on a character from Halo in the works.

But with supply issues and no new consoles incentivizing them to upgrade, just how many young consumers are actually planning to buy consoles for holidays, and which do they want? YPulse’s upcoming gaming report explores Gen Z and Millennials gaming habits in-depth, including whether they’re interested in buying consoles, which ones they’re buying, and how often they play video games. To find out how many were planning to buy consoles this holiday season, we asked 13-39-year-olds, “Are you planning to buy any new gaming consoles in the coming months?” Here’s what they tell us: 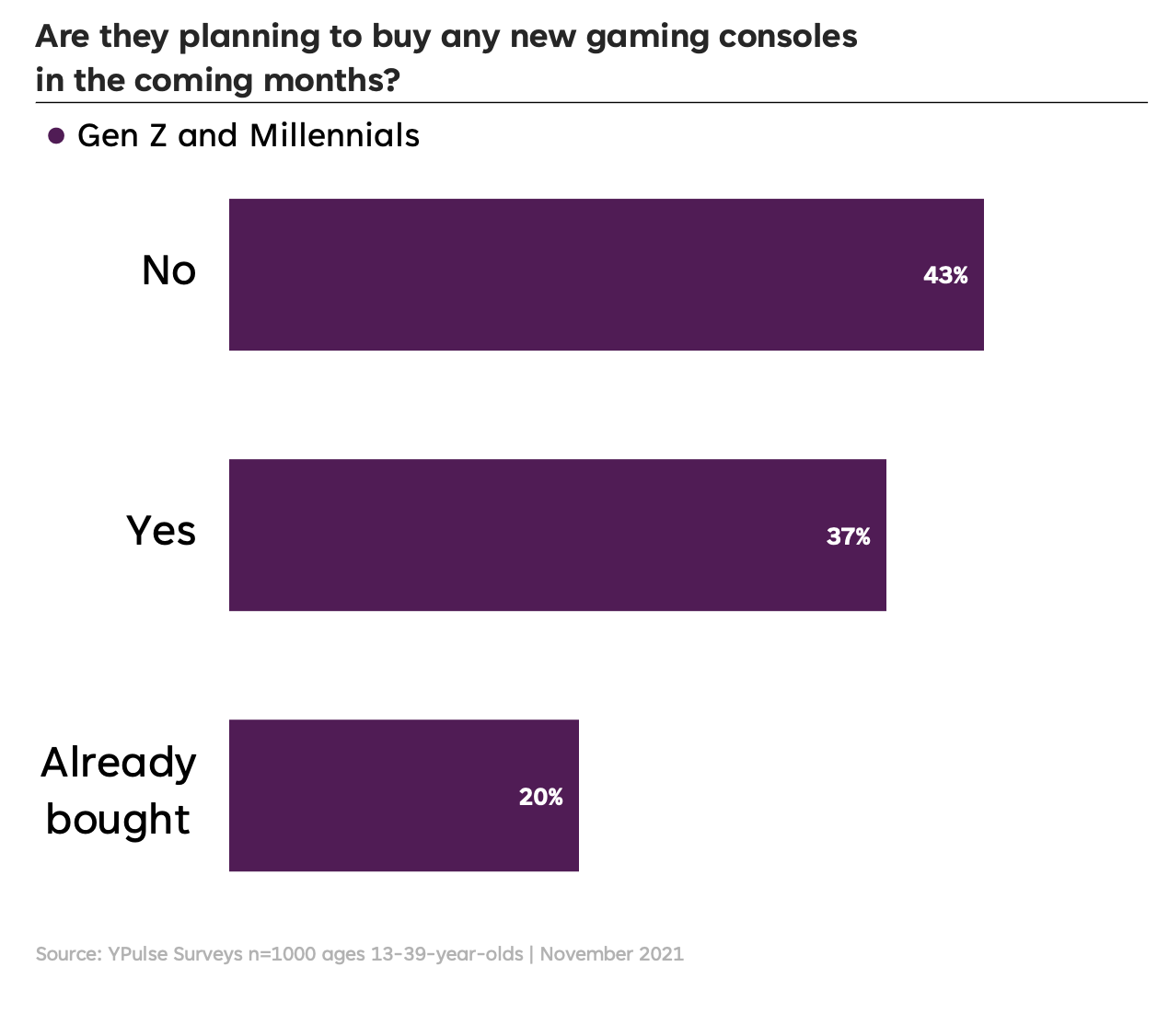 A third of young consumers say they’re planning to buy a console for themselves or someone else, while one in five say they already bought one for themselves or someone else. We told you that gaming consoles and video games are top items young consumers want to gift themselves for the holidays, and it’s clear a good portion of them are still planning to. This is close to the same number who planned to buy consoles in the lead up to the 2020 holidays, when 39% said they planned to buy one and 16% said they already had. Post-holidays, we found that a quarter of Gen Z and Millennials reported buying new gaming consoles. In other words, this year, it’s likely that not everyone who plans to buy a console will get their hands on one, but there’s little doubt that console sales will be strong again this year.  But some groups of young consumers are more likely to buy a console than others:

Gen Z is more likely than Millennials to have plans to buy a console this year, and males are more likely than females to say they’ll be buying one as well, in line with what we found last year. Meanwhile, half of Millennial parents say they plan to buy a console, and a quarter actually already have. Earlier this month, we had gaming consoles on the list of the hottest toys of the season according to Millennial parents and clearly they’re doing what they can to get their hands on them.

But while knowing how many are planning to buy a console is one part of the story, of course the competition between gaming brands is legendary, and we wanted to know exactly which consoles young consumers plan to buy or have bought: 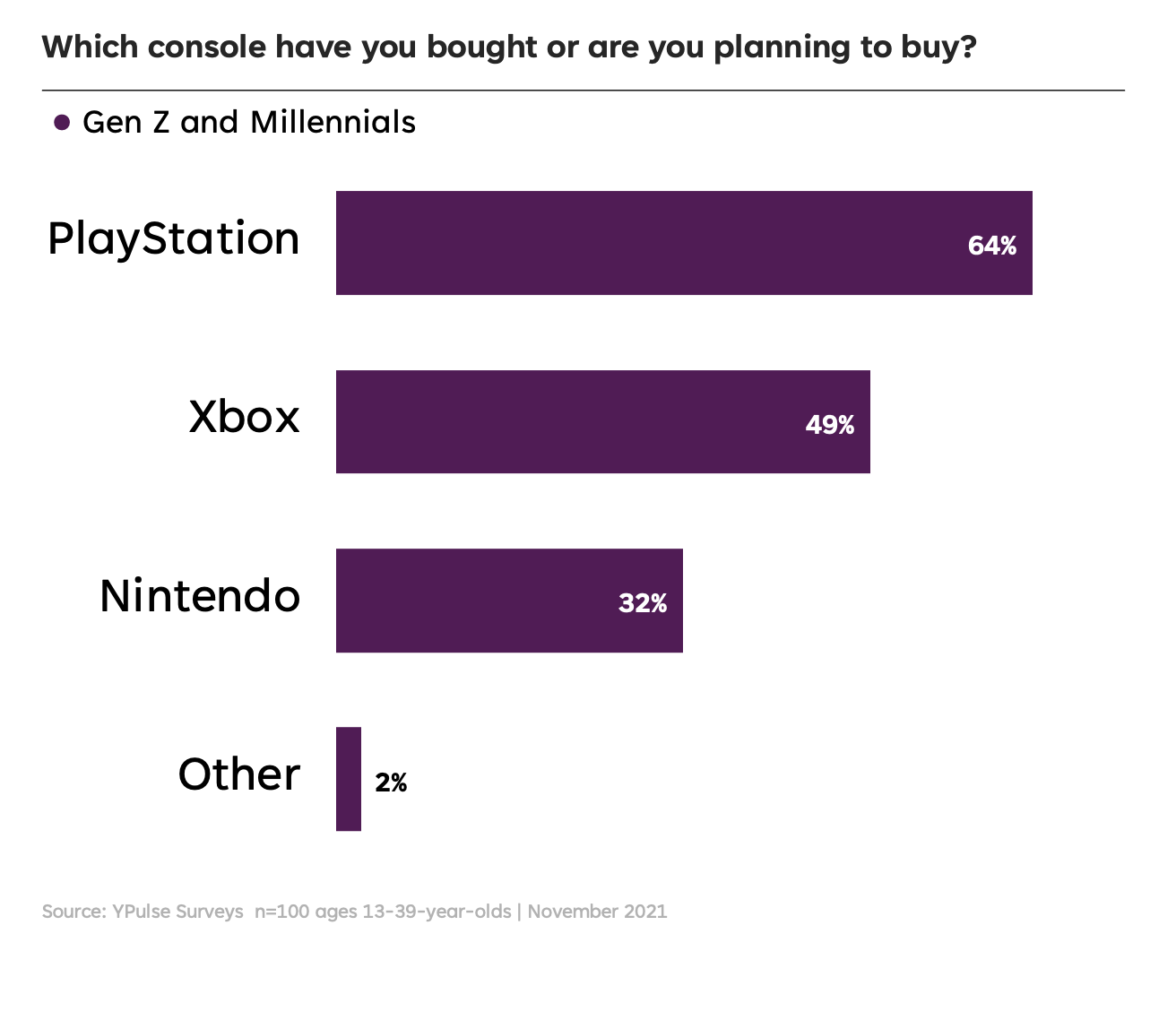 So the holiday tradition of console wars continues, even without new releases, and young consumers will clearly be clamoring to find the console of their dreams in the coming months.