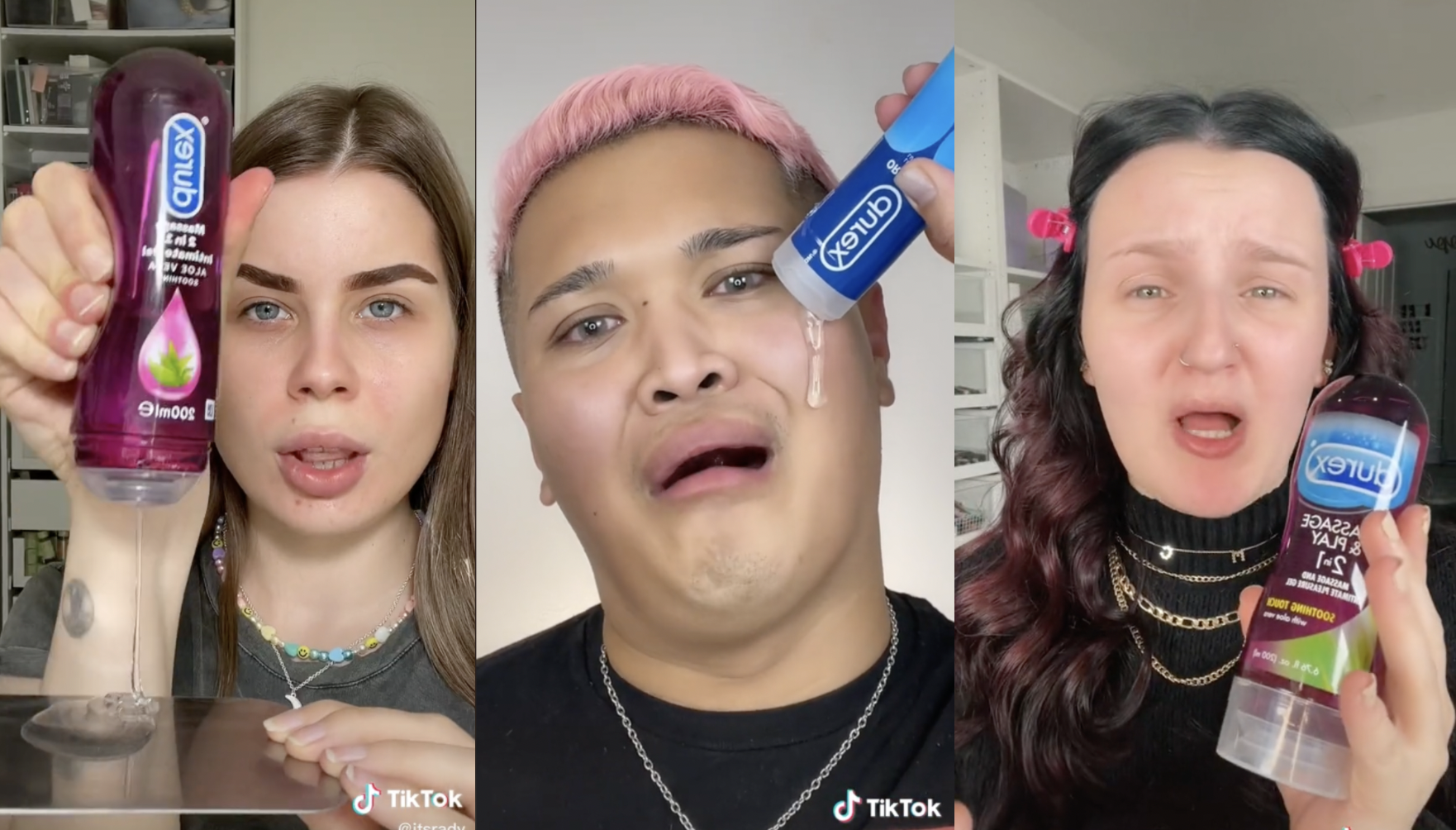 Weird makeup tricks are circulating TikTok, a viral pug named Noodle can predict if you’re having a #NoBones or #Bones day, Megan Thee Stallion and Keke Palmer are behind a trending TikTok sound, young Hooters employees made the restaurant change its uniform policy after going viral—plus more internet buzz on this week’s Viral List! 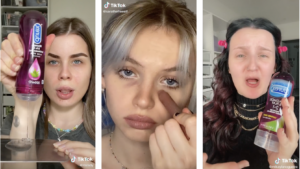 Weird Makeup Tricks Are Trending, Thanks to TikTok

Young people have a true skill for causing unlikely beauty styles, tricks, and hacks to trend—the latest of which is highlighting the appearance of one’s undereye circles. Yes, you read that right. Undereye circles are cool now according to TikTok and runway fashion shows. The trend kicked off at the beginning of the year after TikToker @saracarstens posted a video (garnering 8M views to date) of her undereye makeup routine as she swipes on a bit of color under her eyes and blends it in to accentuate the appearance of her undereye circles. The trick immediately went viral as TikTokers stitched the original video with their own to test if the trick actually improved their appearance, while others shared their conflicted reactions with the trend on Twitter and TikTok, wondering why one would want to make their undereye bags pop out more: “People on TikTok are drawing undereye circles on when I try everything to get rid of mine- pls,” according to one (rightfully) frustrated Twitter user. And as weird as it may sound for someone to make their undereye circles pop out in a fashionable way, Sara tells TMRW (a NBC- and Today-owned brand) that she was inspired to post the video because she has struggled to accept her own dark circles for years: “I have them genetically and they were always very intense. The first makeup product I picked up was concealer. Later I realized that it’s nothing to be ashamed of and they can actually look pretty cool, so I decided to embrace them and include them in a few of my makeup looks.” Since trending in January, undereye jewels and makeup (no, not concealer/foundation) have picked up on the runways, giving them a more defined-yet-polished look with a touch of eye shadow and/or delicate gems. Celebrities and models including Ella Emhoff and Ben Platt accentuated their undereyes with jewels at the 2021 Met Gala while models at the Del Core Spring/Summer 2022 runway rocked bright undereye shadow looks. Meanwhile, another unlikely makeup trick is trending: TikTokers are using #lubeprimer (8M views) before applying makeup and nearly 10 million people have made videos testing out the trick. The original video that kicked off the weird trend is from @itsrady, dubbing the lube primer as one of the “best makeup hacks” as she grabs a bottle of Durex Massage and Play 2-in-1 and slathers it on her face before applying foundation. Teens and makeup gurus are testing the hack, including makeup guru Sean Anthony (@seananthonyv) who shared how the lube performed way better than a real makeup primer. Mikayla Nogueira (another popular makeup guru), disagrees however, after testing out the exact lube from the original video with her own makeup, which ended up giving her skin a very tacky texture as it failed to mix together. Dermatologists are also weighing in, including Dr. Joyce Park who explains the trend isn’t so great for skin: “Many lubricants contain castor oil, which, due to its occlusive nature, can clog your pores, act as a magnet for dirt and microbes in the environment, and worsen acne breakouts.” While lube as makeup primer may work for some (like Sean Anthony), we’re taking Nogueira’s and Dr. Park’s trusty advice and forgoing #LubePrimer on this one. 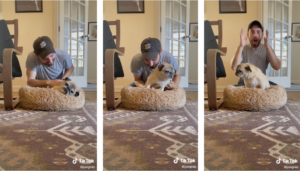 This week on TikTok, a 13-year-old pug and his pet parent Jonathan Graziano (@jongraz) wake up each morning to do one thing: predict whether you’re going to have a “Bones Day” or a “No Bones Day.” According to Graziano, a “Bones Day” is the best kind of day, one that Noodle predicts by staying propped up in his dog bed when Graziano wakes him up, whereas “No Bones Day” is one of those “I can’t fathom getting out of bed” kind-of-days signified by Noodle’s decision to flop back in his dog bed after being woken up in the morning (a.k.a. not having any bones to move his body). #NoBones has surpassed 300M views on TikTok while #NoodleTok counts more than 135M views and #BonesDay has 99.2M views. Graziano has been posting “No Bones” and “Bones” videos since joining TikTok in 2020 and it wasn’t until this week that the videos garnered mass attention—Graziano’s followership has grown from 50,000 to 1.7 million in just a few days. TikTok is obsessed, and users are creating their own Noodle-inspired videos: @www.emma.org posted a clip set to her own sound saying, “Do I believe in astrology? No. Do I believe in that dog who predicts whether or not it’s going to be a good day based on if they wake up with bones or not? Yes.”; @emmalinechilds posted a video getting ready for her morning commute saying, “Mercury might be in Gatorade, but the pug had bones, let’s get this bread.”; and @abbylmiller11 tragically notes in another TikTok, “The fact that I literally woke up early, got dressed, and decided to finally be productive just to find out it’s a no bones day.” “No Bones Days” aren’t necessarily negative, either, as Graziano explains in a recent #NoBones video: “Today we reclaim the ‘No Bones Day’ as a day for kindness and self care and just listening to what you need.” In response to Noodle’s viral popularity, Graziano opened an online fan store called The Noodle No Bones Boutique, selling “Bones or No Bones” clothing, blankets, mugs, face masks, and greeting cards. The trend has gotten so popular that software engineer Jake Kaplow created a notification site that sends a text each morning to let you know if it’s going to be a “Bones Day” or not, so it’s safe to say that the weather isn’t the only things we need to be checking before starting the day. 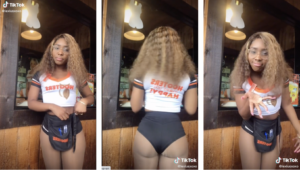 After recently changing its uniform policy for restaurant workers, young Hooters employees took to TikTok to share their thoughts on the new outfit, specifically the new bottoms meant to replace Hooters’ original bright orange (already short) shorts. @sick.abt.it was one of the first to share a post about the new shorts, showing the drastic difference between the original orange shorts and the new pair which are meant to mimic “high-waisted bikini bottoms” according to Hooters. The video has garnered more than 15M views and over 6,000 comments from Hooters employees and people who are fed up over the new design: one user shared their frustration, “The old shorts were actually cute and made sense. They were like boyshort style. There needs to be a woman approving these clothes obviously”; another user’s comment reads, “Why even wear pants at that point? I have underwear that have more coverage than that…” Hooters locations in Texas were the first to roll out the new uniforms, and once more restaurants across the country started integrating the new design, young employees started building a community on TikTok over their frustration. Lexius Stokes (@lexiusxoxo) shared a post on TikTok garnering 683K views with the caption: “soooo Hooters got new panties. I mean shorts,” and tells BuzzFeed that at first she wasn’t opposed to the new design, but after wearing them for one shift she struggled to make them work: “With the tights, that right there was an issue [already] because in the back you could see the box on the tights because of how the shorts are cut.” And while many comments have said “Oh, this is what [you] signed up for,” Stoke explains that no one signed up to be wearing this type of uniform as it was clearly made without any regard to a workers’ comfort or body. Hooters has responded to its workers’ public outcry on social media by revoking their new uniform policy, and according to a spokesperson, restaurant workers can now choose between wearing the new (extra short) bottoms or the original boyshort style. Stokes says that while Hooters may have had good intentions by updating their bottoms, they failed to put their workers’ needs first: “I feel like it’s a whole new generation of girls that work at Hooters. BBLs are a thing, having a bigger behind is a thing, and I feel like Hooters was trying to stay up to date with how society is, but the way they went about it was the wrong way.” 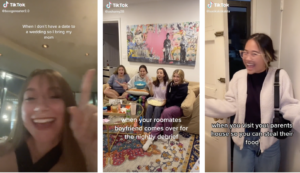 If you’ve been on TikTok in the last few days, you’ve likely come across videos of users lip syncing the words to the sound, “Oh, oh, oh, oh, oh, oh, oh I know it ain’t, I know it ain’t, it’s the Stallion. You know it’s your girl.” The sound is part of a larger “You Know It’s Your Girl” trend (#ItsYourGirl counts more than 200M views) that all began at the 2021 Met Gala when Keke Palmer greeted Megan Thee Stallion with that exact phrase before their red carpet interview. @contejasmusic remixed the sound by adding piano to Palmer’s interview, and TikTokers are using it to share moments when they’re excited to see someone even in the most mundane situations, using overlaid text in their clips to detail the moment while the camera pans in the last line (“you know it’s your girl”) to the subject they’re excited to see. For example, @oshamy posted, “when your roommates boyfriend comes over for the nightly debrief” while the video pans to the boyfriend in question; @boogereater2.0 shared, “when I don’t have a date to a wedding so I bring my mom”; and @saskskskia posted, “when you visit your parents house so you can steal their food.” The videos mimic Keke Palmer’s joy as she greets Megan Thee Stallion at the Met Gala, and more than 250K videos have been created using the sound. YPulse told you about TikTok’s influence on the music industry, and leveraging trending sounds is one way to create content that’s in tune (no pun intended) with what young people are already creating on the app.

Netflix’s Co-CEO Ted Sarandos says he “should’ve led with a lot more humanity” regarding his decision to back Dave Chapelle’s special The Closer amid allegations from trans employees and allies.

Grace Xu is garnering attention on TikTok for using “plarn” (a.k.a. yarn made out of upcycled plastic) to crochet trendy pieces.

Billie Eilish is getting into beauty with the launch of her first cruelty-free fragrance that she describes as a “mentally sexy” blend of vanilla, amber, musk, cocoa, rose, and wood.

Netflix has ordered XO, Kitty—a TV series spinoff of To All The Boys I’ve Loved Before.

Billy Porter is holding Vogue accountable for their December 2020 issue featuring Harry Styles in a dress on the cover, explaining how he has championed gender-bending fashion from the start while receiving little to no credit.

Disney is delaying film releases for six upcoming Marvel movies that were set to premiere in 2022 and 2023, starting with Doctor Strange in the Multiverse of Madness.

You fans are calling out this can’t miss filming mistake from season three on TikTok.