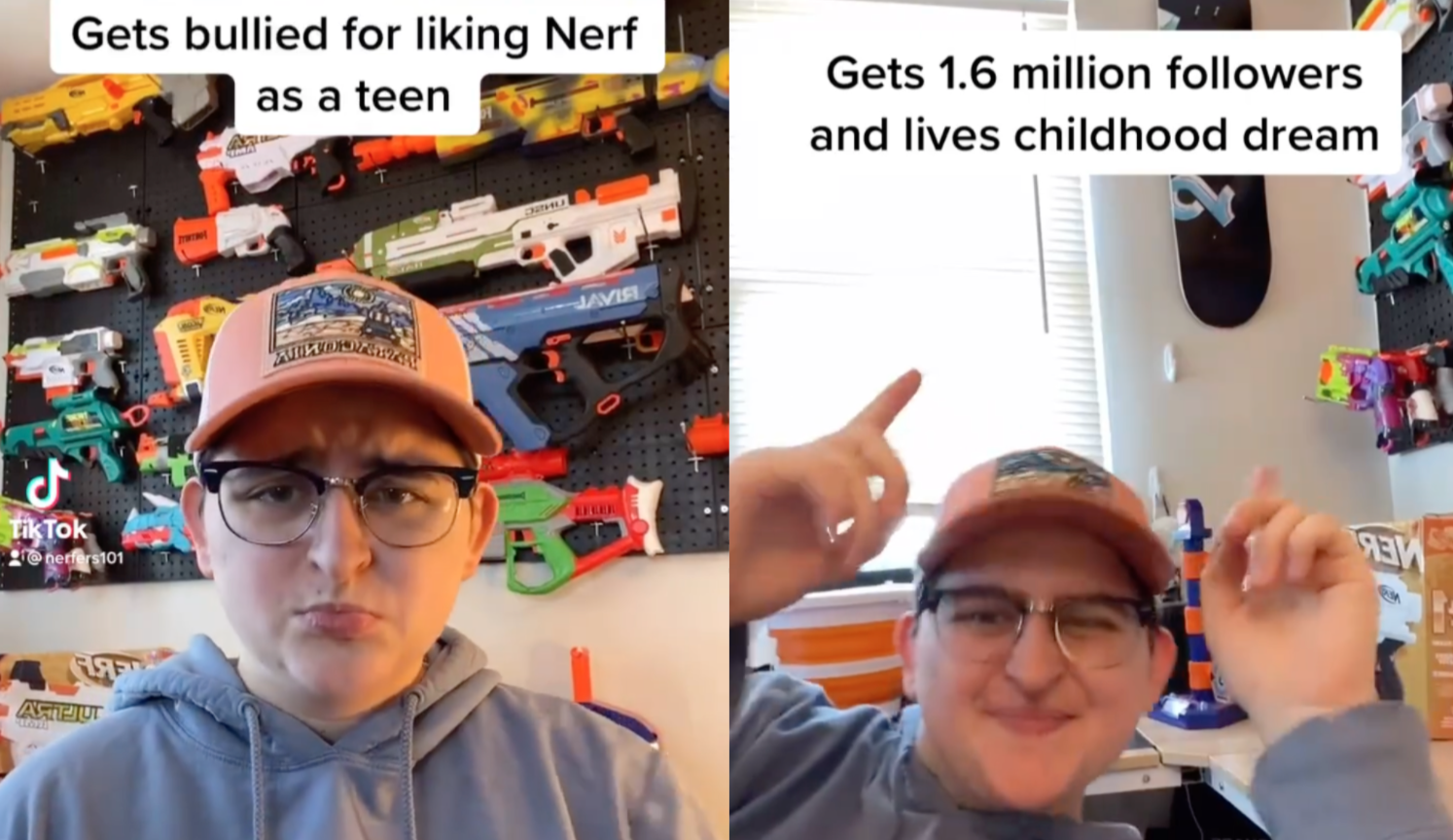 Last week, we used our on-demand survey platform PULSE to ask young people if they would use social media to apply for jobs, and an overwhelming 75% of 16-34-year-olds say they would—and the launch of the new #TikTokResumes feature is making social media job applications more of a reality. And while most social platforms don’t have career-focused capabilities, that’s not stopping brands from using those social platforms to promote jobs that uniquely appeal to Gen Z’s interests and habits (a.k.a. spending a ton of time on social media). Our recent employment and career goals behavioral report found that 78% of 13-39-year-olds say it’s important that they have a job that they enjoy doing, and brands are promoting fun, dream jobs for Gen Z as a way to reach the next generation.

Of course, providing a position and salary is valued as the pandemic continues to affect young people’s employment. But creating roles designed for young people is not only a great way for brands to support young job-seekers, it also serves as a marketing tool to help young consumers become more interested in their brands. For instance, at the start of the pandemic when internships were being cancelled for many, beer brand Natty Light set out to hire remote interns to develop its next flavor, asking applicants to post “a photo, sketch, doodle or tweet of their idea” on social media using the hashtags #NattyItern and #contest. While the brand of course only hired a handful of the applicants, #NattyIntern has been viewed 1.2 million times. Since then, other brands have followed suit, and creating Gen Z dream jobs that are touted on social media has turned into somewhat of a marketing trend. Here are three brands using newly launched roles to reach young consumers: 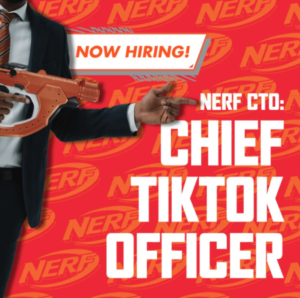 Last March, the Hasbro-owned toy brand put out a call for a Chief TikTok Officer (CTO) to head the company’s marketing and help them connect with Gen Z customers. The role was designed to be three months long with a pay of $30K. An extra perk? The chosen candidate received “a massive amount of Nerf products.” As part of the job, the new hire is expected to create ten to 12 videos on TikTok per month, and meet with Nerf’s marketing team (who describe themselves as “Desperate Millennials trying to appeal to Gen Z”) weekly to brainstorm new ideas. And since the role was launched in the midst of the beginning of quarantines, it is completely remote with most colleague interactions held through Microsoft Teams or Zoom. Interested applicants were asked to “post the perfect Nerf related TikTok video” on the app using the hashtag #NerfApplication, which received 109.5 million views. Then, in April, the company announced that they were bringing on Sophie Jamison, a junior at the University of Southern Maine, as the new Chief TikTok Officer—who has been a devout Nerf fan since she was a child. Her @Nerfers101 on TikTok currently has 1.9 million followers. YPulse’s Playtime trend report found that 72% of 13-39-year-olds have purchased a toy for themselves in the past year, with nostalgia and stress relief playing a hand in their influence to buy toys, so working for a toy brand like Nerf is something that should appeal to their interests. But a role at Nerf that consists of making TikTok content takes it to the next level of dream job status. 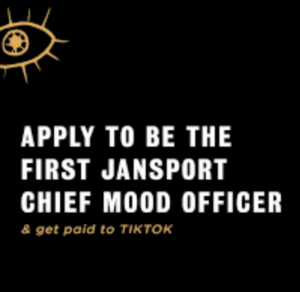 Last month, JanSport debuted Disorientation, a digital comedy series on YouTube made by Gen Z for Gen Z, hosted by drag queen Jan Sport and starring rising comedians and influencers like Caroline Ricke, Noah Miller, Boman Martinez-Reid, and many others. As part of the series, JanSport also put out a job listing for a Chief Mood Officer (CMO) whose favorite pastime “is sending memes to friends, is an authentic advocate for self-care and above all, is an embodiment of JanSport’s mission.” According to JanSport’s Head of Marketing Monica Rigali: “It’s not about how much they have on their resume, or what school they attend, but more so how they’re able to relate to their peers in a creative, fun and authentic way.” The lucky candidate will be expected to provide some relatable comedy to the brand’s social feeds throughout the 2021-22 school year, and will receive “a comprehensive compensation package” that will enable them “to excel in their role and alleviate sources of stress in their lives” as well as $3,000 in cash, with $1,000 going toward textbook payments, a monthly JanSport wellness package with new product and self-care items, and a home studio to produce top tier content. As part of the role, the CMO will develop weekly content on TikTok for the brand’s channel including skits, interviews with the creators themselves, product reviews, and more. From addressing mental health to sustainability, JanSport has been tackling hot button issues to stay relevant with Gen Z, and creating job support is certainly a way to do that. 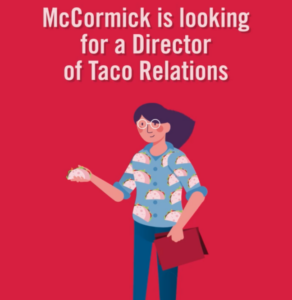 Taco about a dream job: Last month, the spice company launched a nationwide search to fill a part-time Director of Taco Relations consultant role specifically designed for “true taco fanatics” who want to “share their love of the dinnertime staple with other taco devotees.” The main responsibilities include working with McCormick’s branding team to develop recipes using their Taco Seasoning mix, and travelling across the country to talk about taco trends with fans as well as chefs. They will also visit the company’s global HQ to take “a taco immersion course” and help them develop engaging social media content. The new hire will be expected to work up to 20 hours a week for up to four months, and the position will pay $100,000 and will be paid out at $25,000 per month. They’ll also be including other perks, like a “hefty supply” of McCormick Taco Seasoning and other products from the brand. To apply, interested applicants have to send an application via the link that the brand circulated on their Twitter account—and based on reactions on the platform, a lot of people were interested. According to McCormick CMO Jill Pratt: “McCormick’s Director of Taco Relations will ultimately honor and support the millions of Americans that rely on our taco seasoning everyday while keeping McCormick at the forefront of the tacos of tomorrow.” YPulse’s recent food shopping and trends report found that 62% of 13-39-year-olds consider themselves a “foodie,” so having a role focused on food coupled with travel and social media creation is certainly a recipe for success in reaching young consumers.

North America
Young People Are Saying Goodbye to the iPod on The Viral List
TL;DR: RIP, iPod—Apple is going to discontinue making the devices after ne...
North America
How P&G Is Supporting Gen Z Women in STEM
The entrepreneurial arm of this consumer goods brand teamed up with Her Campus Medi...
North America
These Are the Entertainment Genres Gen Z Is Watching More Than Millennials
The top 10 types of video content Gen Z and Millennials’ are watching weekly are no...