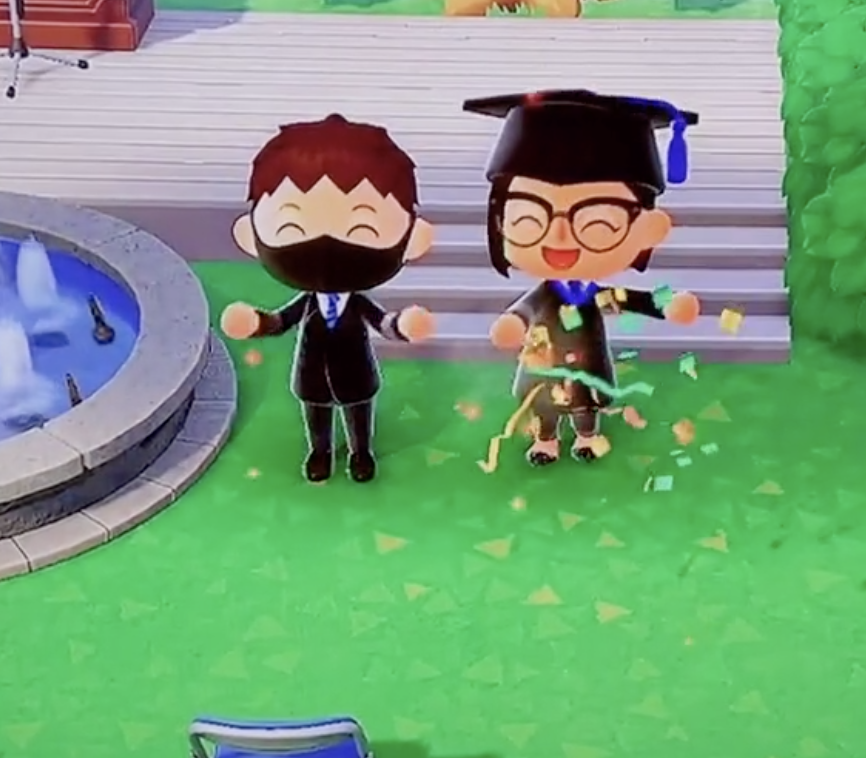 Gen Z is already missing out on milestone events that are impacting their social lives, experiences, and the future of their education and careers. YPulse’s research shows that 66% of Gen Z feels their generation has been robbed of life milestone moments because of COVID-19. Of course, these students have gotten creative to make digital versions of that they’re missing out on IRL, making yearbooks on Instagram, hosting graduation ceremonies in Animal Crossing, and showing off their prom looks on social media even though a dance is out of the question.

Many (many) brands have also stepped up to create virtual events like proms, graduations, and even networking and job opportunities to make up for the lost in-person memories and traditions. While there is of course opportunity for other brands to step in and make similar contributions (especially in the area of career support) this year, these virtual milestones are significant for another reason as well: Because the future of in-person education and large-scale gatherings is in question, these kinds of online celebrations and shows of support could become a regular part of reaching young consumers of the next generations. Even in the “short” term, the class of 2021 isn’t likely to have these major milestones disrupted as well, so brands can expect that supporting what were once more private and in-person events will at least happen again next year. Here’s the blueprint that has been created so far: 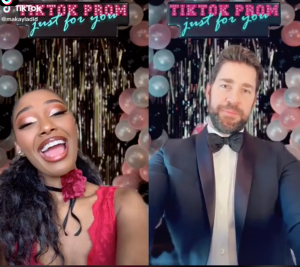 Over a third of young students told YPulse that their prom was cancelled because of COVID,

From lifestyle publications to social platforms, brands have come up with ways to host the annual end-of-the-year dance for high schoolers. Teen Vogue was one of the first brands to announce that it was hosting a virtual prom, with a virtual promposal contest hosted by Axe, and a virtual prom afterparty thrown by Chipotle, hosted by YouTuber David Dobrik. Speaking of YouTube, popular uplifting channel “Some Good News,” developed by John Krasinski, hosted a prom on social media using the hashtag #SGNProm with surprise appearances from Gen Z favorite musician Billie Eilish and the Jonas Brothers. But perhaps the prom “event” that pulled in the most views was TikTok’s #TikTokProm—a weeklong series of events which consisted of hashtag challenges, nightly live stream events with creators, celebrities, and musicians, and creative effects (triggered by hashtags #PromPortrait and #VirtualProm) that transported users to prom-esque backgrounds.

Fashion and food brands are getting into the virtual prom space as well. American Eagle threw a prom on Zoom with Cheers’ Jerry Harris as the emcee and DJ and guest performances from Tinashe and TikTok star Addison Rae. Mondelēz’s brands Chips Ahoy and Sour Patch Kids have teamed up with DJ Steve Aoki to host “The Sweetest Prom Ever” for 17-to-20-year-olds, to be live streamed on Aoki’s YouTube as well as on Chips Ahoy and Sour Patch Kids’ channel, Instagram, and Twitter. Students have the chance to win giveaways and one will win a do-over prom event for their classmates once lockdowns are over. Fast food chain Jack in the Box hosted #PromInTheBox (the hashtag drew 30 million impressions on social media, and six custom Giphy stickers generated more than 12,300 views). While they hosted private Zoom proms for two schools in California, they also expanded it to the public with live streams on Instagram and Twitch and tapped Diplo to perform a DJ set. The brand integrated sponsors digitally for physical deliveries, providing UberEats codes for discounted and free meals, and promo codes for flowers from 1-800-Flowers, dresses from Lulus and tuxedos from Black Tux, for viewers to have their prom necessities.

Finally (though our roundup here is hardly exhaustive), in a move to celebrate prom and encourage voting among young people, MTV teamed up with Michelle Obama’s organization When We All Vote to host a Prom-athon. Previously, MTV’s 2020 Prom Challenge selected 20 winning high schools across the United States that integrated voter registration “in the most creative and impactful ways.” Those 20 schools will be highlighted when Prom-athon kicks off later this month. 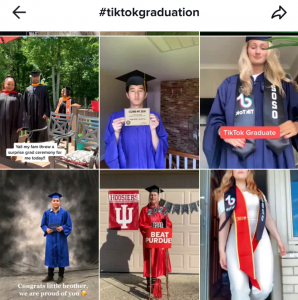 Our COVID-19 special report on education that 30% of students have had a graduation ceremony cancelled because of COVID-19. And while, 50% of them still have positive feelings about graduating, there has been a clear opportunity to step in and make this major life event special for the class of 2020 even if they can’t have the traditional celebrations and ceremonies. Brands and celebrities have created a wealth of content devoted to commemorating the occasion, and boosting the spirits of a class graduating into a pandemic.

After John Krasinski of YouTube’s “Some Good News” hosted a virtual prom, he tackled graduation, using the hashtag #SGNGraduation to celebrate high school seniors. So Teen Vogue planned a virtual graduation ceremony that will take place later this month with a commencement speech from editor Anna Wintour. Teen publication Her Campus is broadcasted #ImStillGraduating, a ceremony on a custom site as well as their social channels. The brand used Vimeo to stream a combination of live and pre-recorded content with speeches from various celebrities, and invited students to speak or perform. Natural Light, which has been focused on college students, hosted a commencement ceremony on Facebook Live for graduating seniors, featuring speakers Mark Cuban, actress Jane Lynch, and Barstool Sports CEO Erika Nardini.

In fact, big-name, big-budget commencement speeches have become a major trend. This past Saturday, two major graduation events were nationally broadcast in honor of graduating high school seniors: CNN’s “Class of 2020: In This Together” and LeBron James’ “Graduate Together: America Honors the High School Class of 2020” which featured commencement speeches from Barack Obama, Lana Condor, Timothée Chalamet, Charli and Dixie D’Amelio, David Dobrik, and other celebrities and influencers. Off the TV-screen, iHeartMedia started “Commencement: Speeches for the Class of 2020”—a project and podcast for both high school and college seniors that feature pre-recorded commencement speeches from celebrity guests like Bill and Melinda Gates, Jimmy Fallon, Kesha, DJ Khaled, John Green, and many others. Along with appearing on the podcast, the speeches will broadcast on iHeart Radio stations around the country.

Of course, social media and video platforms are also full of commencement content. The Obamas will also be headlining YouTube’s graduation ceremony “Dear Class of 2020” along with Lady Gaga and BTS with special appearances from other artists like Zendaya, Chloe x Halle, and Alicia Keys. Facebook and Instagram hosted a week of graduation-themed events ending with the big ceremony hosted by The Office stars Mindy Kaling and B.J. Novak, and featuring speeches and appearances from Oprah, Miley Cyrus, Cardi B, Kristen Bell, Selena Gomez, Awkwafina, and many others. And over on TikTok, #TikTokGraduation has trended with 942.7M views so far, as users are encouraged to “show how [they’re] getting in the graduation spirit.” Like TikTok’s prom content, the event also features live streams dedicated to the class of 2020, as well as ”an incredible afterparty”—all taking place on the app of course. 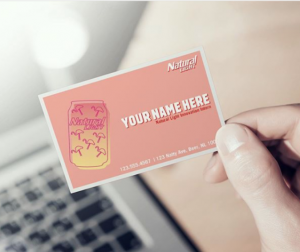 YPulse’s education interrupted report found that 17% of Gen Z have had their summer internships cancelled. These first cancellations could be the beginning of a future where more internships are conducted remotely. In fact, a Yello survey found that 24% of students have been told their internship will be virtual—and some brands and companies have quickly pivoted to make that a possibility for the class of 2020. Bank and finance companies like Citibank, PricewaterhouseCoopers, Morgan Stanley, and JPMorgan all made the decision to go forward with their internships, but just make them virtual, with shortened programs. For example, PwC’s traditional 10-week internship program that usually hosts 2,800 undergraduate summer interns has been shortened to two-week paid virtual one. Facebook has also moved their summer internship program to a virtual format.

But some brands are also finding ways to turn virtual internships into a marketing opportunity. Along with their commencement ceremony, Natty Light found a way to support graduating college students, hiring remote interns to develop its next flavor. Along with a job application, they’re asking prospective candidates to post “a photo, sketch, doodle or tweet of their idea” on social media with the hashtags #NattyIntern and #contest. Gen Z’s career prospects have likely been permanently changed by COVID—and brands giving opportunities to get a leg up or exciting experience could gain their affinity and loyalty.