What Will Prom Look Like for Gen Z This Year? 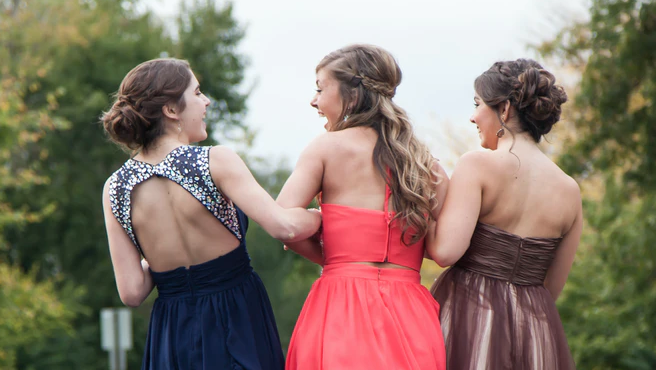 It’s prom season again, but what does that mean for Gen Z teens in the wake of the pandemic? After most were cancelled last year, we asked high schoolers how their schools will be handling the big events in 2021…

Many of Gen Z’s milestones were upended last year with many of them shifting to digital spaces—and with prom season falling in the months immediately after lockdowns began, it was one of the first to be impated. YPulse’s Life Plans, Rewritten trend research found that half of Gen Z high schoolers says that going to prom is important to them, and over a quarter say that a school dance was cancelled for them because of COVID last year. The cancelled event became somewhat of a starting point for digitizing celebrations at the beginning of the pandemic. With plenty of high school students all dressed up with no place to go last spring, many brands stepped in and hosted their own events online. TikTok used the hashtag #TikTokProm (which generated billions of views) for a weeklong series of events. American Eagle, Jack in the Box, Teen Vogue, and MTV all hosted their own virtual events while some young people got creative by making their own digital proms within video games like Animal Crossing: New Horizons, or showcased the outfits they would’ve worn to their would-be prom on social media.

A year later, and some in-person experiences are beginning to ramp back up. But in 2021, will proms still look different? To find out if the milestone will be impacted again, we asked high schoolers, all about their schools’ prom plans. From their responses, it seems that prom is likely to look different for many teens again this year: 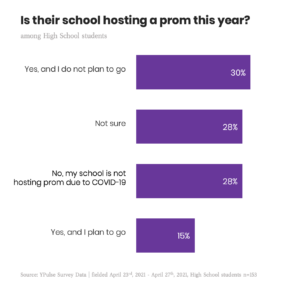 Roughly half (45%) of high schoolers say that their school will be hosting a prom, while a quarter (28%) are not sure, and another quarter (28%) say their school will not be hosting a prom this year because of COVID. But it is also notable that of those who say their school will be having a prom, only 15% say they plan to attend. This leaves a potential majority of Gen Z teens who won’t be having a prom this year. While some of those teens might not have wanted to attend, it’s safe to say that there is a case for brands to step in and create some digital prom celebrations for Gen Z again this year.

Even at those schools that are planning a prom, things might be reworked to keep safety a priority. Teen Vogue reported that Gen Z students have been coming up with safer, alternative prom events. In some cases, student councils around the country have opted to host formal casino nights with poker tables instead of a dance, where students can still properly wear their prom dresses and tuxes while social distancing. Some have opted to move their venues to a big backyard or warehouse. We dug further in our survey to find out how many schools are planning an alternative event: 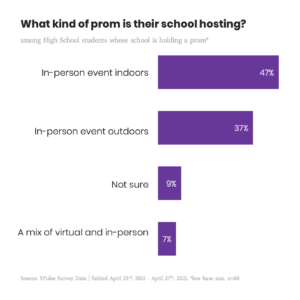 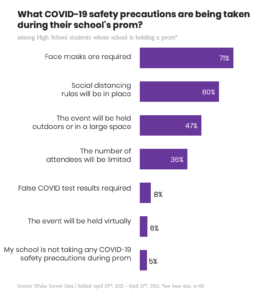 The majority of students whose schools are throwing a prom say their school will be taking some kind of safety precaution: 71% say that their schools are requiring face masks, while 60% say social distancing rules will be in place. Forty-seven percent say the event will be held outdoors or in a large space, while 30% say the number of attendees will be limited. The numbers were much lower for requiring false COVID tests (8%), and holding virtual events (6%). Finally, only 5% say their school isn’t taking any COVID-19 safety precautions during prom, which shows that the majority of schools are at least taking one or a few safety precautions when it comes to their events.

While the number of students who say that their schools won’t be holding a prom will certainly put a dent in spending for the event this year, brands should also know that 38% of all high school students plan to spend on a prom outfit, and 26% say they’re interested in sharing pictures / videos of their prom outfit on social media (that goes up to 36% among high school females). Prom will undoubtedly still spark social media moments, and though the event won’t be completely COVID-free this year, many will be finding ways to celebrate in-person.