How Many Gen Z & Millennials Own Smart Speakers Now?

“Ok Google, how many young consumers own smart speakers?”

In early 2019 (which we know now feels like 10 years ago), YPulse did a deep dive on the rise of smart speakers among young consumers, and found voice activated technologies were becoming more mainstream with Gen Z and Millennials—and Millennial parents—the earliest adopters of the tech.

Of course, lot has changed in a year, so our recent survey on mobile tech checked back in to ask how many currently own a smart speaker. The results show just how much smart speaker ownership has been growing among these generations: 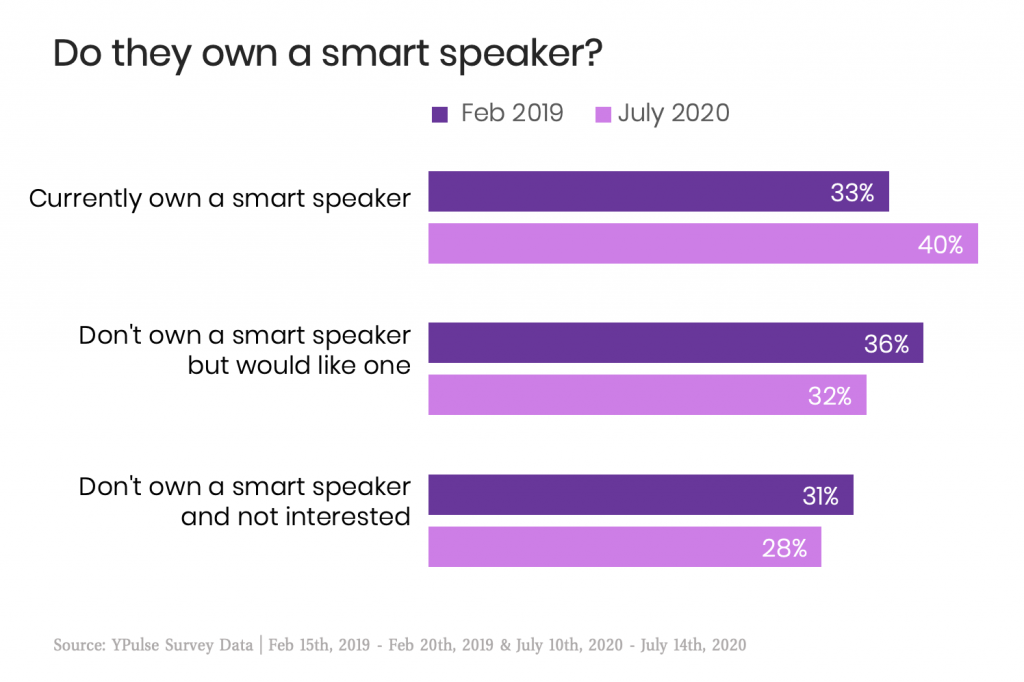 In February of last year, a third of 13-36-year-olds reported owning a smart speaker, and today that number has grown to 40% of 13-39-year-olds. That’s an over 20% increase in ownership over the course of a year and a half. Of course, as with so, so many trends, COVID has acted as an accelerant for smart speaker use. The SVP of the Amazon Alexa unit told GeekWire they’ve seen “a huge increase in the use of voice in the home” during the quarantines. According to the ecommerce giant, customers asking Alexa cooking-related questions was up more in April than Thanksgiving week of last year. Music listening through Alexa devices is up compared to last year as well, while skills usage jumped 65% globally in between May and July. As Millennials and Gen Z spend more and more time at home, their use of tech in the home is intensifying.

But our data shows that it’s not just that use has increased, but ownership as well. Young consumers stuck at home have been motivated to make those spaces more relaxing, comfortable, and multifunctional, and smart speakers are clearly benefitting. In fact, our No Place like Home trend research found that 18% of young consumers say they have purchased a smart speaker for their homes since COVID started. Some of these purchases were likely existing owners purchasing additional smart speakers to have multiple in the home, and upgrades to existing tech.

Of course, smart speaker ownership is not identical across age groups. When we look closely at the data, it’s clear that it’s a more mature purchase: 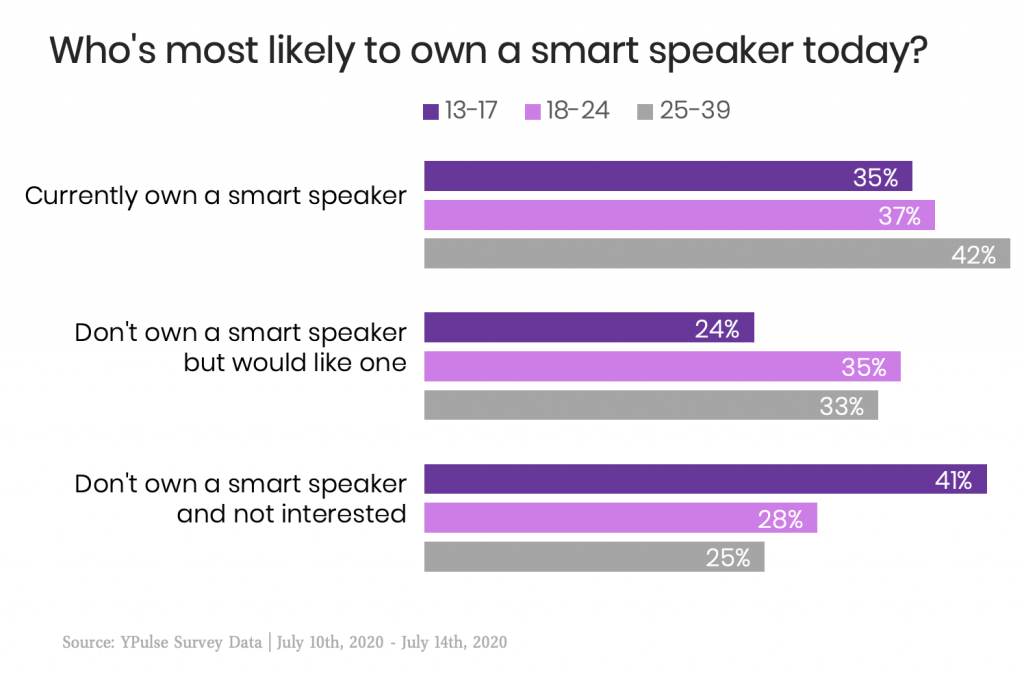 There are likely several reasons behind the differences between age groups. Gen Z has less disposable income, and are far, far less likely at this stage in their lives to live in their own spaces, while the majority of Millennials have their own homes to deck out with convenient tech (whether they own those homes or not.) But there’s another interesting detail in the data: a full 41% of 13-17-year-olds say that they aren’t interested in owning a smart speaker at all. It is possible that Gen Z, who has grown up with their mobile phones in hand, can’t see the use of a speaker that does what they’re phones are doing for them now. Or perhaps they can’t understand the appeal of a device without video. Regardless, there’s clearly some work to be done winning over the next generation of smart speaker owners.

In the meantime, Millennials are fueling the smart speaker boom, and a third of Millennials who don’t yet own a smart speaker are interested in owning one, indicating that those ownership numbers could continue growing for the generation. For brands, there’s a clear incentive to start investing in voice marketing to reach them.

There are 100 days until Christmas, but three big signs that young consumers are game t...

What young people wear now is changing, and right now, these are their favorite places ...

Here's How Many Young Consumers Plan to Watch the NFL This Season...

The NFL kicked off its season this weekend, not without some controversy—and we found o...