The Truth About How Much Millennials Are Drinking Now 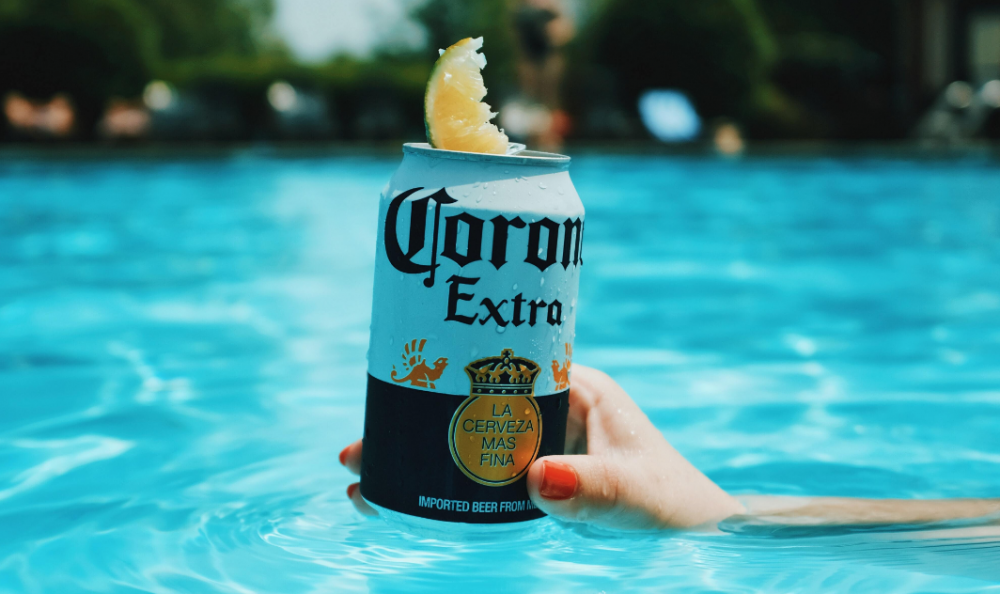 Has the pandemic made Millennials drink like there’s no tomorrow, or is the sobriety shift still relevant? Our data tells the real story…

You might think that everyone has thrown their drinking rules out the window during the pandemic. Social media has been filled with cocktail content that certainly makes it seem that everyone and their favorite chef is downing a few bottles of booze (or more) a week. White Claw slushies took over TikTok, and Ina Gartner’s enormous cosmo went viral as at-home bartending became a new pastime (at least on Instagram).

But back in 2019—not so long ago, though it might seem so—we were seeing a significantly different kind of drinking trend. Our Sobriety Shift research showed that moderation was taking hold among young consumers, who had been drinking less alcohol in comparison to previous generations and instead  turning to alternative options or choosing not to drink at all. At that time, we found that the number of 21+ Millennials who were drinking less than weekly or not at all was steadily climbing, and 30% of 21-36-year-olds said they had replaced alcohol with something else, with Marijuana and CBD the top replacement.

So did the pandemic put an end to the Sobriety Shift? We recently asked young consumers about their drinking behaviors, and compared their responses to the 2019 data to find out—and found there has certainly been an increase in regular drinking among Millennials: 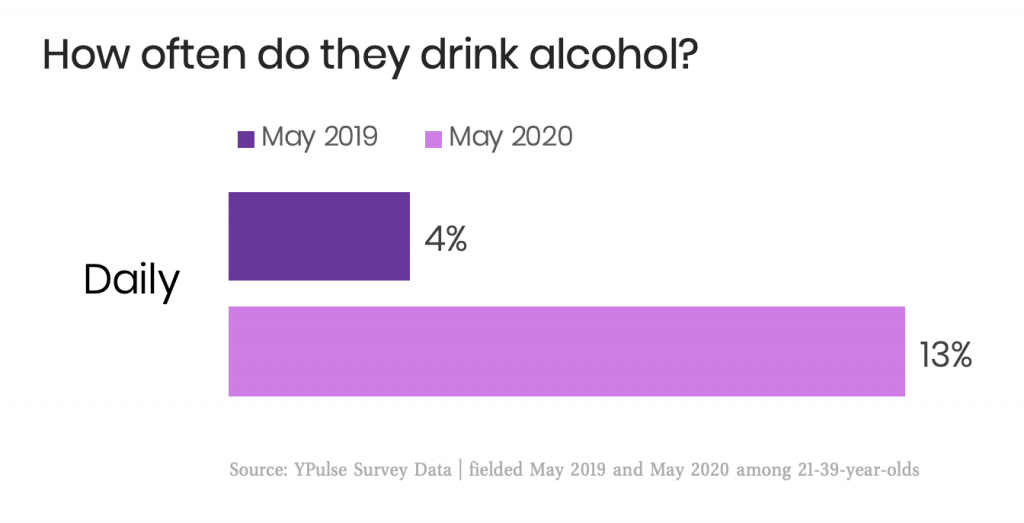 The number of 21+ Millennials who say they drink daily has tripled in the last year—and yes, the pandemic and quarantines are likely to blame. Daily cocktails have become a norm for a larger number of Millennials than ever before, and only 20% now say that they make a conscious effort to limit how much alcohol they drink (a significant decrease from the 40% who said this in 2019). Our After Corona trend research found that 24% of 21-29-year-olds say that drinking has helped them escape the stress of the crisis, and quarantines have created a new reality for all consumers where time blurs a little and some old rules and routines no longer apply. When you can’t leave your house, there’s little distinction between weekday and weekend, so drinking any day feels a little bit more normal. During quarantines, drinking regularly has arguably become easier than ever as well, as alcohol delivery serviced have boomed and restaurants have made to-go cocktails a part of their take-out offerings.

The New York Times also suggested that the Coronavirus helped to bring back the daily cocktail hour thanks to a “growing need as well for new rituals to replace the ones that had vanished from our lives.” Brands that want to appeal should think about how to make that ritual special or fun, and introduce new drink ideas to shake up routines (White Claw slushies went viral for a reason).

But there’s more to the story. At the beginning of the pandemic, 36% of 21-39-year-olds told YPulse they were drinking more often because of Coronavirus—but in May, after several months of the crisis, that number decreased to 21%. And while those who report daily drinking have increased significantly, so have the number who say they are not drinking at all:

The number of 21+ Millennials who say that they never drink alcohol has increased seven points between May 2019 and May 2020—clear evidence that the Sobriety Shift is still going strong. This is good news for brands who have been investing in their non-alcoholic products. Budweiser just announced a partnership with NBA star Dwayne Wade to debut Budweiser Zero, an alcohol-free brew that is only 50 calories and has zero sugar. With the launch of its new drink, Anheuser-Busch is hoping to tap into the “broader wellness trend” within the alcohol industry to reach athletes, or “health nuts,” who want to enjoy a beer “without impacting their mental and physical game.” Products like this clearly still have a strong market, even in the wake of pandemic drinking trends.

But what’s behind the increase in non-drinkers? At the end of 2019, we found that 56% of 21+ Millennials were going to a bar/pub weekly or monthly. With bars closed and house parties no longer allowed either, that social drinking behavior has ceased for some. At the same time it’s likely the trend that we were tracking last year has continued—any Millennials are cutting back on drinking significantly, or replacing alcohol completely with other substances. And in fact, our data shows significant increases in those who say they use CBD products and marijuana: 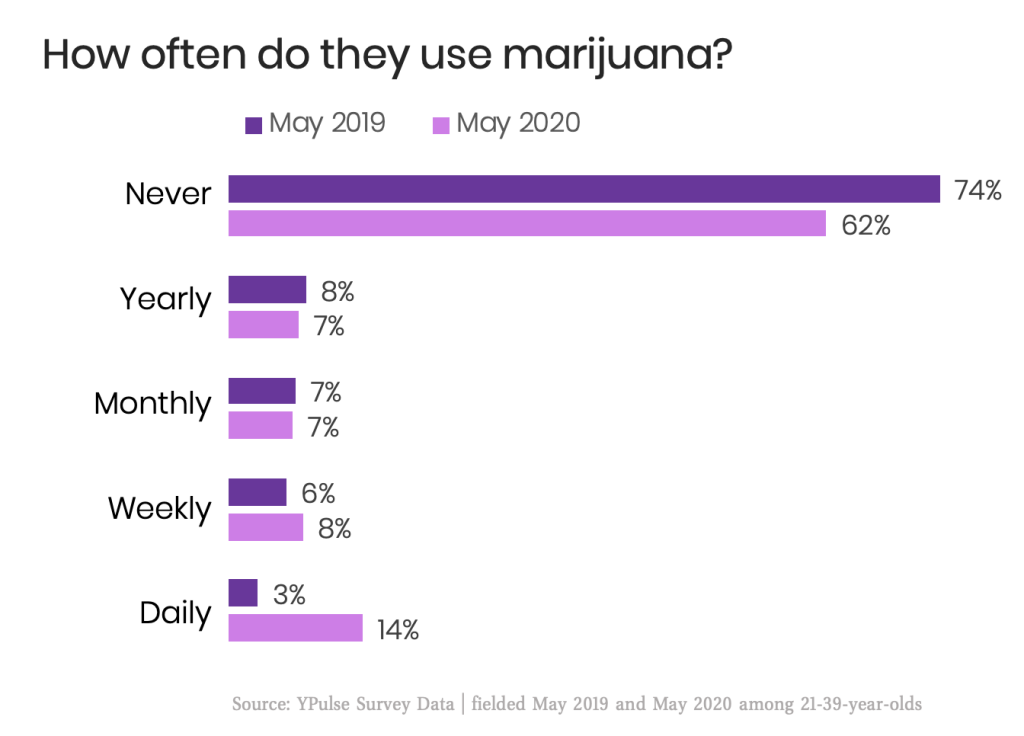 The number of 21+ Millennials who say they never use CBD products has decreased seven points since 2019, while the number who say they use them weekly has doubled. Marijuana use has seen even more of an uptick, with the number who say they never use it decreasing by 12 points, and the number who say they use it daily more than quadrupling. There is a very likely relationship between the increase in use of CBD and marijuana and the decrease in drinking. We’ve seen the cannabis product market explode in the last few years, and these substances are more available and accepted than ever before. In fact, marijuana/cannabis even made the top ranking of items that young consumers told us they couldn’t live without during quarantine. Beverage brands have been investing in cannabis products for some time as CBD drinks have become a hot market—and this data indicates they should continue those efforts to reach those Millennials who might not be reaching for alcohol any longer.