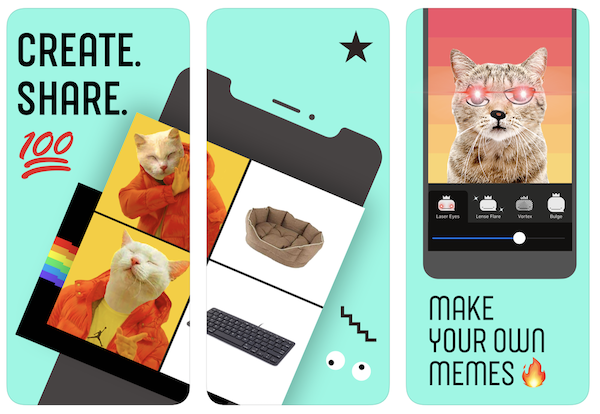 3 Apps That Could Take Off With Gen Z & Millennials

Gen Z and Millennials report looking at their phones an average of 13 times an hour—or over 150 times during waking hours—but despite the amount of time they spend on their devices, it’s actually not easy to earn a space on their screens. Sensor Tower reports that the number of apps in App Store and Google Play is currently 3.4 million—a 65% increase since 2014. The number of apps that are able to achieve 1000 downloads has been declining as the competition mounts. This year, TikTok proved that there is room for new social platforms on young consumers’ phones—if they’re entertaining and unique enough. But actually getting on their radar is more difficult than ever before. In fact, TikTok is no overnight success—the app existed in the U.S. as Musical.ly for years before its rebrand and surge in popularity.

Of course, the top social platforms are always releasing their own new apps to test concepts and copy competitors. Case in point: Instagram’s app Threads, a standalone messaging platform that launched in October and allows users to directly share photos, videos, location, and more with select followers, mimicking some of Snapchat’s best features. Apptopia reports that less than .1% of Instagram’s users downloaded Threads in its first week, so it’s not an instant-success—but it is a perfect example of how the big names in tech keep the app market crowded. In fact, that the top 1% of app publishers are reportedly responsible for 80% of downloads in the App Store.

With the sheer volume of apps vying for young consumers’ attention growing, knowing who to pay attention to can pay off.  Here are three new apps that could break through the clutter and win over Gen Z and Millennial users (and, yes, one of them is a new stand-alone from a tech giant):

Firework is a short-video sharing platform that’s growing fast, and clearly making moves to displace the competition. Like TikTok, Firework lets users create and share short 30-second videos, and serves up content in a stream of trending and suggested content. The app just launched in March, but according to Quartz already has 3 million users—mostly in the U.S—and they say they’re adding 500,000 every month. And it’s catching the eye of big players: Digiday reported last month that both Google and Weibo (China’s version of Twitter) are interested in acquiring it—not too surprising considering the buzz surrounding TikTok right now. Firework is also reportedly “ramping up” their operations in India, TikTok’s home turf, indicating they’re serious about competing.

This month, Facebook quietly launched another (yes, another) app to try to appeal to young consumers. We know, you’ve heard it before. The social media giant has a history of creating new stand-alone platforms to attempt to break into Gen Z’s world, many of which are eventually shut down (RIP Lifestage, LOL, and Direct). In fact, Facebook’s New Product Experimentation group create apps partly to test new features that could become a part of their bigger platforms. But there is a chance that this time could be different. For one, their new app Whale is all about making memes, allowing users to overlay text, effects, and more on their own images or those in the in-app library. Memes are incredibly important to young consumers. YPulse’s research shows that 55% of 13-35-year-olds send them every week. Whale is also not a copycat of an already-popular app, instead offering something that many young consumers might like but aren’t already finding somewhere else. Currently, Whale is only available in the Canadian App Store, as Facebook tests its appeal.

This social network for moms just raised $5 million to expand as a community for women starting families. Millennials are having more babies than any other generation, and digital resources are a major part of their parenting, so Peanut plays right into the generation’s behaviors. Though Peanut started as a friend-finding app for moms, they quickly found that the community aspects of the app were the most popular, and have begun to focus on those features. They’re also expanding their reach to include women who are trying to conceive, who very often want to connect with others going through the same struggles but might not be able to find those groups IRL. According to TechCrunch, the app has been growing 20% month-over-month since November of 2018—so they’re definitely one to watch.