The Most Addictive Social Platform, According to Gen Z & Millennials 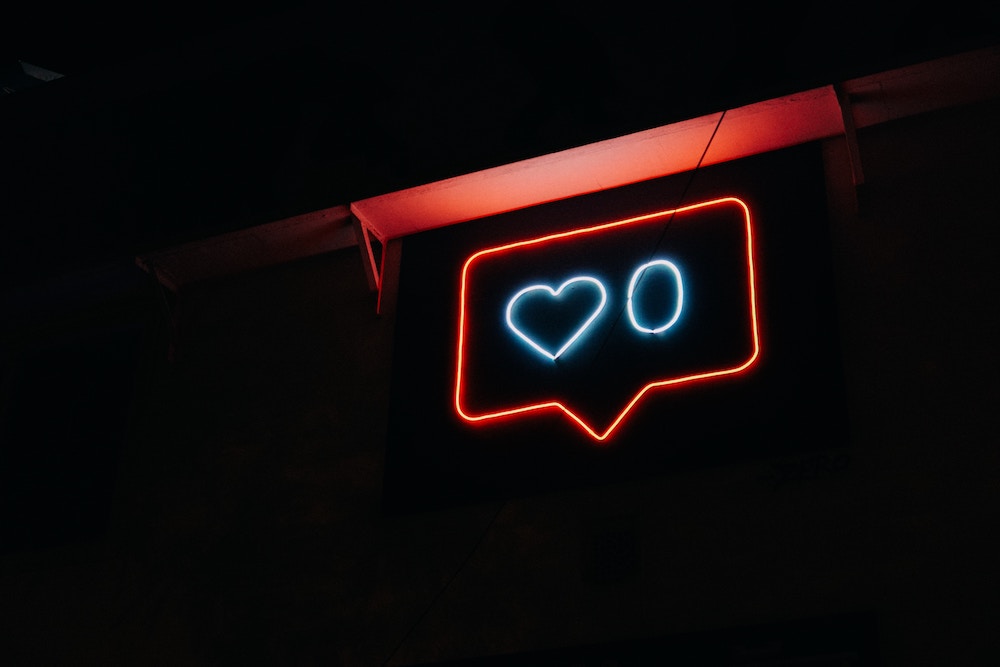 We found out what Gen Z & Millennials really think of the social platforms they use, gauging positive and negative associations like which one is the most fun, the most addictive, and more…

Last year, when predictions of Snapchat’s demise were running rampant, we looked to our survey and brand tracker data and found that all the doomsday headlines were jumping the gun. At that time, Snapchat was actually the top favorite platform amongst teens, and ranked second among 18-24-year-olds, beating out Facebook, Pinterest, and Facebook Messenger. We also found that Snapchat was the top app that teens said they couldn’t live without, meaning that the brand equity amongst this group remained high. Our analysis proved true when just last month, Snap reported a record surge in users and a 7% spike in Snapchat’s daily user base. It turns out that to understand whether young consumers are going to use a social platform, it’s best to just ask young consumers themselves.

Our most recent social media monitor survey dug even further into their feelings about the platforms they’re using most. That data shows that Facebook, Instagram, YouTube, Twitter, Snapchat, LinkedIn, Pinterest, and Reddit are the top social platforms that they’re currently using—and Facebook, Instagram, YouTube, Twitter, and Snapchat are the top platforms they’re using daily. But beyond use, we’ve delved into how they actually feel about some of these top platforms, asking 13-37-year-olds which platforms are the most fun, entertaining, mean, boring, and more. Their responses provide a map of not only where they’re spending their time online, but how they feel when they’re there. We’ll start with popularity. Which of these top platforms do they think are the most popular, and addictive?

Quite a few things have changed since we asked young consumers this question in 2016. At that time, Facebook was the top platform they saw as popular—today, Instagram has well eclipsed its parent platform on this metric. Not surprisingly, when we look at just Gen Z respondents, the view of platform popularity shifts even more: only 19% of 13-18-year-olds say that Facebook is the most popular, and Instagram and Snapchat are neck and neck for this group, at 31% and 29% respectively.

Interestingly, when we ask which platform is most addictive, the results are not necessarily aligned with which they see as most popular. Instagram is still number one on this metric, but Facebook follows close behind. But Snapchat is not perceived as an addictive platform by many, and YouTube is more likely to be perceived as addictive than it is popular.

These popular and addictive assessments are likely based on what they think activity on these platforms is like—which we explored as well. Let’s start with the positives. Which platforms do they see as the most innovative, authentic, fun, entertaining, and creative? 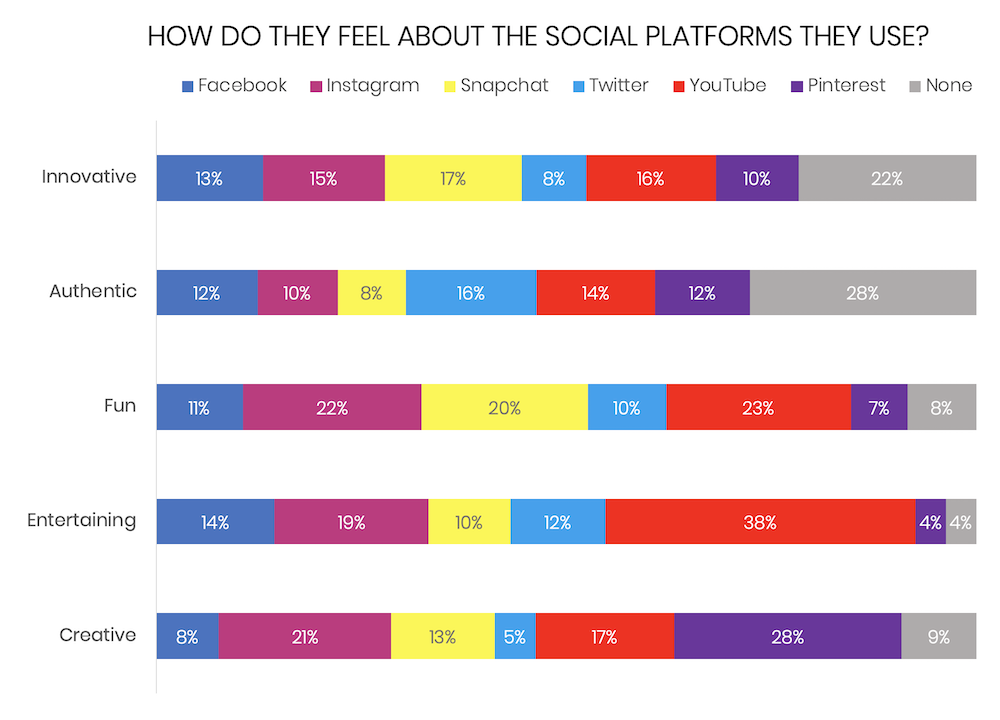 Facebook has a fun problem. Gen Z and Millennials are not likely to see the platform as fun—instead, Instagram and YouTube lead on this metric, with Snapchat not far behind. The lack of fun is likely a major reason that Facebook use among 13-18-year-olds is down to 52%, and daily use is down to 32%.

YouTube not only wins out as the platform perceived as most fun overall, but also the most entertaining. But surprisingly, considering it’s the home of so many creators, YouTube ranks 3rd on the creative metric. Instead, Pinterest wins out as the platform that’s perceived as the most creative—an important note for brands, who should know that young consumers don’t just see the site as a home for pretty pictures.

While no social platform truly wins as being perceived as most authentic, with 28% choosing instead to say that no platform is most authentic, they aren’t necessarily ready to call these platforms fake either. Let’s take a look at the negatives to explore this further: 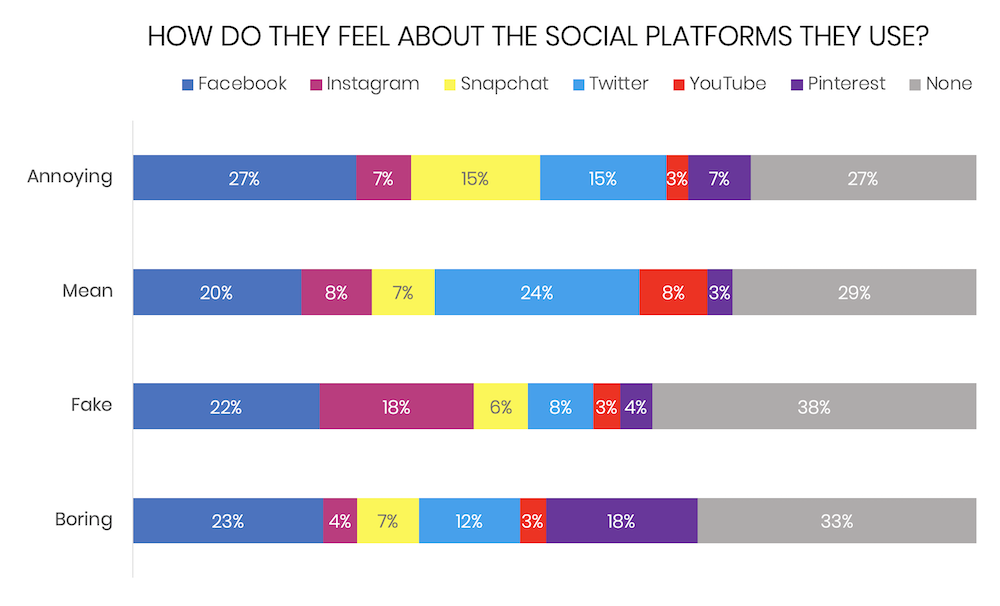 Perhaps surprisingly, 38% of young consumers choose no platform as being the most fake. While there is plenty of fake news and Facetunes on Instagram, Twitter, and Facebook, it’s important to remember that these platforms are still places that the majority feel they themselves are being real. In fact, our recent trend report Cult of Ugly found that 79% of 13-36-year-olds DISAGREE with the statement, “I have a ‘social media persona’ that is different than who I really am.” Instead, they feel they’re being themselves on social media, for the most part, and see these as spaces to express who they are.

Unfortunately, Facebook seems to have the most negative perceptions surrounding it. It’s the platform most likely to be perceived as annoying, fake, and boring (which goes hand-in-hand with that fun problem we mentioned earlier). But the title for most mean goes to Twitter. The home of call out culture and certain outspoken public figures didn’t rank highly on any positive metrics either, indicating that though half of young consumers are using the platform, they don’t necessarily feel good while doing so—which could lead to issues for the site in the future.