The App Gen Z Says They Can’t Live Without

What are the apps the mobile-addicted generations can’t live without? We found out, and Gen Z can live without some of the social media that Millennials still rely on…

Despite a growing movement to limit smartphone addiction, there is no doubt that Gen Z and Millennials are chained to their phones. According to Ypulse research, 85% of 13-17-year-olds and 99% of 18-36-year-olds have a smartphone—and they’re looking at their phones over a hundred times a day. And they know they’re hooked. Three in five say they’re addicted to their phones, and 86% say they always have their phone within reach. From our mobile behavior research, we know that apps dominate young consumers’ attention on their phones. Their time is split between social media apps and other apps, with just 6% of their time on mobile spent on mobile sites accessed through their browsers. Half of 13-36-year-olds tell us they have between 11 and 30 apps downloaded on their phones, and 30% say they have more than 30.

As always, the competition to capture their attention on phones is cutthroat. From HQ Trivia to the Fortnite, there always seems to be a new power player sucking up their mobile time. But while phone fads may come and go, these mobile-addicted generation see some apps as necessary to their everyday existence. In our survey on mobile behavior and app use, we asked 1000 13-36-year-olds, “What is the one app you couldn’t live without?” Here’s what we heard from Gen Z and Millennials (spoiler, they aren’t the same)…

*This was an open-end response question to allow us to capture the full range of apps that Millennials and Gen Z say they can’t live without—without our preconceived ideas shaping their responses. As with any qualitative question, the responses include those that are top of mind and those that are most popular. The lists are ordered according to number of responses received, and alphabetically when ties occurred. 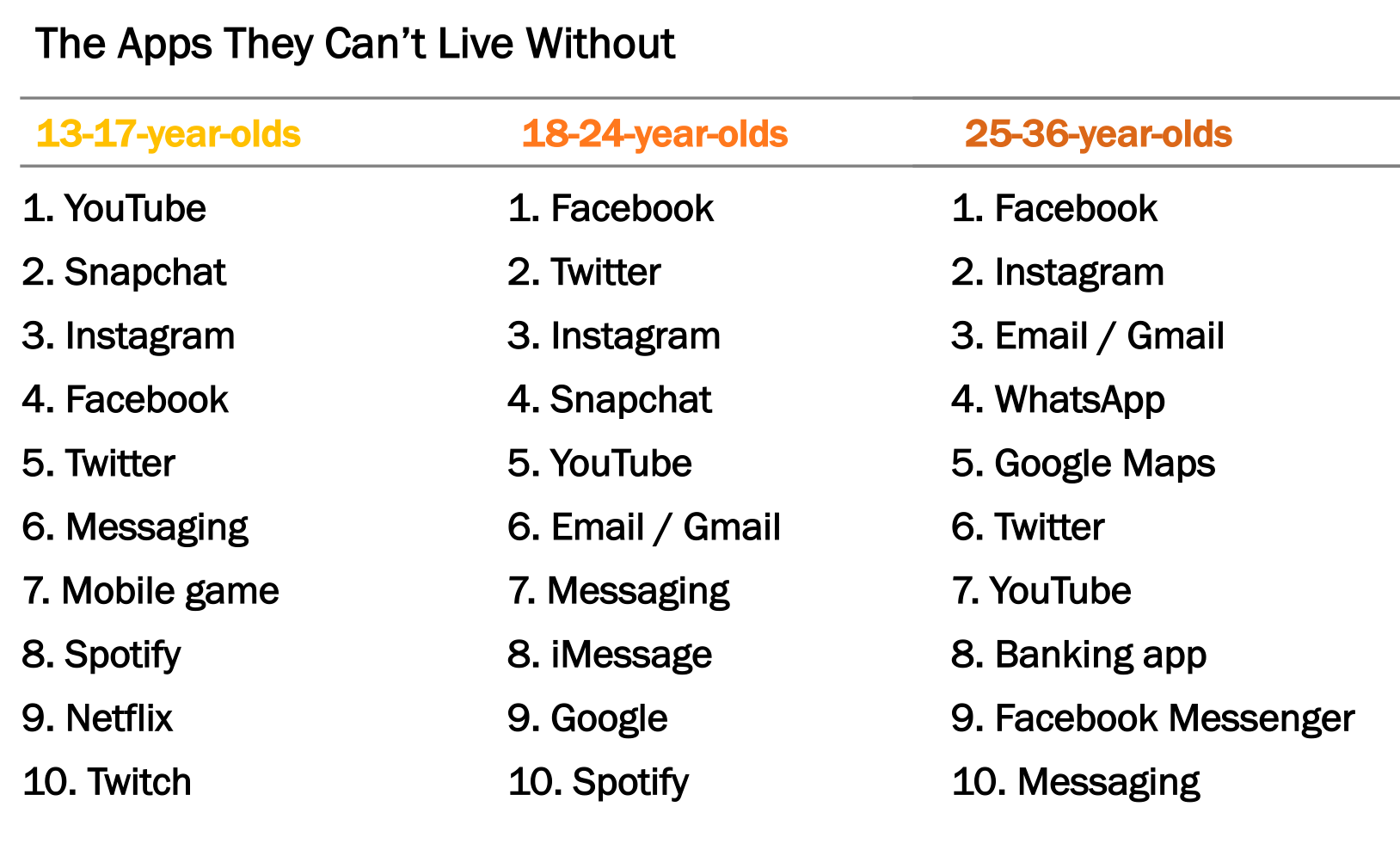 One major difference sticks out when looking at the comparison between young age groups—Gen Z teens name YouTube as the top app they can’t live without, which 18-24-year-olds and 25-36-year-olds are most likely to name Facebook.

When we looked at the ways that today’s teens are different from Millennials, we noted that less than half of teens (49%) are currently using Facebook, compared to 84% of 18-35-year-olds. The discrepancy is even more significant when we look at daily social media use, with just 32% of 13-17-year-olds saying they use Facebook daily, compared to 69% of 18-35-year-olds. Instagram is the top social network that teens report using, followed by Snapchat, which they are more likely to use than 18-35-year-olds. We clearly see these differences reflected in the lists of apps they can’t live without.

As young consumers age up, social media remain their “must have” apps, but other, more functional apps creep into the lists. The oldest group here, 25-36-year-olds were more likely to name banking apps and Google Maps, and less likely to name entertainment apps like Netflix and Spotify—which both made the younger groups’ lists. The shift showcases the different ways they’re using their devices, which are mainly entertainment for Gen Z, but are essential to organization and day-to-day functionality for Millennials.

This App Wants to Tackle Gen Z & Millennials’ Anxiety & Burnout
This newly launched app is offering affordable options to help with young people’s ment...
3 Things Brands Should Have Learned About Social Media This Year
A lot happened on social media during this historic year—and these are three lessons al...
5 Marketing Trends Born In 2020
These marketing trends that were born out of necessity this year, but brands should def...