Social Ranking: How Millennials & Teens Really Feel About The Platforms They Use

Our most clicked article of 2015 was Millennials & Teens Sound Off: Their Top 10 Favorite Apps. It makes sense—brands are now understanding that if they want to reach young consumers, they need to tailor marketing for the media and entertainment they’re spending the most time consuming, and knowing which they love the most is a huge advantage. In that article, we reported that Instagram was at the top of their top ten favorite app list, beating out Facebook, Snapchat, Twitter, Tumblr, YouTube, and more.

But they’re using multiple platforms for multiple purposes, so in one of our most recent surveys of young consumers, we took our exploration of their social media preferences to a new level. Which social platform do Millennials and teens think is the most fun? The most boring? The most addictive? We got 1000 13-33-year-olds to sound off on the social media that they use, and got the real scoop on how they rank the apps and sites they’re hooked on.

We had young consumers look at a list of positive and negative descriptors, and asked them to choose the social media app that they felt is best described by each. The result is a snapshot of their range of feelings on these platforms. Here’s an overall look at which apps were most likely to be chosen for each descriptor, for 13-33-year-olds overall:

Facebook’s ubiquitousness for young consumers is clear here. They see the site as the most popular, addictive, authentic, boring, and annoying all at once. FB’s wide range of functions are a factor: because so many things are done on the platform (photos, status, news sharing, etc.) it can play more than one role in users’ lives, and evoke many different feelings.

Arguably, YouTube performed the best in the positive attribute list, ranking the highest for the most descriptors, and not coming in the top three position for any of the negative list. Interestingly, Twitter has a bit of the opposite problem, coming up as the second most annoying and most mean platform overall, and not ranking in the top three for any of the positive attributes. In our social media use tracker, we have seen Twitter use plateau amongst young consumers, while visually-driven Instagram (which ranked as one of the most popular, addictive, and creative) has seen use steadily climb.

Of course, we’ve talked before about the difference between older Millennial and teen social media users, and a look at the rankings according to age presents some interesting differences. Here is a comparison of the top picked app for each descriptor among 13-17-year-olds and 18-33-year-olds: 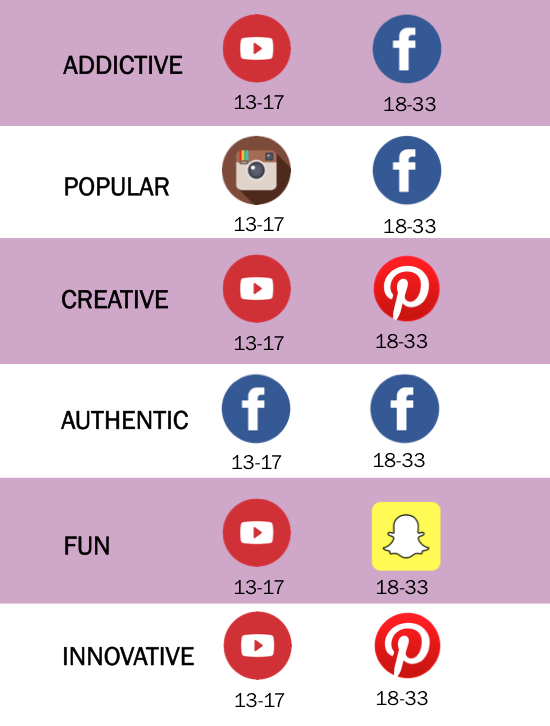 For 13-17-year-olds, Facebook ranked as the most authentic platform, but did not rise to the top for any other positive descriptors. This indicates a weakness in Facebook’s perception among its youngest users: it’s not standing out from the crowd. These are consumers who are more accustomed to specialized social media, apps and sites that have taken just one Facebook’s many features and made it a focus. The competition is possibly drowning out the originator. For teens, YouTube is clearly the most highly regarded site, coming up as the most addictive, creative, fun, and innovative.

Facebook’s difficulties with young users is also clear when we look at the age comparison for the negative descriptors: 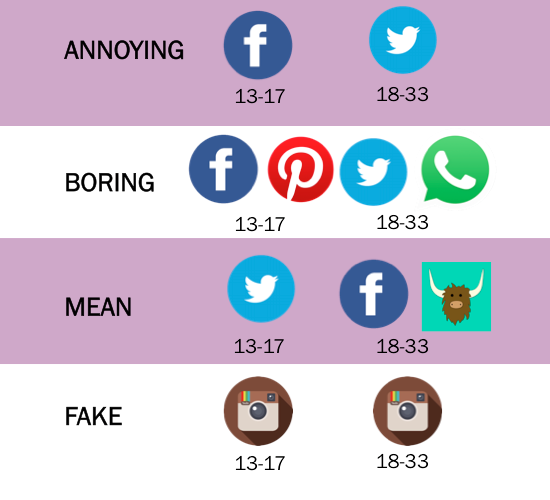 Here, Facebook is the most annoying and ties as most boring for teens. While Twitter takes those dubious honors among 18-33-year-olds.

Those who read our first paragraph might be wondering why Instagram, which ranked as Millennials and teens’ favorite app, is also the one they see as the most fake. We explored this dichotomy in our most recent Ypulse Quarterly: while young consumers have perfected the art of looking perfect on social, and the platforms have become an intregal part of their lives, there is an awareness of the dangers of social media illusion. In addition, while they believe they personally are conveying their true selves on social media, they percieve others’ posts as less authentic.