We’ve been looking back at 2015, and today we’re sharing the article that recieved the most clicks of the year…

They’re on their phones all the time, so which apps are getting the most love from young consumers right now? We asked, and found out their top 10 favorites.

According to our most recent monthly survey, 89% of 13-33-year-olds own a smartphone. When we ask them to tell us which device they own is the one they can’t live without, 55% say smartphone—a number that is even higher for 21-29-year-olds. It is well known that young consumers are hooked on their devices. They told us they look at their phones an average 13 times per hour, and 65% consider their phone their lifeline to the world. The Mary Meeker Internet trend report found that 87% of 18-34-year-olds say their smartphone “never leaves [their] side, night or day.” They also think phones are the key to the future: three in five believe everything will be done on mobile devices in the next five years.

So now we’ve established the majority are spending a LOT of time on their smartphones, and will continue to do so, what are they spending that time looking at? We asked 13-33-year-olds to tell us what their favorite app is, and why, and we’ve narrowed their responses down to a top ten list.

This was an open-end response question so that we could capture the full range of apps they love using. As with any qualitative question, it’s important to keep in mind that the responses will include those that are top of mind, those that are used most often, and those that are actually viewed in a positive light. But their top 10 app list can still tell us a lot. Here are the ones they love the most: 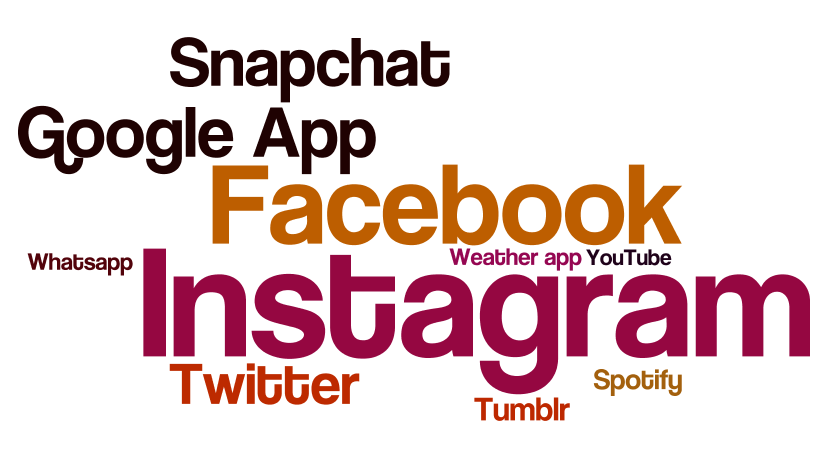 Facebook can pat itself on the back, because their purchase of Instagram has earned them a lot of young consumer’s eyes. Instagram was at the top of their top ten list, and according to our respondents, they love the app most for its ability to connect them with others, and give them a window into others’ lives. One 28-year-old female said, “I’m obsessed. I love seeing other people’s lives,” while a 21-year-old female told us, “I’m able to connect with so many different people with common interests. I can get recipes, look at animal pictures, see what other vegans do with their time, etc.” They of course also love that the app is photo-based (they are an visual communication generation after all). A 26-year-old male said, “I like taking pictures and this app has gotten me into the habit of taking pictures more often.”

Despite hand-wringing about young consumers leaving the platform, Facebook is their second favorite. Not surprisingly connecting with friends and family was the most-mentioned reason they like the app. We should note that some did compare the two platforms when telling us why they love Instagram, often saying the streamlined content was a big draw. The theme of connection, community, and access runs throughout their top ten, which is filled with social and chat platforms. Their group mentality and desire to stay digitally close to their loved ones is clear here, and the list sheds some light on why 43% say that their social life depends on their phone.

Google apps were the only non-social media apps in their top five. Respondents mentioned everything from Gmail to Google Maps to Google Drive as favorites, and their love for Google apps is a likely reason the tech giant also made their list of favorite brands.

While their top ten favorite apps had plenty of mentions, the overall list was also filled with other names. After all, there are a LOT of apps out there. To capture the rest of the favorites mentioned, we netted them into categories to see the kinds of apps they like the most:

Here we see the true hold that social apps have over them: social apps were the top category mentioned, and were mentioned almost three times more than the second place category. Chat and messaging apps came in as their fourth favorite category, and we know the number one thing that Millennials and teens are doing on their smartphones every day is messaging, a behavior that is driving the popularity of messaging apps like Whatsapp and Kik. It is interesting to note though that they prefer social apps overall.

Also interestingly, while a Forbes survey found that half of all Millennials have downloaded a mobile shopping app on their phones, very few mentioned a shopping app as their favorite and the category didn’t make the top ten. (This could be an opportunity for retailers to step up their mobile game.)

Western Europe
4 Brands Tapping TikTok to Reach Young Europeans
Having a TikTok marketing strategy is a must for brands trying to reach young Europ...
North America
You Got #Krissed is One of the Top Trending Hashtags This Month
According to Gen Z, trends start on TikTok first before spreading to other platform...
Western Europe
Young Europeans Say These Are Their 15 Favorite American Brands
American culture has infiltrated young Europeans’ lives—and that includes American ...