15 of the Coolest Brands, According To Gen Z & Millennials

Young consumers are quick to call out brands that are trying too hard to be cool—but what brands do they actually consider worthy of the title? We checked our brand tracker to find out…

According to YPulse’s research, 88% of young consumers think that brands try too hard to be cool. “Cool” can be a tricky thing to chase, and when attempts to be cool come off as inauthentic, Gen Z and Millennials are quick to call it out. Just look at the the Twitter account @BrandsSayingBae, which chronicles all the times a “corporation tweets like a teenager,” for the entertainment of 41.8K followers. Or the subreddit r/FellowKids, a community where over 585K members post “Advertisements and media that totally appeal to the radical youth!”—aka a place to immortalize brands’ most cringeworthy attempts to connect with Gen Z and Millennials. (And celebrate the ones that are actually funny.) The most common offenses are jumping onto memes, and trying to use slang—which often comes off as just coopting culture, rather than contributing to it.

Trying to be cool often falls flat—so what brands are actually succeeding to be viewed as cool in the eyes of young shoppers right now? We checked in on the YPulse youth brand tracker to find out. The continuous tracker monitors young consumers’ perceptions of over 400 brands, measuring a variety of dimensions, including which brands then think are cool. Here are some of the top brands that Gen Z and Millennials don’t think are trying too hard, and actually see as cool right now: 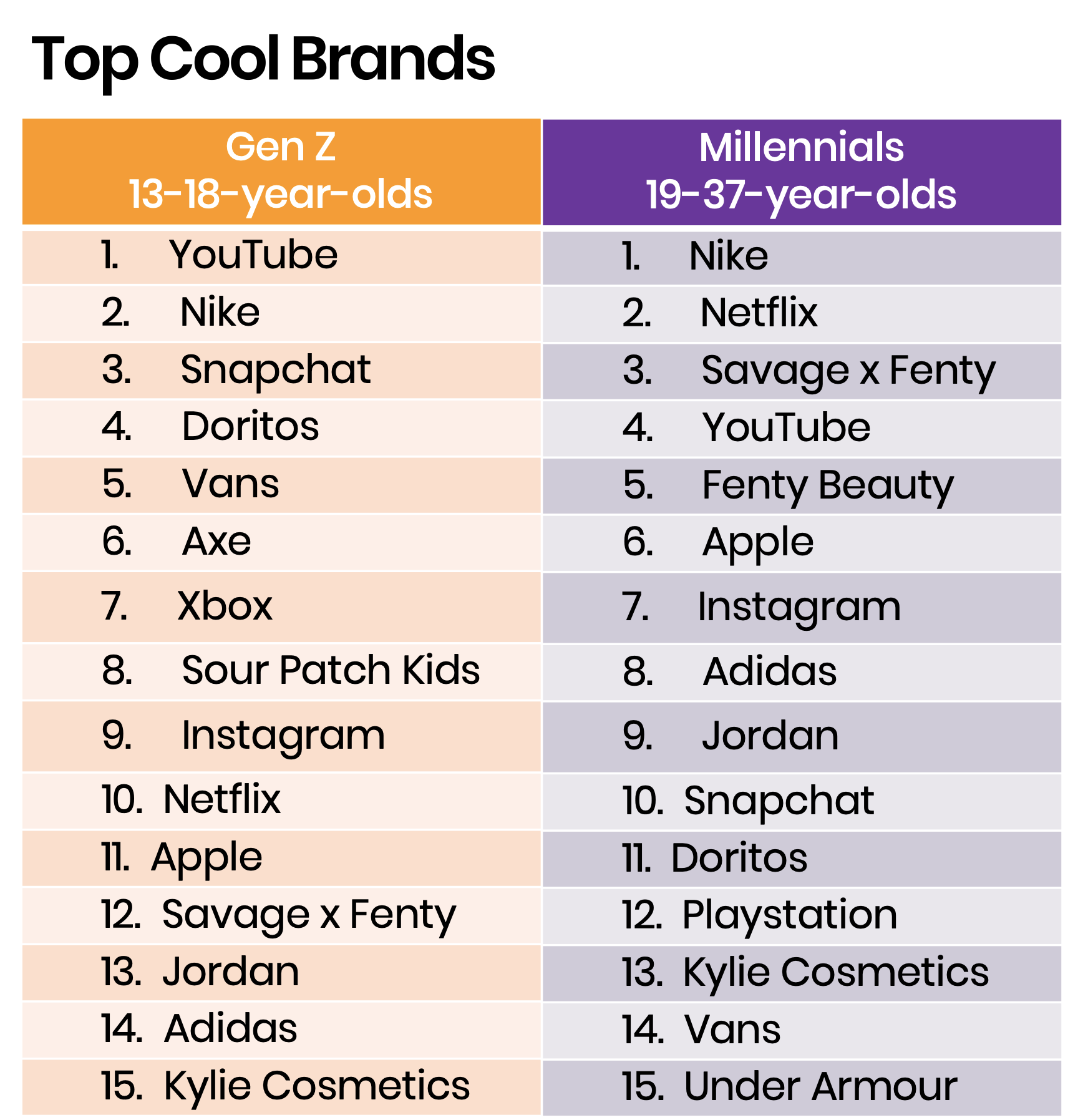 The YPulse Brand Tracker measures young consumers’ relationships with a brand based on a weighted six-point scale, ranging from “Never heard of this brand” to “This brand is one of my favorites.” As part of the “Brand Personality” metric, we also ask respondents “Which of the following are COOL?” These are the top brands that were rated as those they say are “cool,” among those who are aware of the brand. The brands on this list are among the over 400 brands included in the brand tracker as of 7/17/19. Rankings are subject to change as more brands are added and removed.

Content rules for young consumers. YouTube tops the list for Gen Z and Netflix is second only to Nike (their perpetual favorite) on Millennials’. The two media brands beat out many fashion, CPG, and tech brands—signifying how much value these generations place on entertainment. Our media consumption monitor shows that each generation choose the media source they use the most as the media brand they think is coolest: YouTube is the service 13-18-year-olds are most likely to watch video content on weekly, and Netflix is the service 19-37-year-olds turn to most. Another potential takeaway here: It’s not how hard a brand tries to participate in youth culture, it’s the amount of culture they actually create themselves that actually resonates.

*EDITOR’S NOTE: A previous version of this article mistakenly left Nike out of the rankings for both groups. Nike ranked #2 on Gen Z’s cool brands list, and #1 on Millennials’ on 7/17/19.

North America
Gen Z and Brands Special Report
Gen Z is continuing to age into their financial power and any brand that wants to last ...
Western Europe
Young Europeans Say These Are Their 15 Favorite American Brands
American culture has infiltrated young Europeans’ lives—and that includes American ...
North America
Did the Crypto Crash Scare Off Gen Z & Millennials?
Did the crypto crash change how Gen Z & Millennials feel about digital investin...