These 5 Stats Show Why Millennials Are Changing The Alcohol Industry 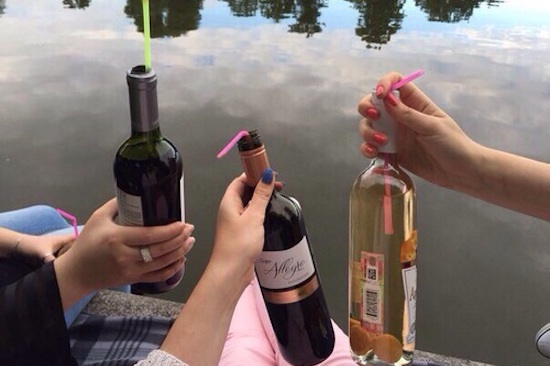 From where they’re drinking to what they drink out of, young drinkers are upending industry traditions with their preferences—and these five stats show why…

From burgeoning moderation trends to the kinds of drinks that they prefer, we continue to see the next generation drinkers shake up the alcohol industry. Wine and beer are the top two alcohols that 21-36-year-olds like to drink, according to our most recent survey on nightlife and drinking—but how, when, and what kinds of beer and wine they’re drinking are forcing the industry to change and adjust to their preferences. Millennials spend more on craft beer than any other generation according to C+R Research, who report that over half of the young demo say that they have at least one craft beer every week. But chasing a new label has become a sport among young drinkers, creating a race to release new beers in the industry. Magic Hat’s President tells YPulse that it’s “all about new experiences and new flavors,” for younger consumers—prompting the brand to create a new beer/wine hybrid line. (Craft beer and red wine come are at the top of the list of their go-to drinks on a typical night of drinking according to YPulse data, so mixing those two could be appealing.)

With new lines of beverages being invented for them, it’s no surprise there is more competition than ever for their beverage dollars. According to Bloomberg, the youngest generation of drinkers are spiking sales of spirits like mezcal, sparkling wine, and hard seltzer—all helping to slow sales of big beer brands. The wine industry is also reporting slowing sales, and blaming young consumers, with the CEO of Wine Intelligence telling The Drinks Business, “We need to realize we are in a pitched battle for the hearts and minds of the next generation…When they do choose alcohol, they now have diverse and interesting offers in spirits, beer and cider.” But it’s not just the kinds of alcohol that Millennials prefer disrupting the industry, it’s also what traditions they’re willing to break with, and how they choose the brands they do buy. We looked into our nightlife and food trend surveys and found five stats that show why Millennials 21-36-years-old are changing the industry: 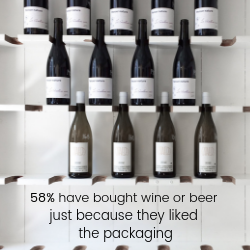 1. Almost six in ten have bought wine or beer just because they liked the packaging

This generation of drinkers isn’t about beverage loyalty; they’re shopping for a good label. Over half (58%) of 21-36-year-olds have bought a wine or beer just because they liked the packaging. In the age of Instagrammability, it’s not too surprising. After all, 52% say that it’s important that product packaging look good in the pictures they post on social media (with 29% saying it’s extremely important). Examples of wine bottles being bought on appearance alone aren’t uncommon. The Wonderful Company, known for brands like Fiji Water and Pistachios, brought new wine brand JNSQ to market this year—and began outselling their other labels in record time thanks to glass containers designed to look like retro perfume bottles, according to Adweek. It’s no wonder that for wine and beer makers, label artwork has become massively important, and the design of cans and bottles as vital (if not arguably more so) as what’s inside. 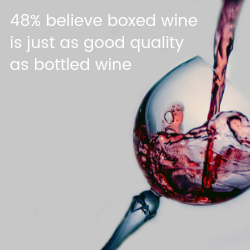 2. Half believe boxed wine is just as good quality as bottled wine

Remember those traditions we said they were rethinking? Buying wine in a bottle is certainly one of them. While premium wine sales (anything over $10 a bottle) are slowing, Millennials are more open than ever to more affordable options. Almost half (48%) of 21-36-year-olds believe that boxed wine is just as good quality as bottled wine. The industry has responded to their interest, with boxed wine evolving quickly to provide more stylish options. While Gen Z grew up thinking boxed wine meant only hangover-making cheap vino, Millennials are buying up higher quality boxed labels that sell them on affordability, and eco-friendliness. How much has the stigma against boxed wine died down? Twenty percent of young drinkers tell us they would RATHER buy boxed wine than bottled wine if they had to choose between the two. 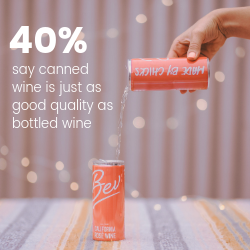 It’s not just boxed wine that’s winning over the next generation: they’re happy to drink their wine out of cans, too. Forty percent of 21-36-year-olds tell us that canned wine is just as good quality as bottled wine. According to Wine Spectator, even though the category still only accounts for less than 1% of the Millennial-favorite alcoholic beverages’ market, Nielsen reports it spiked 69% last year and continues to gain ground. Mintel reports the industry has come out with more canned wine options based on young drinkers’ interest, with sales of canned wine jumping 125% from 2015 to 2016. An exec at Delicato Family Wines explains, “Millennials have grown up in a world where consuming wine outdoors—or any location outside of the traditional table—is more acceptable than generations past.” 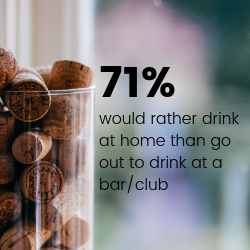 4. The majority would rather drink at home than go out to drink at a bar/club

As we’ve reported before, Millennials would rather stay in than go out—impacting a variety of industries. Seven in ten 21-36-year-olds tell us they would rather drink at home than go out to drink at a bar or club—potentially impacting the alcohol they’re reaching for on a typical night of socializing. It’s possible that since they’re staying home to drink, they’re more interested in packaged spirits that give them the feeling of a mixed drink without the work—like the malt beverages and spiked seltzers that have grown in popularity as they’ve aged up. It’s also potentially changing the way they shop—and increasing their desire to have alcohol brought straight to their doorsteps… 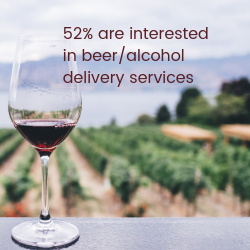 5. Half of young drinkers are interested in beer/alcohol delivery services

Millennials are all about convenience and saving time, so delivery services are major draws, and half (52%) of 21-36-year-olds tell us they’re interested in beer/alcohol delivery services. There’s already evidence that meeting them where they shop pays off: According to Business Insider, when the generation drank 42% of all the wine consumed in 2015 in the U.S., alcoholic beverage companies shifted their focus online—prompting sales to spike 33% in 2017. Not only are they interested in alcohol delivery, they might want to make it a regularly scheduled delivery: 43% are interested in joining a monthly beer or wine club.