What companies do Gen Z and Millennials want to work for? Their top answers reveal some interesting differences between these generations…

As Gen Z grows up, their differences from previous generations are becoming more clear—and we’re beginning to see that what they want for the future doesn’t look exactly like Millennials. Though when we ask young consumers what industries they would ideally want to have a career in, artist/creative is at the top of the list for both 13-17-year-olds and 18-36-year-olds. But medicine/healthcare/mental health and engineering are in the number two and three spots for Gen Z, while engineering, education, and self-employed tie for the number two spot among Millennials. Interestingly, Gen Z is currently less likely than Millennials to say that their ideal career would be self-employment.

But beyond what industries and career tracks they dream of taking, we also wanted to know about any differences in their dream employers. Once again, in our most recent employment and careers survey, we asked young consumers, “If you could work for any company in the world, what company would you most like to work for?”* Gen Z and Millennials’ top dream employers have some commonalities—the same two companies take up the top two spots on both lists, and their top 10 rankings have a good amount of overlap. But we also see some differences between the generations that speak directly to their interests, and the culture they’ve grown up in respectively. Here are their top 10 dream employers right now:

*These were open-end response questions to allow us to capture the full range of companies that Gen Z and Millennials are interested in working for—without our preconceived ideas shaping their responses. As with any qualitative question, the responses include those that are top of mind and those that are most popular. The lists are ordered according to number of responses received, and alphabetically when ties occurred. 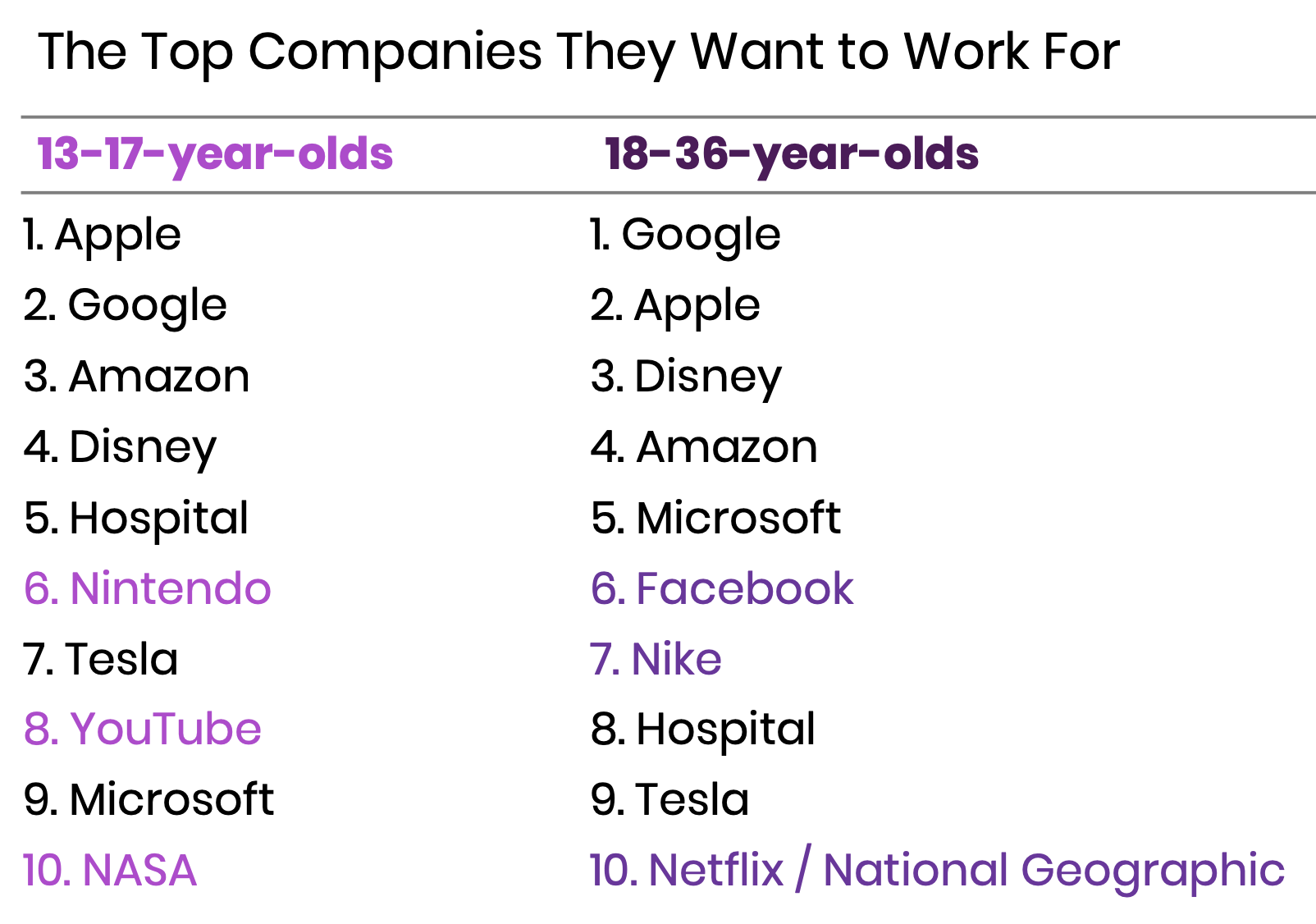 Once again, tech dominates the list of companies that Gen Z wants to work for—and it does for Millennials as well. Google and Apple are at the top of the list for both groups, and Amazon, Microsoft, and Tesla are on both lists. (As is Disney, which has captured the hearts of both generations.) But while tech is a theme for both, there’s a noticeable difference in what tech companies they want to work for. Facebook appears in the top ten list for 18-36-year-olds, but doesn’t show up for 13-17-year-olds. Netflix is also in the top ten list for those cable-cutting Millennials but doesn’t quite make Gen Z’s top ranking—instead, YouTube is in the number eight spot for the younger group.

As we recently wrote, YouTube is Gen Z’s cable, and they’re growing up consuming massive amounts of content on it. Gen Z is more likely to watch video content on YouTube weekly than any other platform, and according to our most recent media consumption survey, 69% of 13-17-year-olds watch video content on YouTube weekly, compared to 21% who watch cable weekly. The impact of this massive shift is enormous when it comes to ad consumption and content preferences—but it’s also impacting the way they see success. To them, YouTube is a center of entertainment, but it’s also a viable career path to be a YouTube creator. While a few of the teens who said they want to work at YouTube referenced working for the company, several were talking about making a living off of having their own content on the site. One 16-year-old male told us he would want to work on YouTube because “[he] love[s] entertaining people.”

But don’t be fooled—they do not all want to be YouTube stars. On the whole, Gen Z’s career ambitions are driven by much more practical reasoning. A 13-year-old male who said he would want to work at Amazon explained, “Great sales, great profits, good benefits, I could make a good living, purchase a house, save for the future,” while a 15-year-old female said, “Amazon seems like a stable company.” Stability, and making enough money to own a home and stay out of debt are the kinds of things that this generation is already considering when it comes to their career paths. Working for big name companies appeals to many because they hope the bigger the company, the less chance there is of losing their job. Clearly, they’ve been shaped by the recession that many of them were born into—and we expect that many employers will need to present themselves as secure and safe in order to attract this next generation of talent.