What’s the next big thing in the land of neon signs and rainbow bagels? We found 6 trends that are filling young diners’ social media feeds…

Young diners are lining up around the block for restaurants serving up can’t-miss Instagram opportunities—even when the actual food is sub-par. Many restaurateurs aren’t just tolerating the social media-obsessed, they’re intentionally turning their places into “Instagram bait” to earn some free press, according to The Verge. And the trend doesn’t stop with milkshakes made for pics and cutesy design touches. In fact, some might be taking it a little too far. London’s Dirty Bones provides “Instagram packs” at customer request, which Grub Street reports consist of “a portable LED light, multi-device charger, clip-on wide-angle lens, tripod, and a selfie stick.” (We can hear the Xers and Boomers cringing as we write.)

While brands need not go that far, Instagrammability continues to be a trend that should be top of mind, considering its undeniable impact on the food world and young consumers’ purchasing patterns. Consider this: YPulse found that 58% of Gen Z & Millennial social media users say that it’s at least somewhat important that the restaurants they visit look good in pics they post to social media, with 28% saying it’s “very” or “extremely” important. They feel almost equally as strong that the food they buy to be picture-perfect.

More often than not, the most Instagrammable food trends start with smaller brands, bloggers, and restaurants before being adopted by big names. Rainbow foods, and then unicorn toast, and noodles, and lattes, etc. were trending online for some time before Starbucks’ Unicorn Frappuccinos took over the internet. So, what will be the next neon sign or unicorn food of the restaurant world? Here are 6 new-to-the scene Instagrammable trends from design to ingredients that are percolating in the food world, and all brands could be inspired by:

Instagrammable tables are the next frontier for foodies, according to Eater. San Francisco champagne bar The Riddler’s table have “Hello, old friend” baked into the enamel, and the owner admits they were designed with social media in mind. He observed, “When you look at our geotags, 80 percent of the shots are shot from above.” Ardamez, the company that designed the table, has seen a rise in demand for custom, baked enamel tables like The Riddler’s in the past two years, offering tables that include emojis and other distinctive designs. And the trend doesn’t stop at table tops. The Verge reports that young consumers taking pictures from above are also fueling the rise of distinctive tile patterns, like Liholiho Yacht Club’s that contain a hidden message saying “Aloha.” Their flooring has become their Instagram trademark—a way of the customer confirming that they literally set foot in the restaurant. Both trends are inspired by the fact that food and travel bloggers often take their photos from above, putting these flat surfaces in the spotlight in a totally new way. 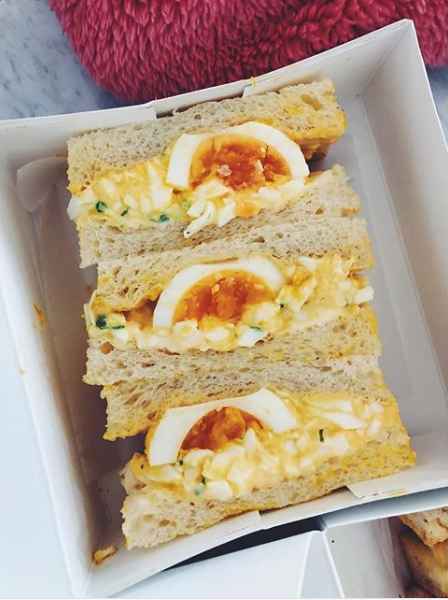 An unlikely menu item took over Instagram recently: an egg salad sandwich. But this is nothing like the gas station fare the name conjures up. Grub Street reports that LA restaurant Konbi’s upscale version of the convenience store favorite features crème fraiche, rice wine vinegar, scallions, and specially-baked milk bread. But what makes it a social media star are the locally-farmed eggs, which are placed “butt to butt” to show off their bright orange yolks. The sandwich is also made to fit perfectly in their takeout package, teaching another lesson in how to create Instagrammable items. Not only does the simple sandwich going viral show that anything can be turned into a social media star with the right aesthetic touches but that packaging is more important than ever for brands looking to break through the clutter. 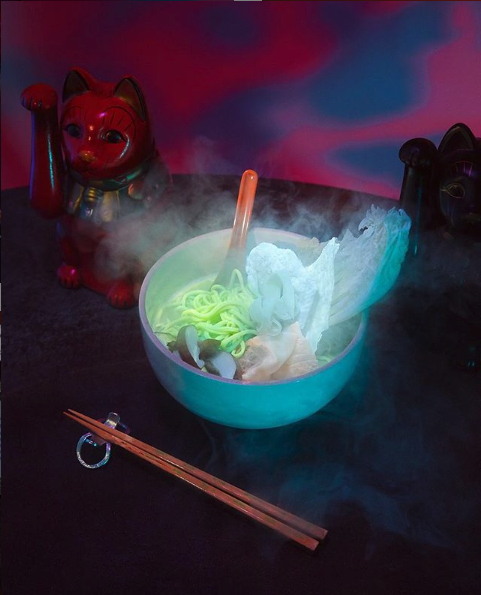 A glow-in-the-dark ramen pop-up is winning with young consumers looking to up their Insta-game with some edgy content, according to The Drum. The restaurant Nakamura.ke has become a must-photograph eating experience for artsy Instagrammers who want to slurp up their coveted “lumen-ramen.” The glow-in-the-dark food is the reason diners go the restaurant, but Nakamura.ke isn’t letting them down once they get in the door. MediaPost reports they’re adding augmented reality by teaming up with Huge. For instance, looking at the menu brings up 3-D renderings of different dishes, while three 50-inch “Living Portraits” let guests interact with portraits of the wait staff. The experience debuted in Atlanta and is set to tour Los Angeles and Sydney next. 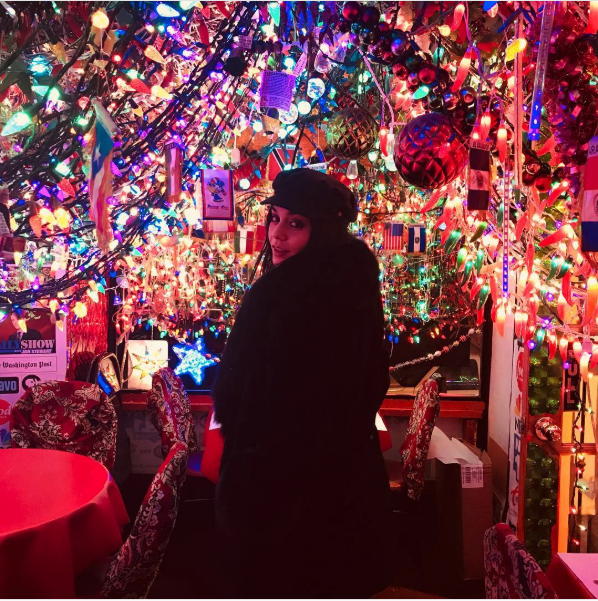 4. Going Over the Top

When looking to up the Instagrammability factor, there’s no such thing as “too much.” Panna II Garden proves just that. Thrillist reports that despite bad reviews, the New York City Indian restaurant is packed because of its Instagrammability. Panna II Garden serves up Indian food amongst a staggering number of chili pepper hanging lights—with everyone from Vanessa Hudgens to Emily Ratajkowski using the bright décor as an Instagram backdrop. Now, the hashtag #pannaii has over 2,000 posts (few of which feature food) and wait times on weekends are over an hour long. One 27-year-old sums it up: “I don’t care about the food. I’m in it for the lights and the drinks and that’s it.” Meanwhile, “Kitschy Christmas bars” won over Millennials by “drench[ing] their space with Christmas décor,” according to Eater. The moral of the story? No need to be subtle about going after young diner’s ‘grams. 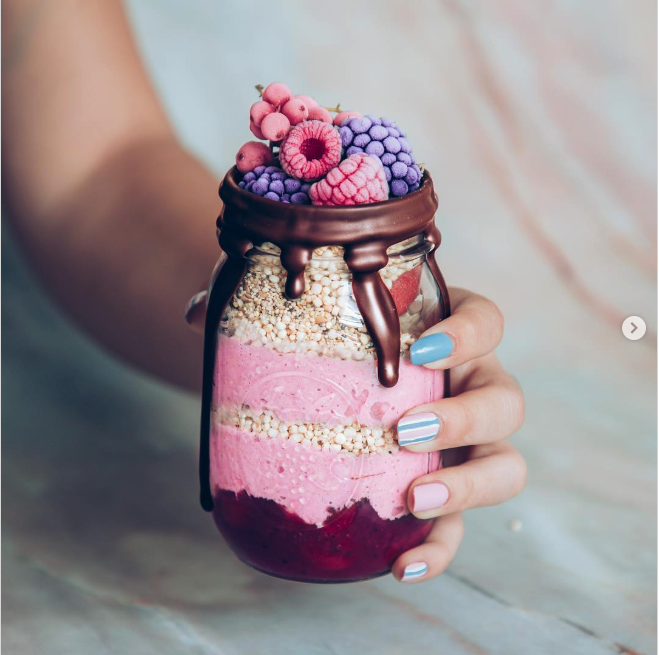 “Ghost berries” are the latest photo-friendly food to take over Instagram. The semi-frozen fruits with an icy appearance are used to adorn smoothies, ice cream, and other Instagram-favorite treats. The brightly-colored dishes often feature toppings that are even less edible than frozen berries, like pine needles—but they still rack up likes. “Maybe it’s an example of the kind of dissociation that can occur on a platform like Instagram,” one expert tells Vox, “The images of the food can have absolutely nothing to do with reality itself.” The ghost berries may be difficult for food brands to actually dole out to customers, considering they quickly defrost—but where there’s a will, there’s a way—and at the very least, the food trend could inform future ad campaign imagery. 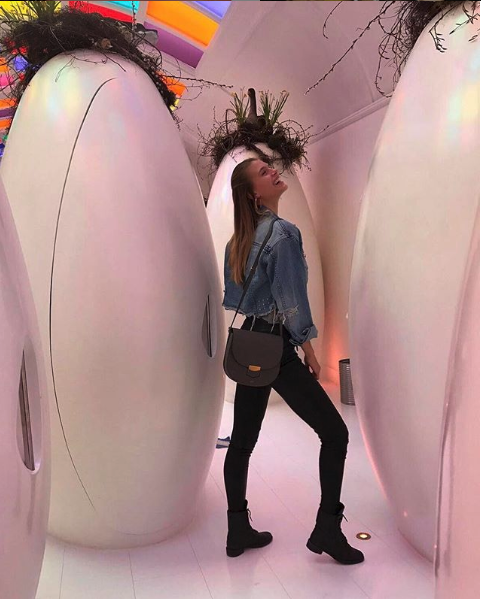 6. Not Overlooking The Bathrooms

Even bathrooms are getting Instagram-ready makeovers for Millennial visitors. Bathroom selfies are officially a “thing,” with “highly stylized” restrooms all over social media feeds. Restaurants (and other locales like clubs) are designing and re-designing bathrooms to be photo-ready, with some encouraging selfie-taking with hashtag suggestions. “Flashy wallpaper,” unique decorations, and, of course, special mirrors are turning bathrooms into destinations, and lists of the most Instagrammable bathrooms by the likes of Vogue are bringing in young visitors, Vox reports. We’d be remiss not to mention the restaurant setting the gold standard for social media worthy restrooms: Sketch London. Pictures of patrons standing by the spaceship-like pods that are made for taking care of business rack up thousands of likes.

Food & Bev Brands Can’t Stop Making Merch
These 5 food & bev brands are riding the merch marketing trend and making fashion f...
Drive-Thrus & Drive-Ins: How Brands Are Using Cars to Bring Back In-Person Events
Cars are currently saving experiencification. These are the brands hosting drive-ins an...
4 Trends From the New Era of Live Content
These virtual live events are the biggest things in marketing, and they’re not going an...