The Best Place For Ads, According To Young Consumers 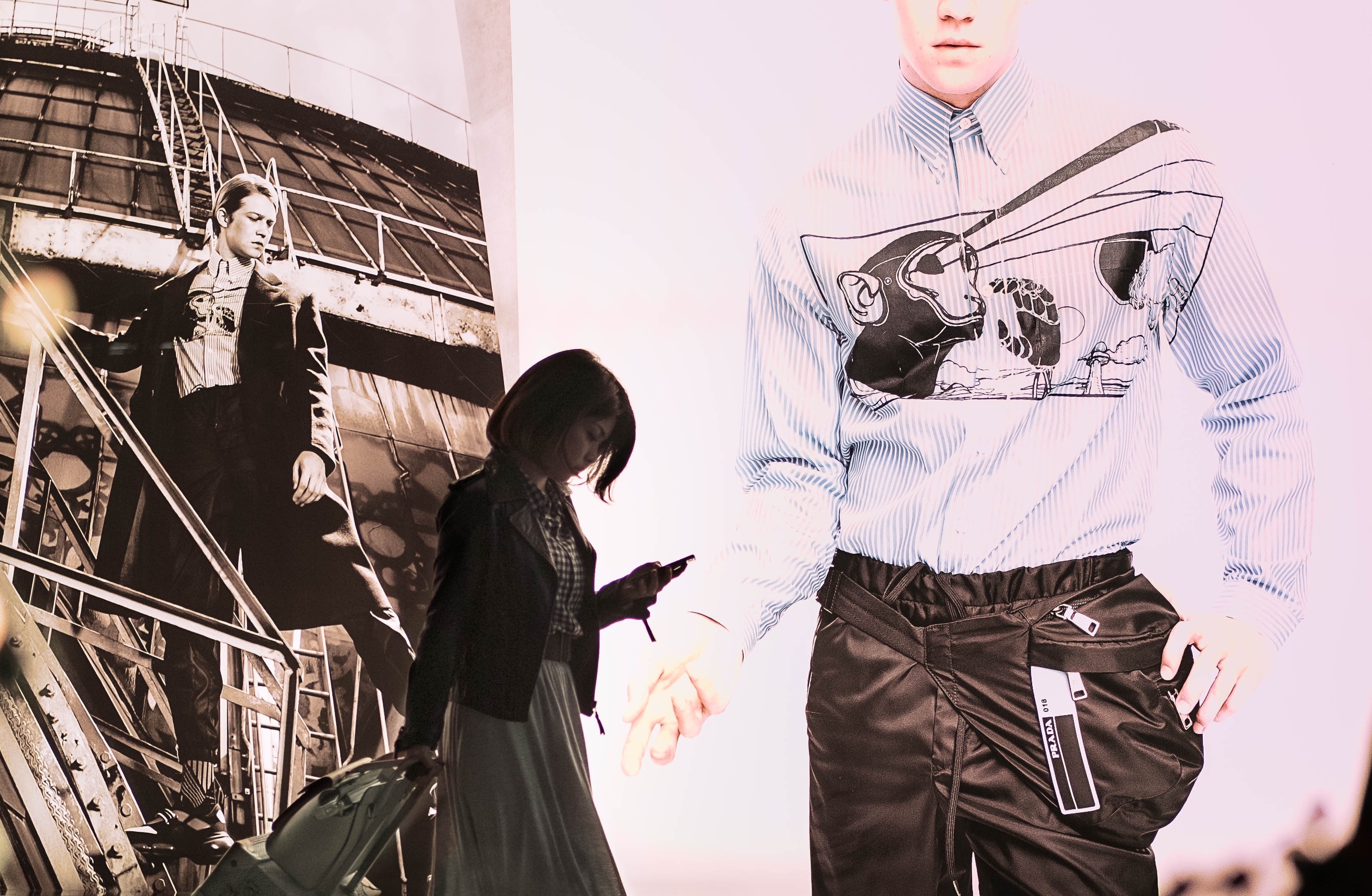 With so many ways to reach young consumers, it’s hard to know just what’s working. We asked 1000 13-35-year-olds to tell us where they saw the last ad that made them purchase something…

When it comes to reaching young consumers today, brands have a lot to consider. Brands today have to not only consider the message and aesthetics of their marketing strategies, but the placement across multiple platforms and devices, too. A strong social media strategy can make or break a brand today. Instagrammable social media posts are currency in the world of young consumers, who are swayed to engage by the most like-worthy shots. On top of that, influencer marketing is no longer an experiment; it’s the way young consumers are finding their next favorite products and brands. Nearly two in five 18-34-year-olds trust digital influencers, according to a recent Fullscreen report. And that’s translating into purchases: one-third have purchased a product recommended by an online influencer compared to two in ten who have purchased a recommendation from a traditional celebrity.

But, as Co.Design put it, the best-loved brands aren’t just projecting one image—they’re dynamic. The TV mentality of a strong, static message isn’t flying with a generation that interacts with brands the way they would with friends—engaging with content all day rather than being hit over the head with primetime commercials in thirty second bursts. Switching up the conversation with consumers can keep them on their toes, and gives brands personality and purpose. But with so many avenues for attracting Millennials and Gen Z now open to brands, its difficult to know just what’s working–and what’s falling between the digital cracks. In our latest monthly survey, we asked 13-35-year-olds, “Think of the last ad you saw that made you want to purchase something. Where did you see it?” Here’s what they had to say: 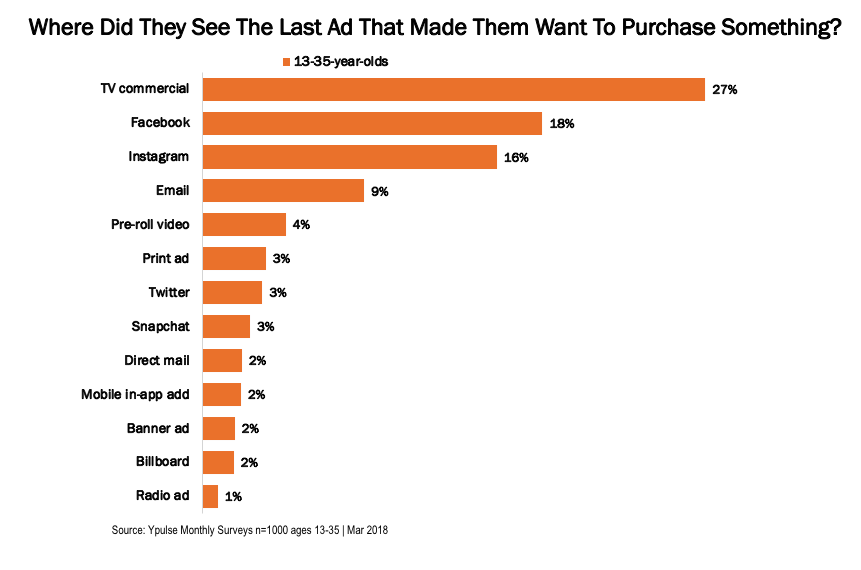 Let’s start with the biggest takeaway: When it comes to influencing purchases, TV commercials are still winning with young consumers. Though TV is one of many cultural mainstays to make the long list of “things Millennials are killing,” the truth is that the medium is still hugely relevant in the lives of 13-35-year-olds. In fact, though we call Gen Z and Millennials the Post-TV Gen, it’s not because they’re ditching TV content (in fact, they can’t get enough of it) but because we’re in a time when the definition of “TV” has completely shifted–it no longer has to be live or linear, and can be consumed anywhere. In the case of Netflix and other ad-less streaming services, that doesn’t bode well for brands. But despite the fact that engagement with live TV overall is dropping, networks are seeing success streaming live events–with ads included. ESPN has engaged Millennials with live sports by adding out-of-home and streaming options, which raised ratings as much as 33% last year, according to Adweek. Overall, Nielsen found that total-day-viewing for 18-34-year-olds rose 23% and 28% for prime-time telecasts.

Additionally, Ypulse data found that 24% of 13-35-year-olds most like to watch live TV, a close second behind “streaming service on a TV screen” (29%). And a report from the Video Advertising Bureau found that broadcast and cable TV are still the best way for brands to reach young consumers–not YouTube, Facebook, or streaming services like Netflix. And it turns out that TV is also where they prefer to see ads: 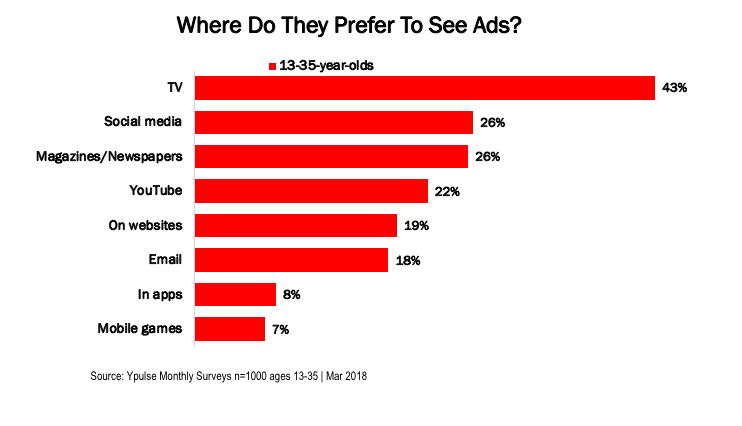 Though 25% of 13-35-year-old respondents told us they’d prefer not to see ads anywhere, almost half said they prefer to see them on TV. Additionally, social media is quickly catching up to TV as an effective form of advertising, and is surpassing most other traditional mediums. In addition to the 26% of Millennials and Gen Z that say they prefer to see ads on social media than anywhere else, 37% say they actually like seeing ads there. Compare that to the 27% who like pre-roll ads and it’s clear that TV and social media are the best ways to target young consumers today.