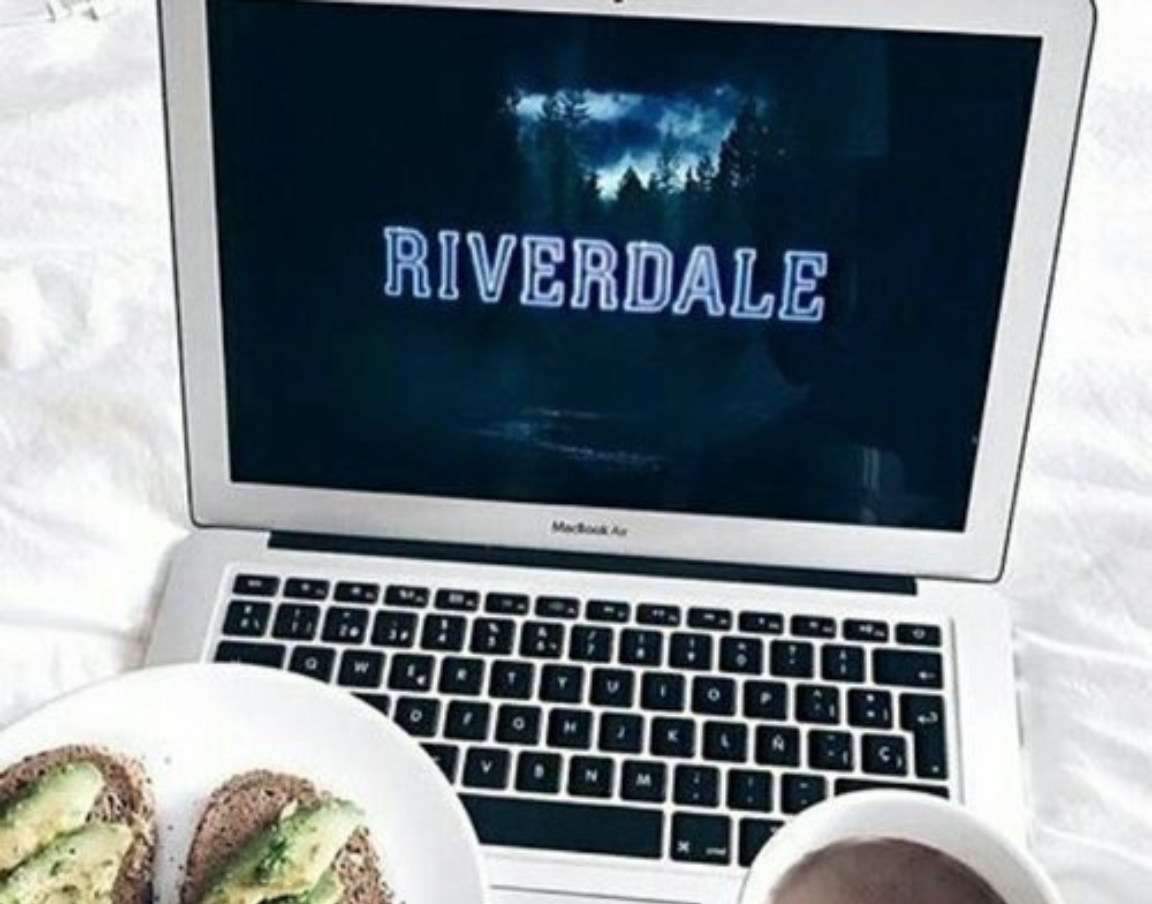 What devices, services, and screens dominated entertainment viewing this year? Our media consumption tracking data looks at all the big shifts to show how young viewers watched TV in 2017…

In 2017, non-linear entertainment continued to take big bites out of traditional TV. Binging is the new normal for watching content, and it might be cutting into primetime TV’s premiere week. People are watching four hours and 21 minutes of live TV a day on average, according to Nielsen, but primetime premiere week saw an 8% drop year over year in viewing among 18-49-year-olds. Stats from Deloitte show that 73% of Americans and 90% of Millennials binge watch, and it may be playing a part in chipping away at live TV viewership. They may be waiting to watch multiple episodes all at once rather than tuning in for a specific single show. It’s not all bad news for cable though—take Riverdale’s October premiere, which pulled impressive ratings, especially among young adults, and may have Netflix to thank for it. The Archie-remake grew in popularity by 67% from last winter’s premiere and 140% with women under 35. But it gained the most ground with teens, jumping an impressive 467% from last winter’s premiere, making it the most popular show from The CW among teens since The Vampire Diaries in 2012. The show’s presence on Netflix during the off-season may actually  have helped attract young viewers, allowing them to binge the series and get addicted on their time—The Binge Effect at work. But whether the impact is positive or negative, there is no denying that young viewers’ consumption behavior is creating big changes.

We keep tabs on those changes throughout the year in our quarterly media consumption tracker survey, where we ask 13-35-year-olds all about the services and devices they’re using to view their video content. Today we’re looking back at the year behind us, to give you a look at how Gen Z and Millennials watched TV in 2017. We’ll start by looking at services. As we’ve said, much has been made this year of Netflix’s effect on cable. So let’s take a look at the two services head-to-head: 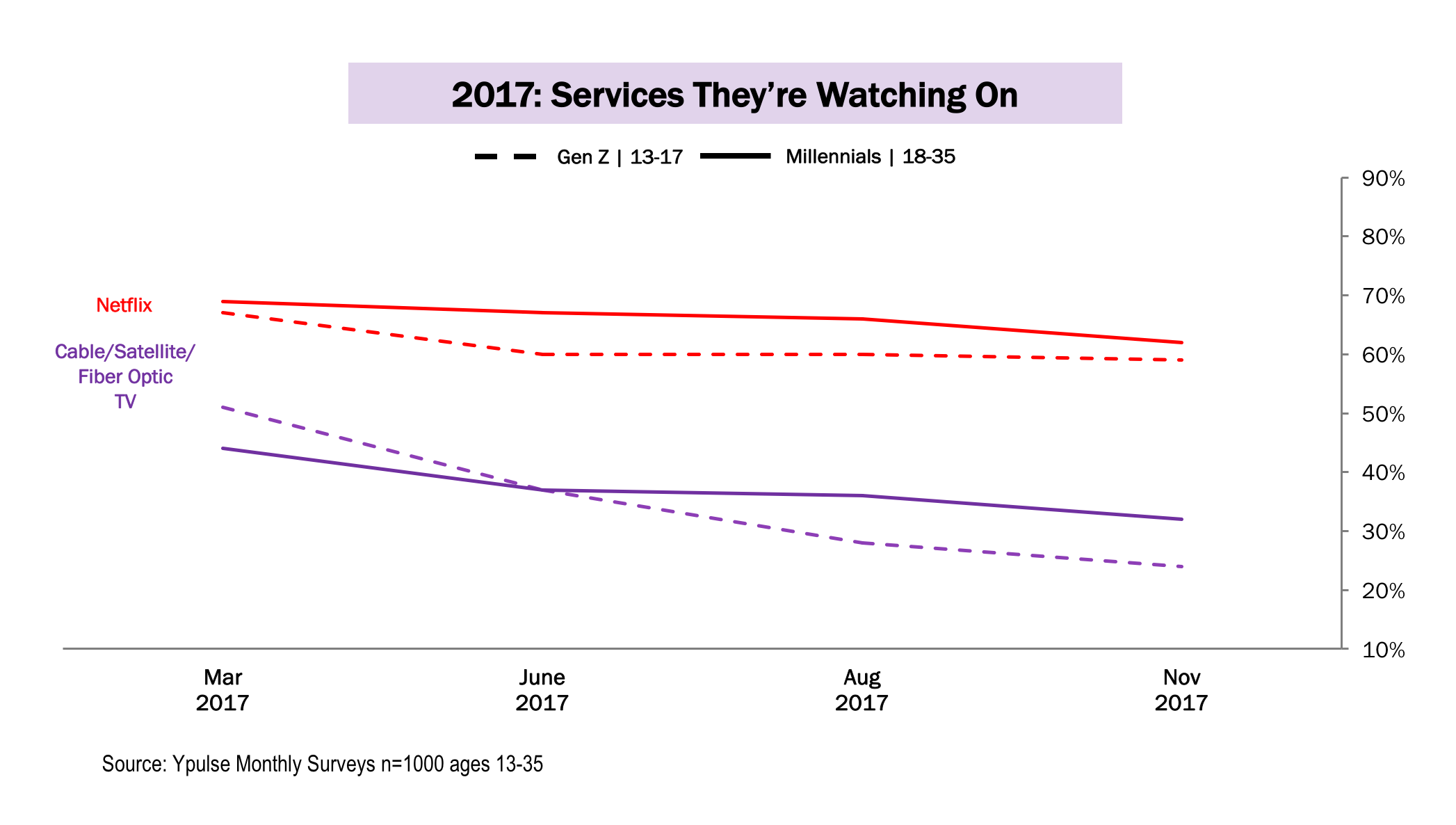 But what about the devices and screens they’re viewing on? 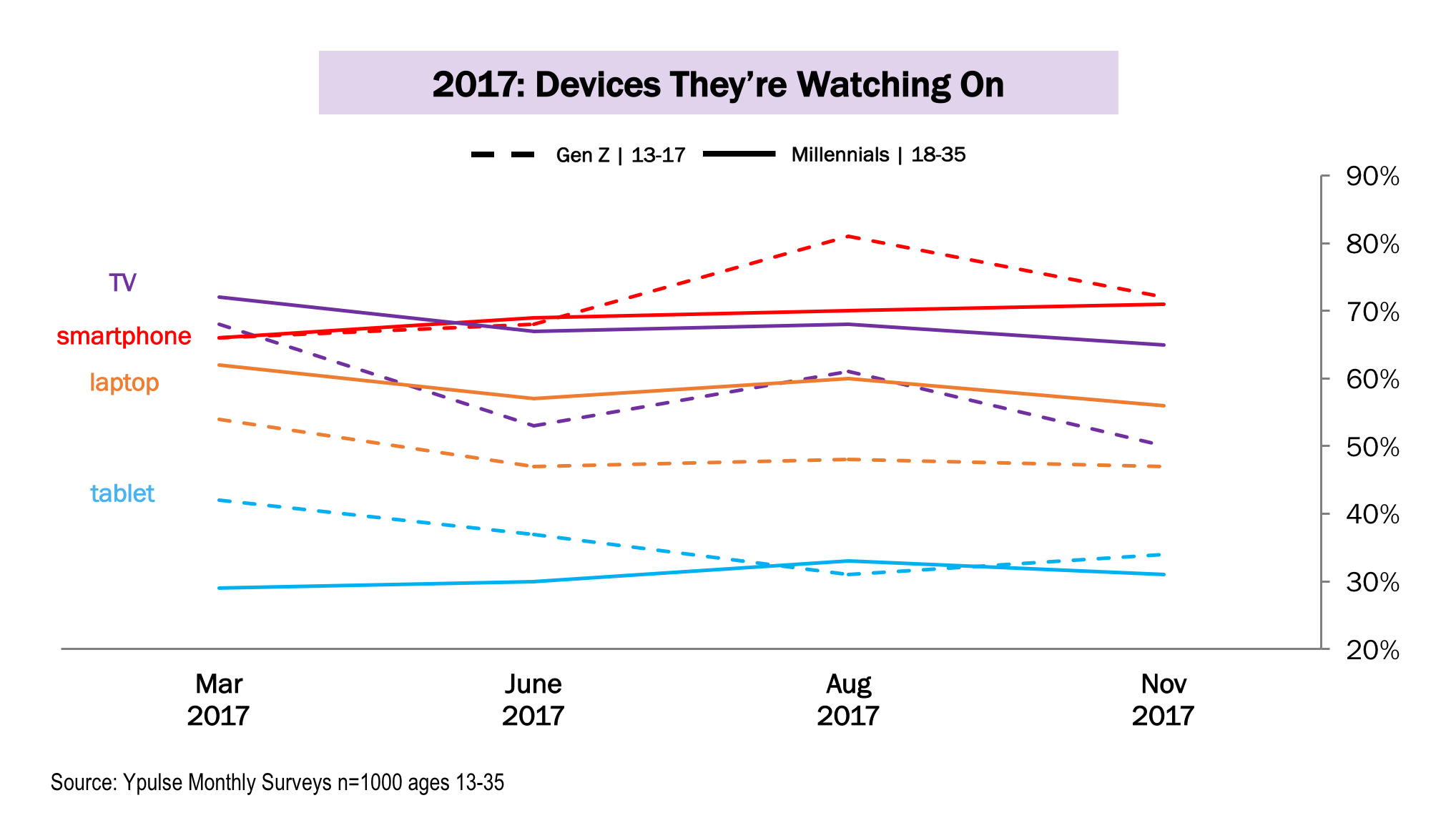 Here we see a real shift. While we started the year with TV as the top device that young consumers reported watching video content on weekly or more, over the course of 2017 smartphones eclipsed TV in popularity among both Gen Z and Millennials. Among Gen Z, TV also fell below laptops by November. While YouTube and social media videos likely make up the bulk of their mobile viewing, interestingly, Netflix is growing fastest on smartphones. Since 2014, the amount of time Americans spent watching Netflix on their phones has skyrocketed 73%, to 7.5 billion total minutes. In that same time, all other digital viewership has increased only 48%. The Netflix app on Google Play and iOS was the highest grossing of all apps, meaning people aren’t just streaming via smartphone but also buying subscriptions there.

But while smartphones now dominate as the devices they’re most likely to watch entertainment content on weekly, we see a slightly different story when we ask the device they most like to watch on. 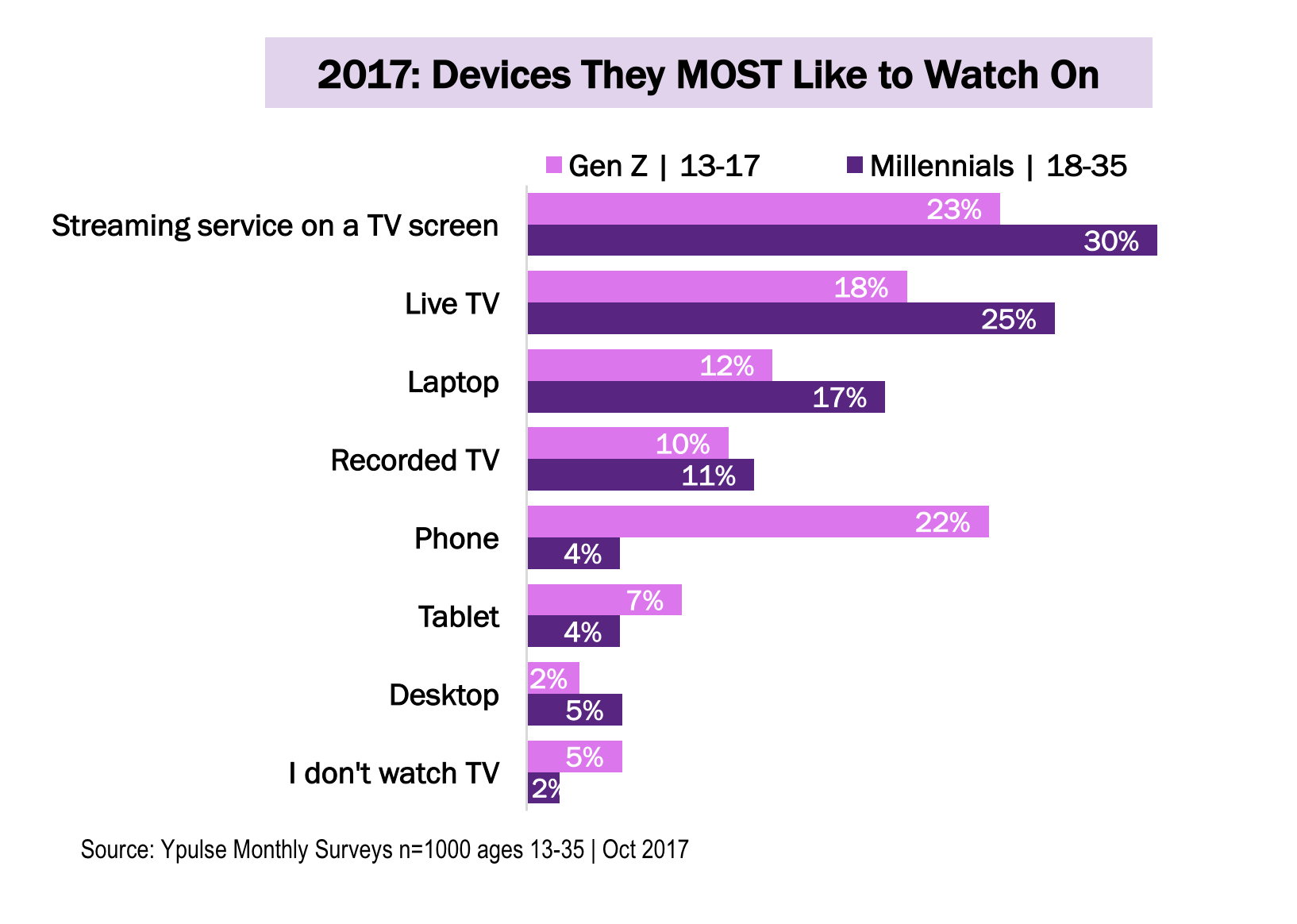 Here, watching content via a streaming service on a TV screen is the favorite way of watching content among Millennials, and is neck-and-neck with phones among Gen Z. So while phones are undoubtedly the screen that brands need to focus their marketing efforts on, streaming services are, for all intents and purposes, replacing traditional TV content and it’s essential that brands adjust as well.