Are Gen Z & Millennials Watching the Same Kind Of Content? Sort Of

What kind of video content are Gen Z and Millennials watching weekly? The generations aren’t necessarily tuning into the same genres…

All young consumers are disrupting the industry, but also exhibit different preferences and habits. Millennials are driving cable cutting and making Netflix an addiction, while Gen Z (still under their parents’ roofs) are driving mobile video consumption, where they’re fueling the popularity of social video platforms. Ypulse’s quarterly media consumption tracker keeps tabs on both generations’ shifting preferences, from the screens they’re watching on to the genres they’re tuning into. In our most recent media consumption survey, we confirmed that Gen Z is more likely than Millennials to say they use their smartphones to watch video content weekly or more (though it is now the top screen among both groups) and Millennials are far more likely to say they pay for an online streaming account like Netflix or Hulu. But we also looked at the kinds of video they’re watching on these devices and services. First, we asked what kind of overall video content they’re watching weekly, telling respondents that video content can be movies, TV shows, series on streaming services, online videos, etc. Here are some of the differences we found between Millennial and Gen Z preferences: 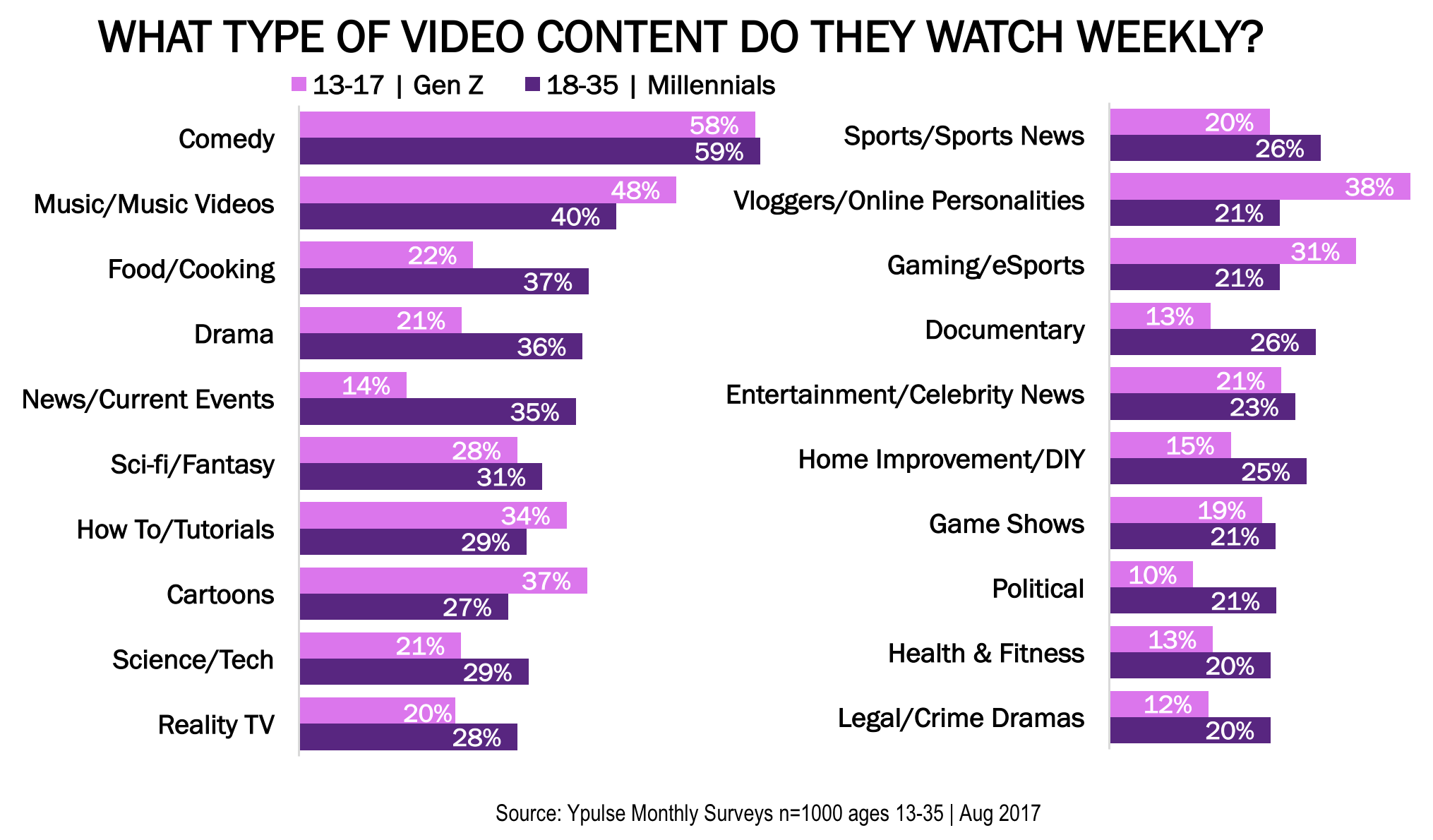 Comedy is the top video content that both Gen Z and Millennials are watching weekly, followed by music/music videos. But we see some stark differences between the groups. Millennials are far more likely to say they’re watching food/cooking videos, drama, news content, and documentaries than Gen Z. Meanwhile, Gen Z is more likely than Millennials to watch cartoons, and—not surprisingly considering the Influencer Effect—vlogger/online personality content.

We continue to see differences when looking at more specific video types. When we asked what types of television content they watch weekly, Millennials were more likely to tune into a variety of TV content:

Vloggers/online personalities are actually the top type of short-form content that Gen Z is tuning into weekly, while Millennials are most likely to watch—you guessed it—comedy. Gen Z was also more likely to say they watch gaming/esports, and slightly more likely to say they watch beauty content. Millennials are far more likely than Gen Z to be watching short-form food/cooking content, news content, and home improvement/DIY, perhaps showing that their interests stay consistent across platforms.

North America
Young People Are Seriously Done With Facebook on The Viral List
TL;DR Facebook is in hot water with already waning young users for supplyi...
North America
Gen Z and Millennials Are Using QR Codes for More Than You Think
QR codes are the easiest way to deliver young consumers a link, and they’re ready ...
North America
Young Consumers Are Trusting Influencers For These Product Recommendations
Young consumers trust online celebrities more than any other public figure—and thes...