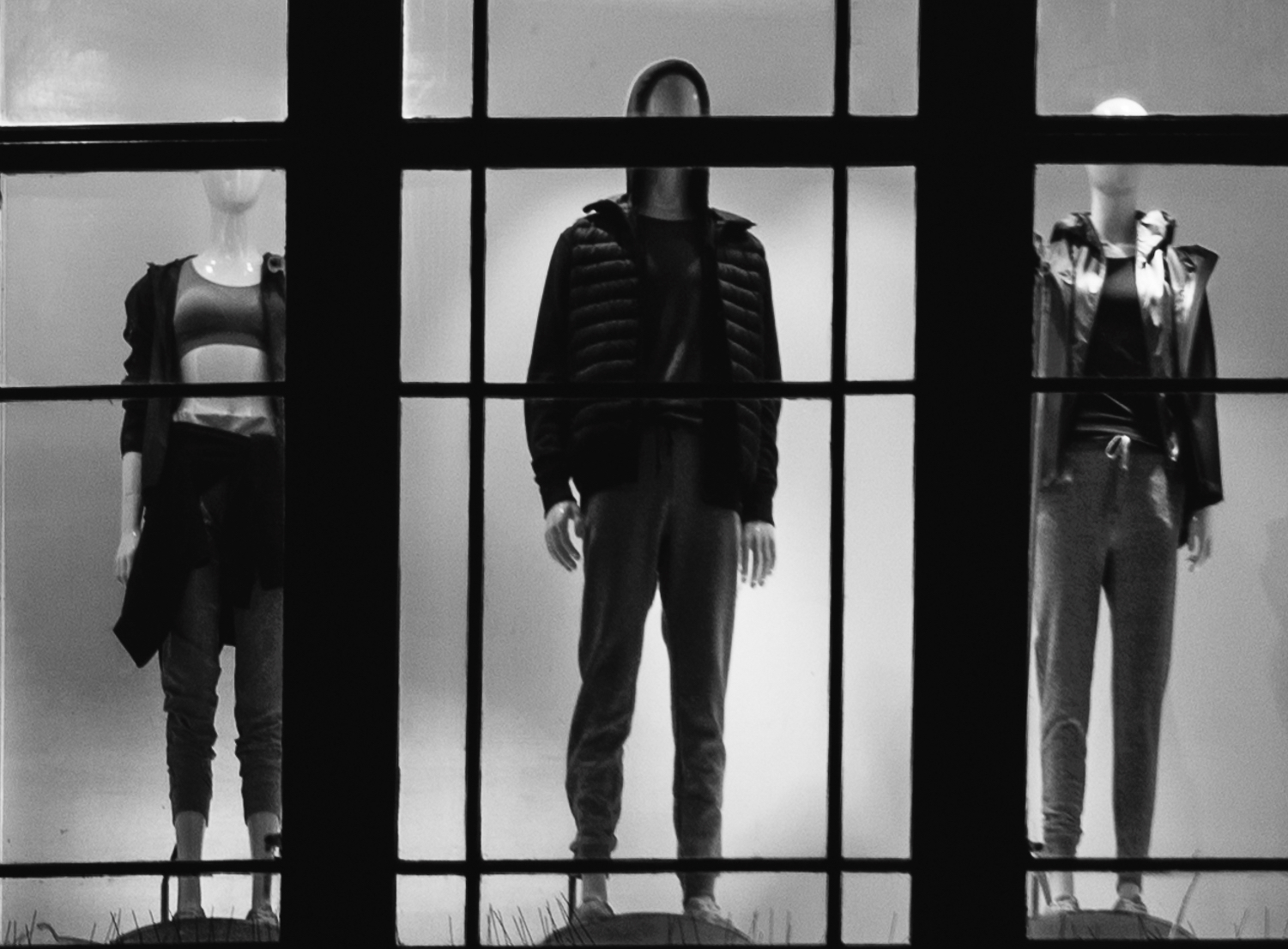 Ypulse’s predictions for 2017 included our forecast that the struggling retail landscape will continue to adjust to online competition by shifting to select experiences—a major change from opening as many, and as giant stores as possible to instead creating fewer locations that offer more than just racks of clothes. Experiencification is a big part of this trend, as retailers strive to create brick-and-mortar locations that have the ability to spark buzz and give young consumers a reason to step out from behind their computer screens—Instagrammable design, style consultants, hands-on product exploration, and in-store dining are all examples of this. But these blinged-out stores and immersions are still more retail future than retail present, and most brands need to attract young shoppers with the basics: product, ambiance, aesthetics, staff, etc. Unfortunately, as we found out when we asked about their least favorite place to buy clothing, this is where many are missing the mark.

To find out what stores are failing to deliver the retail experiences that Millennials and Gen Z want, we asked 1000 13-34-year-olds, “What is your least favorite place to shop for clothing?”* Here are the 20 brands that were mentioned the most:

What’s Their LEAST Favorite Place to Shop for Clothing?

As we called out in our coverage of young consumers’ favorite and least favorite clothing brands, there is clear crossover between the least and most favorite list. Generations have common characteristics and values, but they’re not a monolith, and differences in opinion within the groups are expected. Because of these dynamic differences in perception, opinion, and behavior within this massive youth population, a significant percentage of young people might love a brand for certain reasons, and an equally significant percentage of young people might dislike this same brand for the very same reasons, or completely different reasons. Looking at the “whys” behind these likes and dislikes is telling, and can provide a kind of “report card” of consumer sentiment and brand performance—which we explored when looking at why Millennials are divided on some major clothing brands.

We can also tell something from a brand’s position on each list. Are they at the top of favorite and at the bottom of least? They might be in better shape than a brand at the top of the least favorite and at the bottom of favorite. And those brands that appear on just the least favorite list might have the most problems. In this case, that’s Abercrombie & Fitch, Hollister, Sears, and Kmart. Abercrombie & Fitch’s issues with young consumers are well documented, and the brand recently launched new stores to show off their image makeover—which they clearly need.

But Walmart is at the top of the least favorite list, receiving almost twice as many mentions as the second ranking “mall.” Clothing quality and store ambiance seem to be the biggest reasons behind their dislike. One 15-year-old female explained, “It’s weird and the clothes aren’t nice,”  and a male 13-year-old said, “you just don’t wear the clothes unless you want made fun of.” Outside of the teen set, opinions were not much better, with a 33-year-old female telling us, “The lighting is terrible, it’s hard to get a changing room, and the selection is small.” When we look at least favorite brands by gender and age, Walmart’s universal top ranking holds up: 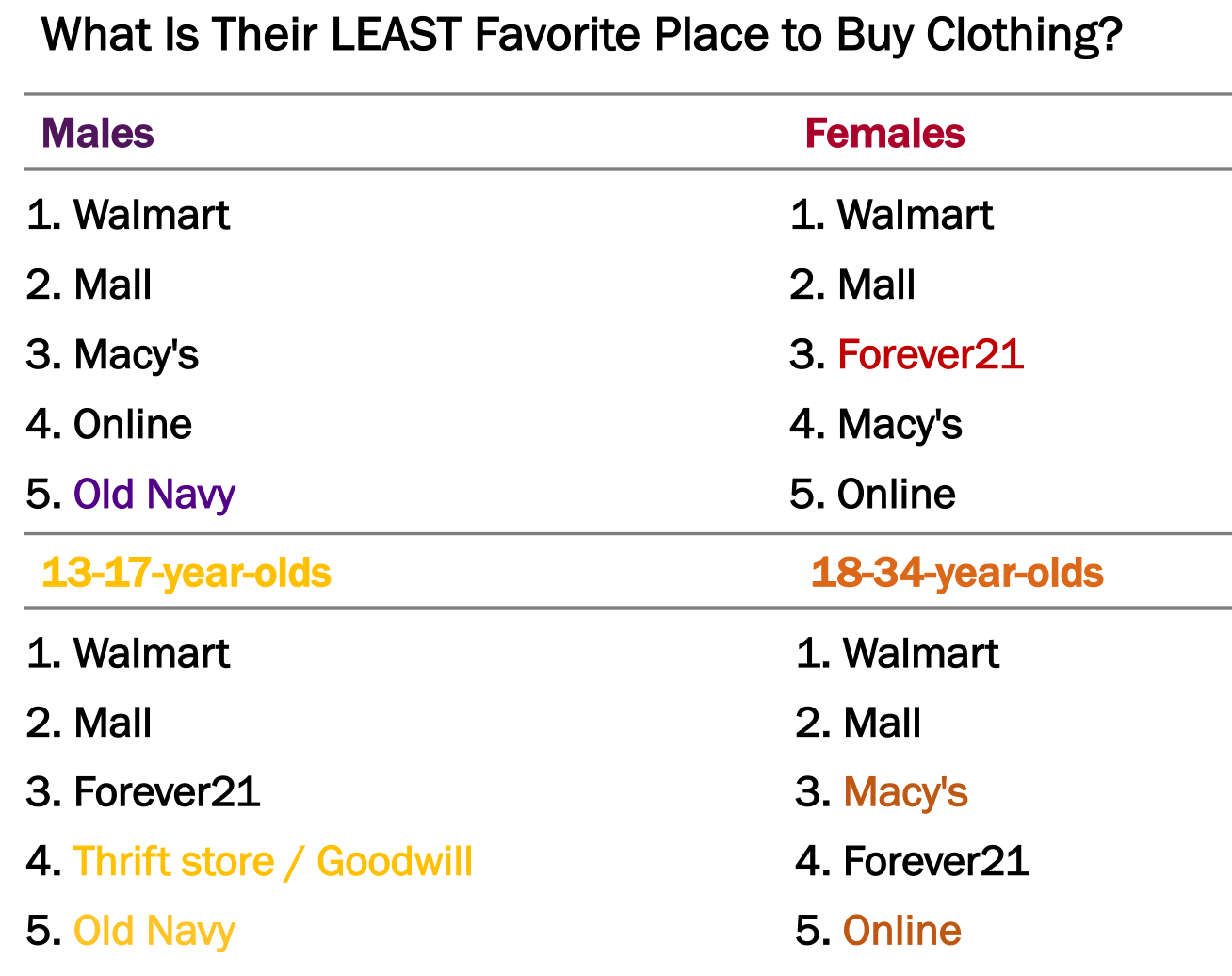