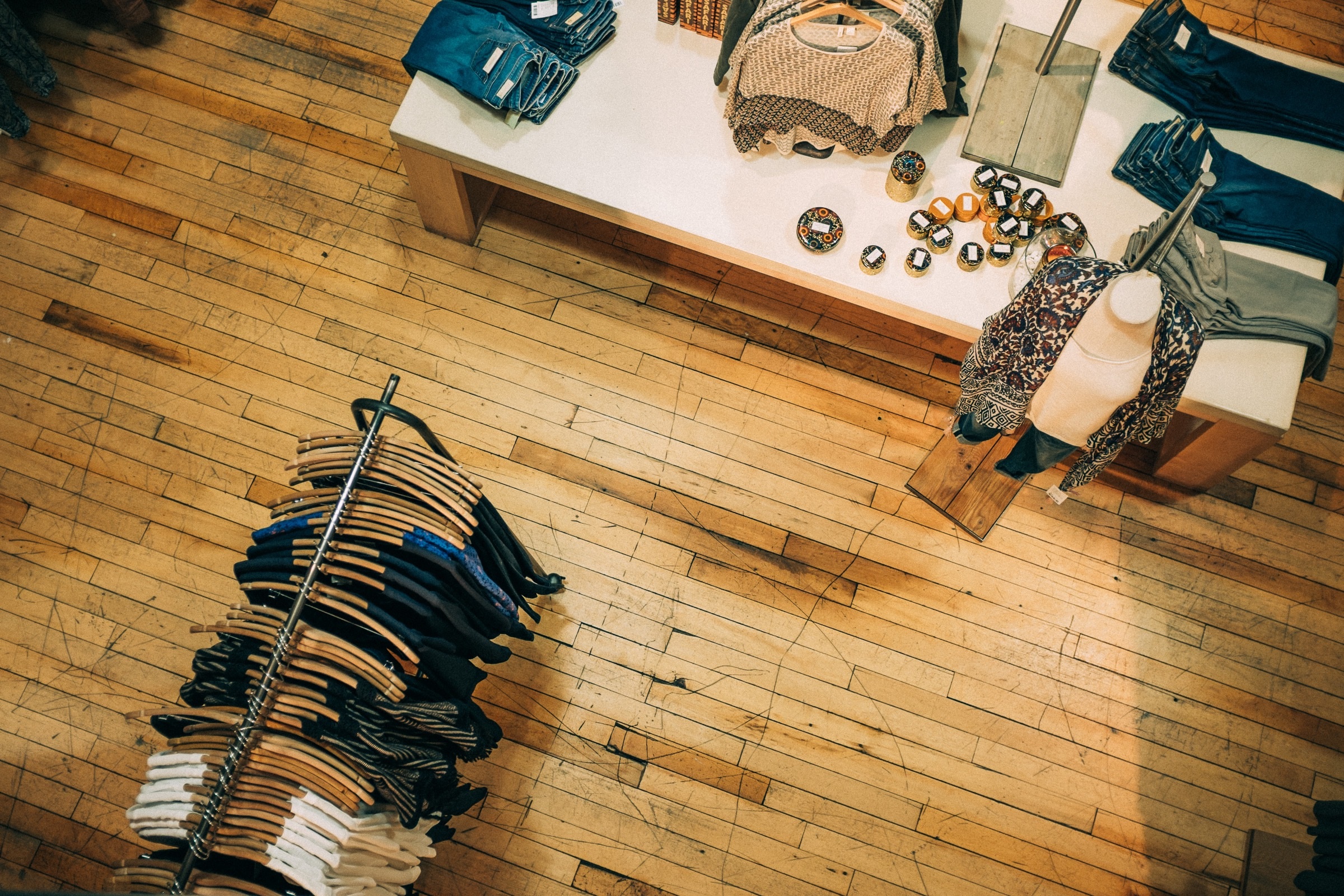 We asked 1000 13-34-year-olds to tell us what their least favorite clothing brand is, and why…

It’s telling that when we ranked Millennials & Gen Z’s 20 favorite clothing brands last week, we still had to talk about the complete havoc that young consumers have been wreaking over the retail landscape. Wet Seal, The Limited, and American Apparel are just three recent examples of formerly shining youth brands forced to close down retail locations. These days brands are going to extremes—from major makeovers to business model reboots to experiencification—to attract them to stores. In short: the opinions of Millennials and Gen Z can make or break brands, and they’re doing everything they can to stay in their good graces.

We’ve been keeping track of their favorites for some time to keep tabs on the brands that are staying positive in their eyes. But this year, we also asked them to tell us what clothing brands they don’t like right now, and why. In a recent Ypulse monthly survey, we asked 1000 13-34-year-olds to answer the question, “What is your least favorite brand of clothing? Think of the name on the label.”* We’ve ranked their top 20 responses into an unliked list:

What Are Their Least Favorite Clothing Brands?

There you have it. Abercrombie & Fitch is at the top of the list of least favorite clothing brands, receiving the most mentions. But before we get to that, first we’ll address the fact that there is definite crossover between the least favorite list and the favorite list. As we often tell brands, generations have common characteristics and values, but they’re not a monolith, and so of course differences in opinion within the groups is going to occur. At the same time, when a brand appears on both lists, we can see that it’s polarizing—the “whys” behind what is attracting the fans and repelling the detractors are telling in this case, and we’ll explore that further in the future. We can also learn from the above the brands that appeared only on the “least favorite” list, and intuit that they are likely in worse shape than those that appeared on both.

So what landed Abercrombie the spot as the least liked clothing brand? Atmosphere which is obviously key for young consumers, as evidenced by responses as to why Abercrombie & Fitch ended up on their list. “Too loud,” “overpowering smell,” “and “dark lighting” were all used as phrases to negatively describe the in-store experience. One 27-year-old female went into detail summing up her feelings on the matter: “I feel like I’m being judged by their sales associates. They spray so much of their colognes that you can taste it and the music is so loud that it’s hard to hear anyone around you. The combination of the music and the smell will have you walking out with a headache.” Recently the retailer launched a new store to accompany their ongoing image makeover, that is made up of marble and wood, is brighter, and smells of a “lighter, cleaner, gender-neutral fragrance”—a smart move considering young consumers’ desires, but it’s hard to tell if it will be enough to change their opinions at this point.

Along with the locations, young consumers also had issues with the brand’s clothes that tend to run small, are “unfashionable,” and are “overly priced.” But how did the brand do when we compare males, females, teens/Gen Z, and Millennials? 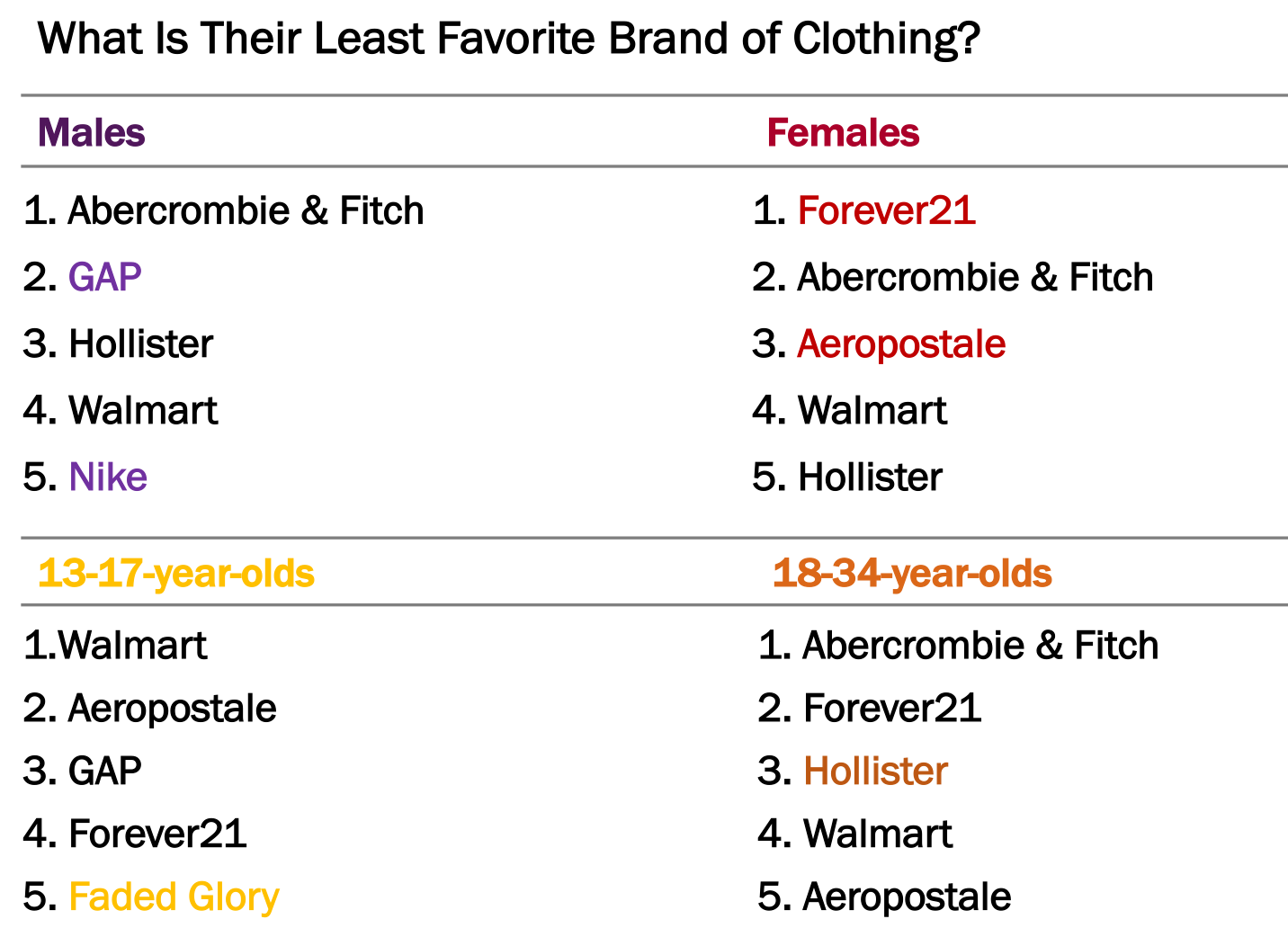 Abercrombie is at the top of the list for males and 18-34-year-olds, but females were more likely to name Forever21 as their least favorite clothing brand, and teens were more likely to name Walmart. The fact that their Faded Glory label also made the teen top five, and that they’re another brand that appeared only on the “least favorite” list might indicate a need for them to adjust things to win over young consumers.