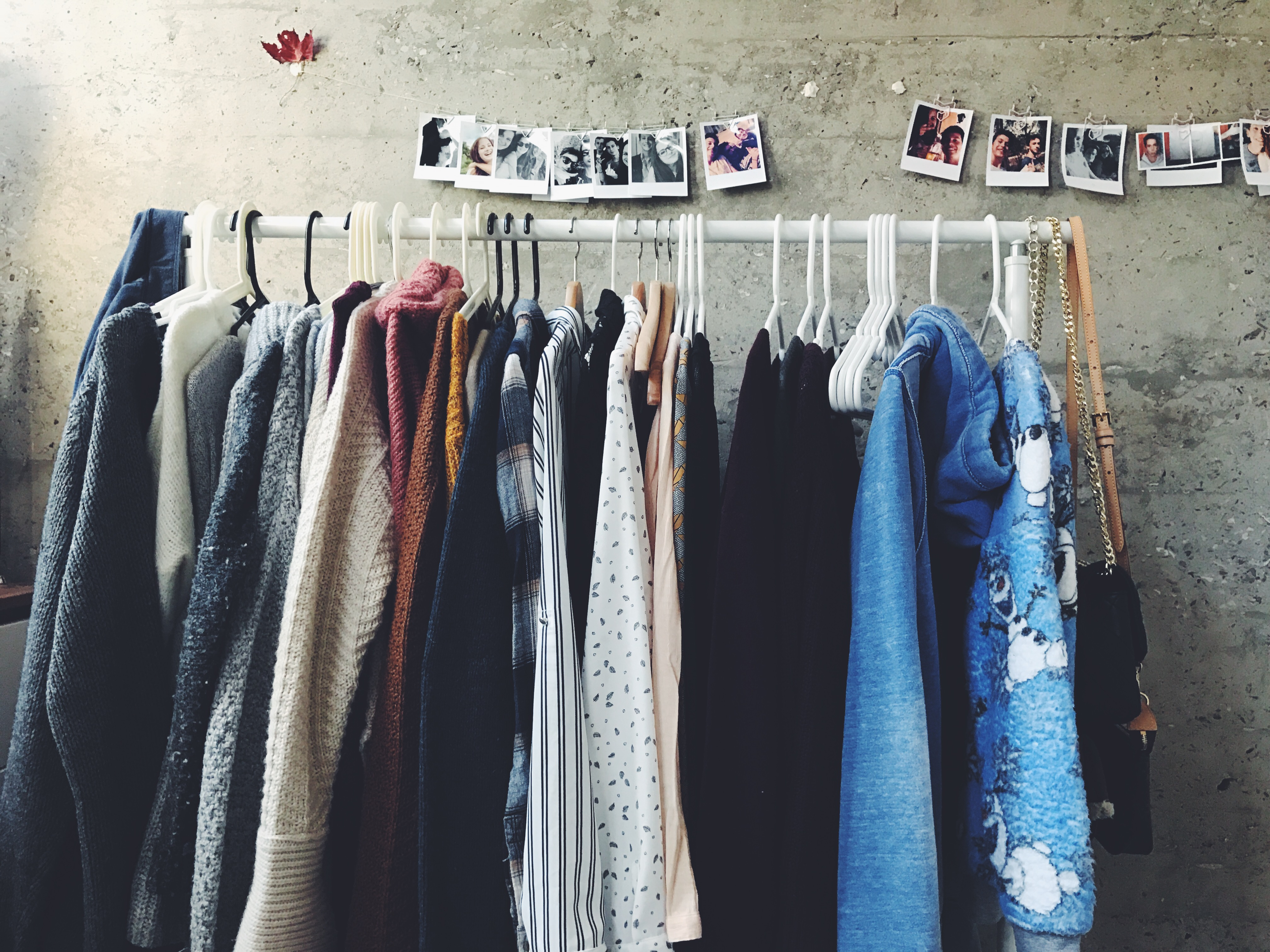 The opinions of Millennials and Gen Z can make or break brands, and they’re doing everything they can to stay in their good graces—and get them into stores. These days brands are going to extremes—from major makeovers to business model reboots to experiencification—to bring them offline, and off Amazon, and into brick-and-mortar locations. American Eagle is experimenting with serving teens (non-alcoholic) fancy drinks in stores with the café concept Drink, Abercrombie & Fitch has launched new “warm, inviting, inclusive, and open” stores to show off their image makeover, Sunglass Hut is luring Millennials in-store with the promise of the perfect selfie. Once e-commerce only, Warby Parker is expanding with 25 retail locations this year featuring vintage arcade games, photo booths, and salespeople armed with past online consumers’ preferences, with the mentality that it isn’t “retail [that] is dead, [but] mediocre retail experiences”—a concept we discussed in our predictions for 2017, and our Experiencification trend.

There are multiple ways that physical shopping is still playing a role in young consumers’ behavior—and entwining with online shopping. A new GFK study found almost half of 18-26-year-olds in the U.S. are engaging in ‘webrooming,’ or researching a product online and then purchasing in person. This form of shopping among the group has increased by 5% from 2015, with a little over half saying it is the cost of delivery that is influencing them. About a one-third also say they’ve done the opposite—researched in-store than bought online—signifying that the group is shopping from multiple channels. In fact, Aldo credits their “Channel Agnostic Strategy” for their lasting success with young consumers.

New efforts to improve the in-store experience are a clear reaction to how retail has struggled in recent years as young consumers have moved more of their shopping online, and pushed more of their spending towards experiences. But where do they like to shop right now? And how much do their favorite clothing brands—and their least—line up with their favorite places to go and buy clothing? To find out, we asked 100 13-34-year-olds, “What is your favorite place to buy clothing (thinking of the store/site where you actually most like to purchase clothing)?”* Here are the 20 retailers and retail spaces that received the most mentions:

For the second year in a row, Kohl’s made the top of the ranking of their favorite places to buy clothes. Because far more females named Kohl’s as their favorite place to shop than males, we’ll focus on their reasons for naming the retailer—which were driven by sales, deals, and discounts. We know that Millennials are discount hunters, and Kohl’s has built a system that allows them to combine discounts on top of sales, making them feel like they’re getting the best deal possible. One 33-year-old female told us, “I wait until sales start—clothes end up being same price as cheaper stores. Also like the Kohl’s cash and yes rewards.” A 29-year-old female echoed, “So many sales and can stack with coupons and earning rewards back.”

Familiarity was also a reason for some: a 34-year-old female explained, “I’m used to it and they have a lot of clearance prices plus if you’re here at the right time you can combine many discounts and save a lot of money,” while a 25-year-old female said, “They almost always have sales and it’s the clothing I’ve worn most of my life so I know my sizes.”

The fact that Kohl’s is at the top of the list might be positive, but the fact that their ranking relies on discounts and deals is potentially not. Word is that the brand is struggling to turn profits and they reportedly plans to reduce inventory and footage through 2019. Meanwhile, Kohl’s standing is not as strong among all groups: 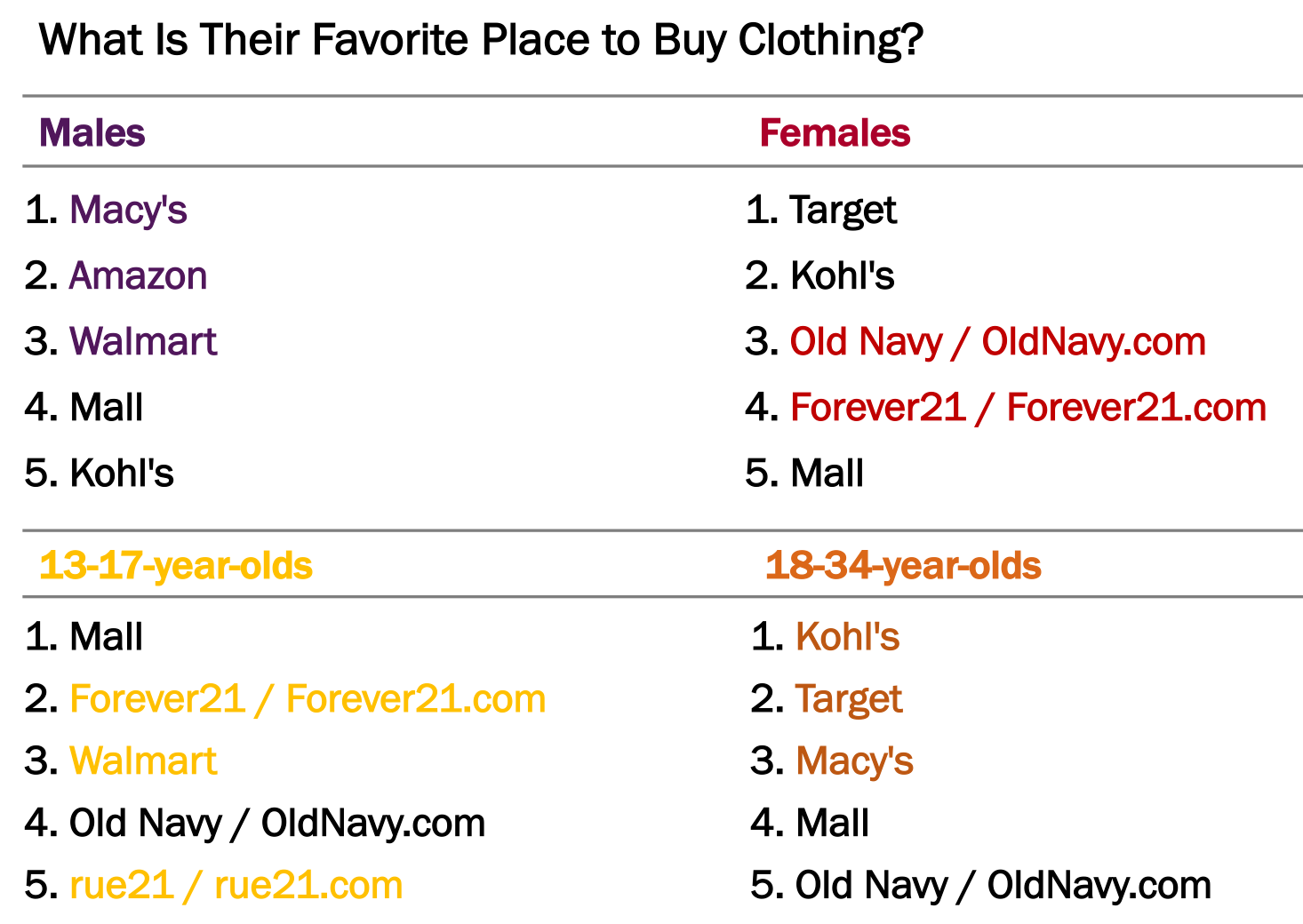 While females drove Kohl’s ranking as the number one favorite place to buy clothing, it’s not actually their number one: that honor goes to Target—though the two were close enough to be considered a tie. Among males, Macy’s made the top spot, followed closely by Amazon—convenience seems to be a larger driver for their retail preferences. One 22-year-old male told us he named Amazon because, “I don’t have to talk to people.”

It’s notable that even though the mall does not hold the cultural, or even retail, relevance that it once did, it was second in the overall rankings of favorite places to shop, and made the top five for each group. Variety and the desire for hands-on time with products were the biggest themes in young consumers’ reasons for naming it—indicating again that in-store experiences are still desired.