The Rising Demand For LGBT Characters

Hollywood is being put on blast by online campaigns that are passionately demanding more LGBT representation in mainstream entertainment.

There is no doubt that Millennials and teens are more open about their sexual orientation than previous generations, and more likely to see sexuality as a spectrum. The Center For Disease Prevention reported in 2014 that, “Based on the 2013 NHIS data [collected in 2013 from 34,557 adults aged 18 and over], 96.6% of adults identified as straight, 1.6% identified as gay or lesbian, and 0.7% identified as bisexual. The remaining 1.1% of adults identified as “something else [0.2%,]” stated “I don’t know the answer [0.4%]” or refused to provide an answer [0.6%].” But when we asked Millennials and teens their sexual orientation for our Genreless Generation trend, over 15% identify as something other than heterosexual. The majority of 13-33-year-olds believe that sexuality is more fluid than binary. Here again we see the dislike of labels on the rise. Though 82% overall say their sexual orientation is heterosexual/straight, 32% of 18-33-year-olds and 43% of 13-17-year-olds agree they don’t like to be categorized as either straight or gay. 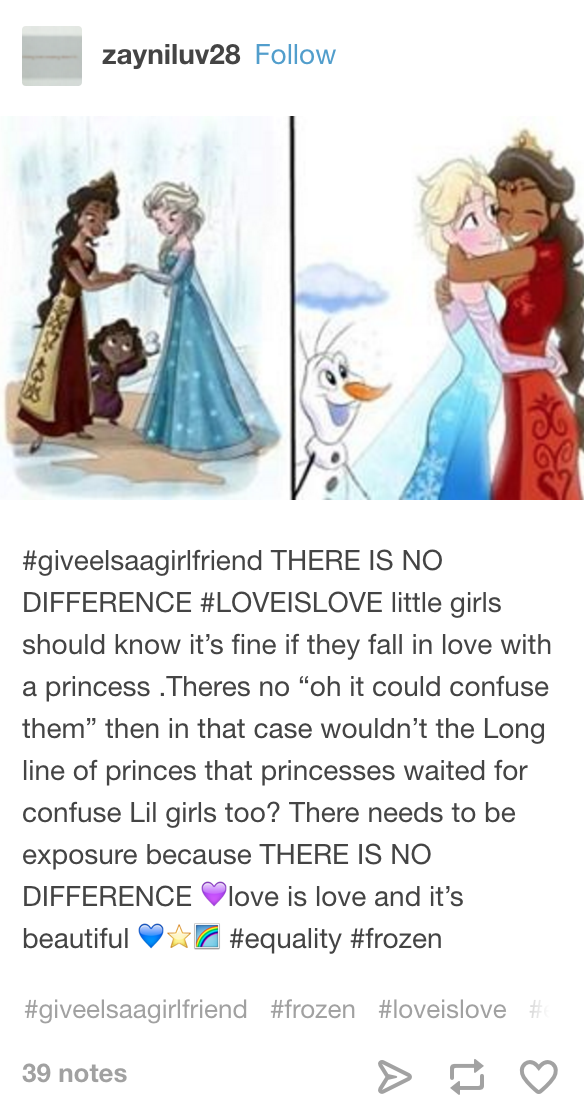 The desire for LGBT representation is a big part of the new era of inclusive marketing. It’s not just about skin color anymore; it’s also about size, disabilities, gender, and sexuality. It is no secret that Millennials are sensitive about inclusivity—you can blame their team-oriented upbringings and highly attuned political correctness meters if you’d like. When some brands began to embrace the LGBT rights movement, we saw a positive reaction from young consumers, and now ads that feature same-sex couples, while hardly common, are not hard to find. Their passion about LGBT rights can have an effect on their perception of brands. When we asked in 2014 how it would affect their opinion if a brand they liked took a stance to actively support LGBT rights, 40% said they would like the brand more, and 28% said they would make a point to buy their products more often. Recently, Apple made headlines and drew criticism for removing a same-sex couple from a Mother’s Day campaign in six different countries—another sign that LGBT representation is an expectation for many.

But the young consumers are no longer content with the occasional glimpse of same-sex couples in ads. Recent online campaigns have made it clear that the rising demand for LGBT characters is a cause du jour, and Hollywood is being put on blast by many young consumers online who want mainstream films and entertainment to include gay and lesbian characters. Two trending hashtags that appeared almost back-to-back have been the main focus of the mini-movement. 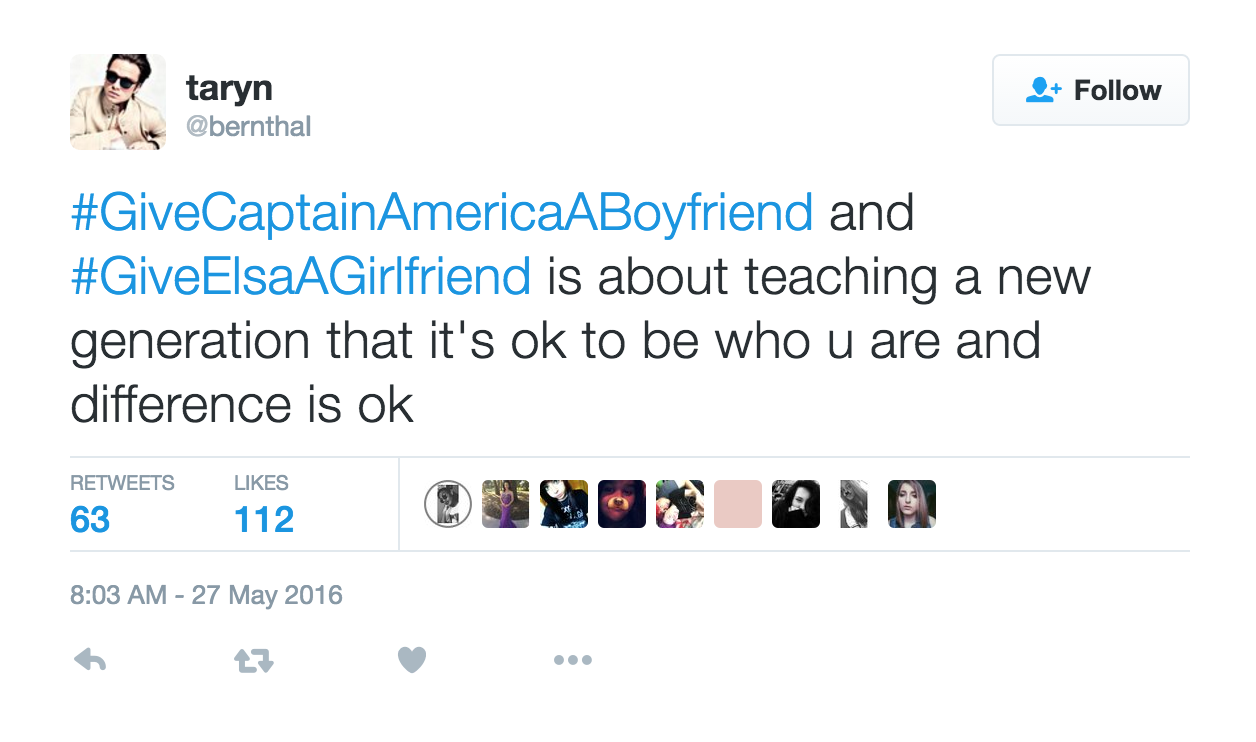 Seventeen-year-old Alex Isabel is “the girl behind” #GiveElsaAGirlfriend, a hashtag-based social media campaign that is asking Disney to give Frozen’s Princess Elsa a same-sex partner in the film’s sequel. The movement has taken Twitter, Tumblr, and other platforms by storm, with young users posting messages like, “#GiveElsaAGirlfriend because it would be nice to see a lesbian couple in a Disney movie and kids will learn that love is love, no matter what gender,” and “#GiveElsaAGirlfriend because it’ll teach children the different kinds of love & help LGBT kids accept themselves.” The hashtag has incited plenty of headlines as well, most notably when the actress and singer who voices Elsa, Idina Menzel, hinted at her support of the idea. 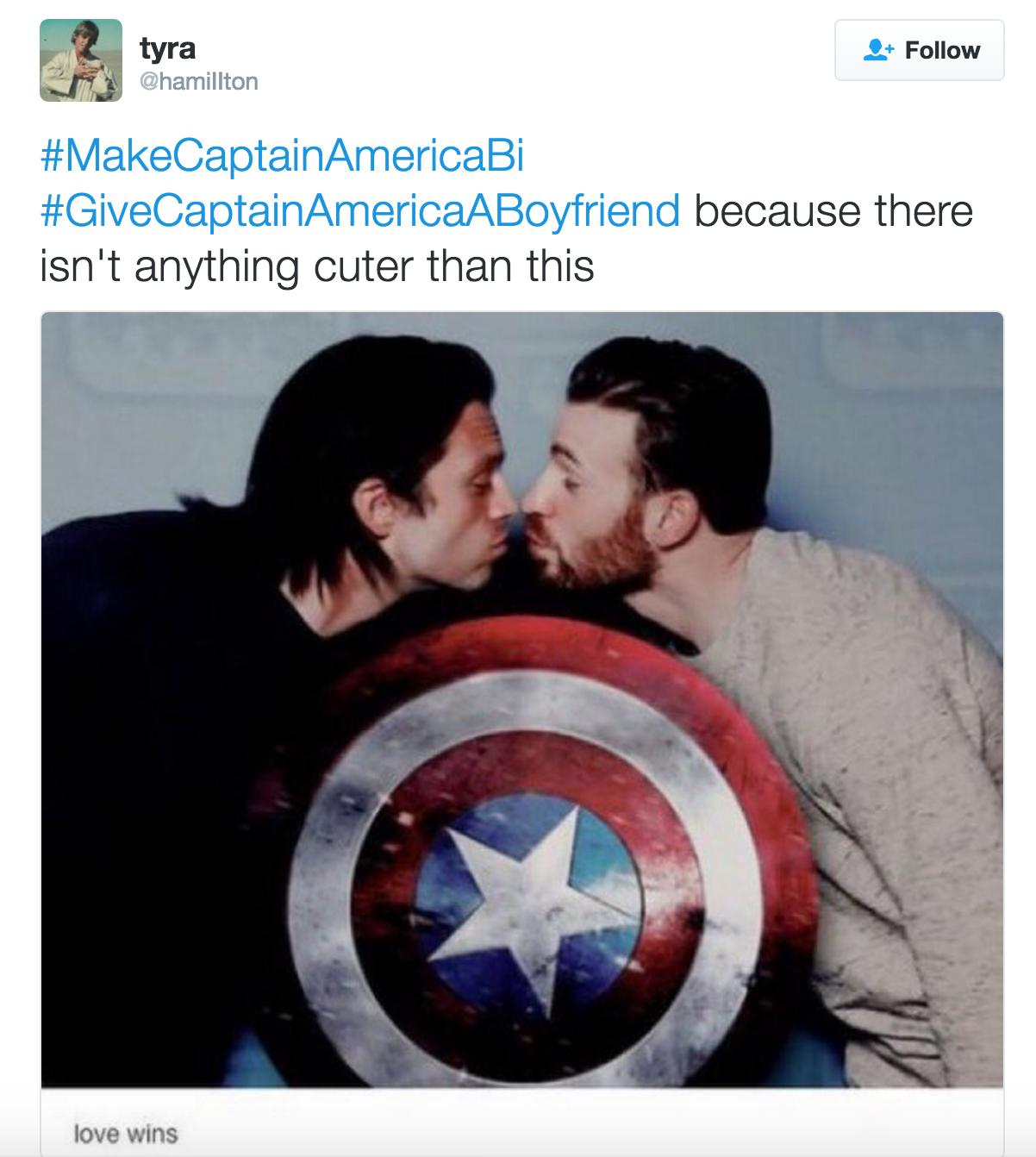 uickly after #GiveElsaAGirlfriend began to trend, 18-year-old Jess Salerno started the hashtag #GiveCaptainAmericaABoyfriend, which took off just as quickly. The idea behind the campaign is that Marvel’s Captain America already has a deep love for his long-time friend in the films, so the step to a same-sex relationship would not be a big one. The campaign has sparked a response from GLAAD, and responses from the actors in the franchise as well, though unsurprisingly Disney has kept mum on both hashtag trends.

Inspired by trending hashtags #GiveCaptainAmericaABoyfriend and #GiveElsaAGirlfriend, one director decided to show film studios what LGBT representation should look like through a trailer. The video, created by Mike Buonaiuto, starts by stating that Iceman, Mystique, and Catwoman were all LGBT within their comic books, but have been portrayed as heterosexual on screen. What follows is a reimaging of superheroes portrayed as they were in their original stories, and a call out to film studios to “stick to the script.” Out of 126 movies released in 2015, only 17.5% included characters who identified at LGBT. Buonaiuto ultimately hopes studios can give “LGBT kids a hero they can look up to,” especially since he could’ve used the same: “It’s such a shame because when I was ‘coming out’ as, having positive icons and role models of LGBT people in mass media would have be a huge confidence boost to myself and millions of others who look up to characters such as superheroes.”