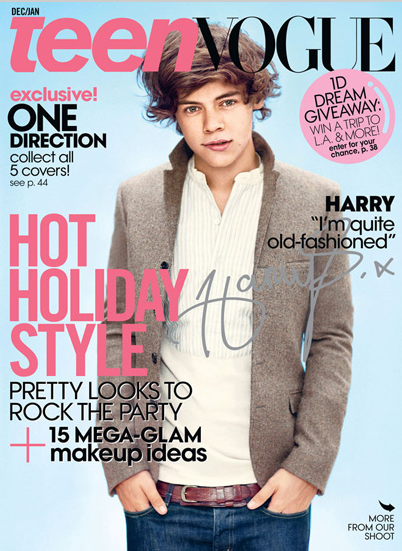 Few phenomena have reached the level of fandom among teen girls as One Direction and “The Twilight Saga,” so it’s only fitting that these two topics appear on the cover of December/January teen magazines. One Direction have established themselves as the most popular young stars this year, and this month marks the end of an era for Twihards with the final film, “Breaking Dawn – Part 2.” We’re sure the newest issues of Teen Vogue and Seventeen will be a favorite among readers for their cover stars, as well as the variety of content packed inside.

Each member of One Direction has their own cover for the latest issue of Teen Vogue, tapping into their enormous influence and providing collectable content, which young people crave. The Fantastic Five, as Teen Vogue calls them, continue to rise in popularity and they’re featured inside the mag with a spread on their massive success, how they got to where they are, the recent release of their second album, “Take Me Home,” and their upcoming world tour.

Speaking of fame,Teen Vogue also features Maude Apatow, the daughter of Judd Apatow and Leslie Mann who’s made a name for herself on Twitter. She’s proving to be a voice of tweens with her relatable and witty tweets and she’s wise beyond her years, as evident from the articles she writes for HelloGiggles. She also explains how she wants to be like Lena Dunham and Sofia Coppola, talented female writers who are role models for many girls as well. Maude is one to watch for providing relatable commentary in 140 characters or less.

When it comes to fashion, this month’s issue highlights how a new generation of girls are proud to wear the pants. They’re embracing pantsuits, showing their power, especially in the business world. They aren’t afraid to rock menswear-inspired styles and they seek to stand out.

But on a more serious note, Teen Vogue also addresses a problem among young people today; they don’t feel very informed about STDs. One in four 14-19 year old girls has a sexually transmitted disease and young people account for nearly half of new STDs each year. Teen Vogue discusses this topic in hopes of educating girls about the dangers of such diseases, and provides advice on how to get informed and stay safe. 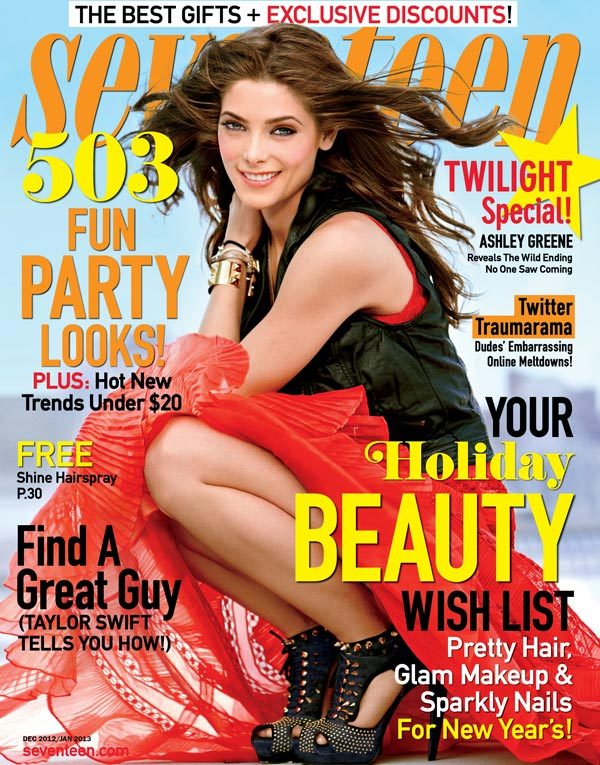 Seventeen magazine also covers a range of topics this month including the inevitable “Twilight Saga” and a spread with cover girl Ashley Greene. She’s become a breakout star of the series thanks to her character’s bubbly personality as well as her cool style and calm demeanor in real life. Ashley discusses what it’s been like being part of the franchise and having extremely loyal fans.

Ashley is in good company in this issue, which features a slew of other breakout stars who are popular for their style as well as their musical sounds. From Carly Rae Jepsen and Ellie Goulding to Rita Ora and Chery Lloyd, these girls are at the front of the fashion scene.

Celebrity blogger Jared Eng also weighs in on some of the most stylish stars, and Seventeen provides outfit suggestions for girls of all shapes and sizes. Moreover, the magazine strives to show real girls and includes readers’ photos of them showing off their own looks, along with what trends to try during the holiday season as modeled by real girls from their Style Council. Everything from tips on surviving the holiday party season and being confident to finding the perfect party dress is addressed in this issue. Beauty ideas are also in no short supply with lots of inspiration for nail art and hair bling to glittery eyes and fun lashes.

But in celebrating real girls, Seventeen discusses some heavy subjects too. As part of its ongoing Body Peace Project, the magazine profiles Lauren Scruggs, a 24-year-old who shares her story about how she lost her hand and eye in an accident, but her twin sister makes her feel stronger and confident. She’s come to realize that looks don’t define you; rather, your attitude, relationships, and happiness do.

Helping girls is seen in other ways throughout the issue as Seventeen offers advice on how to deal with emotional drama online, including digital meltdowns or rants. But most of all, the magazine has a feature on coming out to your friends and family. The media has made it easier with shows like “Glee” and “Pretty Little Liars,” which give young people inspiration to do the same. However, it’s still a huge worry for many who fear how others will react. The article highlights four girls who’ve accepted themselves, which has made them stronger, and hopefully will help other young girls too.