How Young Europeans Are Driving Entrepreneurship, in 4 Stats 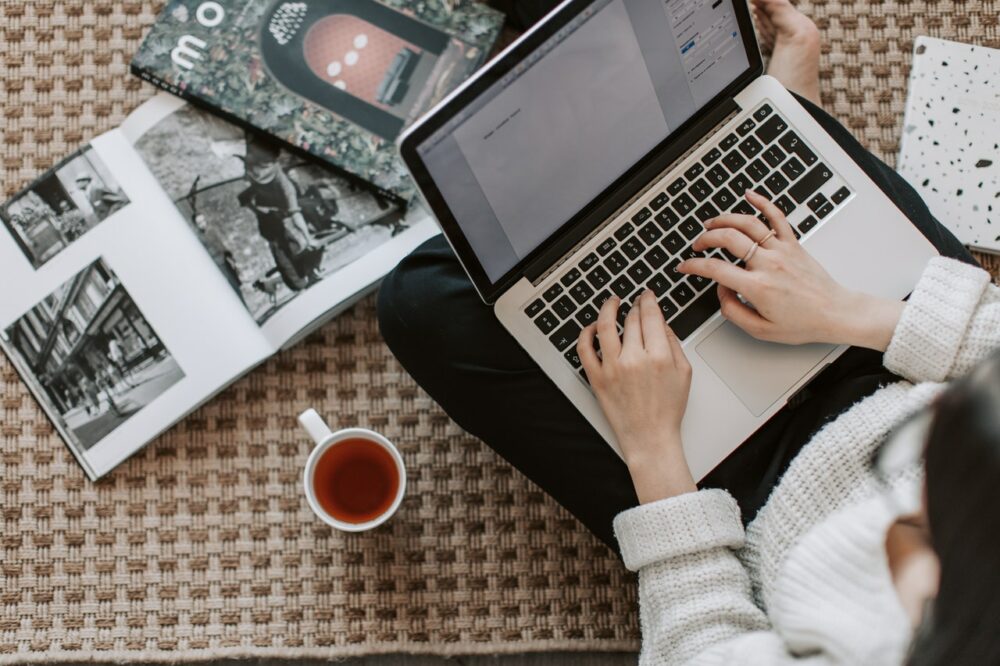 The Great Resignation prompted young Europeans to reassess their careers. Now, many are looking to start their own companies…

In YPulse’s recent What’s Next For Work trend report, we explored how the pandemic has provoked a monumental shift in young Europeans’ career aspirations and work lives. And one thing our research definitely shows is that The Great Resignation is very real—and that it’s happening in Western Europe, too. One in five European Millennials quit their job in the last year, and two in five 13-39-year-olds plan to quit their job in the next year. While the rest of the report dives into what’s driving young people to leave their jobs, as a quick recap we can tell you that as the pandemic forced young consumers to reassess their priorities in life, many decided that their high levels of burnout and lack of passion in their jobs weren’t worth it anymore. Now, employers are trying to woo workers with perks and salary increases as job vacancies rise, and the vast majority of young European employees say they feel confident about finding a new and better job, according to a study from recruitment firm Randstad U.K.

But while many young Europeans are planning to find a new 9-to-5, The Great Resignation is lending momentum to another career trend: entrepreneurship. While Europe’s innovation and startup culture have lagged behind the U.S.’s for some time, the pandemic has revived European Gen Z and Millennials’ zest for self-employed life. In fact, when we asked young Europeans to tell us their dream job, “Business owner / Entrepreneur” was their top answer (tied with “Doctor / Specialist / Surgeon”). This is especially true for Millennials, for whom “Entrepreneur” is the top dream job. But how many are actually planning to jump the corporate ship and start their own business? These 4 stats tell the story: 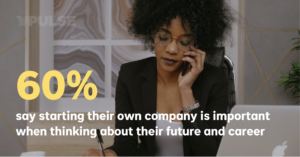 Three in five young Europeans say starting their own company is an important career priority.

When we asked 13-39-year-olds in Western Europe to tell us how important a range of priorities are to them when considering their career and future, 60% say that starting their own company is important to them. That means that for the majority of young Europeans, entrepreneurship is as important as, say, having a high salary, getting a sense of purpose from their work, and having a job that supports their mental health. Of course, it’s important to mention that over 90% of respondents list salary, purpose, and mental health as important priorities, and that even with 60%, “starting my own company” is at the bottom of the list of their biggest priorities. But while young European workers largely value stability in their careers, it’s still noteworthy that a healthy majority also value the risk of entrepreneurship. 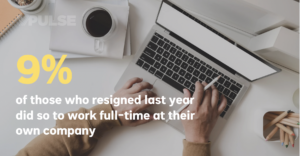 Nearly one in 10 who resigned in the last year did so to work full-time at their own company.

Of the 17% of young Europeans that resigned from their jobs during the pandemic, 9% did so to go all-in on their own venture. While again this is at the bottom of their list of reasons for resigning (“I got an offer to be paid more elsewhere” takes the top slot), it still signifies that a number of young workers are striking out on their own, which is no small feat. In fact, the number of new business applications in the U.K. grew by 30% in December 2020 compared to December 2019, according to the Financial Times, while that France registered 84,000 new businesses in October 2020—a 20% increase compared to October 2019—and Germany’s business registrations last year were also above 2019 levels. What’s more, our research shows that twice as many young females (12%) quit their jobs to start their own businesses as young males (6%). While that is encouraging, it’s likely because the pandemic was particularly detrimental to the careers of women—females are more likely than males to report an income decrease in the past year, and are much less likely to say their income has increased. Females are also less likely than males to have resigned from a job in the past year because they got offered a better salary elsewhere, spotlighting the lack of financial opportunities for female employees—and their reasoning for wanting to create their own stability. 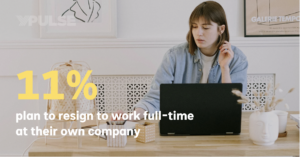 More than one in 10 plan to leave their job to work full-time at their own company.

Though young people’s work lives are starting to return to normal, The Great Resignation is far from over—and neither is the entrepreneurial surge. While nearly one in 10 young Europeans resigned to start their own company in the past year, just over one in 10 plan to do so in the next year, meaning that by the end of 2022, we could see as many as one in five young Europeans owning their own business—and are at least very likely to keep seeing new company registrations grow across the region. Again, women are more likely to report plans to leave their jobs to work full-time for themselves, and so are younger Millennials/older Gen Z: 15% of 18-24-year-olds plan on starting their own company in the next year compared to 10% of 25-39-year-olds, highlighting the young entrepreneurial spirit. 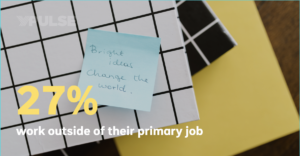 More than a quarter already have a side hustle.

While many side hustles never take center stage, more than a quarter of young Europeans say they already work outside their primary job, showcasing just how enterprising these generations already are. Half of those with side hustles say that they’re working outside their job because they need the money, but 34% say they’re doing it to pursue a passion. Again, that doesn’t mean that any of these enterprises will become bona fide companies, but it’s possible that some of them might. Gen Z females are also far more likely than any other demographic to say they have a side hustle: 39% currently work outside of their primary job. What’s more, their top reason for doing so is not money, but passion—53% say “it gives me a chance to pursue a passion” compared to 45% who say “I need the money.” As Gen Z and Millennials alike continue to reassess their priorities in life and work and put passion and purpose before financial stability, we’ll likely continue to see entrepreneurism grow in Western Europe.

North America
Taylor Swift is The Newest Celebrity Private Jet Controversy on The Viral List
TL;DR Taylor Swift has been called out for having the highest emissions of...
Western Europe
3 Things Brands Should Know About Young Europeans’ Fitness Routines
We know that health and fitness are important to Gen Z and Millennials. But after t...
North America
4 TikTok Influencers You Haven’t Heard of Yet, That Millions of Gen Z and Millennials Have
“I never expected this to blow up” is the new “thanks for one million subscribers” ...