Why The Great Resignation is Happening in Western Europe Too 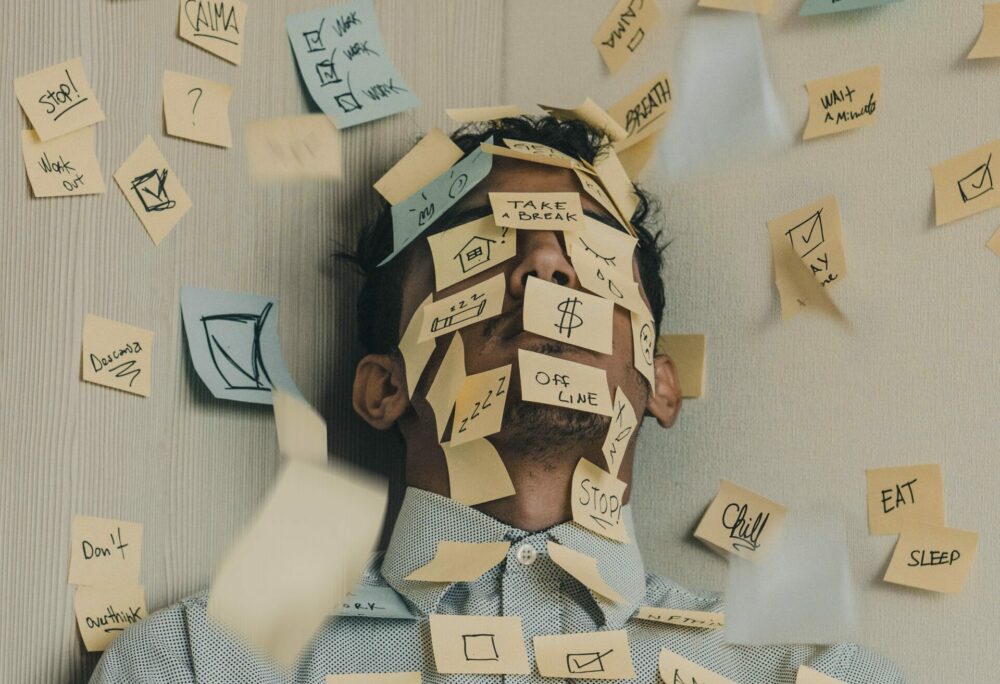 The pandemic fundamentally changed many things in young Europeans’ lives, but nothing more so than their career plans and paths—and not just because so many lost their jobs. Unemployment rates did rise from 6.3% across the E.U. in March 2020 to 7.7% at the height of the pandemic, but have since leveled off to pre-pandemic levels. Now, though, a new shift is happening: nearly two years into COVID, young consumers are quitting their jobs in record numbers, fueling the headline-grabbing Great Resignation, which is not just happening in the U.S. but the world over. A study from Microsoft recently found that 41% of the global workforce is considering leaving their job in the next year while the U.K. saw an all-time high of one million job vacancies this past July. In May, jobs site Reed.co.uk also had its highest number of monthly postings since 2008. Meanwhile, in Germany (Europe’s largest economy), more than a third of companies report that they are lacking skilled workers.

So what’s happening? YPulse recently dove into this massive shift in our What’s Next For Work trend report, which explores how the pandemic provoked young Europeans to re-examine not only their jobs, but their entire relationship to work. Our data shows that 20% of Millennials in Western Europe quit their jobs in the past year, and their reasons tell the story of why the Great Resignation is happening in Western Europe too: 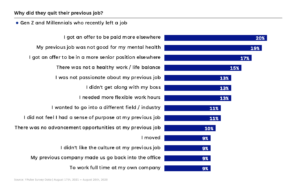 The top reason young Europeans left their job is a common one: more money. But mental health clocks in at a close second, and is actually the top reason for many young employees: 24% of 18-24-year-olds said they quit their job because it wasn’t good for their mental health, followed by a lack of healthy work / life balance (20%). Young people have been prioritizing their mental wellbeing for a while now, and the stress of the pandemic pushed this focus even further. Our State of Mind trend data explored the negative toll the pandemic has had on young people’s mental health, and work has been a major source of stress for them. Seventy-two percent of young Europeans say they’ve experienced work-related burnout (e.g. mentally & physically exhausted, overwhelmed, stressed out, etc.), and 50% say they’ve changed jobs or are interested in changing jobs to combat stress/anxiety. While work always carries a level of stress, the pandemic changed work demands across industries, which upped the stress level for many. Service jobs, for instance, grew more dangerous, demanding, and hostile while newly at-home desk jobs made work feel inescapable and decimated the idea of work / life balance.

In addition to added stress, the pandemic also made many people re-evaluate their life plans and truly decide what they want to do with their lives—and many decided it wasn’t what they were currently doing. Thirteen percent of young Europeans who quit their job in the past year said it was because they weren’t passionate about their previous job, and 11% said they didn’t feel a sense of purpose. Research from LinkedIn also found that 32% of young workers in the U.K. have reassessed what they desire in a job because of the pandemic, and 48% say they’re ready to reprioritize their careers, signifying that The Great Resignation isn’t over yet. In fact, our data shows that a full 40% of employed young Europeans plan to leave their current job in the next year, and 33% say that even though they like their job, they’d leave it if a better one came along. So what would influence them to leave their jobs now? We asked: 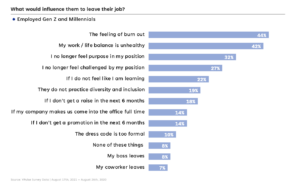