Gen Z & Millennials Trust YouTubers More Than Anyone Else

When it comes to the public figures that Gen Z and Millennials trust, one groups beats out all the rest…

Our recent celebrities and influencers behavioral report explores the power today’s celebrities have when reaching young consumers, revealing the reasons they have remained influential in marketing, and what types of partnerships brands should be making to most effectively reach young consumers. There are plenty of public figures that influence young consumers’ lives and purchases, and the list has only grown as fame has fragmented. We told you who Gen Z and Millennials’ favorite celebrities are, with music artists and online celebrities at the top of their lists. But online celebrities can mean influencers on any number of platforms, all of whom are sharing their opinions and wielding word-of-mouth power. But which of them do young consumers actually trust the most? To get a better understanding, we asked them directly “Which of the following public figures do they trust?” and found one group topped the ranking for both Gen Z and Millennials: 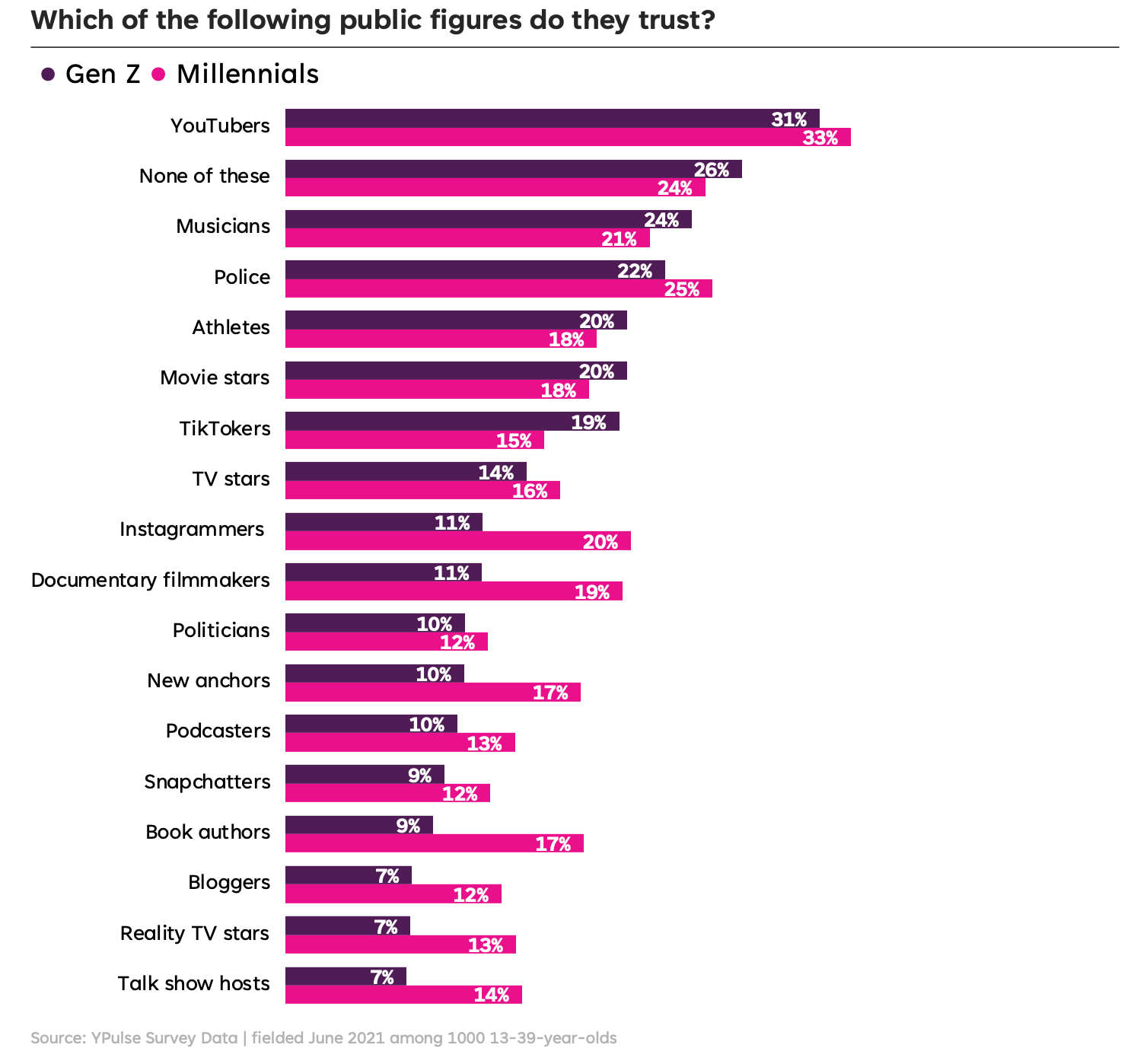 Both Gen Z and Millennials are most likely to say they trust YouTubers, with this group outranking Instagrammers, TikTokers, and Snapchatters as well as public figures like police, news anchors, and politicians. Young consumers—especially Gen Z—grew up on YouTube, and these creators have become more than faces on a screen to them. So, of course, Gen Z is more likely than Millennials to say they trust YouTubers. They’re also more likely to say they trust TikTokers compared to Millennials, which makes sense considering they’re much more likely than to be on TikTok. Our report found that 20% of 13-39-year-olds trust the advice that online celebrities give, with 25% of 13-20-year-olds saying they do compared to 18% of 21-39-year-olds—further highlighting Gen Z’s trust in influencers compared to the older generations. On the flip side, while Millennials are more likely to trust Instagrammers and Snapchatters than Gen Z, and they’re also more likely to trust traditional public figures like the police, news anchors, book authors, reality TV stars, and talk show hosts.

But with YouTubers and TikTokers increasingly becoming Gen Z’s most trusted public figures, does the number of followers a creator has impact how trusted they are? This knowledge is essential for brands to know when looking for influencers to collaborate with and they should know that, perhaps surprisingly, follower count actually isn’t all that important to young consumers: 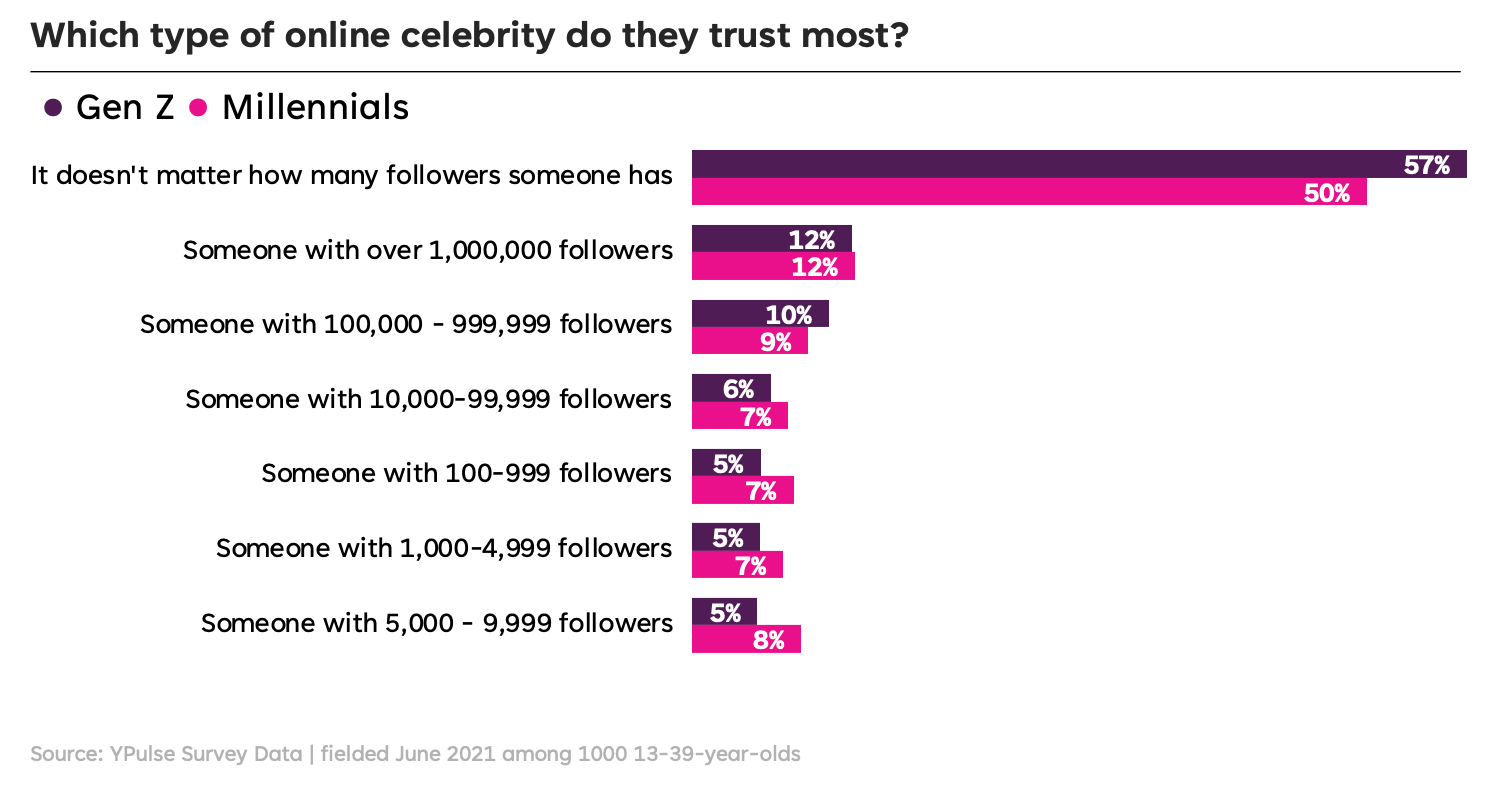 More than half of 13-39-year-olds say it doesn’t matter how many followers someone has, with Gen Z more likely to say so compared to Millennials,signifying that follower count isn’t the factor that’s creating trust between creators and young consumers. Instead, it’s the kind of content being shared, and the intimacy of social media and video content as mediums that are more likely making online celebs their most trusted public figures.

We told you that influencer marketing has changed significantly in the last year and as factors like authenticity and relatability become more important to young consumers, brands have started turning to nano and micro influencers. Influencer agency Influential saw a surge in campaigns focusing on “real people, real stories” during the pandemic, and reports that customers don’t want to hear about luxury influencers’ travel woes, but rather how influencers can relate to consumers.While brands’ first instinct might be to collaborate with someone with a massive following, marketing experts report that “nano-influencers have some of the most highly engaged followings, and can help brands with targeting.” Sway Group, an influencer marketing agency that manages nano-influencers with under 10,000 followers, has seen engagement rates reach up to 34% with nano-influencer’s sponsored content (to them, an engagement rate of 2% to 3% is considered “good.”) According to a Linqia report, 77% of brands want to work with micro-influencers (defined as “regular people” with between 5,000 to 100,000 followers)—and it seems like COVID has accelerated that trend. Brands like body-positive lingerie company Parade have been jumping on the micro influencer trend by using them to promote their undergarments—and their marketing seems to be working with young customers. The company reached $10 million in revenue last year after launching less than two years ago. Zyper, which matches brands with social media users, reports a 139% increase in “inbound leads” from fast fashion, luxury, and sportswear retailers. Our data indicates this interest is warranted, and young consumers are as likely to listen to and trust someone with 1000 followers as one with 100,000.