How BIPOC Students’ College Plans Differ from Their White/Non-Hispanic Peers’, In 3 Charts 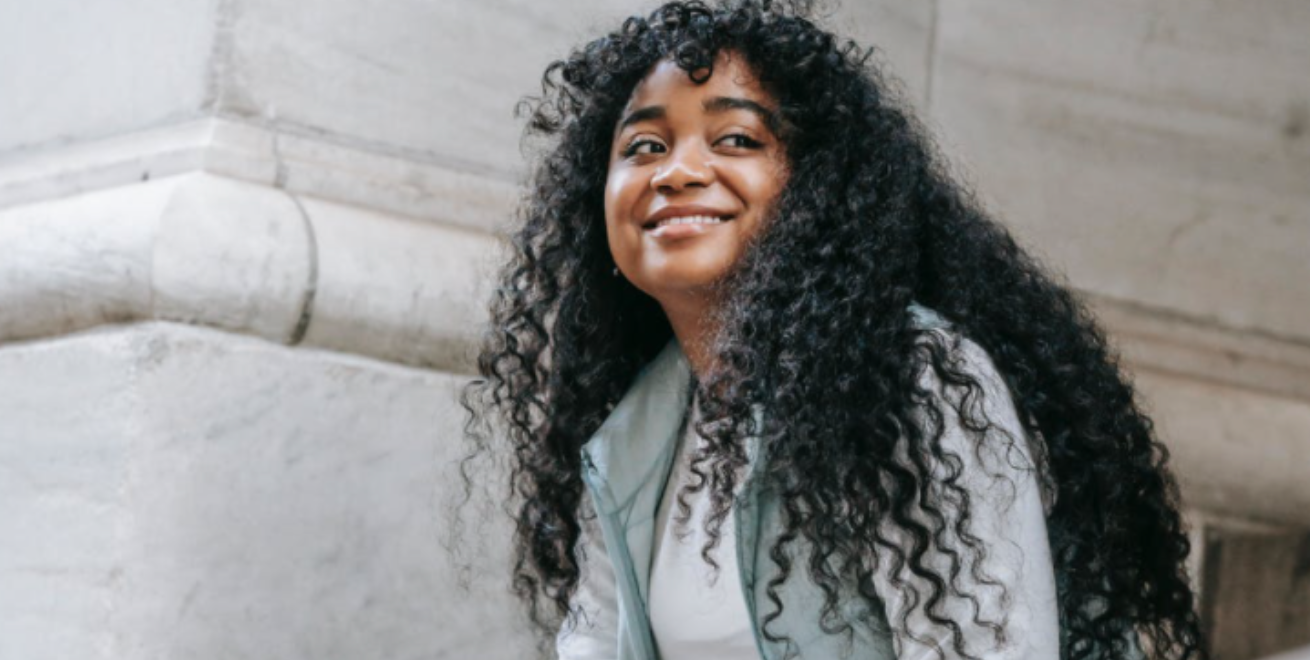 YPulse’s recent Education survey found that 82% of 13-39-year-olds plan to go to college, and the report explores how COVID has impacted young peoples’ plans for school and higher ed. And when comparing the college plans of BIPOC young people and their White/non-Hispanic peers, we found some key differences.

During the pandemic, BIPOC students’ education has been disproportionately affected : According to a report from Every Learner Everywhere and GlobalMindED that surveyed a group of 102 students from 47 colleges across 22 states, 100% of BIPOC respondents cited that they had two or more barriers hampering their remote learning. However, despite those challenges, YPulse data shows that BIPOC students’ are actually more likely to plan to go to college: 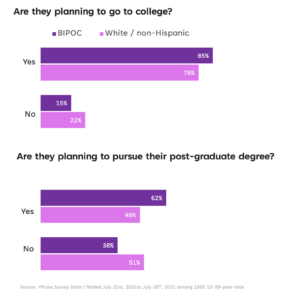 While a majority of middle school and high school students say they plan on attending college, the number is higher among BIPOC middle school and high school students compared to their White/non-Hispanic peers. Meanwhile, more BIPOC students who graduated from college are planning to pursue their postgraduate degree compared to White/non-Hispanic students who graduated from college. In general, BIPOC young people are more likely to see a college degree as fundamental to their success: they’re less likely than White/non-Hispanic young people to agree with the statement “I don’t need a college degree to be successful,” and slightly more likely to say they need a college or masters degree to be successful. Expanding their career options is by far the top reason BIPOC students say they want to attend college. Brands and institutions should understand that BIPOC young people are more likely to have college and higher ed ambitions, and could find ways to help them achieve these.

But of course, young people’s financial situations play an important role in whether they can attend college, and YPulse research shows that BIPOC students who are interested in attending college have a much lower yearly tuition maximum they’re willing to pay than White/non-Hispanic students. Financial inequalities are clearly on display here,  and are making scholarships key to BIPOC young people achieving their college goals: 48% of BIPOC college students say they are paying for college with scholarships compared to 29% their White/non-Hispanic counterparts, while 40% of BIPOC middle school and high school students say they will be paying for college with financial aid compared to 30% of White/non-Hispanic students. Meanwhile, 50% of White / Non-Hispanic students say their parents will be paying for their college education compared to 34% of BIPOC students.

But BIPOC young people are also consider different things when choosing their colleges: 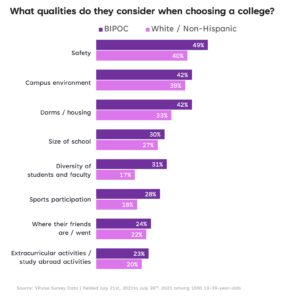 Safety, campus environment, and dorms / housing are some of the top qualities BIPOC students consider when choosing a college, and the former two qualities go hand-in-hand. BIPOC young people are looking for spaces and environments where they can feel comfortable and protected. Young people believe that racism and dsicrimination is still one of the top problems their generations face, and with the surge of hate crimes against Asian Americans, “heightened levels” of discrimination against the Black LGBTQ community, and the overall racial inequity among Black Americans, of course many of BIPOC students are considering safety when they think about their future college. Already, apps like The Lavender Book have been created as a way to help LGBTQ+ people of color find spaces, and while it isn’t specific to only college students, similar resources could be beneficial for BIPOC students who want to feel safer at their schools and on campus. During the pandemic, students of color had to deal with food and housing insecurity, loneliness, grief, and “increased racist violence and harassment has introduced another layer of challenges to contend with.” According to experts, because the climates on campus have changed after a year of lockdowns and virtual learning, there needs to be “a sense of collective responsibility on campuses is an essential component to ensuring colleges are safe as the new academic year begins.”

Finally, there are also differences in what  BIPOC and White/non-Hispanic students want to study in college once they get there: 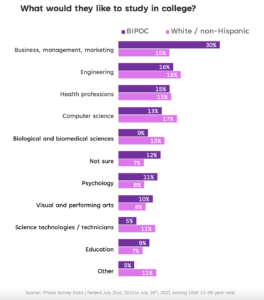 When looking at the top things young people want to study in college, there are some clear differences between these groups. The biggest is at the top: 30%of BIPOC students interested in college say they would like to study business, management, marketing, and related support services compared to only 15% of their White / non-Hispanic counterparts. This could be in part because of BIPOC young people’s entrepreneurial dreams: YPulse’s Life Plans, Rewritten trend research found that 70% of Black 13-39-year-olds, 68% of Asian 13-39-year-olds, and 66% of Hispanic 13-39-year-olds aspire to be entrepreneurs compared to 61% of White/non-Hispanic 13-39-year-olds. Companies like Amazon have recently been hosting conferences and summits dedicated to emerging and established BIPOC entrepreneurs, and more brands could be supporting these efforts and ambitions.

But there are some gaps here that could be due to a comparative lack of encouragement when it comes to BIPOC young peoples’ interests and talents. BIPOC young people are less likely to say they’re interested in studying computer science, biological or biomedical science, and science technologies. In short, STEM is attracting less interest among BIPOC young people, potentially because they are not being give access to the resources to learn about these subjects at younger ages.