Every year, we ask Gen Z and Millennials what companies they want to work for and find that some of their favorite brands are often some of their top dream employers as well. But we’ve also found that the companies and industries that they want to work for have in the past revealed some differences between these generations. In 2021, we found that both are still true—and that the pandemic has had some impact on what career paths they might want to take, and shifted their priorities as well.

YPulse’s recent employment and career goals report asked 13-39-year-olds: “If you could work for any company in the world, what company would you most like to work for?” These were their top responses: 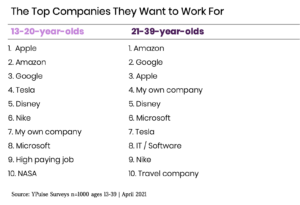 As they did in 2020, Apple, Google, and Amazon are the top companies that Gen Z and Millennials both want to work for. We’ve long known that tech is the most alluring industry for these generations, who see stability and a future, as well as a chance to flex their creative muscles and be a part of some of their favorite brands and products, in the industry.

Looking specifically at Gen Z’s responses, there are some notable shifts from last year. Tesla, which had previously dropped out of their top 10 rankings made an appearance on the list this year, taking the fourth spot—with the company’s founder Elon Musk making the list of individuals they feel define their generation, the impact of this brand is clear. While the younger generation does share many of the same dream employers as Millennials, for the first time this year the general response “a high paying job” made their top 10 list. In other words, they’re caring less about where they work, and more about guaranteed security of a bigger paycheck. YPulse’s employment behavioral report explored how for both Gen Z and Millennials, salaries are now top of mind and passion has taken a back seat when it comes to careers. We found that 44% of Gen Z would rather earn a lot of money and not be very passionate about the work than be very passionate and not earn a lot of money—a 16 point increase from 2020. Clearly for Gen Z, making money is a priority, and they’ll be looking for salaries that can make them feel safe if another economic crisis comes along.

Meanwhile, we saw some differences in Millennials’ dream employer ranking as well. Amazon has made its way to the top of Millennials’ list this year—moving up three spots from 2020. But while many of the companies on their ranking remained the same as last year, a few new ones: the general response “IT company” or “information technology” appeared on their top ten for the first time, along with “travel company.” The latter is potentially an indication that their desire to travel has been amplified by the pandemic to the extent that that it’s now influencing their dream jobs.

There is another difference for both generations when comparing their responses to 2020 and previous years: “hospital / healthcare” has fallen off the top 10 ranking for both generations. After the pandemic, and the conditions and dangers that healthcare workers have been working through, this career path is less desired than ever before.

That said, when we look at the more broad categories of what industries they want to work for, healthcare does still make the top ten for both groups: 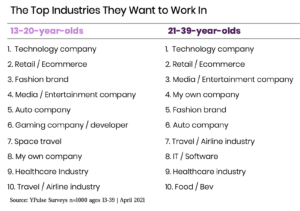 Just like last year, technology companies topped both Gen Z and Millennials’ lists this year, and Retail / Ecommerce tied at the number two spot for both generations. But while there are many commonalities between the rankings for both generations, once again Gen Z was more likely to name a gaming company / developer as their dream employer than Millennials, once again demonstrating how important gaming is to the younger generation. Space travel also made Gen Z’s top ten list, an industry category which dropped out of Millennials’ list. NASA was once again one of the top companies that Gen Z wants to work for, and SpaceX was actually 11th on their ranking.

Overall technology companies and the brands that create the products young people love are most likely to be the brands they want to work for. But the pandemic has shifted their priorities somewhat, and those looking to attract next generation talent should understand that salary might be more of a deciding factor for them going forward.

North America
Young People Are Seriously Done With Facebook on The Viral List
TL;DR Facebook is in hot water with already waning young users for supplyi...
North America
Gen Z and Millennials Are Using QR Codes for More Than You Think
QR codes are the easiest way to deliver young consumers a link, and they’re ready ...
Western Europe
4 Brands Reaching Young Europeans With Mental Health Marketing
Young consumers are redefining what wellness is, and they want brands to get involv...