How much are young sports fans actually betting, what kind of betting are they doing, and what’s in it for them? We’re breaking it all down…

YPulse’s Scouting Next Gen Sports Fans trend report found that 63% of 13-39-year-olds consider themselves sports fans—but how these sports fans behave and engage with the leagues they’re following diverges significantly from generations before them. But YPulse’s research shows that (despite their reputation for being participation trophy collectors) it’s competition first and foremost that’s drawing these generations of sports fans into the action. We also found that they’re looking for ways to feel more personally invested in that competition. For some, that investment is both literal and figurative, as they intensify the action on the field with their own betting and gambling (which is currently legal in more than a dozen states). 2020 was “projected” to be a huge year for sports betting, but despite some lost momentum, the industry has still managed to surge ahead—and  we have the data on how many young people are actually participating.

YPulse’s recent sports and athletics survey and Scouting Next Gen Sports Fan trend data both explored the role of sports and sports fandom in young consumers’ lives. And we also dug into how much sports gambling is catching young people’s attention. Here are three stats breaking down their sports betting behavior: 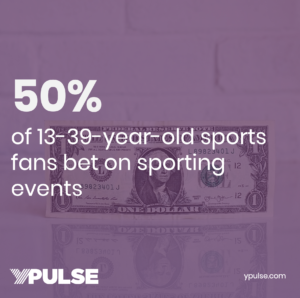 Half of young sports fans are betting on sports.

YPulse found that 50% of 13-39-year-old sports fans say they bet on sports in some capacity—and that number is significantly higher among Millennials. Fifty-five percent of 20-38-year-old sports fans say they bet on sporting events compared to only 33% of 13-19-year-old sports fans. In most states and on sportsbook apps, the legal age for sports betting is 18-years-old, so the smaller number among Gen Z is somewhat expected. But at the same time, YPulse found that Millennials are more likely to consider themselves sports fans than Gen Z, and are more engaged and invested in their sports fandom than the younger generation as well. In particular, Millennial males, who are the most likely to consider themselves sports fans, are most likely to be betting on sports, with 64% of Millennial male sports fans reporting they bet on sports in some capacity. But for those who are betting, from both generations, the intensification of the competition is likely a major draw. The number one reason young sports fans say they’re fans is because they’re excited by the competition. And among those young sports fans who participate in fantasy leagues, the top reason for participating is “To be personally involved in the competition of the game.” Our Scouting Next Gen Sports Fans trend report even found that 24% of 13-39-year-olds say they’re sports fans because they enjoy betting on the outcomes. 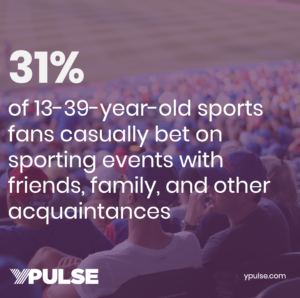 Casual betting with friends and family is the most popular form of sports gambling among young consumers.
Looking at the kind of gambling that young sports fans are participating in, casual betting with people they know is the most common. A third of young sports fans casually bet on games with friends, family, and acquaintances, compared to 20% who bet on a sportsbook app, and only 17% who they bet on sporting events through a bookmarker (bookie.)  Among the Sportsbook Apps that young sports fans are using, the most popular was FOX Bet, with 45% of 13-39-year-old sports fans saying they use it followed by FanDuel (43%) and DraftKings (41%). Again, Millennial males are most likely to be participating in betting across the board, regardless of the type, with 39% casually betting, 27% using a sportsbook app, and 26% betting with a bookie. They’re also betting larger amounts than other groups, with 57% of Millennial males who bet on sports saying they bet more than $100 in a given month. 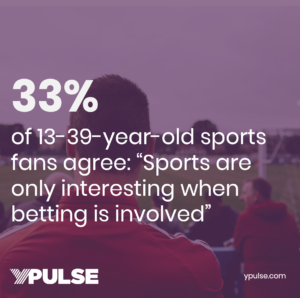 Western Europe
Are Young Europeans Into the Mystical and Magical?
From tarot to crystals to astrology, young Europeans are turning to the supernatura...
North America
How P&G Is Supporting Gen Z Women in STEM
The entrepreneurial arm of this consumer goods brand teamed up with Her Campus Medi...
North America
The Internet Can’t Get Enough of the Met Gala on The Viral List
TL;DR: Fans can’t stop talking about their favorite (and not-so-favorite) ...