Are Gen Z and Millennials part of social media groups? We’re breaking down their activity in two charts…

When Millennials first started to use social media, the medium was all about sharing something with as many people as possible. Broadcasting your life to a huge group of friends and strangers was novel, and exciting—but over time, the cons of oversharing to the masses became obvious. Social media has over Gen Z and Millennials’ lifetimes evolved into a mix of the public and the private, and in 2018 Mark Zuckerberg himself declared “we already see that private messaging, ephemeral stories, and small groups are by far the fastest growing areas of online communication.” But in the years since, a lot has changed in the social media landscape, including the rise of new platforms, and the growth of more niche spaces. So, are social media groups still an important part of social media for Gen Z and Millennials?

YPulse’s Social Media Deep Dive trend report dug (yes, deep) into the ways that young consumers are using different social media platforms, what they’re getting out of them, and how brands can reach them there. We also asked them, “Are you part of social media groups?” and found their responses varied significantly by generation: 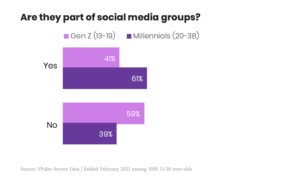 The difference could hinge on the platforms they’re spending their time on. Facebook has made groups a huge part of their network, prioritizing groups in the wake of the 2016 election—and the reality is that Millennials are far more likely to be using Facebook than Gen Z. Our Social Media Deep Dive report showed 75% of Millennials are using the platform, compared to 32% of Gen Z. We also found that Facebook users are the most likely to say that they are part of a social media group, when compared to users of other platforms. Facebook is also one of the most popular social platforms for Millennial parents as well, with 84% of them saying they use the platform—and they’re also more likely than non-parents to say they’re part of a social media group. Trading childrearing advice in groups has become a norm for this generation of parents—and it can be a boon for brands. For instance, word-of-mouth for a Nugget play couch making its way around parental Facebook groups helped the product to sell out during quarantines.

But while Millennials are certainly more likely than Gen Z to be a part of a social media group, the reality is that a huge number of both generations say that they are. And when it comes to their participation, the biggest benefit is not creating and sharing content with other, but instead having access to the content that speaks to their interests: 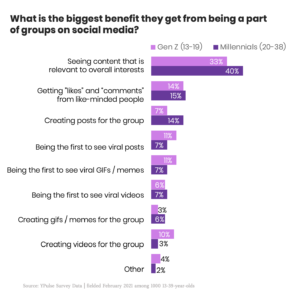 Access to exclusive content, and having an outlet for creativity are certainly benefits of being part of a social media group for young consumers, but their responses show the biggest is seeing content that is relevant to their interests. Those shared interests also provide a sense of community that young people might not be getting offline as much as they once were. We recently told you about the top places Gen Z and Millennials find community, and their top responses included “on a social media platform” and “social media group.”

Clearly, social media groups are still a vital part of platforms’ appeal for young consumers. For brands, these groups can be a way to foster the community around their own products and media. Everyone from podcast lovers to car enthusiasts, sci-fi fans, and other niche interests, have formed groups to bond over a shared love—and the desire to see content specific to their unique interests is driving young consumers participation.