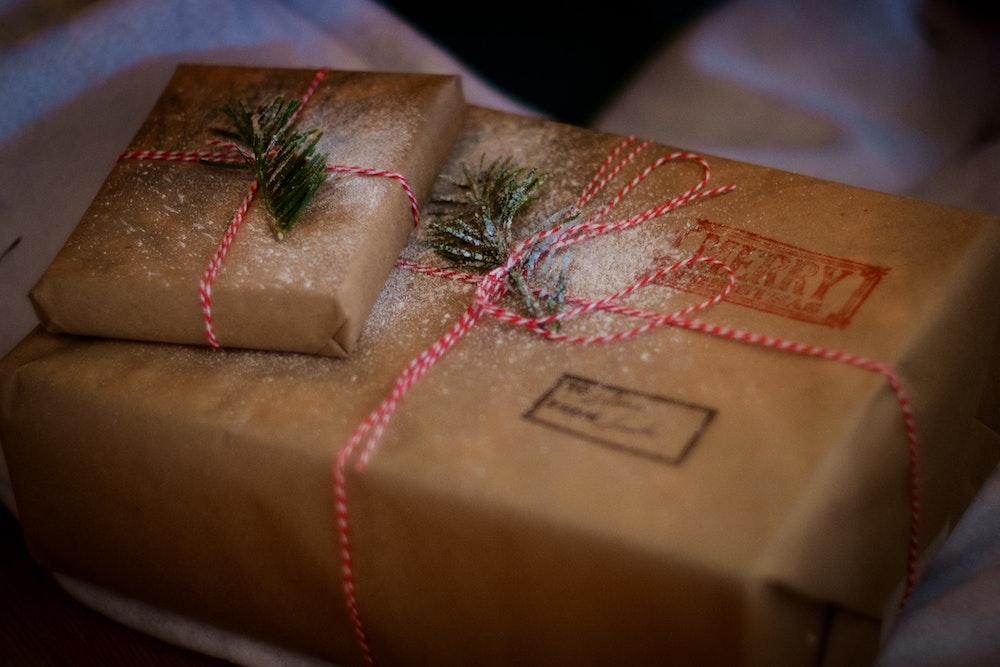 We got an early read on how young shoppers are feeling about holiday shopping, and Black Friday—and the data shows brands need to rethink their tactics this year…

It is obvious that the holiday season—as with everything in 2020—is going to look very different this year. But what is less clear is exactly how it’s going to play out. Of course, brands rely on holiday retail revenue, which make up a significant portion of their annual sales, and are facing an uncertain future. Many retailers are preparing for increased ecommerce traffic and predicting difficulties in keeping up with shipping. But there are plenty of question marks around how comfortable shoppers will be visiting stores, how they feel about key events like Black Friday, and how much they’re willing to spend. According to the president and chief brand officer of Nordstrom, “The wild card is going to be the traffic we get through physical stores, given the sensibility of customers around COVID, And no one’s got a crystal ball on that.”

Well, while we may not have a crystal ball, we do have the ability to ask young consumers how they’re feeling about holiday shopping and Black Friday, the traditional kick-off of the season, right now. We used YPulse’s on-demand research tool PULSE to ask 16-44-year-olds about their shopping plans, Black Friday, Cyber Monday, and more. Of course, in an incredibly unpredictable year, it can be difficult for consumers to make plans for even the near future. But that said, their responses show that Black Friday and holiday shopping will indeed be different this year, and brands are right to rethink their tactics.

Let’s start with spending. YPulse’s Retail’s New Reality trend report found that back in June young consumers were worried about their holiday shopping budgets. Today, we checked in on their plans and found that things might be looking a bit brighter:

Currently over half of 16-44-year-olds say that they plan to spend the same or more than they did in 2019. Specifically, 43% told us they plan to spend the same amount on gifts as they did last year, and 12% plan to spend more. Millennial parents are even more likely to say they’ll be increasing their holiday budgets this year, with 16% saying they think they’ll spend more. Some are predicting that toy sales will be more focused on bigger, more expensive items that will entertain kids longer. But on top of potential shifts in the types of gifts they may buy, YPulse’s early holiday shopping research found the majority of Millennial parents agreed with the statement, “I will want to buy my kids anything they want for the holidays to make up for a hard year.” Emotions are clearly going to be high when it comes to holiday shopping this year, and brands should be thinking about how they can help.

By the way, don’t be alarmed by the 12% of young consumers who say they won’t be buying gifts this year. This lines up with YPulse’s 2019 holiday spending data, which showed that 13% of 18-39-year-olds didn’t do any holiday shopping last year. It’s actually a positive sign that just as many young consumers plan to holiday shop in 2020 as did last year. But of course we can’t ignore the fact that roughly a third of young shoppers say that they think they will spend less than they did in 2019. It’s hardly a surprise when financial situations have become unstable for many. Making buy-now-pay-later and installment payment options clear and easy to use could be essential for reaching Gen Z and Millennial shoppers, who will likely want to buy gifts (and treats for themselves) to make up for a hard year as well, but might need more payment solutions to do so. For brands, another clear takeaway here is that deals and discounts will likely be more important than ever for 2020 holiday shopping.

So what about the biggest celebration of holiday shopping deals, Black Friday? In 2019, PYMNTS.com reported that Millennials spent more than any other generation for Black Friday, and YPulse data shows that, 78% of young consumers shopped on Black Friday last year. So understanding how Gen Z and Millennials will be approaching the shopping event, and how they want brands to be talking about it, is clearly important. We used PULSE to get real-time responses from young consumers on Black Friday, and their answers make it clear that retailers should indeed be taking a new approach this year: 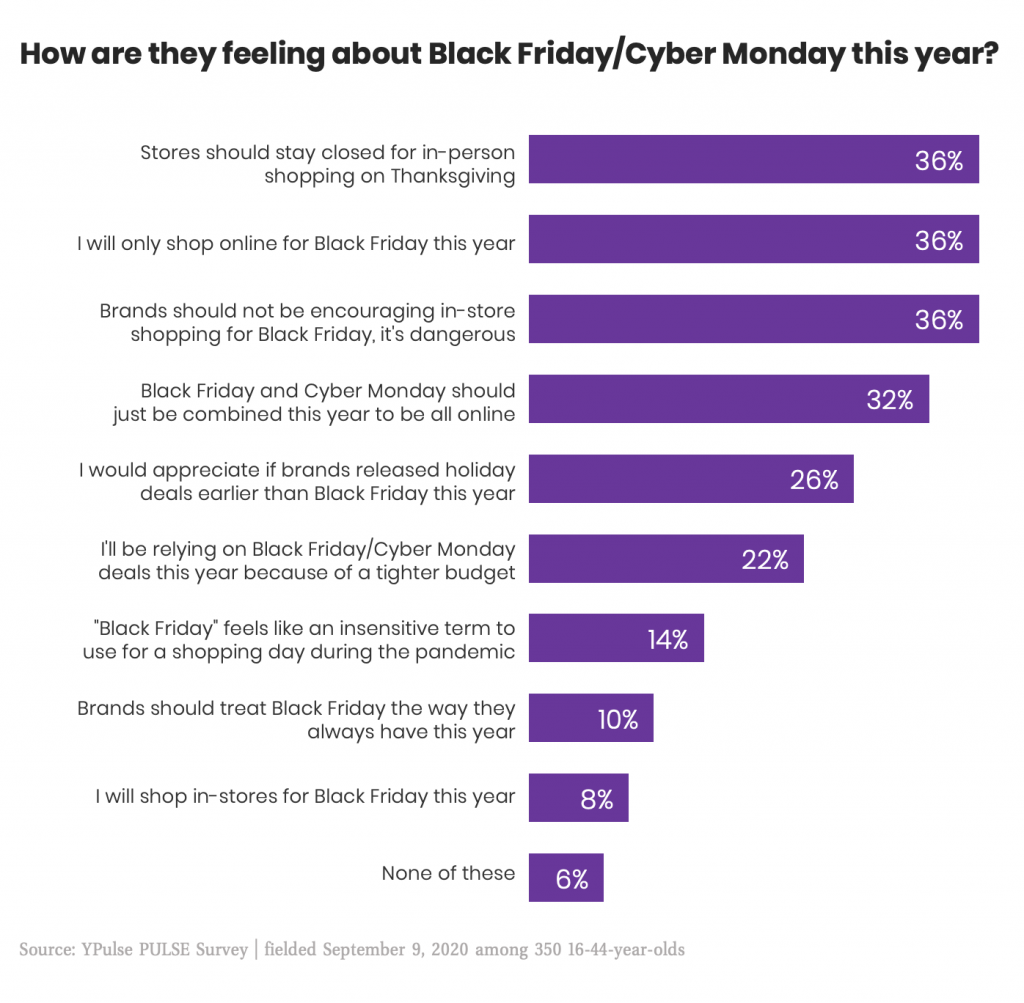 There’s a lot to unpack here, but we’ll first call out that today only 10% of 16-44-year-olds say that brands should treat Black Friday the way they always have this year. The shopping event, and holiday shopping in general, need to be handled with care.

The most clear direction we can see is that young consumers are far more likely to shop online for Black Friday in 2020, with 8% saying they will shop in-store, compared to 36% who say they will only shop online. Black Friday will need to be an ecommerce event for this year. But in reality, this is a continuation of the growing digitization of Black Friday shopping, which was already becoming increasingly digital. In 2019, shoppers spent a “record” $7.4 billion online for Black Friday and Adobe Analytics reported in-store shopping dropped 6%, while online sales broke records at $7.4 billion, and mobile sales increased 21% over 2018. YPulse data shows that in 2019, ecommerce was already eclipsing brick-and-mortar visits for young consumers: among those who shopped on Black Friday, 35% shopped online, while 22% shopped in-store, and 21% did both. Cyber Monday was nearly as popular among Gen Z and Millennials, with 66% shopping on the retail holiday. So while brands may be preparing for unprecedented online shopping for this holiday season, the domination of ecommerce for the holidays is likely just an acceleration of a trend that was already in motion.

But brands should also be prepared to adjust their messaging around Black Friday this year. While the majority of young consumers don’t think they actual term Black Friday is off-limits (14% believe it feels insensitive during the pandemic), they do want brands to put consumers’ safety first. Many young consumers are feeling that stores should not be pushing for in-store visits, with 36% saying that brands should not encourage in-store shopping because it’s dangerous and 36% saying that stores should stay closed for in-person shopping on Thanksgiving. Many brands, including Walmart, Target, and Best Buy, have already announced Thanksgiving closures for this year, and this is clearly the right move in young consumers’ minds. A third of young consumers even tell us that Black Friday and Cyber Monday should just be combined this year to be an online shopping weekend—retailers should consider these kinds of marketing adjustments. Brands should also keep in mind that impulse purchases drove Gen Z and Millennials’ Black Friday spending last year, and in 2020 encouraging those impulse buys needs to be moved online.

The timing of messaging should also be shifted, with a quarter of young consumers saying they would appreciate if brands released holiday deals earlier than Black Friday this year. Many retailers are planning to push up their holiday discounts, with Home Depot adapting to create “two months of Black Friday deals” and Target explicitly saying on their site that their “biggest holiday deals will be available earlier than ever, so you can shop safely and conveniently without worrying about missing out on deals that usually come later in the season.”

Nearly a quarter of young shoppers told YPulse today that they will be relying on Black Friday and Cyber Monday deals because of tighter budgets this year—giving them those deals earlier is in the best interest of both consumers and the retailers who need them. Another reason to push deals up? Amazon delayed their infamous Prime Day, and rumor has it the event could be in October this year. This could disrupt the holiday shopping landscape for other retailers—in fact, when asked about Black Friday today one respondent told us they’re “More interested in Prime Day than anything else.”