How Many Young Consumers Are Actually Using Amazon Prime? 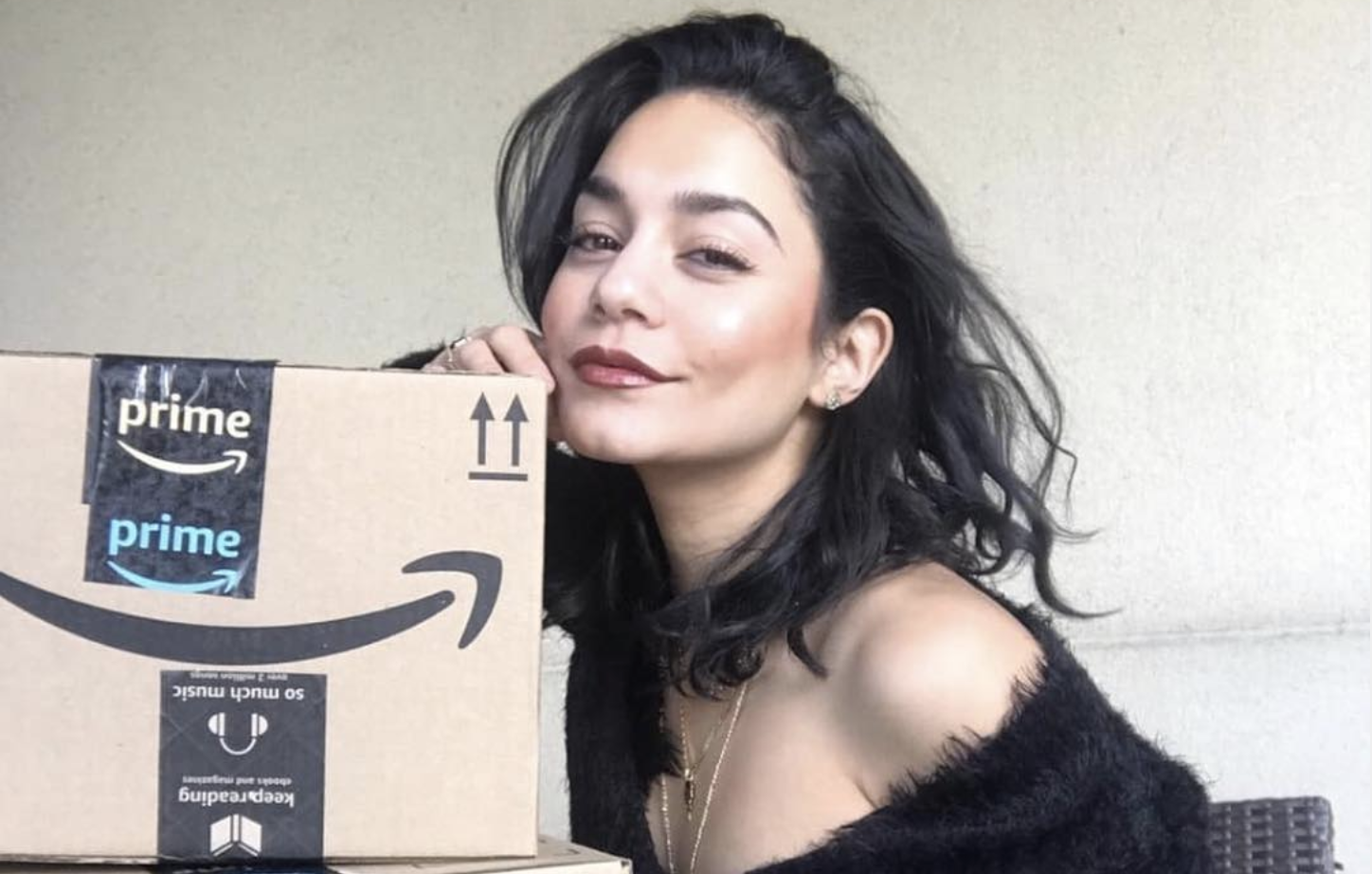 Amazon Prime has exploded, recently reaching 150 million subscribers worldwide. How many of them are young consumers, and is the next generation getting hooked on Prime?

Amazon recently announced that they surpassed 150 million paid Prime subscribers worldwide—a rare metric share by the brand and a huge number of consumers. The company credits their fast free shipping and Prime Video content for the impressive numbers—which have increased significantly since their last report of 100 million members in April 2018. But as they’re notoriously tight-lipped about sharing these kinds of stats, there is little information about exactly who these subscribers are. Luckily, we keep tabs on exactly how many young consumers report paying for Amazon Prime.

According to YPulse’s data, in December of 2018, 46% of 13-36-year-olds were paying for a Amazon Prime membership—roughly a year later, in January of 2020, that number has increased to 51% of 13-39-year-olds, tipping it just over half of young consumers who are now Amazon Prime users. But are reports that “most” Millennials are subscribed to the service over-exaggerated or right on the money? Here’s how many young consumers of all age groups are actually using Amazon Prime, according to our most recent survey asking if they pay for the service: 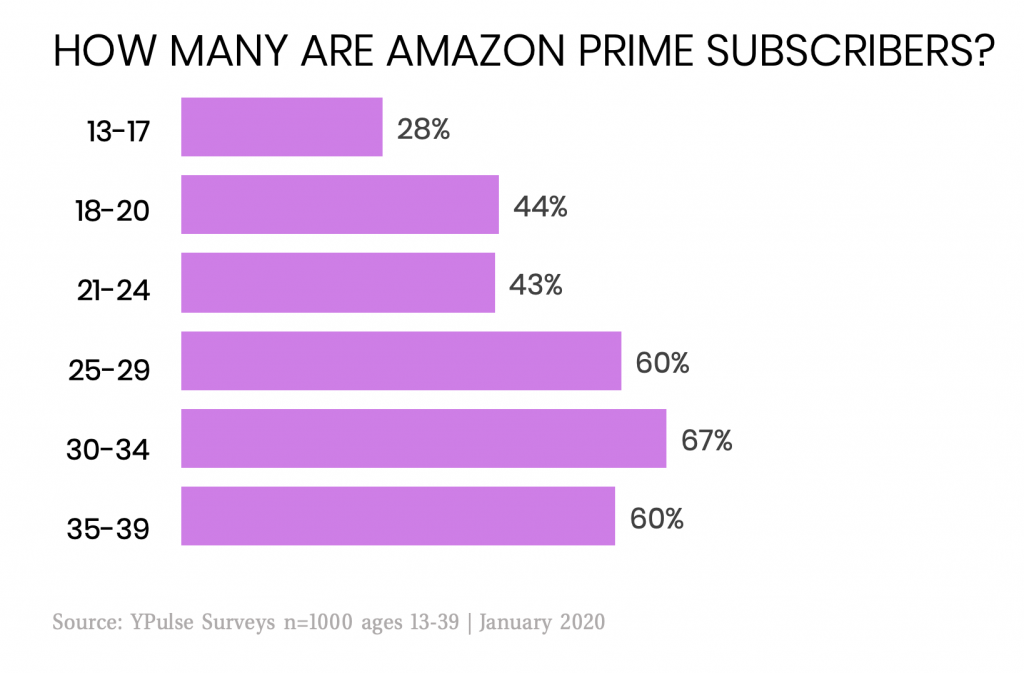 According to our YPulse Media Consumption survey, 57% of 19-37-year-olds are currently Amazon Prime subscribers, so it’s true that most Millennials are using Prime. We’ve seen their strong affinity for Amazon for some time, and the brand is currently has the second highest Yscore among Millennials in our youth brand tracker, ranking number one across several dimensions including being the top brand that they’ll use/buy from. Our data shows that Millennial males and females are almost equally likely to be Amazon Prime subscribers—and qualitatively we’ve seen that Millennial men, who haven’t been culturally trained to see shopping as entertainment, are flocking to Amazon for the convenience of buying what they want without ever stepping into a store.

We see a clear increase in Amazon Prime subscribers as young consumers age up, with those reporting themselves as Prime subscribers jumping significantly at 25-29-years-old, and 30-34-year-olds currently the most likely group to subscribe.

While Gen Z is far less likely to subscribe to Prime (given their age and relative lack of financial independence) over a quarter report subscribing to Prime—and our youth brand tracker shows that 13-18-year-olds already have affinity for the brand: Amazon ranks as the number four brand they will use/buy, and is fourth in the ranking of brands they’ve heard positive things about. According to Business Insider, teens already love to browse Amazon—even when they’re not buying anything: 46% of 13-21-year-olds say Amazon is one of their most-visited sites, and 19% of those don’t typically make any purchases. As this next generation moves into their spending power and away from cash allowances, Amazon will reap the rewards of their early browsing—and they’ve been incredibly strategic about targeting consumers young, especially on college campuses. The tactic is paying off, as we see college students are an especially likely group to report paying for Prime: 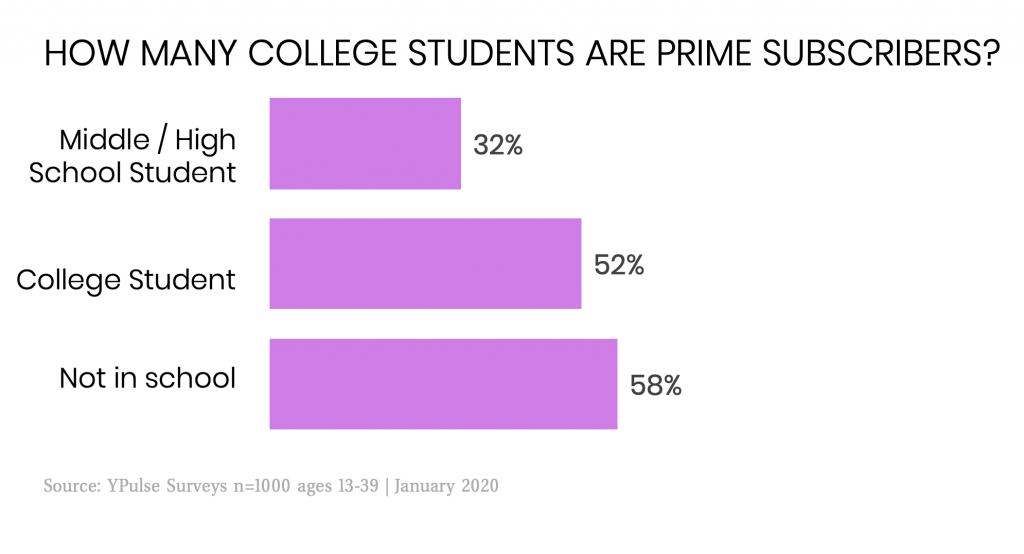 Amazon Prime Student is clearly doing its job: over half of college students report paying for Amazon Prime. With a six-month free trial and a 50% discount on the $119 yearly subscription cost of Prime once the trial ends, Amazon is luring in college students who are relying on the site for supplies, books, and anything else they want delivered fast (even same day). The tech giant provides deals on used textbooks that campus bookstores are often unable to compete with, and according to Campus Technology, 58% of students have bought at least one textbook through Amazon. But Prime Student isn’t the brand’s only temptation for college students. Last year, Amazon targeted the group with an online store dedicated to college shopping, promoting dorm room items curated by influencers and available for same-day pick up at stores near campuses. Textbooks were available to buy or rent (for big savings), and students could also trade in books, video games, devices, and other items in exchange for Amazon gift cards—which would, in turn, get them even more accustomed to shopping on the site.

Amazon has also set up a physical presence across college campuses to hook students as Prime customers as early as possible, with Amazon Locker pickup locations for free same-day deliveries in place at colleges across the U.S. At these shipping hubs, Amazon Prime Student users can pick up online orders or drop off items for return with help from an assigned employee. The convenient lockers are often next to bookstores and open for longer hours than the campus mailroom. All of these efforts are aimed at getting students hooked on Prime—and according to our data, they are.