Every week, YPulse’s continuous youth brand tracker asks young consumers to assess their feelings on over 400 brands—so we’re continuously monitoring the ups and downs of their affinity for the biggest brands targeting Gen Z and Millennials. Questions about whether a brand is trustworthy, supports causes, is recommended to others, and has a bright future are specific examples of the diagnostics we use to determine a brands’ success among young consumers, with the Yscore aggregating all of these measures. When we look at the brands with the highest scores among young consumers, it’s clear that constant innovation pays off. This doesn’t always mean endless reinvention—a classic product is still appreciated—but instead a willingness to experiment with new products, marketing, offerings, and even delivery systems while maintaining the quality of the original.

This lesson becomes all the more clear when looking at Burger King’s recent success with Gen Z and Millennials. This August, the fast food chain’s youth brand tracker scores began to majorly spike among 13-37-year-olds, with their Yscore leaping from around 18 points at the end of July to almost 28 points at the end of August—an almost 50% increase. What did the brand do to boost their affinity so much? The spike in their scores directly follows the launch of the Impossible Whopper—the meatless burger—in their stores nationwide: 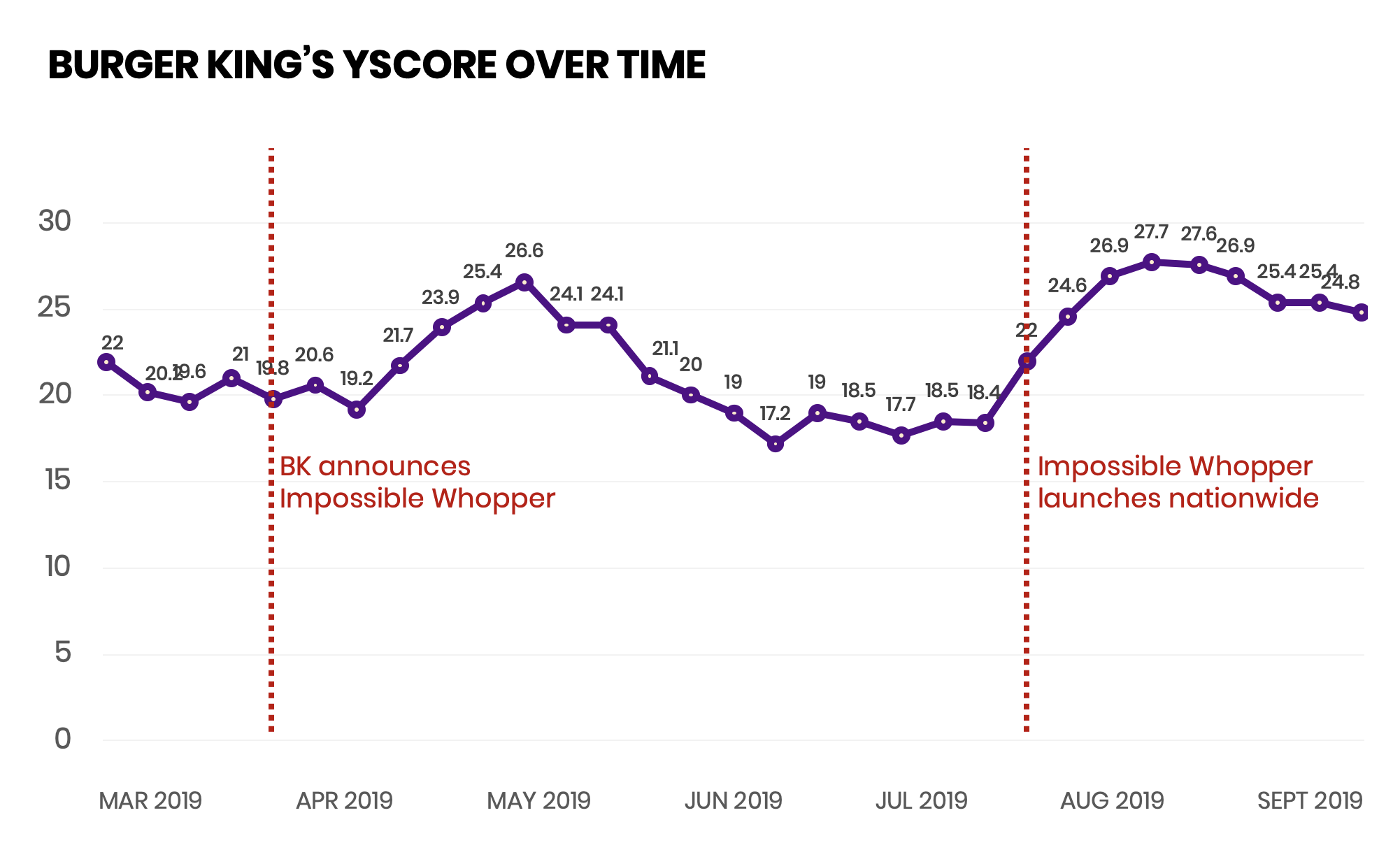 Burger King first announced that their iconic Whopper was going vegan on April 1st, introducing the daring menu item at store just in the St. Louis area. The timing won them extra buzz as people speculated whether it was all an elaborate April Fool’s joke—but the plant-based burger is real. The fast food chain teamed up with vegan pioneer Impossible Foods to create the Impossible Whopper, signaling the biggest breakthrough for fake meat into the restaurant industry at that point. After that April announcement, we saw Burger King’s scores climb, then fall back to normal, as the buzz around the small launch died down.

But though they started with a small test, by the end of April Burger King reported the Impossible Burger was enough of a success that they would be rolling it out nation-wide. That national launch happened at the beginning of August—and the brand’s Yscore saw a clear and parallel increase that month. But unlike the initial April spike, Burger King’s scores are staying strong, showing that the addition of the Impossible Whopper to all locations could be giving the brand more long-lasting positive momentum. CNN reports that sales for the brand increased 10% in Q3, which they directly attribute to the Impossible Whopper, and Barclay’s research also shows that foot traffic for Burger King has increase in correlation with the plant-based burger’s announcement and launch.

The menu innovation speaks directly to young consumers’ food interests. When YPulse asked about the food trends that Gen Z and Millennials were most interested in this year, vegan/vegetarian diets were second on the ranking. While the majority of these generations don’t follow a strict plant-based diet, they’re increasingly interested in trying meatless products. Burger King’s willingness to take such a menu risk relatively early on in the trend’s popularity is clearly paying off, with young consumers viewing the brand in a more positive light—and increasing their spending with them as a result.