How Much Gen Z Cares About Online Celebrities, In 5 Stats 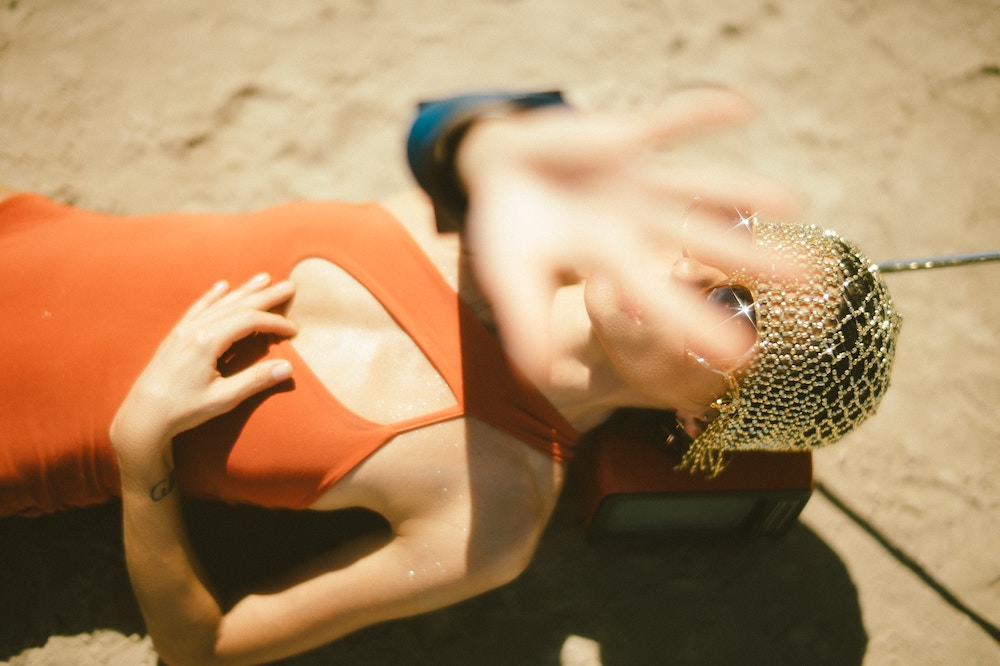 Raised on YouTube and social media, Gen Z are more invested in online celebrities than Millennials. How much do they care about them? These 5 stats tell the story…

When we looked at young consumers’ favorite celebrities, we found a clear generation gap. Gen Z was most likely to name an online celebrity as their favorite famous person, while older Millennials were most likely to name a Hollywood celebrity. This is a generation that has been raised on YouTube and social media; they’re more interested in influencers, vloggers, and Instagrammers than Hollywood stars—and more likely to listen to them. Brands need to be prepared for the massive shifts that Gen Z is bringing to fame, including fragmentation and democratization.

When we look at our recent survey on influencers and celebrities, Gen Z’s ties to online celebrities are clear—especially compared to Millennials. Here are five stats that show just how much they like (and even aspire to be) online stars: 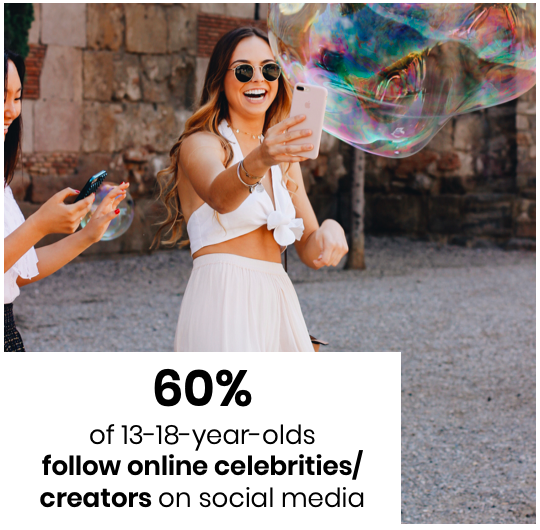 The majority of both generations follow online celebrities (defined as (bloggers, vloggers, YouTubers, Instagrammers, social media stars, etc.) on social media, but Gen Z is more likely to do so, with 60% of 13-18-year-olds saying they follow them versus 54% of 19-37-year-olds. That’s more Gen Zs than follow Hollywood celebrities, musicians, or athletes. When it comes to what kind of online celebrity they’re following, Gen Z is also more likely than Millennials to follow social media personalities, gamers, fashion bloggers/vloggers, beauty influencers, and aspiring musicians. With more younger consumers following online stars online, they’re more likely to be influenced by this type of celebrity, and to care about them—which brings us to… 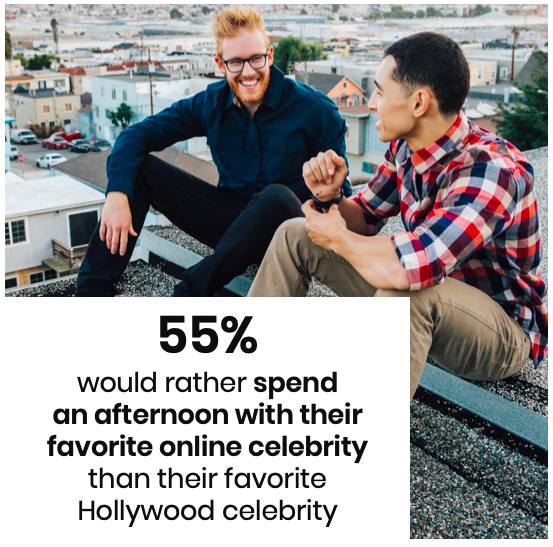 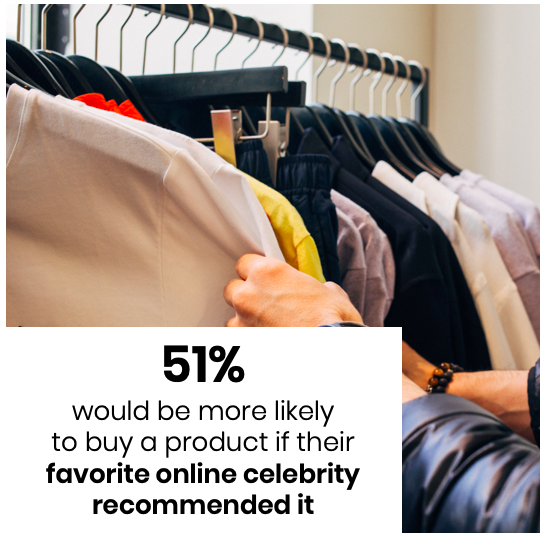 Half would be more likely to buy a product if their favorite online celebrity recommended it.

That exposure and affinity adds up to influence: 51% of Gen Z say that they would be more likely to buy a product because their favorite online celebrity recommended it. Interestingly, they are on par with Millennials here, with 52% of the older generation saying the same—and showing that influencer marketing is still effective with young consumers on a large scale. But 21% of Gen Z say they would be much more likely to buy an online celebrity-endorsed product, versus 15% of Millennials. In other words, online celebs’ influence over Gen Z is a little stronger. About two in five actually have purchased something an online celebrity has spoken about or recommended—and beauty products and clothing top the list of the products they’ve bought because of an influencer. 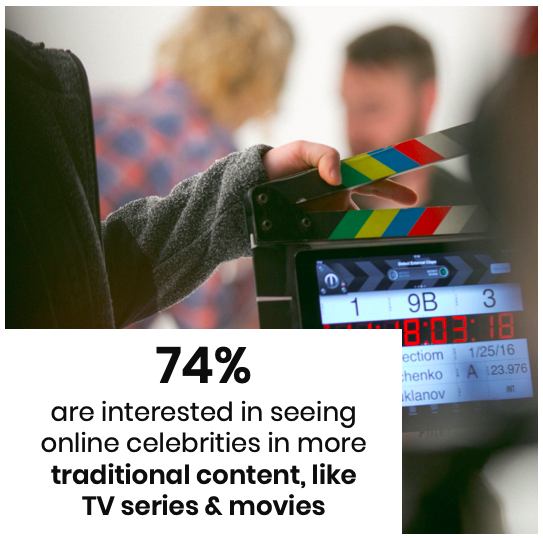 Increasingly, we’re seeing online content being used as fodder for more traditional entertainment—and because of their affinity for online celebrities, Gen Z is open to it. Though they may have gotten to know them through short clips, videos, and photos, 74% of Gen Z say they are interested in seeing online celebrities in more traditional content, like TV series & movies. Currently, young TikTok stars are earning mainstream cred and fans in the wake of their viral notoriety, YouTube star Lilly Singh has her own NBC late show, and Ryan ToysReview has a Nickelodeon show. We’ll continue to see online stars crossover into traditional formats as media brands race to capture their young audiences. 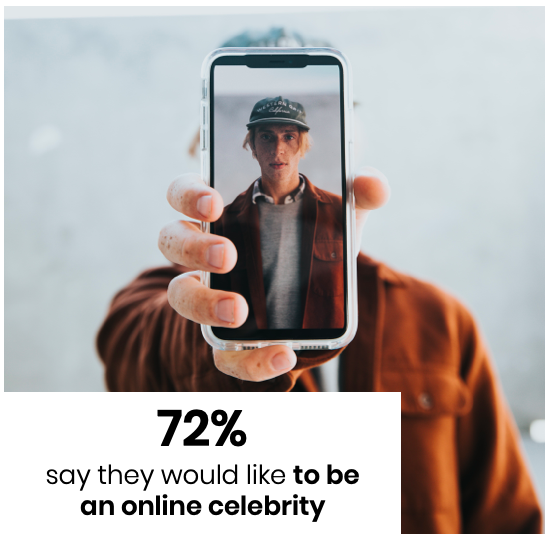 Seven in ten say they would like to be an online celebrity.

They don’t just like online celebrities, many aspire to be one, with 72% of Gen Z saying they would like to be an online celebrity, compared to 55% of Millennials. Gen Z was less likely (56%) to agree they would want to be “a celebrity” without the “online” added, indicating it’s not just fame but the particular fame of a YouTuber or Instagrammer that is most alluring. But those worried about the future of the generation or assuming they all just want to be YouTubers can breath easy: when we look at their goals and aspirations overall, the majority of Gen Z (and Millennials) say that being famous is not important to them.