How are Gen Z and Millennials using their phones? Not the exact same ways. Here’s what Gen Z is doing more than Millennials on their mobile devices each day…

Currently, 92% of Gen Z consumers and 98% of Millennials tell us they have a smartphone—but they’re not using those phones in the exact same ways. Our survey on their mobile and app behavior found that Gen Z looks at their phone more times in a given hour on average, and are more likely to say they’re addicted to their phones. And that’s not all they’re doing differently when it comes to their mobile activity. When we examine what they’re doing on their phones every day, looking at activities from social networking to ordering food and everything in between, the generational differences are clear. In the average day, there are a variety of things that Gen Z is more likely than Millennials to do on their phones.

But before we get to those, there are three things the generations are equally likely to do on their phones every day:

Over eight in ten Gen Zs and Millennials say they’re using their smartphones for messaging every day—and messaging is the top activity young consumers are using their phones for daily. Messaging apps, and group messages, have become an integral part of Gen Z and Millennials’ friendships. According to our Friend Request research, exploring friendship and technology, text messages and chat apps are by far the mode of communication that they’re using to communicate with their group of friends daily, beating out in person, talking on the phone, email, video chat, and social media. So it’s not too surprising that both groups are more likely to be messaging than they are to use social media via their phones daily. But nearly three quarters of both generations report using social networks on their phones daily. The other activity Gen Z and Millennials are equally likely to do on their phones each day is price comparison, with nearly one in five saying they do so on a daily basis—speaking to the price-consciousness and budget awareness of both groups.

But there are far more things that Gen Z are doing on their phones more than Millennials are—and many are entertainment related: 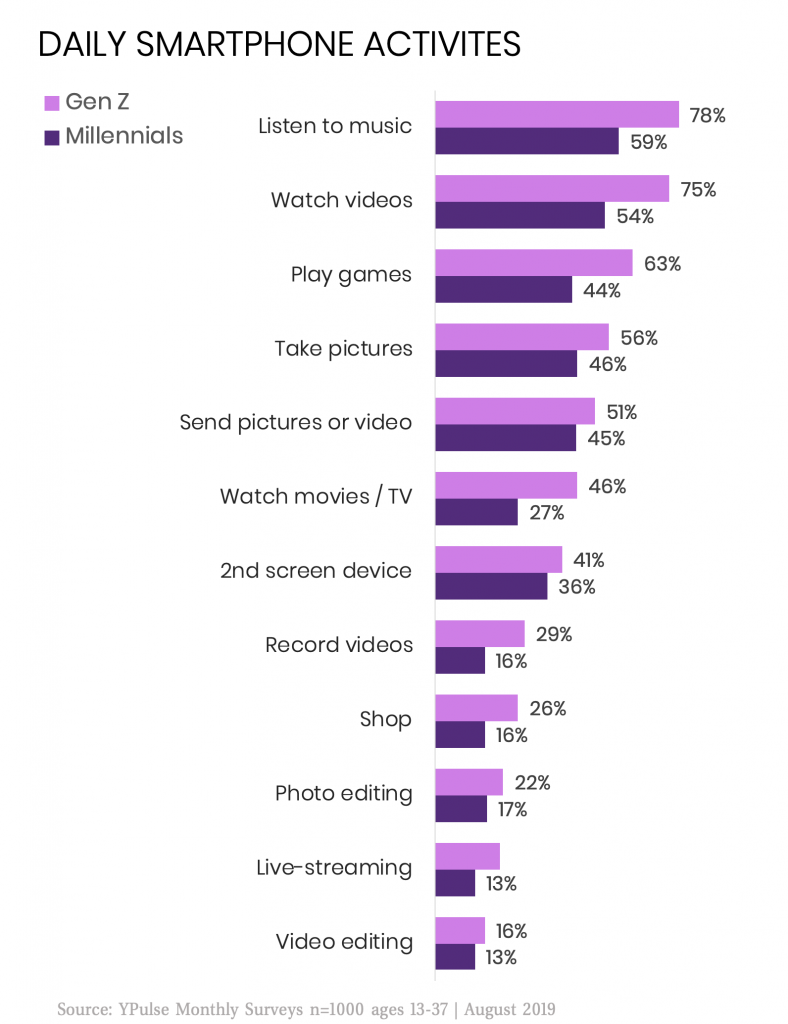 Gen Z is more likely than Millennials to listen to music, watch videos, play games, and watch movies and TV shows on their phones every day. Their tendency to use their phones as an entertainment system, and to do so more than Millennials, aligns with our data on how the younger generation is watching TV and video right now. This daily mobile media consumption is clearly impacting their traditional media consumption: Only 33% of 13-18-year-olds tell us they watch content on TV weekly, and when we ask which screen they spend the MOST time watching weekly, only 24% of Gen Z say TV—compared to 41% of Millennials. Even when they’re not consuming media through their phones, Gen Z is also more likely than Millennials to use their phones as a 2nd screen device daily—using it while also using another device, like a TV.

Many of the other daily mobile activities that Gen Z is more likely to do than Millennials are also media related, but involve the media they’re creating themselves. Gen Z is more likely than Millennials to take pictures, send pictures and videos, record videos, edit photos, and livestream content daily. This all indicates that the younger generation is capturing and sharing more of their lives on their phones, and that doing so is their norm.